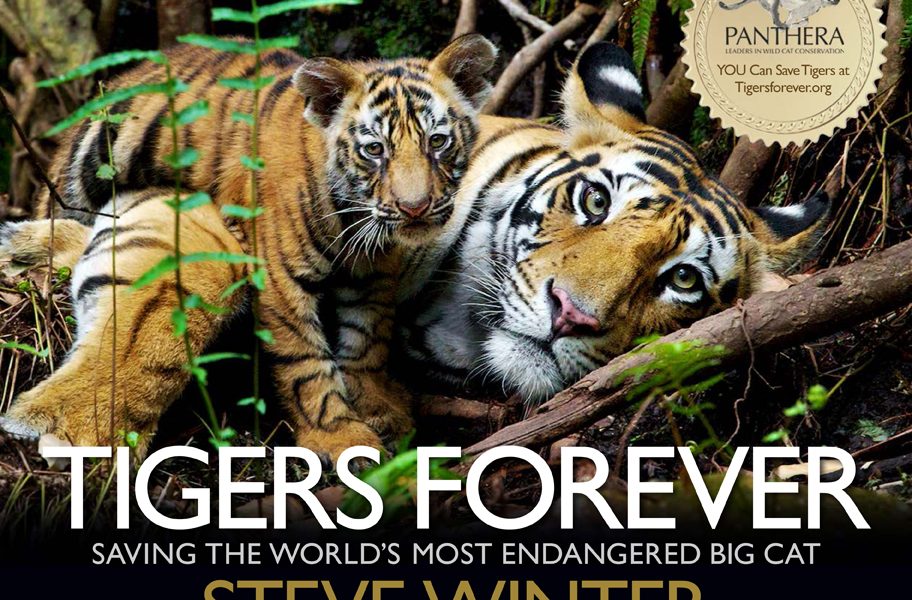 Click any of the photo in this article to enlarge.

Wild tigers have disappeared from 90 percent of their historic range, and their population stands at a tiny fraction of a century ago. WhoWhatWhy science contributor Sharon Guynup collaborated with National Geographic photographer Steve Winter to raise an alarm about the state of this imperiled species in Tigers Forever: Saving the World’s Most Endangered Big Cats (National Geographic Books).

Back in 2003, Winter began a decade spent in Asia’s jungles in search of wild tigers. In 2007, Guynup was researching a story about wildlife poaching in India’s Kaziranga National Park when she glimpsed her first tiger, and began writing regularly about big cats. Writer and photograher joined forces to create this book.

In this excerpt for WhoWhatWhy, Guynup gives voice to Winter’s quest to document the tiger’s magnificence—and tells the tiger’s story: why the cat has been both feared and revered throughout human history, the threats it faces—and the extraordinary efforts to save it.

Tigers have been around for millennia, she writes. But is the end near?

Panthera tigris, the largest of the world’s cats, is the heart and soul of Asia’s jungles. It’s the dominant predator in both the valley and every ecosystem it inhabits, stealthy, walking silent and unseen, like a shadow, but possessing fearsome teeth and claws and a roar that resounds for miles. It’s no wonder tigers have long been feared and worshipped across their range.

For millennia, they’ve stood as iconic symbols of power and courage, woven into culture, religion, folklore, and ritual. Neolithic cave paintings are the earliest existing depictions, images etched into rock walls across the Indian subcontinent some 8,000 years ago.

Asian cultures have deified this cat, bestowing powers beyond those of any worldly animal. In Tibet, tigers held the key to immortality. In 13th century China, tigers protected both the living and the dead by frightening away threatening spirits. In Indochina and elsewhere, many were reluctant to kill them; it was widely believed that when a tiger killed a human, the human’s soul entered and inhabited the cat’s body.

The Hindu goddess Durga vanquished a monster-demon while astride her ferocious mount, a tiger. Legend from various countries describes shamans transforming into tigers to move between worlds or people shape-shifting into werecats to harm others.

Many tribes, including the Naga in Myanmar and India, only killed tigers as part of powerful rituals or on ceremonial occasions. When the Europeans arrived and trophy hunts began, those who helped or acted as guides faced harsh punishment from village elders. But as the fabric of traditional culture unraveled and guns proliferated, tiger slaughter grew common.

What I didn’t realize until I dug into research was that today, tigers hover closer to extinction than any of the big cats. They face a deadly cocktail of threats. With diminishing prey, widespread poaching, and conflict with humans who live too close to their ever shrinking habitat, one of the world’s most iconic species is careening toward the edge.

A century ago, more than 100,000 of these majestic cats roamed Asia’s rainforests, savannas, and mountains. They ranged across 24 nations, from Turkey eastward to Siberia, south through China and Indochina to the tip of Indonesia. They are the national animal of six nations, but have vanished from two of them, North and South Korea.

Only about 3,200 wild tigers survive, and of those, less than a third are breeding females. They’re gone from 93 percent of their historic range; that range shrank by almost half during the first decade of this century.

Tigers hang on in just 13 countries in scraps of habitat sandwiched amid an exploding human population. In 2010, they were declared extinct in Cambodia. (In contrast, at least 4,000 captive tigers are privately owned in the United States alone, living in people’s backyards, lost to the wild and often living miserable, caged lives.)…

Though they’re quickly disappearing from the region, their presence here dates back millions of years. All modern cats originated in Southeast Asia. The great roaring cats, Panthera—a group that includes tigers, lions, leopards, jaguars, and snow leopards—were the first to branch off the cat family tree 10.8 million years ago.

The earliest tiger fossils are two million years old. That ancestor eventually evolved into nine subspecies, slowly adapting to Asia’s various landscapes, prey, and climate. Three of them blinked into extinction over the last 80 years. The Bali tiger died out during the 1940s; the Javan and Caspian tiger both disappeared in the 1970s. Six subspecies remain: the Bengal, Indochinese, Malayan, Sumatran, Amur (Siberian)—and the South-China, which now exists only in captivity, gone from the wild. All are endangered. In 1996, the Sumatran tiger was reclassified as critically endangered, one step from oblivion, and the Indochinese tigers that roam Myanmar and neighboring countries are approaching that same precipice.

The species has always faced challenges. Genetic studies revealed that tigers were almost annihilated 73,000 years ago when a massive volcanic eruption at Lake Toba, Sumatra, wiped out scores of Asian mammals. The species rebounded from just a few individuals to repopulate Asia.

Today, viable breeding populations exist in 42 known locations, or “source sites.” Tigers are in the emergency room, but they’re a resilient species. There is enough remaining habitat to support tigers, and if both the cats and their prey are given boots-on-the-ground protection, there’s hope. But only committed, targeted action and creative strategies will bring them back from the brink…

The time to act is now. Once the last tigers disappear, no longer gliding on velvet paws through the jungle, we cannot bring them back. These men were apprehended in January 2011 while trying to sell a tiger skin near Chandrapur, India. Police received the tip from the Wildlife Protection Society of India, with intelligence from their informant network. They were members of an extended family from a nearby village, ranging in age from 17 to 40. Dara Arista holds a portrait of Sheila, a beloved 18 year-old Sumatran tiger, in front of her cage at Taman Rimbo Zoo in Jambi. Two nights before,  a poacher broke in and killed her in her cage. He was captured on a bus and confessed to killing her for $100. A tiger moves, nearly invisible, through Kaziranga’s tall reeds. Though we tend to think of tigers as a jungle species, they are perfectly adapted to grasslands where their striped camouflage raises the odds for a successful kill. A tiger peers at a camera trap it triggered while night-hunting in the forests of northern Sumatra, Indonesia.

May they all be protected. Shoot the poachers on site when found!

Tigers are wonderful and must be saved and cherished…