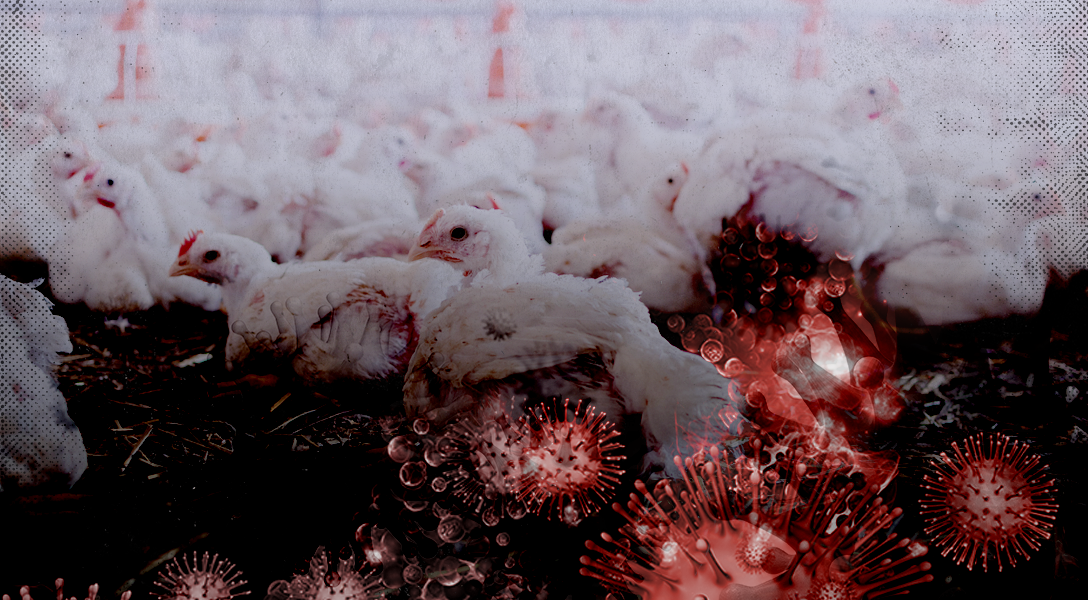 The Next Pandemic May Be Bred on US Farms

While the world races to distribute a vaccine to end the ongoing COVID-19 pandemic, the next zoonotic disease outbreak — able to spread from animals to humans — could be hot on its heels.

China is set to restrict the sale and consumption of wildlife, thought to be the origin of the novel coronavirus. But some experts say pandemic prevention should also focus on the United States, where intensive agricultural practices are breeding grounds for disease.

The threat boils down to American excess. Meat production has increased about 260 percent in the last 50 years. Intensive farms in the US, also known as factory farms or CAFOs (confined animal feeding operations), supply the country’s and the world’s appetite for cheap, plentiful animal protein by crowding thousands of animals into small indoor spaces.

These aren’t fringe practices: Some 90 percent of the world’s meat and 99 percent of US meat comes from factory farms. Poor conditions and stress on the animals means that disease can emerge on the farms and spread through the herd at lightning speed — like COVID-19 in a nightclub.

As Michael Greger, author of Bird Flu: A Virus of Our Own Hatching, explained in an interview  with Vox, “When we overcrowd animals by the thousands, in cramped football-field-size sheds, to lie beak to beak or snout to snout, and there’s stress crippling their immune systems, and there’s ammonia from the decomposing waste burning their lungs, and there’s a lack of fresh air and sunlight — put all these factors together and you have a perfect-storm environment for the emergence and spread of disease.”

Overcrowding not only threatens to “amplify” disease in animals, it also hastens mutation, increasing the likelihood of a jump from animals to human beings.

While the danger of animal-to-human transmission has always existed, factory farms have increased the threat.

“To be able to spread from one animal to the next, the virus or bacteria has to develop an ability to infect the host but not kill it right away, so it can’t be that deadly,” said Michael Martin, professor of epidemiology and biostatistics at the University of California, San Francisco and president of the organization Physicians Against Red Meat (PhARM). “When you pack all the animals together, then it can spread quickly and be deadly.”

Intensification also requires greater frequency of movement of people and vehicles on and off farms, increasing the risk of pathogen transmission to human caretakers.

Staring down the barrel of the current pandemic, it’s easy to forget that the US is no stranger to breeding pandemics of agricultural origin. In 2009, H1H1 broke out from factory pig farms, originally thought to be in Mexico. Subsequent tests traced the virus to an industrial hog farm in Newton Grove, NC, in the late 1990s, where it had circulated and evolved among pigs before crossing to humans.

Swine Flu is just one example. Thanks to the US exporting its factory-farming model across the globe, Asia has seen new bird flu viruses — transmissible to humans — develop since the 1990s. “These new bird flu viruses have been tied to industrialization — the ‘Tysonization’ — of our poultry production,” said Greger. The latest avian flu strain, H5N8, was detected in farms across the globe and in February infected workers in a Russian poultry plant.

US factory farms try to mitigate risk by implementing stringent biosecurity and hygiene measures. Christopher Wolf, professor of Agricultural Economics at Cornell University, told WhoWhatWhy, “The bigger operations tend to have a lot more biosecurity and technology and incentive to root out disease right away because they have more money to lose.”

In swine facilities, for instance, workers have to shower when they go in or out, and are provided with clean clothes to wear while operating the plant. Wolf also noted precautions taken when transporting animals: “If you’re importing live animals, you have to have vet checks and permits and quarantines. It makes it expensive to move them.”

But some biosecurity measures pose health threats of their own. Many farms load their animals with antibiotics, which both prevent disease and facilitate growth. (According to the Union of Concerned Scientists, about 70 percent of all antibiotics are used on farm animals.)

As Martin told WhoWhatWhy, “If you wanted to find a way to promote antibiotic resistance in bacteria, you almost would not be able to find a better way to do it than concentrat[ing] animals together and feeding them antibiotics on a regular basis.” The World Health Organization estimates that 700,000 people die each year because of antiobiotic-resistant microbes.

Disease: The Byproduct of Demand

The demand for meat is itself a driver of disease. Because these large industrialized practices infringe on spaces previously occupied by wildlife, human contact with other species increases. It’s simple supply and demand: Rising consumption of animal protein means raising more animals, more farms, more roads to reach them, and more crops to feed them.

The UN reports that around one-third of croplands are used to produce animal feed, partly driving deforestation. Since 1940, agricultural intensification measures such as dams, irrigation projects, and factory farms have been associated with more than 25 percent of all infectious diseases in humans (and more than 50 percent of zoonotic diseases). In addition to SARS-CoV-2 and bird flu, other zoonotic diseases that have killed humans, like Ebola, MERS, and HIV, are in part a result of wildlife infringement. And studies suggest deforestation and suburbanization of the northeastern United States are responsible for the proliferation of Lyme disease, which infects around 35,000 people in the US each year, though the CDC estimates that there could be ten times as many infections due to underreporting.

In July 2020, Andersen spoke during the launch of the UN’s report on zoonotic diseases and pandemics. Referencing the interplay between human, animal, and environmental health, she admonished, “We were warned that the current pandemic was not a matter of if, but when. And it is a human failing that we predict, but we do not prepare.” The suggestion is that if humankind does not address the ills of intensive farming, the next pandemic is a foregone conclusion.