The High Cost of Lithium Mining for Indigenous Communities

This story by Maya L. Kapoor originally appeared in High Country News and is republished here as part of Covering Climate Now, a global journalism collaboration strengthening coverage of the climate story.

One autumn evening four years ago, Ivan Bender, a Hualapai man in his mid-50s, took a walk with his fluffy brown-and-white Pomeranian, Sierra Mae, to check on the ranchland he tends. Nestled in western Arizona’s Big Sandy River Valley, the ranch protects Ha’ Kamwe’ — hot springs that are sacred to the Hualapai and known today in English as Cofer Hot Springs. As the shadows lengthened, Bender saw something surprising — men working on a nearby hillside.

“I asked them what they were doing,” Bender recalled. “They told me they were drilling.” As it turns out, along with sacred places including the hot springs, ceremony sites, and ancestral burials, the valley also holds an enormous lithium deposit. Now, exploratory work by Australian company Hawkstone Mining threatens those places, and with them, the religious practices of the Hualapai and other Indigenous nations. But this threat is nothing new: Centuries of land expropriation, combined with federal court rulings denying protection to sacred sites, have long devastated Indigenous religious freedom. 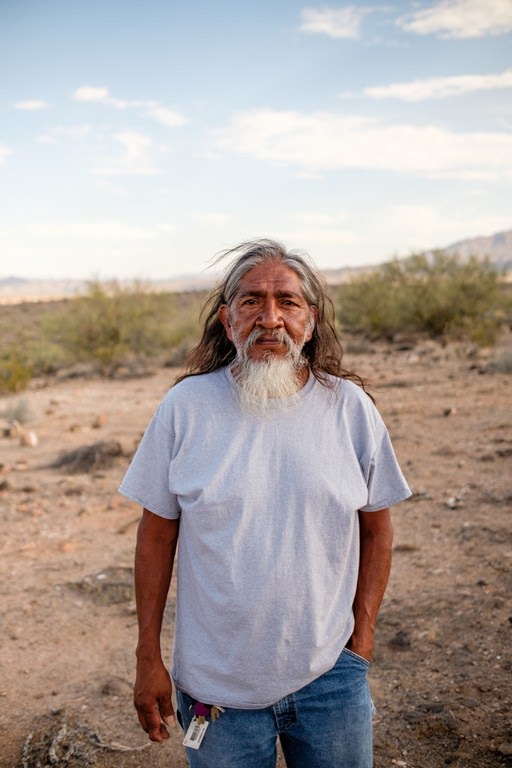 Ivan Bender is the caretaker of the Hualapai Tribe’s Cholla Canyon Ranch and was the first to discover exploratory drilling around the perimeter of the tribe’s property. Photo credit: Roberto (Bear) Guerra / High Country News

Cholla Canyon Ranch, where Bender is the caretaker, includes approximately 360 acres about halfway between Phoenix and Las Vegas, flanked to the west by the lush riparian corridor of Big Sandy River. The valley is part of an ancient salt route connecting tribes from as far north as central Utah to communities in Baja California and along the Pacific Coast, documented in the songs and oral traditions of many Indigenous nations.

“There are stories about that land and what it represents to the Hualapai Tribe,” Bender said. “To me, it holds a really, really sacred valley of life in general.” According to tribal council member Richard Powskey, who directs the Hualapai Natural Resources Department, the Hualapai harvest native plant materials along the river corridor for everything from cradle boards to drums. 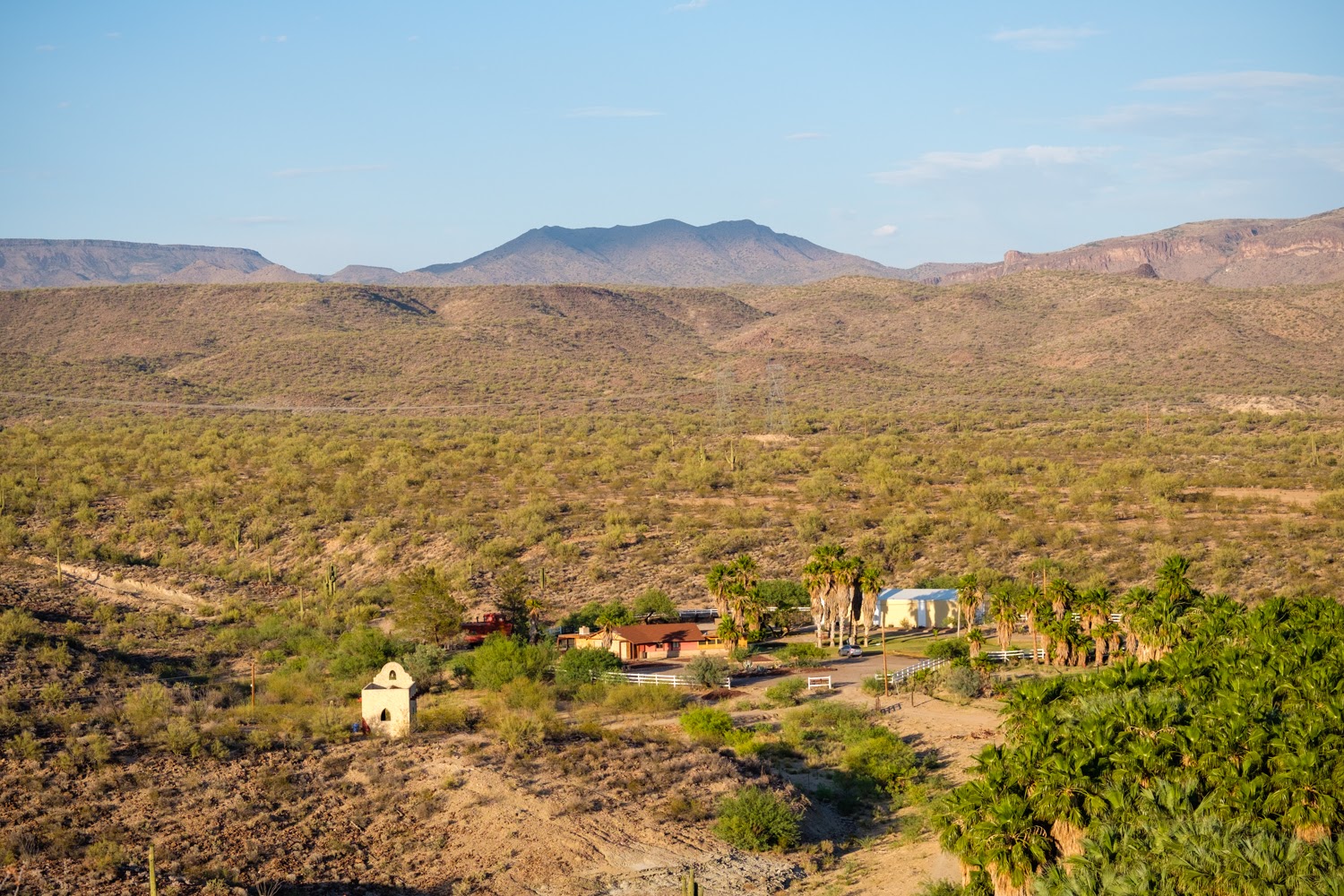 The mining company (USA Lithium Ltd., which has since been acquired by Hawkstone Mining Ltd.) hadn’t told the Hualapai Tribe it was searching for lithium on nearby Bureau of Land Management lands. That evening, Bender was shocked to see the destruction taking place. The company eventually bulldozed a network of roads, drilling nearly 50 test wells more than 300 feet deep in the sacred landscape.

This summer, Hawkstone plans to triple its exploratory drilling, almost encircling Canyon Ranch and the springs it protects. In the next few years, Hawkstone hopes to break ground on an open-pit mine and dig an underground slurry to pipe the ore about 50 miles to a plant in Kingman, AZ, where it will use sulfuric acid to extract the lithium. Lithium, which is listed as a critical mineral, is crucial for reaching the Biden administration’s goal of replacing gas-guzzling vehicles with electric vehicles, and Big Sandy Valley is relatively close to the Tesla factory in Nevada. Altogether, Hawkstone has mining rights on more than 5,000 acres of public land in Arizona for this project. Yet tribes whose sacred sites are at risk have almost no say in its decisions.

Public lands from Bears Ears to Oak Flat contain countless areas of cultural and religious importance. But when tribes have gone to court to protect these sites — and their own religious freedom — they’ve consistently lost. Courts have narrowly interpreted what counts as a religious burden for tribes, largely to preserve the federal government’s ability to use public lands as it sees fit. 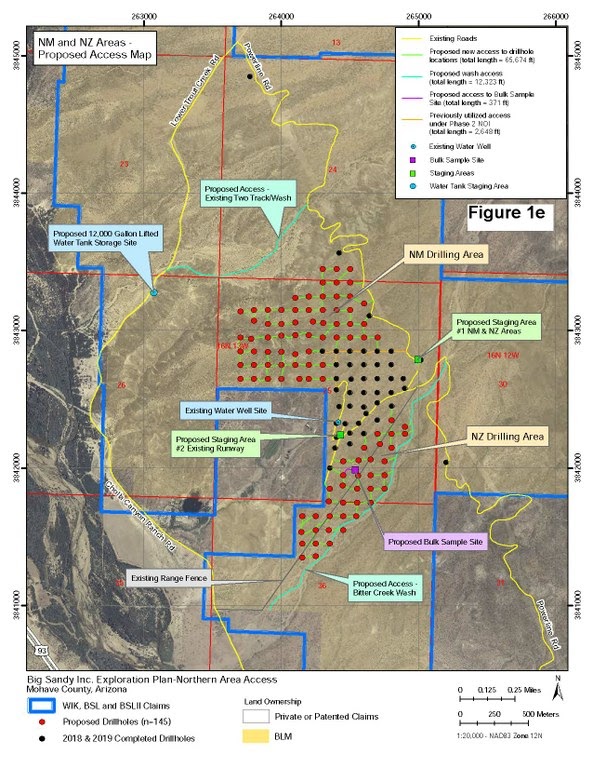 The roots of this policy are centuries deep. In the landmark 1823 case Johnson v. M’Intosh, the Supreme Court ruled that Indigenous people could not sell land to private owners in the United States because they did not own it. Instead, Christian colonizers were the rightful owners, based on the Spanish colonial “Doctrine of Discovery,” a racist and anti-Indigenous policy holding that non-Christian, non-European societies were inferior and that Christian European nations had a superior right to all land.

“Part of what justified the claiming of the land was that [colonizers] would teach the Indigenous people Christianity,” Michalyn Steele, an Indian law expert at Brigham Young University and member of the Seneca Nation of Indians, said. “If they rejected Christianity, then they essentially forfeited their rights to the land and resources.”

More recently, courts have continued to weaken protections for Indigenous religious freedom on public lands. In the precedent-setting 1988 case Lyng v. Northwest Indian Cemetery Protective Association, the Supreme Court ruled that the Forest Service could widen a logging road in Northern California’s Six Rivers National Forest, even though it would destroy a region that was essential to the religious beliefs of tribes including the Yurok, Carok, and Tolowa. The Supreme Court reasoned that although the location might be utterly wrecked, that destruction did not violate the Constitution, because it would not force tribal members to violate their religious beliefs or punish them for practicing their religions.

“Even assuming that the Government’s actions here will virtually destroy the Indians’ ability to practice their religion, the Constitution simply does not provide a principle that could justify upholding respondents’ legal claims,” Justice Sandra Day O’Connor wrote in the majority opinion.

The court ruled, in part, to avoid granting tribes broad control over their ancestral lands through the exercise of their religious freedom. “Whatever rights the Indians may have to the use of the area … those rights do not divest the Government of its rights to use what is, after all, its land,” the ruling said.

Though Congress partially protected that sacred region by adding it to the Siskiyou Wilderness Area, the Lyng ruling still reverberates across Indian Country today, creating what Stephanie Barclay, the director of the University of Notre Dame’s Religious Liberty Institute and a former litigator at the Becket Fund for Religious Liberty, calls a “double standard” in how Indigenous sacred sites are treated.

Barclay compared the situation of tribes such as the Hualapai, which rely on the federal government to access sacred sites, to that of Jewish prisoners who adhere to a kosher diet, or Sikh members of the military whose faith forbids them to cut their hair. In all of these cases, religious freedoms are controlled by the government. But, Barclay said, tribal members don’t get the same religious protections.

“To me, it holds a really, really sacred valley of life in general.” — Ivan Bender

“If the government is unwilling to accommodate an access for different Native peoples so that they can practice their religion in those sacred sites, then it won’t happen,” she said. But the Supreme Court has narrowly interpreted religious protection of Indigenous sacred sites on public lands, to the point of allowing wholesale destruction.

In a recent Harvard Law Review article, Steele and Barclay urge the federal government to protect Indigenous religious practices as one of its trust responsibilities and to be very cautious about allowing destruction of sacred sites on public lands.

As things stand, state and federal agencies may permit irreversible damage with little input from affected Indigenous communities. Indeed, communication between the BLM and Hualapai Tribe about Hawkstone’s Big Sandy River Valley lithium impacts has been almost nonexistent. Although the BLM invited the Hualapai Tribe to consult with the agency in June 2020 about Hawkstone’s exploration plans, the agency later rebuffed the tribe’s request to be a coordinating agency on the project. It also rejected the suggestion that a tribal elder walk through the area and educate the agency about the cultural resources and history that mining might imperil. 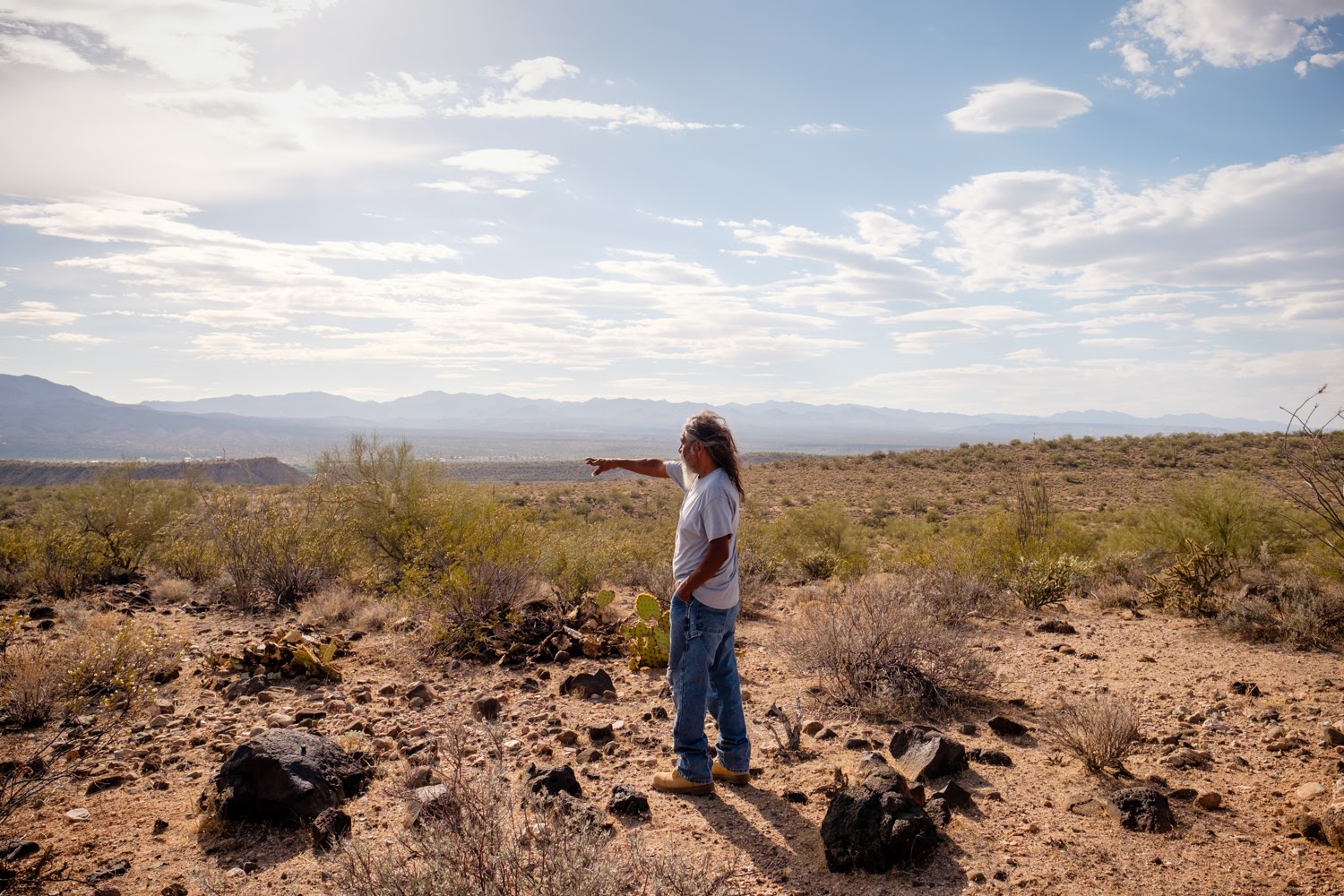 The BLM said that it found only four cultural resource sites in the proposed drilling area. Of those, it said it would attempt to avoid one, which was eligible for protection under the National Historic Preservation Act. Meanwhile, in its publicly available environmental assessment, the agency stated that effects to Native American religious concerns or traditional values were “to be determined,” and that it was consulting with the Hualapai Tribe, among others. As of this writing, BLM staff had neither agreed to an interview nor responded to written questions from High Country News.

For its part, in March, Hawkstone said that “All (I)ndigenous title is cleared and there are no other known historical or environmentally sensitive areas.” Hawkstone’s report ignores the fact that even when tribes lack legal title to their traditional lands, those spaces still hold religious and cultural importance.

When asked for comment, Doug Pitts, a US advisor at Hawkstone Mining, emailed HCN that, given the early stage of the project, “We do not feel a discussion on the project is worthwhile at this time.”

Even without a clear legal path forward, the Hualapai Tribe has not given up on protecting its religious practices from lithium exploration. Nor is it alone: In April, the Inter Tribal Association of Arizona, representing 21 nations including the Hualapai, passed a resolution objecting to the lithium mining, calling the BLM’s environmental analysis “grossly insufficient.” Recently, the BLM agreed to extend the comment period until June 10. But Council member Powskey pointed out that during the Standing Rock protests against the Dakota Access Pipeline — which in part concerned the destruction of burials — the authorities’ response was violent, and tribal nations, for a long while, were the only ones who seemed to care. And in the end, the pipeline was built. 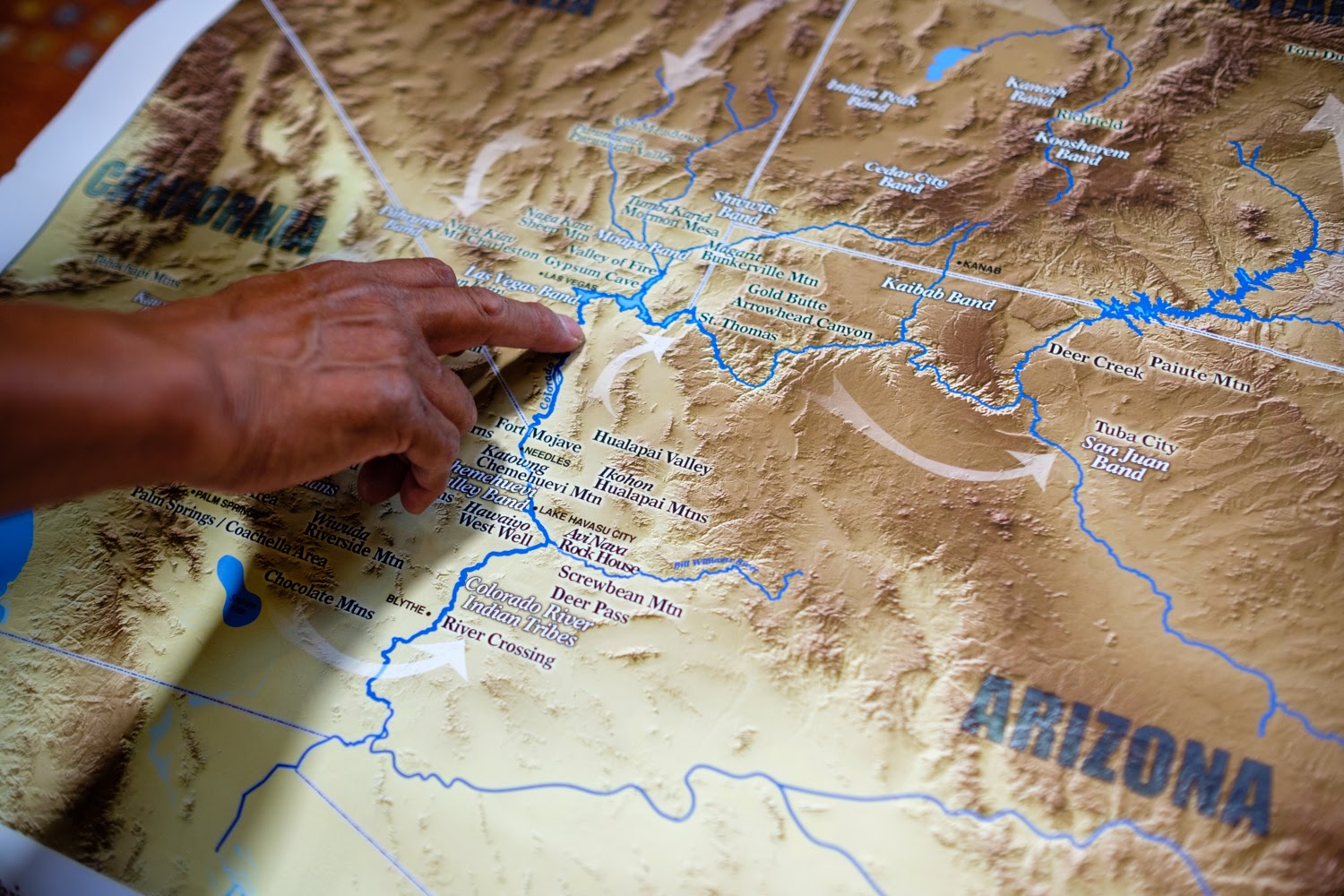 Big Sandy is not the first battle the Hualapai have fought to protect sacred landscapes in this remote corner of Arizona, where wind turbines, gold mines, and other private interests already have destroyed culturally important places — and it won’t be the last. “You know, there’s more to come,” Powskey said.

Meanwhile, the likelihood of more lithium exploration around the ranch upsets caretaker Ivan Bender. The double standard in how Indigenous sacred sites are treated galls him.

“They come in here and desecrate your sacred land,” he said. “Would they appreciate me if I go to Arlington Cemetery and build me a sweat lodge and have me a sweat on that land?” he asked, comparing the valley to another site considered sacred. “I’d rather they go somewhere else and leave history alone.” 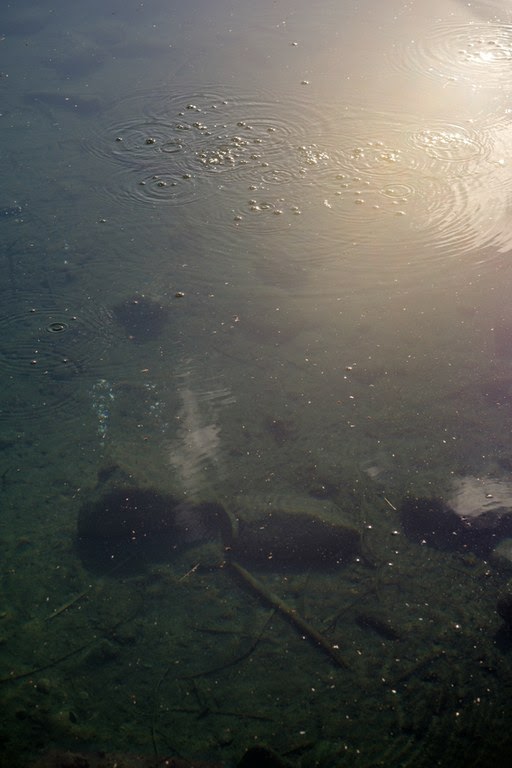 The tribe is concerned that drilling or mining on nearby BLM land risks destroying or contaminating the springs. Photo credit: Roberto (Bear) Guerra / High Country News

The tribe is concerned that drilling or mining on nearby BLM land risks destroying or contaminating the springs.