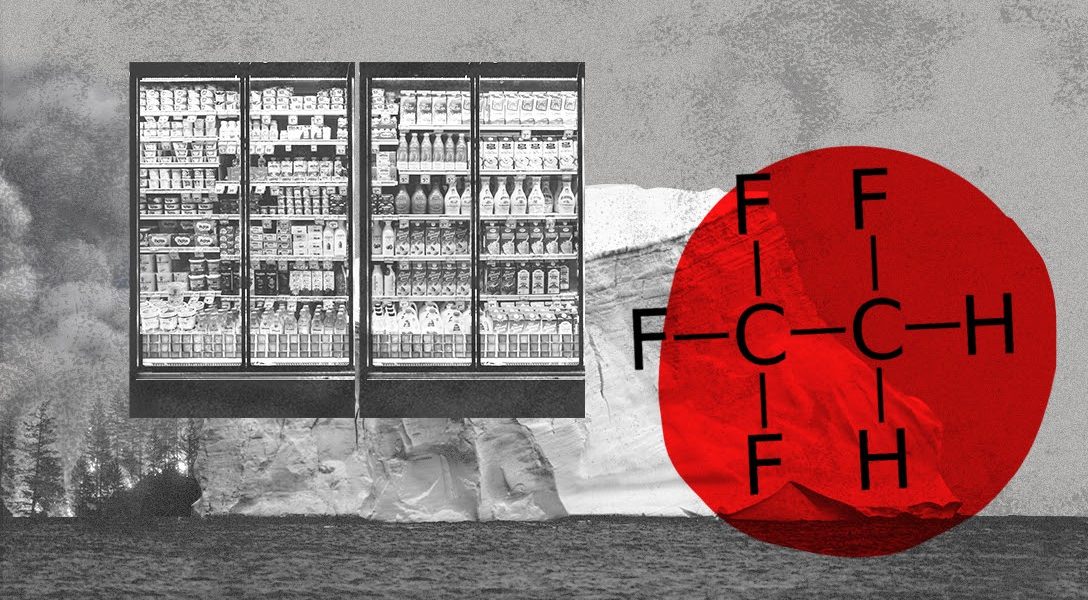 Some Grocers Are Far From Green

What appeared on the display of the citizen investigator’s infrared camera looked ominous: wafts of black smoke invisible to the naked eye. The hand-held leak detector kept sounding its alarm in rapid beeps that warned of escaping refrigerant gas. Other shoppers at the Giant Food supermarket, one of many in the Washington, DC, metropolitan area, strolled unaware down the store’s freezer aisle. The vapor wouldn’t hurt their health directly but would contribute to climate change; it was a thousand times more potent than carbon dioxide at trapping the Earth’s heat.

The finding is just one data point in a mid-February report by the nonprofit Environmental Investigation Agency (EIA). It found that more than half the grocery stores sampled in the greater Washington, DC, area leaked hydrofluorocarbons (HFCs), greenhouse gases far more damaging than carbon dioxide. Left unchecked, leaks in the 38,000-odd supermarkets across the US would be the equivalent of burning an additional 49 billion pounds of coal each year.

HFCs are widely used as cooling agents in air conditioning and refrigeration. They replaced their chlorinated cousins, CFCs and HCFCs, when those were phased out globally under the 1987 Montreal Protocol because they ate holes in the ozone layer. At the time, HFCs were seen as a convenient substitute; they behaved like their predecessors in the machinery, so they didn’t require an expensive overhaul of already built cooling equipment.

Although HFCs leave the ozone layer intact, they trap more heat in the atmosphere, pound for pound, than carbon dioxide — between 1,500 to 4,000 times, in the case of R134a and R404A, refrigerants commonly used in supermarkets. If global HFC emissions continue at the current rate, they would heat the planet by up to an additional 0.9 degrees Fahrenheit by the end of this century. Most leaks registered between two and 10 parts per million, which an instructional video for one of the detectors calls significant enough to necessitate “looking in earnest for what might be a major leak.” Gases quickly disperse into the air and grocery aisles, so they appear less concentrated than they might be at their source, but they are no less damaging to the atmosphere.

“Any of those leaks we detected could potentially be major leaks and would warrant further response from that company,” said Christina Starr, senior policy analyst at the EIA. Although the EIA staffers did not measure how much gas escaped over time, they found that leaks persisted in a few stores which they revisited after several months, indicating inadequate or nonexistent leak inspection and repair.

In addition, the EIA stressed that the leaks were likely undercounted because investigators couldn’t test areas beyond the sales floor. The US Environmental Protection Agency (EPA) estimates that only one-fifth of all leaks in supermarkets occur in the display cases open to customers. The rest are hidden in refrigerant storage tanks, walk-in coolers, and other appliances accessible only to supermarket staff.

Ted Gartland, who for more than 30 years has advised grocery retailers on how best to detect, track, and cut refrigerant emissions, explained just how commonplace coolant leaks in supermarkets are. He likened refrigeration blueprints to the human cardiovascular or central nervous system: Miles of piping running through grocery aisles are connected by countless valves and soldered joints, all supervised by a specialized computer much like a brain. This turns persistent leaks in the farthest reaches of the store into a traceable event on a computer screen — for grocers who can afford such a system.

Compressors in the back of the store might be vibrating a bit too hard. Fans in condensers on the rooftop might be slightly misaligned. Over time, each small disturbance turns the piping’s weak points into leak points. Most damaging of all are defrosting cycles that run several times a day to get rid of frost on the pipes. “It creates a tremendous amount of stress on [the pipes] because it’s expanding and contracting them,” said Gartland. “Over time, with age, they are highly prone to leaks.”

The EPA estimates that supermarkets leak 25 percent of their refrigerants each year, which the EIA says equals the emissions of more than 11 million gas-fueled cars.

Describing the current regulatory landscape, Starr said, “There’s no regulation that says they have to ever inspect or repair any leak of an HFC refrigerant in any supermarket in any amount. There is nothing.”

That is about to change. The EIA’s investigation adds to the attention HFCs received in Congress late last year, when lawmakers passed the American Innovation and Manufacturing (AIM) Act, tucked into the 2021 omnibus spending bill. The act calls on the EPA to lead a nationwide phasedown of HFC refrigerants by 85 percent over the next 15 years. Users will be pressured to transition to alternatives that are less damaging to the environment, such as ammonia, carbon dioxide, and propane.

That’s the big picture, but eventually the EPA would also regulate how refrigerant leaks are tracked and fixed. Those controls were put in place in 2016, when Obama’s EPA extended maintenance rules for cooling equipment to cover HFCs in addition to other ozone-depleting substances. The rules required the basics: inspecting periodically, tracking emissions, repairing large leaks, and retrofitting or retiring faulty equipment.

Enter Donald Trump, who rescinded the rule months before the end of his presidency. His administration also dragged its feet on ratifying the Kigali Amendment to the Montreal Protocol, which calls on signatories from around the world to cut HFC emissions by 80 percent by 2045. The Obama administration had already signed the amendment, but Trump sidelined its ratification. President Joe Biden, in his first week in office, directed his administration to send the amendment to the Senate for its advice and consent, a prerequisite for ratification.

The AIM Act left the door open to accelerating the phasedown if emerging refrigeration technologies allow a faster transition, as happened during the phaseout of ozone-depleting substances. Several chemical manufacturers, among them DuPont’s spinoff Chemours, are prepared to supply HFC alternatives. A speed-up would find ready support from the coolant industry and environmental groups alike, whose members testified before Congress about the billions of dollars in economic benefits and tens of thousands of new jobs they expect to come from producing refrigerant alternatives and the equipment that uses them.

Some US grocers have already taken steps to rid their stores of HFC refrigerants and preempt the pressure that will soon catch up to their competitors. About 600 supermarkets use far less potent carbon dioxide to cool their stores. Others have partnered with the EPA’s GreenChill program, an information-sharing hub helping grocers reduce emissions and upgrade refrigerant technology. GreenChill partners typically cut coolant leaks by half, along with the costs that come with being wasteful.

In the absence of current HFC controls, some stores are acting on their commitment to kicking HFCs; others are stuck professing their intentions. Walmart may be among the second group. Partners in EPA’s GreenChill program pledge to be free of any Clean Air Act violations and to reduce yearly refrigerant emissions company-wide. By 2019, partnership had grown to 26 companies encompassing 12,600 stores — one-third of the supermarket industry. Photo credit: EPA PDF

Although the company recently pledged it would transition its stores to low-impact coolants by 2040, its track record is spotty. The chain took part in a 2015 resolution by the Consumer Goods Forum to phase out HFCs entirely, starting that year. Yet Walmart’s self-reports to the Carbon Disclosure Project, a nonprofit that encourages companies to disclose their environmental impact, show that its HFC emissions since 2015 grew faster than its number of stores.

A Walmart spokesperson acknowledged that only the chain’s 150 distribution centers run on low-impact alternatives, not its 4,700 US stores. Those are supposed to transition starting in 2025, near the time when the national phasedown will start kicking into gear.

Other large companies show that HFC withdrawal is possible, even with a smaller profit margin than Walmart’s. ALDI, the German chain that, by 2022, plans to have the third-largest fleet of grocery stores in the US, leads the way with more than 300 HFC-free stores and others to come. ALDI is also part of the EPA’s GreenChill program.

High-grossing retailers, such as Walmart and ALDI, have the luxury of choice. Smaller, independent stores often operate on razor-thin profit margins and don’t have the means or know-how to act on leaks in their system.

“The problem is that a lot of them don’t know that they can stop leakage,” Gartland said. “If you have a really successful grocer that’s making a lot of money, they can afford to make sure that they have good systems and good policies in place to fix things. But then you go to an independent grocery store. They may not even know this stuff exists.”

Gartland suggests that smaller grocers get involved in programs like GreenChill, that share best practices and cut costs. Something as simple as using glass doors for display cases instead of leaving them face-open could shrink the electricity bill to one-tenth its original cost. “It’s real money,” he points out. “It’s huge.”

“Small, upfront differences in cost that achieve substantial reductions in energy consumption pay for themselves over time, typically in multiples,” said Danielle Vogel, founder of Glen’s Garden Market in Washington, DC, an independent grocery with a mission to fight climate change. As a former policy advisor to Congress and litigator enforcing the Clean Air Act, Vogel knows how to operate sustainably. Through community-building initiatives at Glen’s, she passes her expertise on to other local food businesses that share her values.

“When it comes to refrigeration system maintenance, the key is diligence,” said Vogel. Temperature alarms and daily logs should complement routine maintenance, she pointed out, and any efficiency-increasing retrofits, even if they’re small, should happen as soon as new equipment rolls into the store. “Here’s the bottom line: the most environmentally efficient option is usually the most cost-efficient option.”

Starr and the EIA support the same diligence, one that encourages individual corporate action based on the best practices and options for refrigeration. Starr urges stores to think in the long term, with the HFC phasedown in mind. “Those supermarket systems, once you install a new one, it has a 20-year lifetime,” she noted. “You should really be planning in a 20-year time horizon right now as a company.”

That time horizon already seems dictated by the AIM Act and the expected ratification of the Kigali Amendment. The EPA will release its first set of rules guiding the phasedown by the end of this year.

Until then, Starr said, “We’re trying to crowdsource information from people all over the country to create a database of stores and what [refrigerant] they’re using.” Making that information public, she hopes, will put pressure on chains, like Walmart and its competitors. The EIA “would love to see more consumer activism around this topic.”

Activism can be as simple as taking a picture of the refrigerant label in the freezer aisle and sending it to the EIA. Labels, located inside display cases, list one or more refrigerants, each beginning with an R followed by a short string of numbers. The EIA adds all submissions it receives to an interactive map on its website.