Damage from hail scales with its size: Bigger hailstones mean more severe impacts. (Hand size varies by individual, so here’s a suggestion: Please be sure to include a ruler if you report hail!). Photo credit: Ted / Flickr (CC BY-SA 2.0)
Environment

Severe Hailstorms Are Costly and Hard to Predict

This story by Becca Dzombak originally appeared in Eos and is republished here as part of Covering Climate Now, a global journalism collaboration strengthening coverage of the climate story.

In October 2010, severe thunderstorms pummeled the desert city of Phoenix, AZ, with multiple tornadoes and massive hailstones up to 5 centimeters in diameter. In a few short hours, the storm exacted a heavy toll in the form of $2.7 billion of property damage almost entirely the result of damaged cars, broken windows, and destroyed roofs from the onslaught of hail.

Phoenix is not alone. Hailstorms are one of the costliest natural hazards for much of the world on a year-to-year basis. In the United States, hailstorms result in around $10 billion in losses every year. They are also one of the hardest events to predict, even for a typical 3-day weather forecast — let alone on the decades-long scale of climate change.

Despite the urgent economic incentive, scientists have long struggled to produce accurate predictions for when and where severe hail will strike. A new review, powered by a global team of hail experts, is hoping to shed light on the complicated problem of hail prediction. The paper, published in Nature Reviews Earth and Environment in February, took a close look at the available hail research from across the globe with the goal of defining current hail patterns and predicting whether climate change could make severe hail more common.

Hail needs three ingredients to form: convection (warm air rising, cold air falling), moisture in the air, and different wind speeds on the ground and high in the atmosphere. Each of these ingredients needs to be just right to produce conditions in which hail can form, and even then, there’s no guarantee that hail will fall to the ground before melting.

“The real problem that we come to is that even when the atmosphere looks like it really wants to produce hail, it’s actually quite rare that it does,” said Tim Raupach, a postdoctoral climate scientist at the University of New South Wales in Australia and lead author of the review. Still, modeling those “ingredients” is the best approach modelers currently have.

Unless hailstones happen to hit a hail observation pad or get detected by radar, hail data typically consist of individual people reporting hail … and people, as a whole, are not all that reliable.

The rarity of actually getting hail creates what data scientist Michael Tippett calls the “double whammy” of poor data collection: Hailstorms are typically both small in scale and short in duration, so they can be hard to observe. Tippett is an associate professor of applied physics at Columbia University who was not involved in the new study. Unless hailstones happen to hit a hail observation pad or get picked up by radar, he said, hail data typically consist of individual people reporting hail they experience. It turns out that people, as a whole, are not all that reliable. Even the best hail reporting data can have major flaws.

“The problem you get with socially sourced data is that, in general, people overestimate the size of hail,” Raupach said. Crowdsourced reports may simply be a photo of hail in someone’s hand, which makes it impossible to accurately measure it. (“Everyone’s hand is a different size,” said Julian Brimelow, a physical scientist at Environment and Climate Change Canada who was not involved in the new study.)

Reports of hail also cluster in places where people tend to be when a storm hits, like on roads and in cities. Hail records tend to span a short time period, cover only a small area, or contain human biases that make the data difficult to use for scientific modeling. Many records come from insurance reports, which aren’t collected for scientific weather analysis. The result is “a mishmash of standards” for hail reporting, Brimelow said. “And that varies between countries and through time.”

“For things like climate change, we need high-quality, long records,” Tippett said. “So even if we put hail pads out everywhere, it’s like, okay, now let’s wait 40 years. That’s why the ‘ingredients’ modeling approach is attractive. We think we can make reasonable estimates of these large-scale variables and at least get an indirect idea of how they’re changing.”

“We know very little about hailstorms in part because they are such small-scale phenomena,” said Olivia Romppainen-Martius, a coauthor of the review and a climate scientist at the University of Bern. “It is only just now that people are realizing that there’s a lack of data and that we need to invest some time and effort into gathering [them]. We will need [them] to verify our models against observations.” 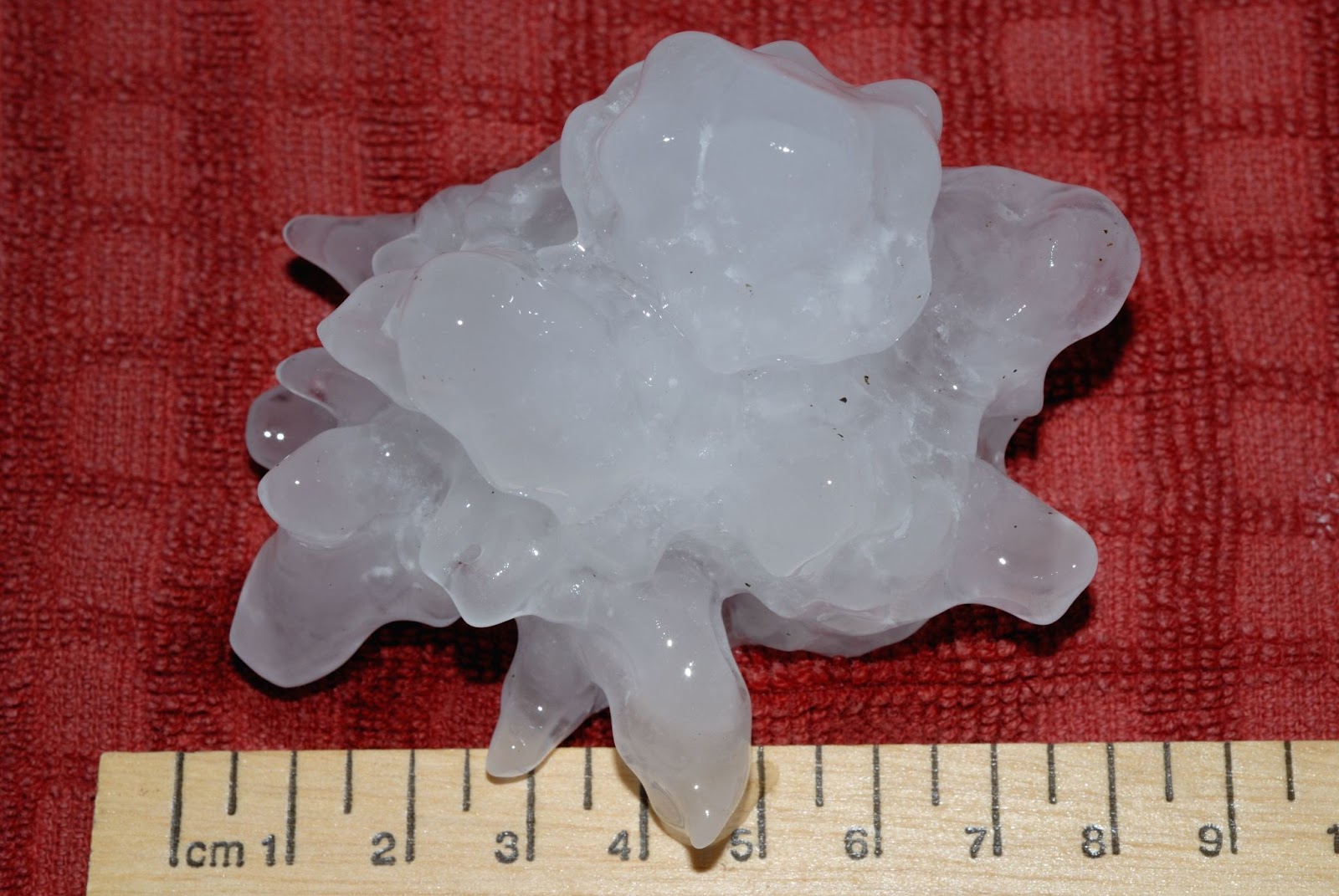 To make sense of the “mishmash of data,” Raupach and his team combed through all of those records and attempted to summarize broad trends for every continent except Antarctica. What they found was far from clear.

“You sometimes get conflicting results on two weather stations just a few kilometers apart,” Raupach said. “So we tried to take a step back and say, for each region, what direction are the results generally pointing in? I didn’t expect to see such variability in the trends on such a small scale.”

Although the results were often in conflict — for instance, different sources for the United States reflected increased, decreased, and no change in hail — the team was still able to glean a few important takeaways.

Because the planet is getting warmer, the odds are generally higher that a hailstone will melt before it ever dings your car. … But the hailstones that do make it down may be larger.

Scientists predict that severe convective storms are becoming more likely in our warming climate, so storms with the right mixture of atmospheric ingredients for hail are more likely to form. However, because the planet is getting warmer, the odds are generally higher that a hailstone will melt before it ever dings your car. On its own, that sounds like good news. But the hailstones that do make it down may be larger, like a meteorite that’s big enough to make it through the atmosphere without burning up completely. That’s a concern for insurance companies and farmers, whose crops can be damaged by even small hail.

“Hail severity really comes down to size: If it’s bigger, it can do more damage,” said Raupach.

Although the study was unable to pinpoint areas where hailstorms could be more frequent, it revealed important trends and data gaps and laid the groundwork for better hail prediction — and international collaborations on the subject.

“They did an excellent job synthesizing all that information,” Brimelow said. “In certain areas, there may have been conflicting signals…. It really does boil down, to a large extent, to having better data.”

Forming a global team helps with that. “We had sources from various regions around the world contributing their local knowledge,” Romppainen-Martius said. Raupach echoed that sentiment. “We tried to get someone from every region we were covering, and we ended up with this great team. It was a big, collaborative effort.”