Sometimes all it takes is a single photograph to change someone’s mind or inspire them to take action. For Catherine Collins and her husband Douglas Frantz, that was a photo of a yardstick plunged 32 inches into filth below a salmon farm near Port Mouton, Nova Scotia.

It led the two investigative journalists to take a deep dive into the salmon-farming industry and its dirty business. The result is their newly published book Salmon Wars: The Dark Underbelly of Our Favorite Fish.

Collins and Frantz, who are also the authors of several other nonfiction books, write about how salmon farming exploded into a $20 billion industry and why that threatens wild salmon, coastal ecosystems, and unsuspecting consumers.

There are more than a few descriptions in the book that may leave readers with searing mental images. Here’s one: Sea lice on farmed salmon can number in the hundreds on a single fish, “so numerous that at some fish processing plants, workers use Shop-Vacs to remove them from incoming salmon.”

In an interview with The Revelator, Collins and Frantz explain the threats posed to wildlife, what happens to scientists and activists who challenge the industry, and whether land-based salmon rearing is a better alternative. 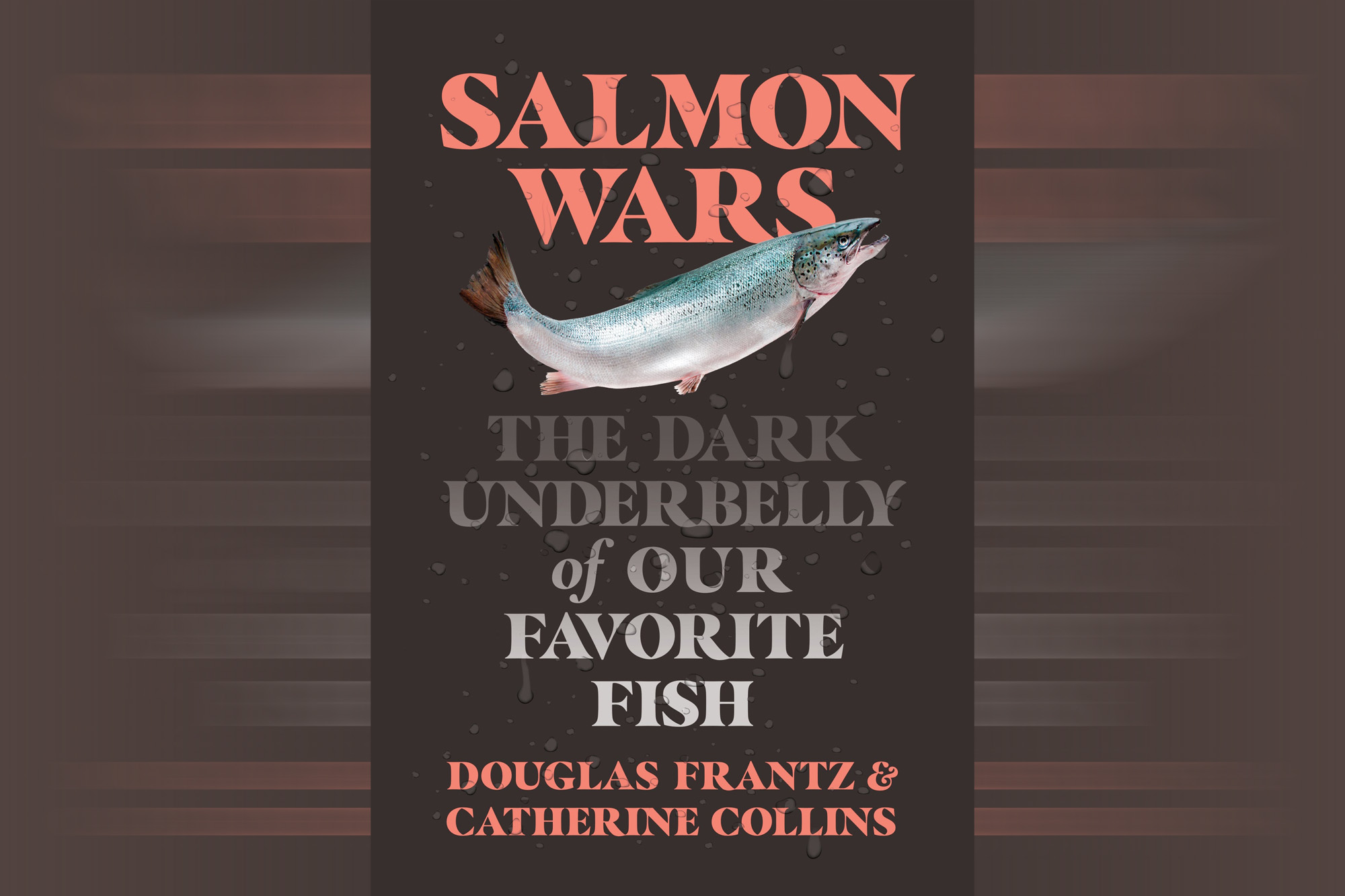 Q: Why did you decide to write this book?

Catherine Collins: Salmon Wars may seem like an odd topic for us because neither one of us is an angler, a marine biologist, or even an environmental activist. Instead, we’re like our potential readers — simply people doing our best to eat healthy and responsibly.

That said, we do have connections to the topic that not everyone will have. My father was an avid fly fisherman. For years, wild-caught Atlantic salmon was served for special occasions at our house. Sadly, our children have never known that pleasure.

Our view of salmon farms was shaped initially by a small farm that we saw go into the water not far from my parents’ cottage on the South Shore of Nova Scotia in the early 1990s. At first, my parents were intrigued. They hoped that aquaculture might take some of the pressure off the dwindling numbers of wild Atlantic salmon. But they realized quickly, as the trash piled up on the shoreline and the eel grass on the seabed below the farm died, that the new technology was not the answer. In fact, it could represent a new threat to wild salmon.

Doug Frantz: Fast forward a couple decades. In January 2020, we went to a public meeting in Mahone Bay, Nova Scotia, a few minutes from our home. A group called the Twin Bays Coalition had sounded an alarm about plans by two multinational salmon-farming companies to locate more than 20 new open-net-pen farms along our coast.

By then, salmon farming had grown into a $20 billion industry, and so had evidence of environmental damage from open-net farms. About 400 other people crowded into the community hall and spilled into the corridors that day to hear warnings from environmentalists, lobster fishers, businesspeople, and ordinary folks.

We have spent our careers investigating and reporting for newspapers, government, and law

firms. So we did what we do — we investigated.

We were surprised, and continue to be surprised, by how little people know about the salmon they’re buying in markets or eating in restaurants. Honestly, smart people have no idea about the environmental harm caused by open-net salmon farms or the potential health risks from eating fish that might contain contaminants. This is one of the factors that compelled us to write Salmon Wars.

Q: What are some of the ways that salmon farming can harm wild salmon and other wildlife?

Frantz: Open-net salmon farms are floating feedlots. Each farm generally consists of 10 to 12 cages, also called pens, made of tough plastic netting to allow the ocean currents to flow through while keeping out predators. Each cage holds up to 100,000 fish, and a site can contain a million salmon.

The excrement, excess feed, and chemical residue from a single farm can equal the waste produced by a town of 65,000 people, according to one study. But a city’s sewage is treated, while a salmon farm simply allows its waste to drift to the seabed, creating a toxic stew that can damage marine life for hundreds of yards.

That’s just not true. These farms spew parasites and pathogens that are a proven threat to wild salmon, particularly young salmon as they migrate from rivers to the ocean. One of the biggest threats is from tiny sea lice that attach to those migrating juvenile salmon. It doesn’t take many of these parasites to kill a young salmon. 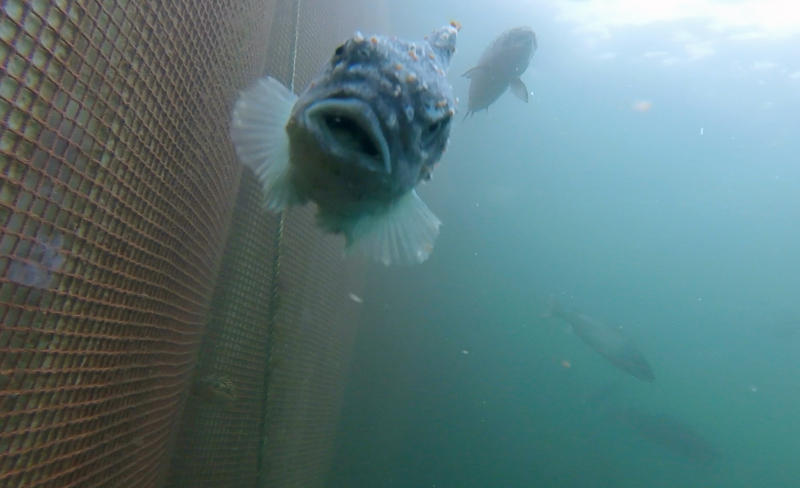 In addition to the persistent incremental environmental damage, there is a concern about the chance of a catastrophic event — such as the 2017 collapse of the Cooke Aquaculture salmon farms near Cypress Island, WA. A scathing report by the three Washington state agencies found that the company falsely blamed the collapse on a solar eclipse when it was the company’s own negligence that led to the collapse. In the days after, 250,000 farmed Atlantic salmon escaped into the Puget Sound, competing with the native Pacific salmon for food, threatening native fish with the diseases rampant in the farm environment and potentially interbreeding with the native wild salmon.

Q: Most North Americans likely don’t know that their farmed salmon could have an impact on people as far away as West Africa. Can you explain why?

Collins: Salmon are carnivores and the main ingredient in their feed is small forage fish such as sardines, anchovies, and mackerel. In the early days of aquaculture, it took as much as three pounds of wild fish to grow a pound of farmed salmon. Advances in fish meal production have improved the feed ratio but as salmon farming has grown dramatically around the world, so has demand for wild forage fish.

The impact is clearest along the 3,400-mile Atlantic coast of West Africa, where huge trawlers scoop up thousands of tons of these small fish for processing into fishmeal and fish oil to feed salmon that wind up on dinner tables in wealthier countries.

For Africans, this has been a disaster. The United Nations says half the fish stocks off West Africa are overfished and at risk of collapse. And 40 percent of these trawlers are operating illegally. Subsistence fishermen have seen catches drop sharply. Women who process and sell the fish in local markets can no longer make a living. And food insecurity is increased in one of the world’s poorest regions.

Q: Do you see similarities with the salmon farming industry and the tobacco or oil industries?

Frantz: We aren’t arguing that eating salmon is as bad for your health as smoking or as bad for the climate as fossil fuels. But there are other parallels.

In the early 1950s, tobacco industry scientists discovered links between smoking and cancer. For decades, the industry covered up its findings and waged a war to discredit independent scientists and other critics. The oil and gas industry has tried to shift the blame for the climate crises to individuals, hiding behind slick advertising and captive politicians.

Similarly, big salmon farmers disparage scientists who point out the health and environmental risks from farmed salmon and try to discredit critics. We tell the stories of several people who challenged the salmon farming giants and wound up losing their jobs or facing lawsuits.

Salmon farmers sell their product as naturally raised and sustainable. Last year, a federal judge in New York approved a settlement in which Norway’s Mowi ASA, the world’s largest salmon farmer, paid $1.3 million for deceptive advertising and agreed to stop claiming its Ducktrap brand of smoked salmon was “sustainably sourced,” “all natural,” and “from Maine.” This should be seen as a critical moment for the entire industry and for responsible consumers.

Salmon farming can be reformed if the public demands that its salmon is raised in healthier, environmentally friendly ways. The fact is that salmon farming, as it has been practiced until recently, is a freeloading business. In most countries, salmon farms use the coastline and the water with impunity, paying little to lease the sites and nothing to clean up the damage they cause. In a single-minded pursuit of profit, the multinational corporations behind salmon farming exploit public resources and ignore public health.

Q: Does salmon farming have a future and if so, what would a healthy one look like?

Collins: We think it does. There are three steps necessary to make that happen.

First, consumers need to understand the risks and rewards from eating farmed salmon. That means greater transparency from grocery stores, restaurants, and salmon farmers. Something like a QR code on salmon should disclose where and how it was raised and list the chemicals in the water and feed.

Second, individual responsibility should be translated into coordinated action. Educated consumers can team up with environmental groups, scientists, and government reformers to build a movement that demands that salmon farmers protect the environment and ensure the health of the fish they sell.

Third, governments in salmon-farming countries should stop favoring the economic interests of the industry over protection of the environment and public health.

The industry justifies itself by saying it plays an essential role in feeding the world. But there are better ways to provide the protein the world needs. One technology with the capacity to upend the status quo is recycled aquaculture systems (RAS). These facilities raise salmon on land in large tanks using filtered and recycled water. They don’t need excessive chemicals or antibiotics because the water quality is controlled. And they don’t threaten wild salmon or other marine life because the fish never touch the ocean.

One issue that even RAS plants haven’t solved is the feed. Using ground fishmeal from small fish means farmed salmon is inherently unsustainable, both in open-net pens on the ocean and giant tanks on land. New types of feed are being developed as alternatives to small fish, and governments should support these efforts, and consumers should vote with their pocketbooks by demanding the healthier, environmentally friendly salmon grown in RAS facilities.

Here’s the bottom line: Options exist to the open-net salmon farms that dominate our supply chain today. Change depends on the actions both of our governments and regulators, but just as importantly, consumers. Change will come when individual decisions are transformed into public demands, regulatory action, and a responsible salmon-farming industry.

We can choose a better way and still feed the world.