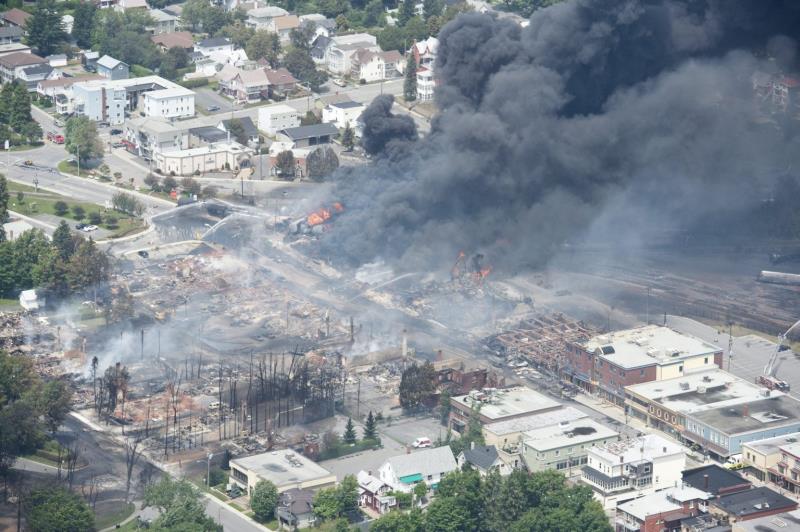 Lac-Megantic after the crude oil train derailment that killed 47. By Sierra Club.

Choking black smoke roiled the skies of the small Quebec town of Lac-Mégantic the summer of 2013 as orange flames shot from pierced oil tankers in the biggest Canadian rail disaster since 1867. An unattended 74-car freight train carting crude oil from North America’s Bakken region hurtled down a hill, derailed and exploded, killing 47 people.

Half of the town was flattened in the blast, leaving it looking like a World War II bomb site. Over a million gallons of crude gushed ablaze down streets and into the local waterways. “Disasters don’t get any bigger,” said an editor of the Vancouver Sun.

A record amount of crude oil is rolling down the tracks of America’s rail system in aging, puncture-prone cars with little regulation or safeguards. It’s only a matter of time before these moving bombs explode again, triggering a disaster in a population center or an ecologically sensitive environment, warns a troubling report from the U.S. environmental group, the Center for Biological Diversity (CBD).

The “transport of large volumes of highly volatile oil poses a significant risk to life, property and the environment … putting people, wildlife and special places at risk,” notes the report, Runaway Risks: Oil Trains and the Government’s Failure to Protect People, Wildlife and the Environment.

The Explosive Growth of Oil Trains

“These are clearly ‘bomb trains,’” attorney Jared Margolis, author of the Runaway Risks report, told WhoWhatWhy. Yet despite the recent spate of fiery derailments, “Federal regulatory agencies have allowed this dangerous increase in oil-train traffic with little to no environmental review and a complete lack of adequate response plans.”

The Department of Transportation hasn’t conducted a formal review of the potential environmental harms or risk to public safety from the drastic increase in use of oil trains to move flammable crude across the country — mostly in aging tank cars that lack vital safety features, Margolis said. And even though the DOT is phasing out the older tank cars, even newly designed and tougher tank cars are prone to puncturing.

The number of rail cars transporting oil has increased from 10,000 in 2008 to 400,000 last year. Some 25 million Americans now live within a one-mile evacuation zone in the event of an oil train derailment. Oil trains pass through 34 national wildlife refuges and within a quarter mile of critical habitats for 57 threatened or endangered species, according to the CBD report.

A network of oil train “virtual pipelines” crisscross the nation, putting at risk such heavily populated metropolitan areas as Chicago, Houston, and Albany, NY. Already, crashes in the last two years have spilled over a million gallons of oil into American waterways.

Flaming derailments have happened in Alabama (750,000 gallons), North Dakota (nearly 500,000 gallons spilled and the town of Casselton evacuated) and Lynchburg, VA, where 17 of 105 tank cars loaded with Bakken crude derailed downtown last year. One punctured car shot flames and oily black smoke into the air. Three cars crashed into the James River, releasing up to 30,000 gallons of crude.

West Virginia’s governor declared a state of emergency last year after a Fayette County derailment triggered explosions and a massive fire, setting a building ablaze and spilling crude into the Kanawha River. That disaster involved the newer, safer CPC-1232 Model tank cars supposedly less prone to rupture, as did a similar disaster in Canada’s Ontario province in February.

There were 117 crude-oil rail spills in the United States in 2013 alone — releasing an astonishing 1.15 million gallons of the poisonous, flammable stuff. That’s a near tenfold jump since 2008, and more than the entire previous four decades, according to data from the Pipeline and Hazardous Materials Safety Administration. There were significantly more spills last year (140 “unintentional releases”), according to the CBD report.

The CBD report draws a frightening picture of what could happen without more vigorous regulation: “Images of mushroom clouds described as akin to atomic bomb blasts have been all over the news, which should be a wake-up call to regulators, who have dragged their feet on new regulations for tank cars hauling explosive crude. … The next time, it could be in a more populated area, where hundreds or even thousands of people may be in harm’s way.”

Margolis, who lives in Oregon, cites an oil-rail route along the Columbia River, where an accident could seriously endanger Portland, as well as the wildlife home of several species of salmon.

Particularly worrisome are the puncture-prone DOT-111 cars used to transport the crude. The National Transportation Safety Board (NTSB) has determined that these cars will almost always breach in the event of a train accident. An NTSB official testified before Congress that the DOT-111 cars present an “unacceptable public risk.” Yet under current federal regulations, they continue to be the cars most often used to transport crude.

The Department of Transportation recently proposed new rules, but these allow continued use of the dangerous DOT-111 cars through a five-year phase-out. Meanwhile, the DOT has issued a series of “non-binding”  advisories,” urging the use of safer tanker cars and stressing the importance of safety testing. These suggestions have been uniformly ignored by the industry.

To minimize the risk of a catastrophic accident, the CBD report calls for an immediate ban on DOT-111 tank cars, and forbidding crude oil shipments to any area without a comprehensive oil spill response plan, including the training of critical response personnel.

It also recommends: 1) instituting a permit system for rail shipments of all hazardous material; 2) limiting the length of oil-train shipments to 30 cars and 4,000 total tons; 3) capping the speed below the puncture rate of cars (typically less than 20 mph) in population centers and within a quarter-mile of any waterway, national park or sensitive ecological area. (The DOT’s new regulations would allow speeds of up to 50 mph.)

Yet the same old story appears to be playing out, Margolis said. People will have to live with the risks until the government’s regulations match their stated intentions.