This story by Erica Ayisi originally appeared in Mongabay and is republished here as part of Covering Climate Now, a global journalism collaboration strengthening coverage of the climate story.

ACCRA, Ghana — White waves collide in a crash where the Volta River meets the Atlantic Ocean near Ada Foah. Warm, tropical air hovers over Ghana’s coastline — but as temperatures rise, so do sea levels, making it harder for the ocean to stay at bay.

“The sea started coming into the whole community. We were devastated,” said Akorli Simon, a former resident of Fuveme. Once a fishing village situated near the Keta Lagoon in the Gulf of Guinea, Fuveme was abandoned after the sea surged over it in 2016, washing away sediment and transforming the coast into small islands that are now home to feral pigs and a few coconut trees. Fuveme residents relocated, and Simon now lives in another town called Dzakplagbe. But Dzakplagbe is also a seaside hamlet, and he’s concerned that his new home will suffer the same fate as Fuveme.

“We are afraid that if the government doesn’t do anything, [then] the whole community will be gone — and not this community alone,” Simon said. 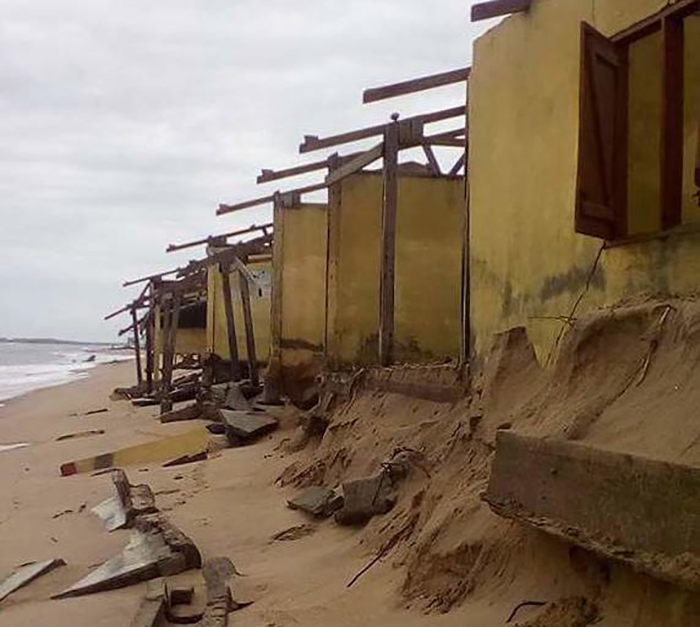 In November 2021, nearly 4,000 people in Ghana’s coastal Keta district were displaced by an early morning storm-related ocean surge, causing water to seep into homes, soaking residents’ belongings and beds as they slept. The government announced a plan to construct temporary structures for those displaced by the surge, as well as “huge financial investments” in coastal defense projects such as seawalls in the Volta, Central, Western, and Greater Accra regions to prevent damage from further sea level rise.

But some researchers say that seawalls may cause more problems than they solve and that the Ghanaian government should explore more holistic, nature-based solutions for flooding and coastal erosion.

Fallout of a Warming World

Kwasi Appeaning Addo, a professor and director of the Institute for Environment and Sanitation Studies at the University of Ghana, has been researching coastal erosion impacts for 20 years and said erosion is a “major problem.”

Research indicates the ocean claims up to 2 meters (6.56 feet) of the country’s coastline each year. Addo said that while erosion is a natural phenomenon to a certain extent, human-caused global warming is increasing it to unprecedented levels.

“Sea level rise and temperature increase are the driving forces behind what we are seeing,” Addo said. 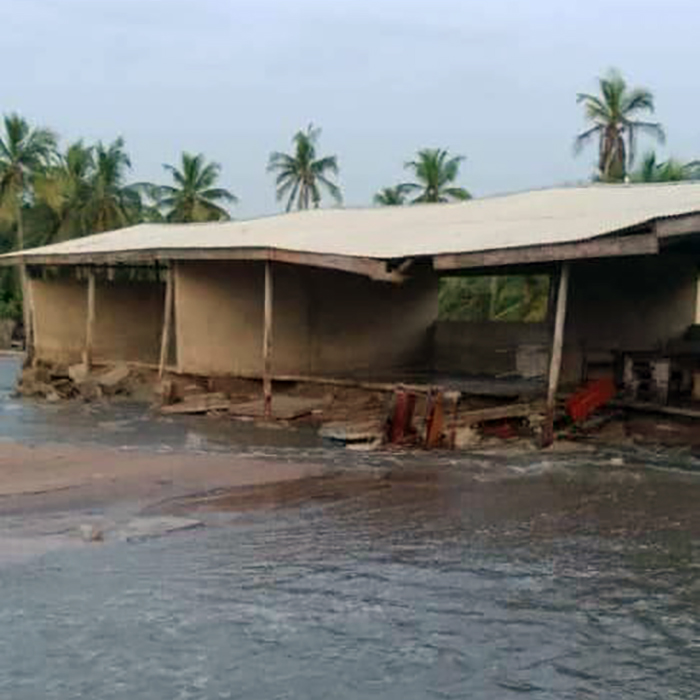 Local human activities are also contributing to erosion problems, according to Addo. Sand mining destabilizes the shoreline and further endangers communities to more erosion, he warned. He said residents illegally mine sand “under the cover of darkness,” which they sell to real estate developers or use to build dikes around their properties to protect their homes.

Addo said that the construction of the Akosombo Dam on the Volta River in 1961 reduced the volume of sediment that once helped replace coastal land lost to erosion.

The Volta River estuary is known for its pristine blue water, beaches, and scenic views, which attract visitors from near and far to its seaside communities.

Tourism is the reason why Gladys Amele De-Tada built Fadzi’s Haven, a small resort tucked away in the village of Havui. To get to Fadzi’s Haven from Ada, visitors take small boats that wind along the Volta River and through mangrove forests.

“It’s always been my dream to have a place where I could welcome people and receive them and feed them delicious meals,” De-Tada said. “They kind of feel refreshed.” 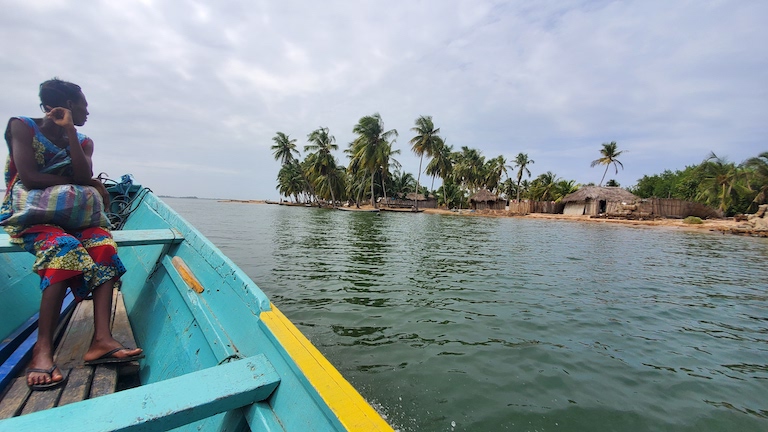 But Havui, like other coastal communities in Ghana, is also threatened by erosion from sea level rise. De-Tada worries her village and business will be the next Fumeve.

“I could wake up one day and I’m in water. The sea is unpredictable,” De-Tada said.

The village of Salakope-Amutsinu lies about 9 kilometers (5.5 miles) outside of Ada in the Ketu South municipality. Sylvester Kumawu, the assembly member for Salakope-Amutsinu, said residents in this community are victims from a string of 2021 storm surges that resulted in erosion and homelessness.

“They are seeking refuge in churches and schools, and others are sleeping by the roadside,” Kumawu said. 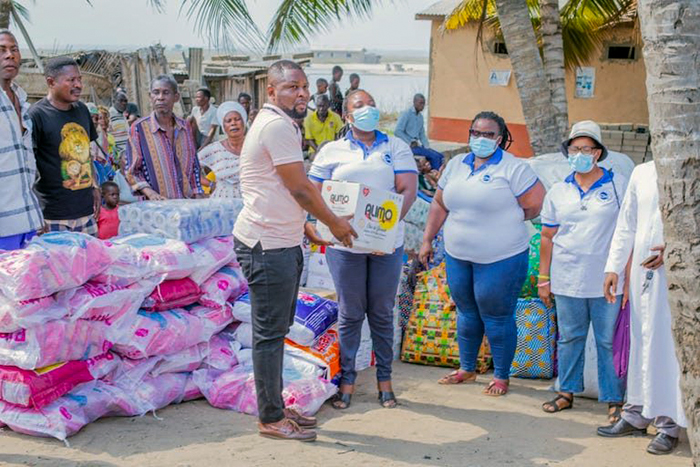 Donations being disbursed to the victims of coastal erosion. Photo credit: Courtesy of Sylvester Kumawu

Many residents of Ghana’s coastal communities rely on fishing and farming for their livelihoods. Representatives of civil advocacy organizations say that, without income, those displaced may not be able to access even basic necessities.

Dzifa Gomashie, Member of Parliament for the Ketu South Municipality, said the recent storm surge destroyed 40 houses and affected more than 1,000 of her constituents.

“The minister is on record to have said we would see the continuation of the building of the Sea Defense Wall in June. We are still waiting,” Gomashie said.

After the most recent storms and flooding, the Ministry of Housing and Works said in a statement that it is “currently actively working with the Ministry of Finance to raise the needed funding for the implementation of the second phase.”

According to Reuters, Ghana’s parliament approved the 2022 budget late November. However, despite approval occurring after destructive flooding events, the 2022 Budget Statement and Economic Policy did not include support for victims of sea level rise or a specific plan to mitigate coastal erosion. 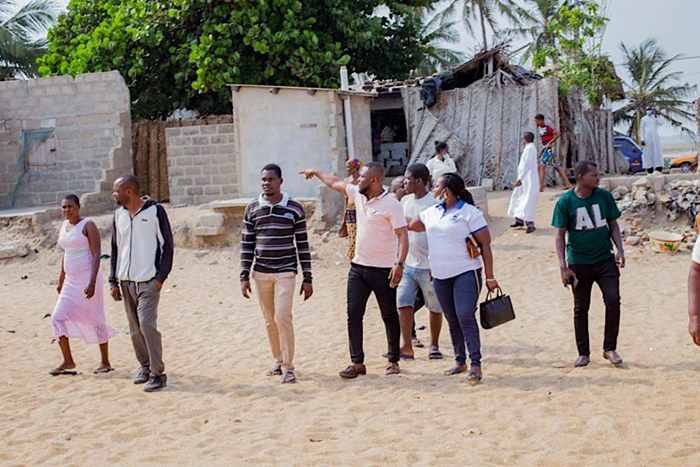 A subsequent public outcry resulted in “modifications” to the 2022 budget by the Ministry of Finance to include an allocation of GHC10 million (around $1.6 million) to expand feasibility and engineering research to “consider a more comprehensive solution to protect Ghana’s 540 km (335.5 miles) of coastline.”

Gomashie, along with her caucus, voted against the bill. She said she is disappointed with the modification.

“My shock was to hear the minister say he was committing some resources for the feasibility study but not to continue with the phase two Defense Project,” she said.

Are Seawalls the Solution?

Some 340 million people worldwide will be affected by rising sea levels by the middle of the century, according to research published in 2019 in Nature Communications. Seawall construction is one of Ghana’s main methods of combating coastal erosion.

The use of seawalls began more than 150 years ago when coastal communities used local stones and rocks to construct barriers. The construction of concrete seawalls began in the early 20th century.

In 2019, the Ministry of Works in Housing announced its “Coastal Management Plan,” which aims to construct seawalls to protect vulnerable locations along the Ghanaian coast. The most recent project concerns the construction of a seawall in the Ningo Prampam district. According to Ghanaian news outlet JoyNews, the wall was due to be completed by December 2021, but construction was halted due to insufficient funds. 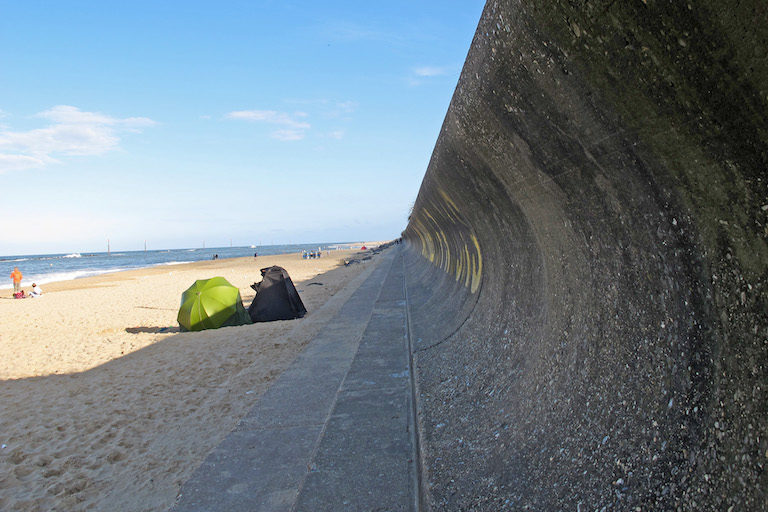 The government did not respond to questions about the total amount it has spent on seawall construction in recent years, but Construction Review suggests the figure is at least $69 million since 2019. The Keta Sea Defense Project, which began in 2010, has reportedly cost around $90 million.

According to Addo, while seawalls do provide “some level of protection” for Ghana’s coastline, construction is often done without proper management planning and without enough research to fully understand the situation and provide effective results.

“Putting in the sea defense [walls] in itself is not the solution,” Addo said. “There’s so many things we need to understand, and it is this understanding to help us to come out with a science-based solution. Otherwise, the solution becomes ad hoc.”

Addo is not alone in his skepticism. Research suggests that “hard structures” like concrete seawalls may not be completely effective in stemming erosion of West Africa’s coastline — and may even cause environmental problems. Seawalls block access to beaches and mudflats, areas that are important for many coastal animals and plants. Because of this, studies have found that seawalls tend to reduce biodiversity.

Addo said seawalls may even contribute to an increase in erosion in other areas by changing the character of the shoreline, essentially shifting the problem instead of solving it.

“An area that may be eroding at a mild stage will begin to experience extreme erosion because now the dynamics [have] changed,” Addo said. 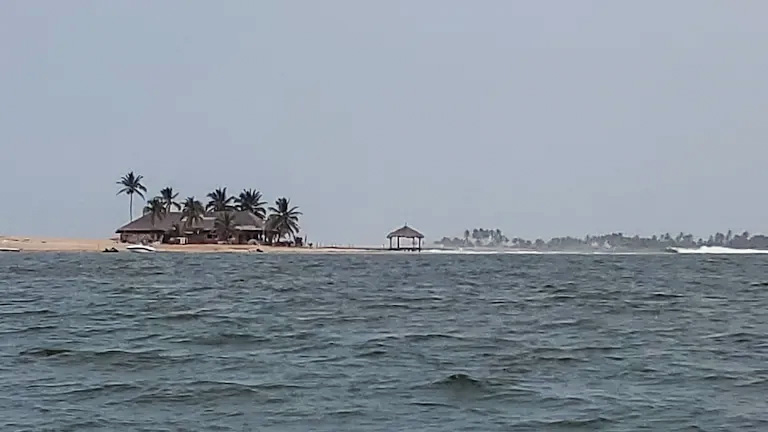 According to research published in 2021 in Global Environmental Change, a sole focus on constructing seawalls distracts from other potential coastal erosion solutions.

Addo favors a holistic approach based in science that can help defray seawall construction costs while allowing nature to take its course. He suggested a “hybrid approach” that may include relocation of residents in the most vulnerable communities together with ecosystem restoration. But he cautioned that more research is needed to make sure this is done correctly.

Preserving coastal vegetation, such as mangroves, is considered one of the best ways to combat flooding and storm surges. In addition, mangroves also provide an important habitat for fish stocks, particularly for young fish, that play an important part in Ghana’s coastal economy. But many of the country’s mangroves have been cut down for firewood; researchers said such “overexploitation” has diminished the strength of the country’s coastline. 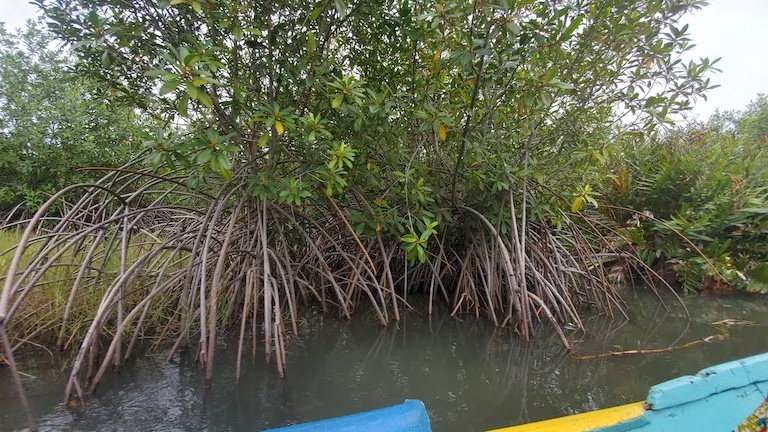 Addo said reestablishing coconut and mangrove trees in areas that have been cleared may help reduce flooding events.

Addo’s solution does not provide an immediate fix for Ghanaians currently experiencing homelessness due to recent flooding events. While Kumawu advocates for “a sea defense wall, and that is not negotiable,” on behalf of his coastal community, he said that what they need now are tents, mattresses, blankets, and food to survive.

But Addo said that if nothing is done about rising temperatures and carbon dioxide emission rates, the challenges Ghana is currently experiencing will likely become lasting ones that stand to affect generations to come.

“Life is precious. We can’t wait until we lose people,” Addo said. “We can rebuild infrastructure. We cannot rebuild a human being.”

This story was produced with support from the Pulitzer Center.