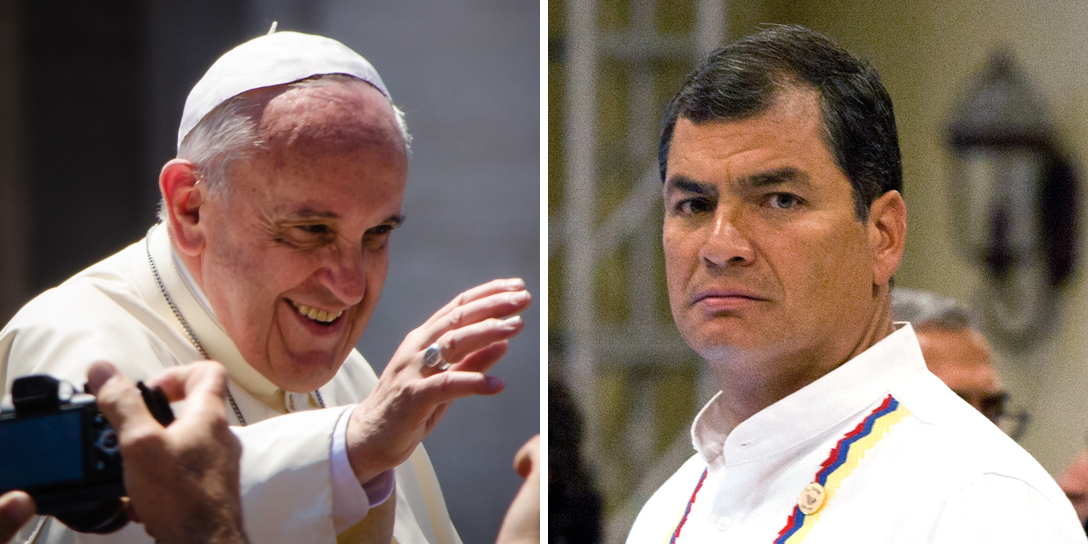 Why is Pope Friends with This Man?

This week, as interest in his bold initiatives continued to grow, Pope Francis met with mayors from around the world energized by his bold new encyclical on the environment. Among leaders who have associated themselves closely with the Pope and his project, few are as passionately outspoken as Rafael Correa, the president of Ecuador.

During a recent three-day Papal visit to Ecuador, Correa took every opportunity to tout his “Leftist” government’s commitment to environmental sustainability and justice for the poor–all in accord with the encyclical.  And the Pope lent credence to Correa’s influence as well.

Yet this embrace should raise eyebrows. Because Correa is absorbed in a fierce and dirty battle with environmental activists in his own country that calls the entire notion into question.

Also in question is why this seemingly idealistic and well-informed Pope does not seem to notice the contradiction.

The Darker Side to Correa

In Laudato Si (Praise Be To You), the Pope’s second encyclical, he calls for revolutionary action to protect “Sister Earth”, and comes down very hard on the fossil fuels industry. Apart from unequivocally calling for an end to the use of fossil energy, Laudato Si confronts corporate power and its dominance over the public sphere.

The Pope also warns against corporate control of technologies and against blind faith in technological fixes for today’s problems. He even devotes an entire chapter of the encyclical to the promises and threats of new technologies.

Yet while Correa was able to share in the popular Pope’s glow, there’s a darker side to Correa–his courting and embrace of large mining corporations;  his betrayal of the indigenous peoples of Yasuni National Park by allowing oil drilling there;  his preventing observers from entering the park to see what’s really going on; the discrediting of his critics by underhanded means; and his policies’ impact on two anti-mining activists. One of those, Jose Tendetza, who was organizing protests against a Chinese-backed mining project was murdered last December (The crime remains unsolved.) The other, Javier Ramírez, who opposed strip mining in Ecuador’s Intag valley, was jailed for 10 months for “sabotage and terrorism”, charges which supporters claim were manufactured.

But, back to appearances: The Ecuadorean government maintains that the mining corporations invited to Ecuador, which include China’s Ecuacorrientes and Chile’s CODELCO, practice “responsible mining.”  However, Acción Ecológica, a local environmental NGO, argues that large-scale mining can never be sustainable, and that “responsible mining” exists only in the industry’s own public relations literature.

Correa, for his part, has hit back in his “sabatinas”, or weekly televised addresses, calling opponents of his mining policy “infantile environmentalists.”

This virtual war between Correa and environmentalists raises an inevitable question: how can this pope reconcile that and his friendship with the president?

We do not know about the private communications between the two, but we do know that the friendship and camaraderie between them goes back at least to last April, when Correa attended a Vatican symposium on ecology and justice. The high-profile event was attended by civil society leaders, as well as by a roster of international VIP’s that included United Nations Secretary General Ban Ki Moon and celebrity economist Jeffrey Sachs.

Correa and his Alianza PAIS party have been proclaiming that Laudato Si bears the Ecuadorian president’s imprint.

“Francis has been imbued with the revolutionary proposal of Ecuador, which is living through not only an economic miracle but an ecological one”, boasted Correa after the document’s publication.

Ecuador’s is “the first constitution in the history of humanity to grant rights to nature,” Correa asserted in a speech welcoming the pontiff on his arrival at Quito airport. “20 percent of our territory is protected in 44 reserves and natural parks.”

He also declared himself a friend of indigenous peoples: “We have 14 indigenous nationalities with their corresponding ancestral tongues, including two uncontacted tribes, who have preferred voluntary isolation in the heart of the virgin jungle. Our constitution defines Ecuador as a unitarian, but plurinational and multicultural state.”

While the world’s media has largely broadcast these kinds of lofty pronouncements, a very different story exists on the ground. It concerns Correa’s  authorization of oil drilling in the heart of  the uncontacted peoples’ territory.

In the country’s east, in the Ecuadorian Amazon jungle, bordering with Peru, is the biodiverse Yasuni National Park—one of the world’s great natural wonders according to UNESCO. It is also the home of the uncontacted Tagaeri and Taromenane indigenous peoples, whose right to remain uncontacted is ratified in Ecuador’s constitution.

Under the Yasuni lie the ITT geological formations, which hold about 20 percent of the country’s proven oil reserves. Civil society activists came up with an unprecedented win-win proposal to protect the rainforest. Known as the Yasuni ITT Initiative, this plan would have left the ITT oil unexploited and, in exchange, Ecuador’s government would have received a compensation from the international community.

Correa embraced the Initiative and made it into official government policy. But it failed, as the fundraising fared miserably. In 2013 the president pulled out of the deal and authorized the oil drilling to start.

But enviro activists refused to forsake the Yasuni and its indigenous peoples and continued their campaign, blaming Correa for the failure. Groups like Acción Ecológica and Yasunidos claim he neglected his fundraising duties, delegating them to unqualified political hacks–while he secretly courted oil companies.

Correa assured that the drilling would be done according to the very highest environmental standards. But a collective of Italian geographers called Geoyasuni produced satellite imagery that showed that the construction of these new rigs was a total environmental disaster, in blatant violation of the operation’s environmental impact statement.

Activists have not been permitted to enter the area in order to verify Geoyasuni’s claims. Last December, a delegation of Germany’s Bundestag that wanted to take a look at the construction had their visas cancelled by Ecuador at the last minute.

So Much for “Citizens’ Democracy”

So, what ever happened to the Correa administration’s talk about sustainability and citizen participation, the so-called Citizens’ Revolution?

“The state apparatus does not allow citizens to exercise their rights under the constitution,” environmental and human rights attorney Pablo Piedra told WhoWhatWhy.

“Our constitution is ahead of its time. But its citizen rights have not become a concrete reality,” said Piedra. “The functions of the state, including the judiciary, lack independence.”

The attorney, who has been trying to get access to the Yasuni oil operations, explained that those who question the ‘extractivist’ economic model of Ecuador’s government are discredited and persecuted. “The government does everything in its power to destroy your public image.”

Piedra has experienced this first hand. He is the target of a government media campaign that labels him a “liar”. Piedra spoke to the Ecuavisa television channel demanding  to see–with his own eyes–whether  there is indeed a ball park-sized gash in the jungle, as the Geoyasuni images show. Piedra was clear that he was making no accusations and that he could be wrong.

But, according to Piedra, SECOM, the government’s communications ministry, edited and manipulated the video to make it seem like he was categorically accusing the government of lying about the road. The government then used the modified footage to make a liar of him.

Piedra is now suing the government, seeking a retraction. In light of all this, do Correa’s policies fall in line with the pope’s encyclical, as the president claims? Not at all, says Piedra, referring to paragraphs 36 and 37 of the document. In paragraph 36 the pope seems to be calling out leaders like Correa: “Caring for ecosystems demands far-sightedness, since no one looking for quick and easy profit is truly interested in their preservation.”

And paragraph 37 is applicable to Yasuni: “Certain places need greater protection because of their immense importance for the global ecosystem, or because they represent important water reserves and thus safeguard other forms of life.”

Has the Chevron Lawsuit Become a Political Football?

As a last line of defense, Correa’s supporters are quick to point to the president’s support for a landmark lawsuit of Ecuadorian communities against Chevron for environmental damages caused by its Texaco subsidiary. The plaintiffs won in an Ecuadorian court an unprecedented $19 billion settlement, which Chevron is appealing all the way.

But Acción Ecológica, which has supported the lawsuit all along, claims that Correa’s support is just “greenwashing,” a face-saving gesture to make up for the Yasuni Initiative failure.

“Correa’s involvement has in reality caused problems for the cause against Chevron”, said Piedra. Because of its poor environmental record, “This government is actually providing arguments to Chevron, which is seeking to cast doubt on Ecuador’s system of justice.”

Piedra explains that contrary to what president Correa claims, the campaigners do not want the drilling for oil to simply stop. “What we want is standards and control in existing oil operations, and we want them to stay away from the Yasuni”.

Meanwhile Pope Francis has yet to say anything critical about Correa’s environmental failures and his aggressive stance toward activists. Judging by his public statements, it is not his style to call out people by name. Is he intentionally steering clear of particular controversies? And if so, is he hoping for presidents and other world leaders to ‘get his message’ without him having to admonish them one by one?

More specifically, is Pope Francis really going along with Correa? Or did he scold him in private so as not to embarrass him publicly? We do not know. What they spoke of in those meetings remains private.