Oregon Is Turning Sewage Into an Endless Supply of Green Energy

This story, by Britany Robinson, is being posted with the kind permission of the original publisher, Reasons to Be Cheerful.

In the summer of 2020, as wildfires burned across more than a million acres in Oregon, workers at Clackamas County’s water treatment facility started calling each other. From their homes, they could see that the towers of flames were closing in on the wastewater treatment plant. Power was failing all over the state. If the facility lost power, it could flood the Willamette River with untreated waste, causing untold environmental damage.

In the end, the facility remained powered up and the Willamette was spared. But with wildfires and extreme weather increasingly common, the incident underscored how generating and storing renewable power on-site could build resiliency into the system. 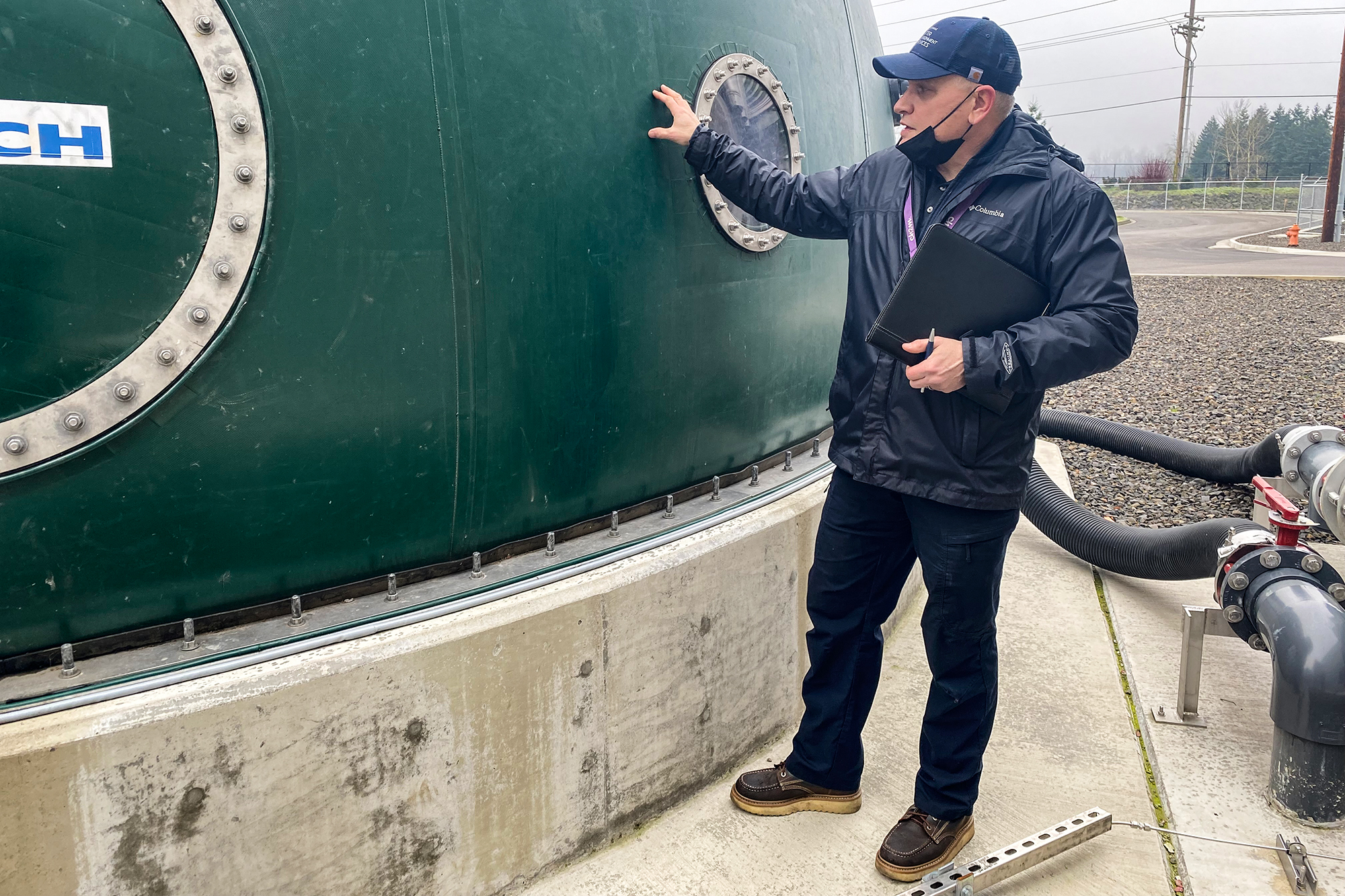 Grey Eyerly with the tank that safely stores a fluctuating level of methane gas. Photo credit: Britany Robinson / Reasons to be Cheerful

“It’s extremely energy-consumptive to treat wastewater,” says Dave Moldal, program manager at Energy Trust of Oregon. As the region grows in population, the more energy the wastewater plant requires. But what if increasing volumes of wastewater could provide the treatment plant with more energy rather than consume it? That’s exactly what’s been happening at Clackamas County’s Tri-City Water Resource Recovery Facility for the past seven months.

Since August 2021, the plant has been pumping out renewable power produced from methane, a natural byproduct of human waste decomposing in an oxygen-free environment. Now, this loop of green energy represents a powerful example of how waste can become something we benefit from rather than expend resources disposing of. By turning human waste into power, wastewater treatment facilities have the potential to become energy generators instead of consumers while creating clean water that’s returned to the local ecosystem.

When wastewater arrives at Clackamas Water Environment Services’ treatment plant, it contains pretty much what you’d expect — human waste, paper, food, soap, and sand — plus a random assortment of items that people accidentally flush or drop into drains, like a miniature stormtrooper helmet, a Pee-Wee Herman doll, and a rubber elephant, all of which are proudly on display at the facility.

But the individuals who work here don’t consider this to be a mere waste treatment facility. Instead, they see it as a place where clean water and fertilizer for nonfood crops is produced. And now, they’ve added a third item to the list of beneficial resources they churn out: green energy. 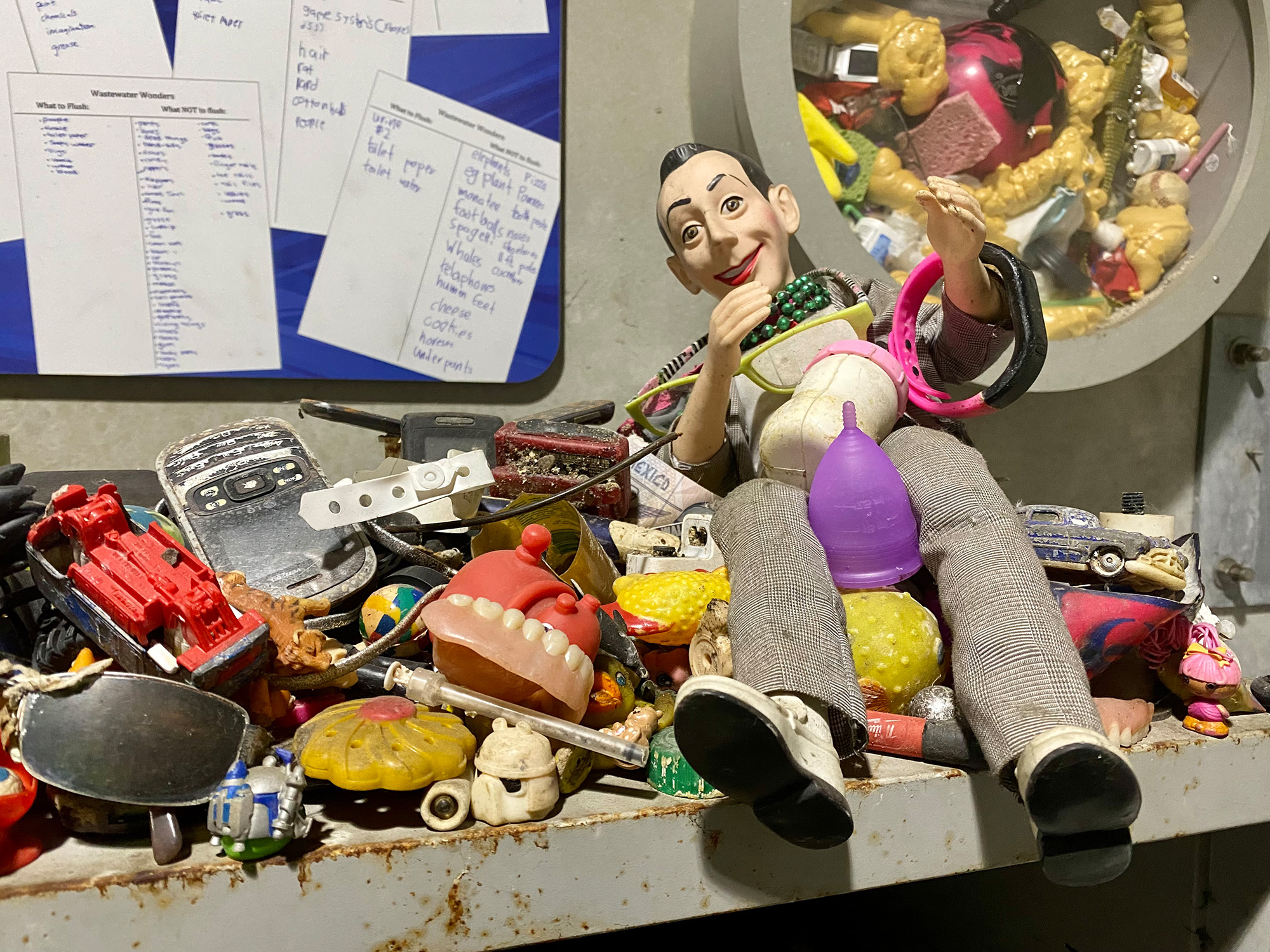 Trash pulled from the facility’s waste flow are among the few things that can’t be turned into something useful. Photo credit: Britany Robinson / Reasons to be Cheerful

When wastewater arrives, it first must be pumped into the facility. Five motors, each running 100 to 200 horsepower, are needed to lift the flow up into the machinery that will treat it. “That’s a huge energy consumer right there,” explains operations supervisor Darren Eki.

Once the water is pumped up, screens are used to pull out the biggest solids, like paper and rags. “It can cause clogs and damage — all kinds of bad stuff,” says operations manager Greg Eyerly. “They clog our pumps and cost millions of dollars a year for municipalities. So, all of that goes to landfills. This is essentially the only waste product we have.”

Grit is removed next, which includes asphalt, limestone, and concrete, as well as eggshells, coffee grounds, seeds, bone fragments, and other organic food waste particles.

Up until this point, the water has been moving pretty fast as junk and grit are filtered out. Now, it slows through open-air channels where the remaining solids settle to the bottom. About 40 percent of waste is filtered here in this natural process. 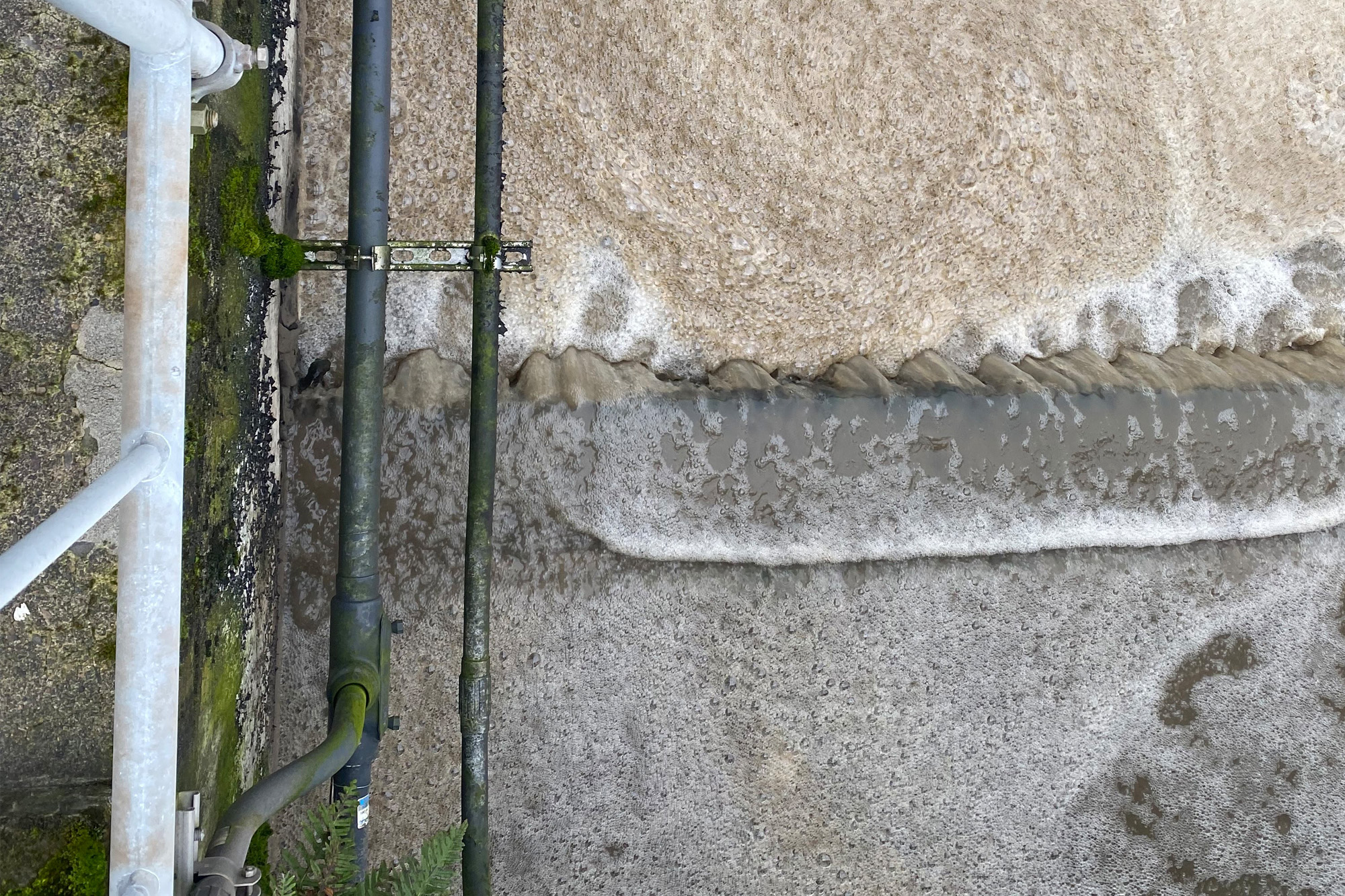 Then it’s bacteria’s turn to do the work. In the human stomach, microbes help to break down food. Water treatment plants like Clackamas County’s employ a similar process. It takes a long time to grow the right kind of microbes, though, so if a treatment facility is starting from scratch, they might borrow some bacteria from another plant to kickstart their own, not unlike a friend might lend you their sourdough starter.

Once those microbes are working, it’s called activated sludge, and it’s a key player in cleaning water. “We’re replicating what happens in nature, but we’re doing it in a matter of hours rather than days or weeks,” says Eyerly.

“This biological treatment, nobody had that before 1972,” explains capital program manager Lynne Chicoine. That’s when the Clean Water Act was passed, forcing wastewater treatment facilities to do a better job at cleaning the water they released into nearby rivers. The federal government funded retrofits at many of those facilities around 50 years ago, including this one. “And now a lot of them need to be expanded or upgraded,” says Chicoine. That need for expansion is part of what prompted the plant’s latest upgrades. 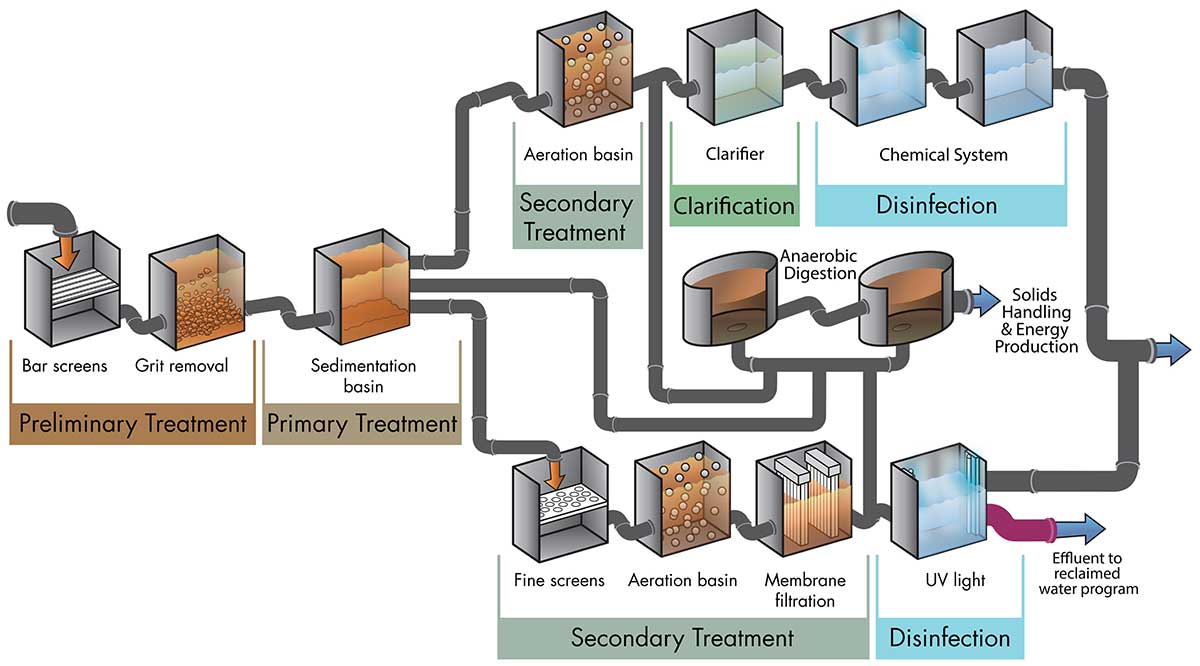 While clean water goes in one direction to disinfection and, ultimately, the river, the remaining biomass goes in another to one of three anaerobic digesters, the newest of which is a 1.3 million-gallon tank that operates like a hulking metal stomach. Inside, naturally occurring microorganisms further break down organic matter in an oxygen-free environment that allows for the concentrated production of methane. The methane rises to the top of the digester and is transferred to a new 600 kW lean-burn co-generation engine, which converts it into heat and electricity. The co-generation engine creates heat for five of the buildings on site and an estimated 4,324 megawatts of electricity, providing about half of the facility’s energy usage.