Oil Development Is Changing the Rules of the Game for Wildlife

Major ecological changes are afoot in western Canada’s boreal forests, and they have scientists concerned. The most glaring problem is a steep decline in boreal woodland caribou (​Rangifer tarandus caribou), listed as threatened under Canada’s Species at Risk Act.

“There are populations in Alberta that probably don’t have a couple years to live,” says wildlife ecologist Jason Fisher of the University of Victoria. “It’s bad. This is really something we have to address immediately.”

Some scientists and government officials have blamed wolves for caribou losses. And desperate times have led to desperate measures to protect the endangered ungulates, including culling wolves. But research published in 2020 showed that landscape changes like oil development and logging are ultimately responsible for caribou declines. Clearings in the forest, the researchers found, function like predator highways and aid the wolves in their hunting.

Now a new study in the journal Science of the Total Environment shows that development from the oil industry in Alberta is causing more than just a change in wolf-caribou relations. The research analyzed three years of camera trap data that also included other forest mammals, like white-tailed deer, moose, black bears, coyotes, lynxes, and fishers.

Yes, the forests still hold a lot of wildlife, the study found. But not necessarily in a good way.

“What this paper showed is that these features are bringing animals together,” says Fisher, a study co-author, who also leads the mammal component of the Oil Sands Monitoring Program, which tracks the environmental impact of extraction in Alberta.

“The industrial footprint changes the rules of the eternal game of hide-and-seek between predators and prey,” he adds.

Scientists are realizing this can have far-reaching effects across the ecosystem.

Alberta, Canada, sits above one of the largest hydrocarbon deposits in the world. But it’s also “unconventional” crude known as oil or tar sands, which are much harder to get out of the ground than conventional oil that’s in liquid form between rock formations.

The fossil fuel industry extracts deposits closest to the surface by razing the boreal forest and digging massive open-pit mines. Much has been written about the great harms that process causes to the environment and human health.

But from a production standpoint, open-pit mines extract less oil than in situ development, in which wells are dug in the ground and the viscous bitumen pumped out (often after heating or adding other fluids).

That process doesn’t create the same decimated landscape as mines — or the arresting images that have garnered the world’s attention. 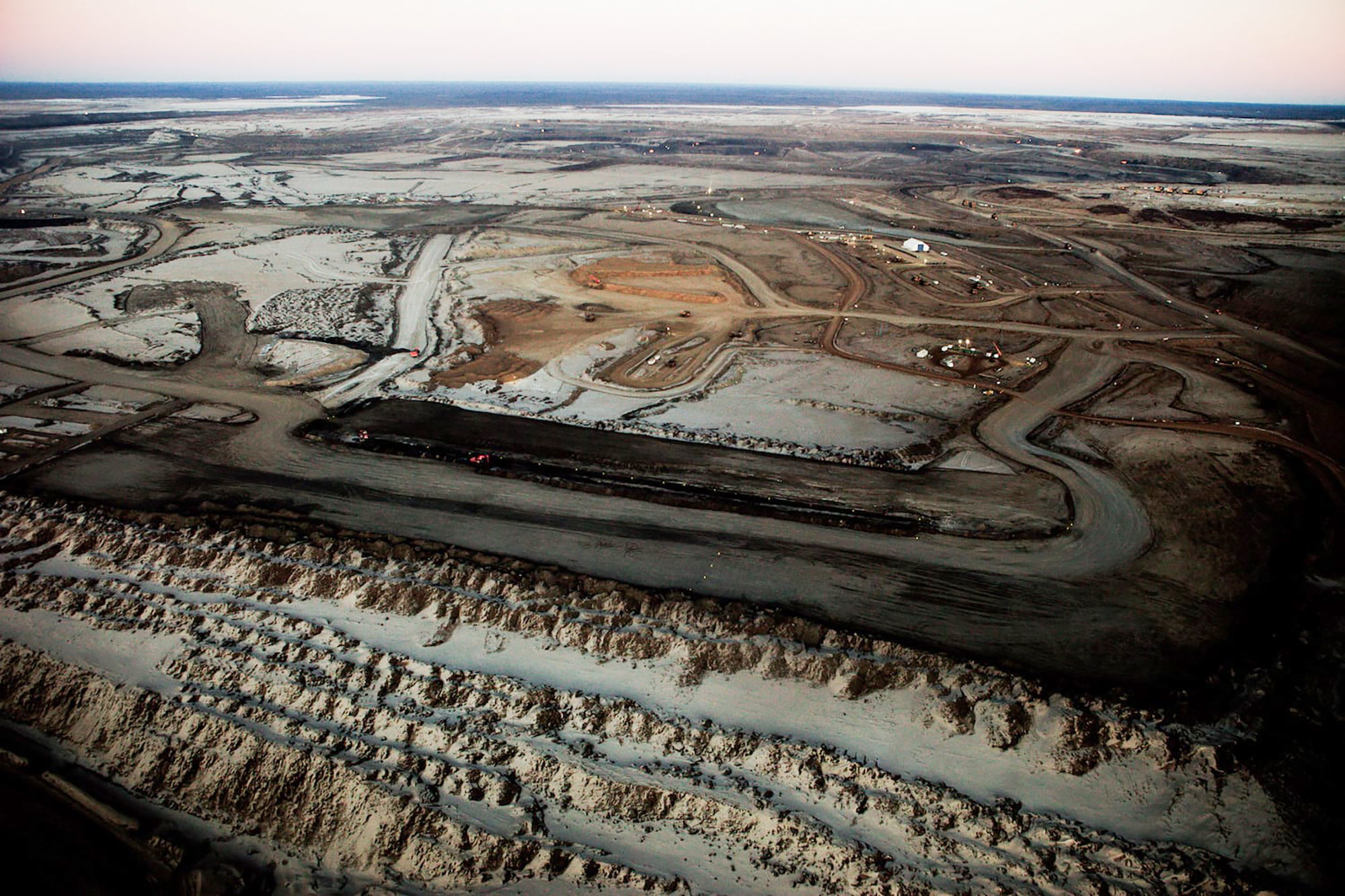 First it requires cutting straight routes through the forest to run seismic machines that use ground-penetrating sonar to look for oil deposits. If producers find an area or “play” they think they want to develop, they use another type of seismic machine that requires felling more trees.

These swathes are narrower, but are cut in a hashtag-like pattern, known as 3D seismic lines.

That maps out where in the play to start drilling exploratory wells, which then requires clearing larger patches of ground completely. If a suitable area is found, a wellhead is constructed.

“Once you have enough of those well sites in the landscape, you have to connect them up with pipelines,” says Fisher. “Then you need roads to service the pipelines, and all the pipelines go to a compressor station that gathers it all up and then sends it on down the line.”

All that development leaves industrial footprints of different shapes and sizes stamped across the boreal forest.

“Our job [as landscape ecologists] is to understand how that’s affecting what’s left, because the amount of forest removed is actually only about 10 percent of that land base,” he explains. “You might think that’s ‘intact’ — but it’s not, because in landscape ecology, shape matters.”

What happens when a forest is heavily fragmented? In the boreal, researchers found that larger mammals — especially predators — react more strongly to the disturbed areas when lots of deer and moose show up, which they usually do, because they’re attracted to the vegetation that grows after the trees are cut.

Moose and deer come for this new buffet, which attracts more wolves and bolsters their populations. The lines cleared through the forest also make it much easier to move around and hunt.

Along the way, caribou become an unintended target.

Oil development in the boreal also enables coyotes, who thrive in human-disturbed landscape, to expand their ranges. And coyotes, the researchers found, were more likely to use roads when moose were around. That closer proximity allows for more coyote predation on moose — especially moose calves. And roads enable coyotes to run faster and hunt moose more effectively. 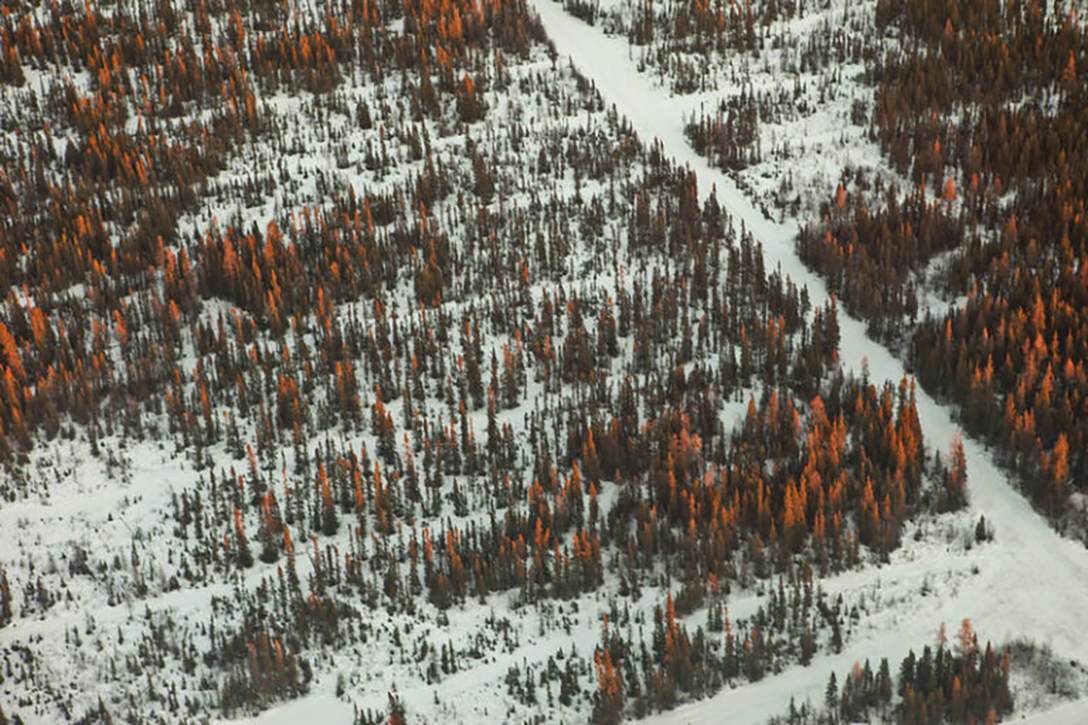 Another recent study found that rare and elusive wolverines could suffer as more coyotes expand into boreal forests, competing for similar resources.

As for the region’s biggest predators, bears often avoid the clearings from 3D seismic lines, but the study in Science of the Total Environment found they’re more attracted to those areas (or minimally less repulsed) when moose are present. Bears may even play an unseen rate in moose declines. Moose populations in Canada are “all over the map,” says Fisher, and are dropping in some areas, including neighboring British Columbia.

Bears will prey on young caribou, too. They don’t seem to gravitate toward oil and gas development like wolves, but they also don’t always avoid those areas either, says Fisher.

“They just sort of seem to go where they want, when they want,” he says. “If we drive wolves down, my worry is that things like coyotes will take their place, but maybe also bears.”

Then there are the smaller furbearers like lynxes, red fox and fishers. The picture there is less clear. Overall things aren’t great for those populations. “They’re tanking fast, but we’re not really sure why yet,” he says.

Climate has a hand in amplifying some of these changes.

Warming temperatures are increasing insect infestations from mountain pine beetles and spruce budworm, which have killed large swathes of forest. Once that happens, any rules in place to ensure more responsible logging are out the window.

“If mountain pine beetles have killed it, [loggers can] take the wood,” says Fisher. “And so you end up with these big moonscapes, which probably has something to do with moose declines.”

Warming temperatures also means less severe winters with reduced snowpacks — and that has also opened the door for white-tailed deer to move into the boreal. The changes in vegetation from logging and gas development have lured them north in such great numbers that they’re now the most abundant ungulates in boreal.

And as we already know, that drives wolf numbers up, and woodland caribou down.

“This interplay between climate change and landscape change is almost like a perfect storm of problems that have beset the boreal forest,” Fisher says. “We’re only on the tip of the iceberg now — we’ve only really started looking at this in earnest over the last couple of years and realizing, ‘Oh my God, we’ve got a real brewing storm on our hands.’ ”

So what’s to be done?

The most time-sensitive problem is the decline of caribou, but killing wolves likely won’t provide a long-term solution. Fewer wolves may boost the number of coyotes, who also prey on young caribou.

Invasive white-tailed deer could also increase in numbers at a greater rate if wolf populations fall.

Another problem is that land is still being cleared at a rate that’s detrimental to caribou.

“We can do a better job at landscape protection,” says Fisher.

Not to mention restoration. All companies are required to do reclamation, but that’s often a far cry from real restoration. Reclamation focuses on making a brown area look green, usually by planting something quick-growing like grasses.

Some companies have gone beyond Canada’s federal mandates and replanted native shrubs and trees. But a lot more of that is needed, says Fisher. And it will be a long time before the newly planted vegetation grows up. 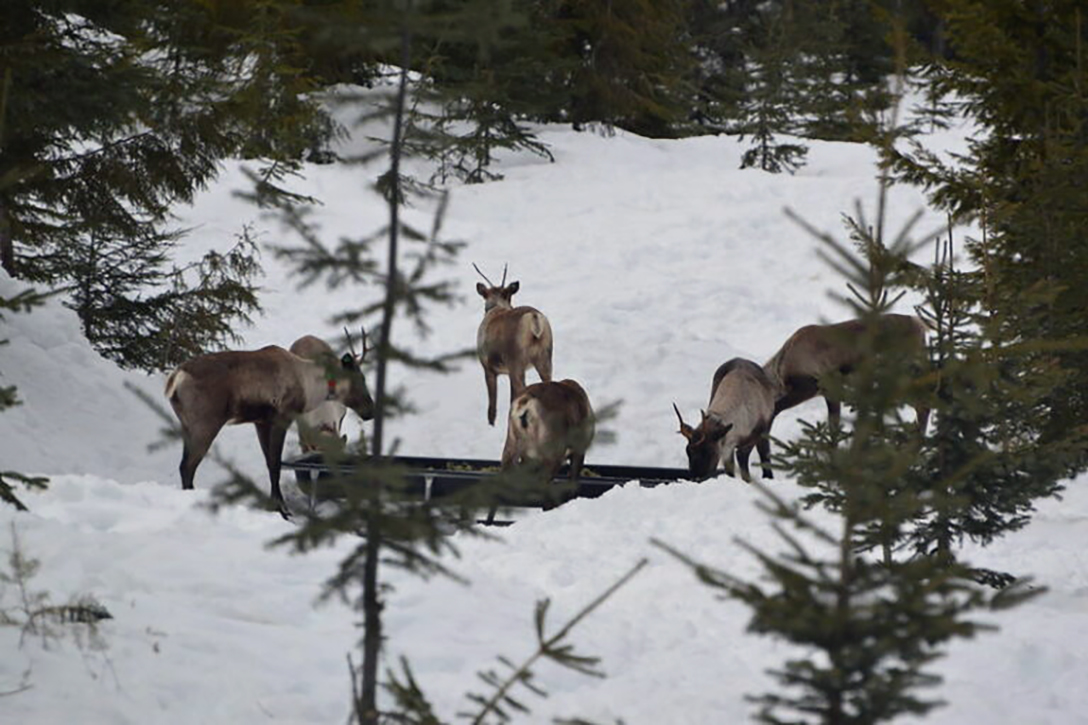 “By managing animal movements that regulate predator–prey encounters, risk to endangered species can be reduced without the disruptive trophic effects caused by intensive carnivore removals,” the researchers found.

Protecting caribou when they’re young also helps. In British Columbia the Saulteau and West Moberly First Nations have had success with a program that pens and protects pregnant woodland caribou and the calves until they’re a few months old.

“I think the evidence is really clear that using multiple strategies is far better than just throwing all your eggs into the wolf-kill basket,” says Fisher. “And we can’t do that either because people see that as lifting the weight of responsibility from oil companies and putting it on wolves as a scapegoat, and that’s just not sustainable societally.​​”

There’s still a lot that needs to be done to understand the changes that are happening, he says. But the world should take note.

As Fisher and conservation biologist A. Cole Burton warned in a 2018 study, “The Canadian oil sands provide an early warning: as oil and gas extraction continues to drive national and global economies, the biodiversity effects we observed are a precursor of the potential future of landscape change in unconventional petroleum regions around the globe.”