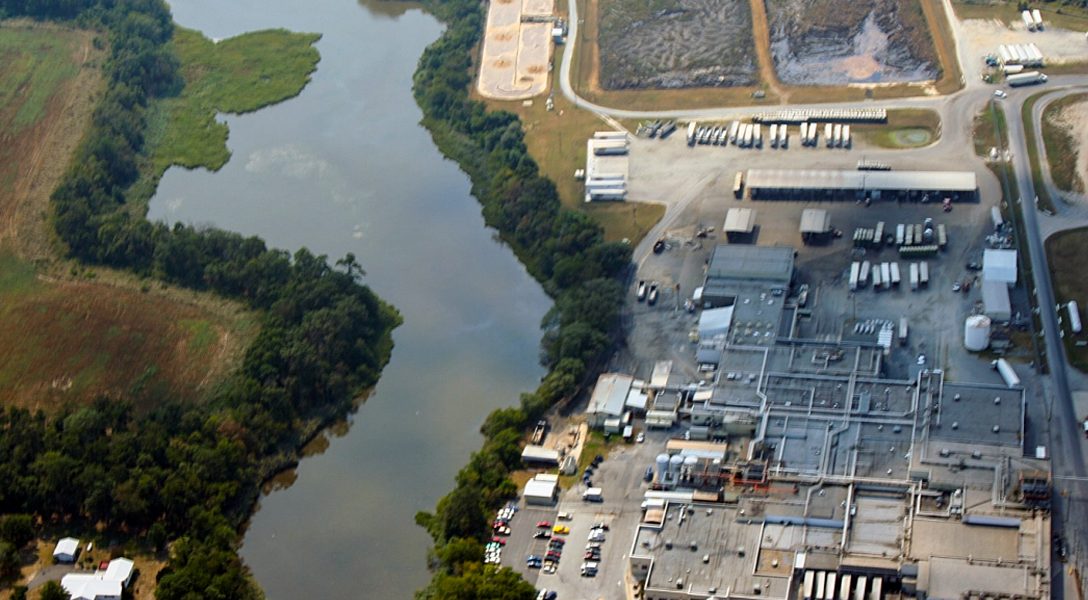 No Sh-t: Grassroots Activists Take on Big Ag — And Win

For years communities trying to fight pollution from factory farms kept running into a legal roadblock. Until recently, the courts ruled that these farms were exempt from environmental regulations because their animal waste could be returned to the ground as fertilizer. No longer.

Due to recent judicial and regulatory rulings, manure not properly managed will now be treated as solid waste. The pollution it causes will be covered under the Resource Conservation and Recovery Act (RCRA) and owners will be responsible for cleaning it up to protect public health.

These rulings could give leverage to grassroots citizens’ groups around the nation fighting contamination from factory farms.

It was the discovery of toxic waste dumps scattered throughout the nation that led to the passage of the RCRA in the 1970s. Yet until very recently, no citizen suit brought against a concentrated animal feeding operation (CAFO) under the RCRA has been successful anywhere in the country.

But rulings in contamination cases in Millsboro, Delaware, and Yakima Valley, Washington, may signal a major public policy shift — a shift that could alter the balance of power between factory farms and the grassroots citizens’ groups fighting the massive wastes they generate.

When Mountaire Farms got its permit to open a chicken processing plant in Millsboro, Delaware, in 2000, many residents considered their new corporate neighbor a big plus for the community. They welcomed a firm that would bring more jobs to the area as well as strengthen the tax base. But over time, the good feelings between the company and its adjacent communities evaporated.

Seventeen years later, Millsboro residents organized to block a third processing line proposed by Mountaire for its facility. They requested the aid of the Socially Responsible Agricultural Project (SRAP), an organization that helps local activists fight against factory farms. When reviewing the documents for Mountaire’s processing-line application, the SRAP opened up a Pandora’s box of problems.

“The community had no idea that their drinking water was contaminated. Had the community known what the risk was back then, we would have seen a much different result.”

“We found a whole past history of violations and Mountaire being out of compliance with public health laws,” Maria Payan, a regional consultant for SRAP, told WhoWhatWhy.

Mountaire Farms had watered fields next to its facility with a mix of blood, feces, feathers, and other by-products from its slaughtered chicken carcasses. This toxic mix delivered far more nitrogen than the crops could absorb, well above the nitrate levels allowed by state regulators.

Lawyers for some Millsboro residents planning to sue Mountaire Farms are moving to intervene in a settlement between Delaware and the poultry producer addressing wastewater violations. https://t.co/WbX9HATZ7Y pic.twitter.com/entJLnYEVt

The nitrates were showing up at dangerous levels in public aquifers in nearby communities. Nitrates are a known carcinogen. They are also known to cause “blue baby syndrome,” a potentially fatal condition for infants.

This assault on the local ecology went back many years. A detailed 2018 study by the Delaware Center for the Inland Bays, a nonprofit with the mission of restoring the state’s inland bays, revealed that the company had been exceeding state limits on nitrate disposal for over a decade.

“It is fairly well documented that Mountaire had at least two or more instances when it was out of compliance with its permits for wastewater,” said Chris Bason, the organization’s executive director and the author of the report.

Some angry residents contend that the nitrate contamination may be related to health problems reported by neighbors. One woman lost a son to acute asthma. Another developed epilepsy. Their health issues, as well as those of others, formed the basis of a federal lawsuit against the company.

Another public interest group, Public Justice, was called in by residents to help them in their campaign against Mountaire.

“The community had no idea that their drinking water was contaminated. Had the community known what the risk was back then, we would have seen a much different result,” Jessica Culpepper, a food safety and health attorney with Public Justice, told WhoWhatWhy.

When asked what was the key issue in this race, state Democratic Party chair Martha Laning replied, “The water that came out of the spigot.”

A little more than half a year later, in early June, 2018, DNREC and Mountaire entered into a consent agreement addressing violations at the Millsboro facility. The decree required the company to pay $600,000 in civil penalties. It also mandated that the company upgrade its wastewater treatment plant, submit to third-party monitoring of all remedial measures, and guarantee clean water access to the public through public water hookups or drilling deeper water wells.

While many of the parties involved in the campaign viewed the consent order as a sign of progress, they cited some shortcomings.

The agreement also may have excluded some of the residents who suffered damages due to nitrate contamination, Bason said.

The Regulators: Watchdogs or Lapdogs?

Activists gave both the federal and state regulators scathing reviews for their handling of Mountaire’s nitrate contamination. They charge that agencies ignored evidence of contamination.

There was a 15-year gap between 2003, when the EPA filed a notice of violation and consent decree against Mountaire, and 2018, when DNREC issued its detailed consent decree requiring the company to take specific action to clean up the contamination.

“The state has often let the citizens down. I have been working in Sussex County, Delaware, with four other different communities experiencing contamination [and] lack of enforcement,” Payan told WhoWhatWhy.

In its recent report, the Delaware Center for Inland Bays also criticized DNREC for its long-standing failure to enforce pollution standards, citing the agency’s inaction in the face of contamination by Mountaire and other Delaware companies.

“This has been going on for two decades but neither the EPA nor DNREC had taken any meaningful action,” Culpepper asserted.

WhoWhatWhy’s request for an interview with a DNREC spokesperson for this article was denied by the agency.

Payan cited one instance of the clout of the industry and impotence of state regulators. When DNREC sampled 30 wells in late 2017, 21 of them tested positive for nitrate contamination.

Nevertheless, the state turned over the remainder of the nitrate testing to Mountaire. The company hired an out-of-state contractor to test the rest of the wells and, according to some well owners, it did not do a thorough, professional job in determining contamination levels. They charged that DNREC had failed to protect the public, and was far too deferential to Mountaire.

The consensus among those interviewed by WhoWhatWhy is that without citizen pressure, the 2018 consent order would never have happened.

Recent regulatory and legal decisions, along with a shift in the political climate, may mean factory farms are no longer free to dump their solid wastes.

“Citizens attending meetings, lobbying elected officials and regulators, [and] holding hearings all created too much pressure to ignore,” Culpepper said.

She said that her organization would not ease up when it came to enforcing the decree, vowing Public Justice would take legal action if the terms of the consent decree were not carried out.

Others concurred. Bason stressed the importance of ongoing inspection, compliance, and enforcement: “You can have good laws, but you have to have good enforcement. Sometimes that is forgotten,” he stated.

A mix of too much industrial agriculture and some bad actors will lead to a series of situations like that in Flint, Michigan, all over the country, Culpepper warned.

In the past, regulators and the courts have not considered manure from factory farms as waste or a threat to public health under the RCRA. The consent agreement between Delaware and Mountaire breaks with the past. But it is not the only recent case to do so.

Public Justice was involved in a similar case in Yakima Valley, Washington. There, cow manure from huge factory-like dairies was contaminating nearby public aquifers. These farms held tens of thousands of milking cows.

On behalf of the community, Public Justice sued under RCRA, asserting that the manure produced from those farms was not a fertilizer but solid waste. The courts ruled for Public Justice, and the dairies decided to settle the case.

The settlement required the dairies to pay an independent contractor to provide safe, alternative drinking water to everyone in a roughly three-mile radius downstream. It will also require the dairies to install double linings for all their cesspools and wastewater-catch basins, and to place strict limits on the application of wastewater to already-saturated fields.

Along with the Millsboro consent decree, this settlement is seen as a potential pacesetter. In 2018, Public Justice filed a similar RCRA suit against Mountaire.

With these new legal and regulatory applications of the RCRA, public interest and community groups are hopeful that they have turned a corner.

The RCRA is now going to apply whenever there is such a high level of waste management that it contaminates a whole aquifer, Culpepper observed.

“This is a very powerful tool. … RCRA is a last resort [when] government won’t do its job. … Without RCRA [the public] would have no way to protect themselves,” Culpepper said.

Citizens can now take action to protect themselves, Payan asserted. Democracy does work but it takes effort and organization, she said.

The US Geological Survey recently came out with two reports. One assessed the impact of nutrients on the ecosystem of the nation’s streams. The other was a study of the impact of agriculture on water quality. The implications of these two reports are inescapable; if left unchecked, the waste from factory farms will have a potentially disastrous effect on public aquifers around the country.

There are signs this issue may be coming into the political mainstream. On Tuesday, June 12, Democratic state senate candidate Caleb Frostman defeated his Republican opponent in a district President Donald Trump carried by 17 points. When asked what was the key issue in this race, state Democratic Party chair Martha Laning replied, “The water that came out of the spigot.”

She was referring to a 2017 study that found 60 percent of the wells in Kewaunee County (Wisconsin) tested positive for fecal matter. In debates, the Republican candidate’s support of deregulation was used against him.

Recent regulatory and legal decisions, along with a shift in the political climate, may mean factory farms are no longer free to dump their solid wastes. The settlements at Yakima Valley and Millsboro could set new public health standards that other factory farms will have to meet.