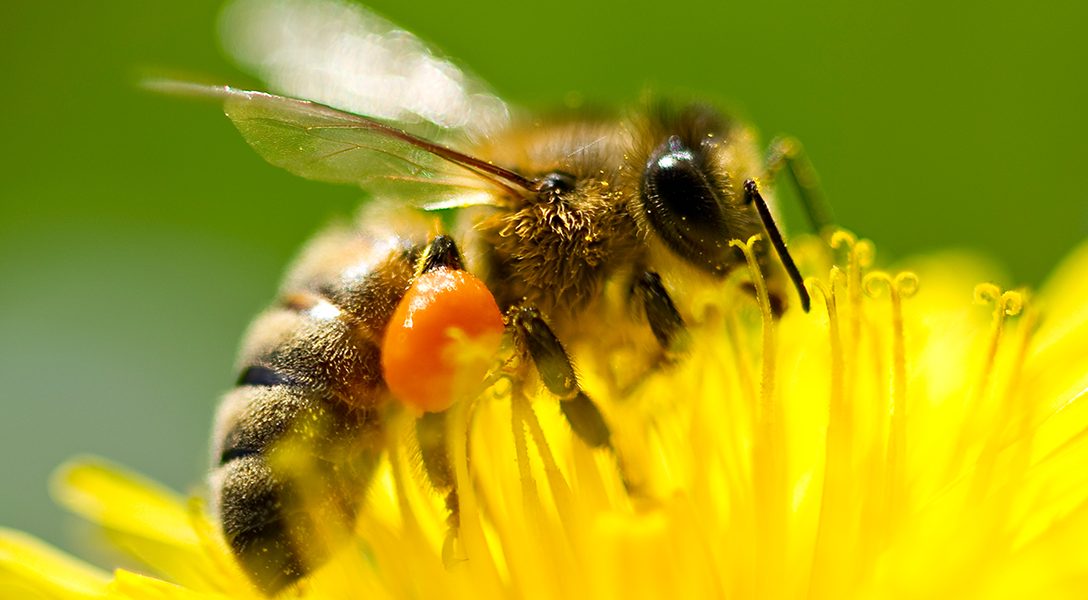 A honey bee feeds on a dandelion flower growing in a pasture near Roseburg. Photo credit: © Robin Loznak/ZUMAPRESS.com
Environment

Humans’ attempts to feed Earth’s booming population are killing honeybees — one of the most important links in the food chain. Without bees to pollinate plants, we would have to do without many fruits and vegetables necessary for a healthy diet. Monsanto touts its agricultural pesticide glyphosate —  better known by its commercial name Roundup — as a weedkiller, but new evidence suggests it’s just a killer.

Glyphosate severely damages beneficial bacteria that live in bees’ guts that promote healthy growth and help bees fight illnesses, according to scientists at the University of Texas in Austin. “We demonstrated that the relative and absolute abundances of dominant gut microbiota species are decreased in bees exposed to glyphosate at concentrations documented in the environment,” the paper reads. Their research demonstrated that many worker bees exposed to glyphosate died when they were later exposed to harmful bacteria that they would readily encounter in the outside world.

Bee larvae are at risk too. They were shown to grow more slowly and die more readily when exposed to glyphosate, in a study conducted by a group of Chinese academics which was released this summer.

Colony collapse syndrome, a term coined over 10 years ago, describes the alarming die-off of bee hives during the past couple of decades. Experts agree that there’s probably not one single cause, but rather a combination of events and practices that leads to hives being left virtually empty.

Bee numbers have been in serious decline since the 1940s, dropping by half since then. Since Monsanto’s Roundup weedkiller was only invented in 1970, it cannot be the only cause.

The first major knock to the bee population came when farmers embraced the practice of planting massive monoculture farms — one crop dominating the countryside as far as the eye could see. Monoculture farming was facilitated by the 20th-century introduction of an altogether different kind of chemical aid: synthetic fertilizers.

In the past, savvy farmers took care to plant crops in rotation — alternating food crops with nitrogen-fixing plants like alfalfa and clover. These restored key nutrients in the soil to ensure that cash crops like corn would thrive the following year. Alfalfa and clover also provide protein-rich pollen for bees. As traditional farming practices like crop rotation diminished in favor of using chemical fertilizer, bee numbers started to fall.

The introduction of glyphosate weedkiller by Monsanto in 1974 escalated the deterioration in bee habitats. It has since been adopted worldwide; odds are that you or a green-thumbed acquaintance of yours has used it. Applications of Roundup increased 100-fold from the late 1970s to 2016, coinciding with the serious decline in bee numbers.

Just a tiny amount of glyphosate can impair bees’ sense of direction, which could account for the deserted hives that beekeepers report. Research has shown that only one of every 10 bees exposed to glyphosate returned to the hive.

Ironically, just as attempts to boost food production by widespread application of chemicals have jeopardized the survival of bees, there has been a 300 percent increase in the acreage of crops planted that need honeybee pollination — including such popular “superfoods” as avocados, blueberries, and cherries. The most extreme case is the almond.

Almonds are completely dependent upon bees to pollinate them. But huge monoculture almond farms lack the diverse food sources needed to sustain bees. To remedy this, a multi-million dollar business has grown to service the almonds’ need for pollination. Every spring, tractor-trailers full of beehives are shipped into industrial-sized almond groves, apple orchards, and other food-producing behemoths. After the honeybees do their job, the hives are shipped to their next gig. The sad truth is that if the bees stayed there any longer they would starve, because once the almond flowers have bloomed and died there is nothing else in these monoculture landscapes for the bees to eat.

In a perverse way, the established link between glyphosate and the escalating collapse of the bee population can be seen as positive, as now there is further proof that this poison is lethal to one of the essential pollinators. Ending or even curtailing its use should improve bee numbers across the world.

The first video this week is a news clip describing the new research regarding Roundup’s effect on bees. The second is a TED talk from Marla Spivak, entomologist from the University of Minnesota, about why bees are in decline.