A forest needs all kinds of trees — even dead ones.

Dead trees, known as “snags,” are some of the most valuable wildlife structures in the forest and help support hundreds of animals.

“A tree really has a second life after it’s been killed, particularly with fire-killed trees, which decay far slower than if a tree succumbs to disease or insects,” says Timothy Ingalsbee, a wildfire ecologist and executive director of the nonprofit Firefighters United for Safety, Ethics and Ecology. “I’ve called them ‘living dead trees.’”

Wildfire-ravaged forests may appear devoid of life from a distance — they’re often described in the media as “destroyed” or “moonscapes” — but the reality is quite different, as more than 200 scientists and land managers wrote in a letter to Congress when the 2018 Farm Bill contained proposals to speed up and expand logging on public lands in response to increasing wildfires.

“Though it may seem to laypersons that a postfire landscape is a catastrophe,” they wrote, “numerous studies tell us that even in the patches where fires burn most intensely, the resulting wildlife habitats are among the most biologically diverse in the West.”

But that hasn’t stopped federal agencies like the US Forest Service and Bureau of Land Management from cutting trees burned in wildfires or selling the logging contracts to private timber companies. Post-fire logging, which is done in forests all over the world, is prevalent in the western United States, where there’s a large amount of federally owned land, a lot of big trees, and frequent fires.

Even the term frequently used by agencies for post-fire logging — “salvage logging” — gives a good indication of how forests are seen after a fire.

“Just about every time you get a burn — a severe burn, especially — the agencies are going to go in and do post-fire logging,” says Dominick DellaSala, chief scientist at Wild Heritage, a nonprofit that focuses on forest protection and restoration. “They’ve taken advantage of the public’s perception that if there was a big burn and it’s a blackened forest, it’s no longer important, so why not just log it.”

The Value of ‘Living Dead Trees’

The ecological reasons for leaving burned trees in a forest are numerous.

For one thing, dead trees help jumpstart the new forest. They’re biological legacies that offer habitat, food, and other resources to bugs, birds, and mammals.

After a fire, life returns within days. Longhorn beetles and other wood borers come to feast on the sap from burned trees while they’re still smoldering. They’re usually followed by the birds that feed on them. In the West’s coniferous forests, that often means black-backed woodpeckers. They build homes for themselves in the burned trees, as well as for other cavity-nesters, including birds, squirrels, and martens. Other birds that flock to burned forests include white-headed woodpeckers, Lewis’s woodpeckers, three-toed woodpeckers, olive-sided flycatchers, Clark’s nutcrackers, and mountain bluebirds.

As wildflowers, shrubs, and morels emerge, more small mammals arrive to eat the newly regenerating vegetation. Then come the larger mammals and birds like spotted owls to prey on these smaller animals.

Mountain arnica blooming in profusion near the Siskiyou Crest at the headwaters of East Fork Indian Creek following the 2020 Slater fire. Photo credit: Courtesy of Luke Ruediger / The Revelator

Snags provide areas for foraging, nesting, roosting, and denning. They’re particularly important for birds — one-quarter of all birds in the West’s forests rely on dead trees at some point in their lives.

When snags fall, they also have benefits. Downed trees can help retain moisture, add nutrients to the soil, and become “nurse trees,” out of which new saplings grow. “An astounding two-thirds of all wildlife species use deadwood structures or woody debris for some portion of their life cycles,” wildlife biologist Richard Hutto of the University of Montana wrote in a study for Conservation Biology. They can even help provide habitat for fish and other aquatic animals if they fall into creeks and rivers.

“The snags and the downed logs are all part of the rebirthing of a forest — a process that eventually gives you an old-growth forest,” says DellaSala.

While some people may think a wildfire is a disaster for a forest, DellaSala says the real disaster is what can happen if the area is heavily logged after such an event. The process can impede the forest’s recovery by compacting soils and killing the associated microbial communities that are important for a healthy, biodiverse ecosystem.

“A burned forest is very sensitive to additional disturbances,” says Ingalsbee. “Bare exposed soil is very erosive and when you’re slamming large logs and dragging them on steep slopes, then you lose forest soil and that is more or less a permanent loss in a human lifetime. It takes a long time to develop a fertile soil bed.”

Logging trucks and equipment can also kill or disturb native seed banks that would naturally regenerate after fire and lead to new growth. The associated roadbuilding can cause water-quality problems and degrade habitat. 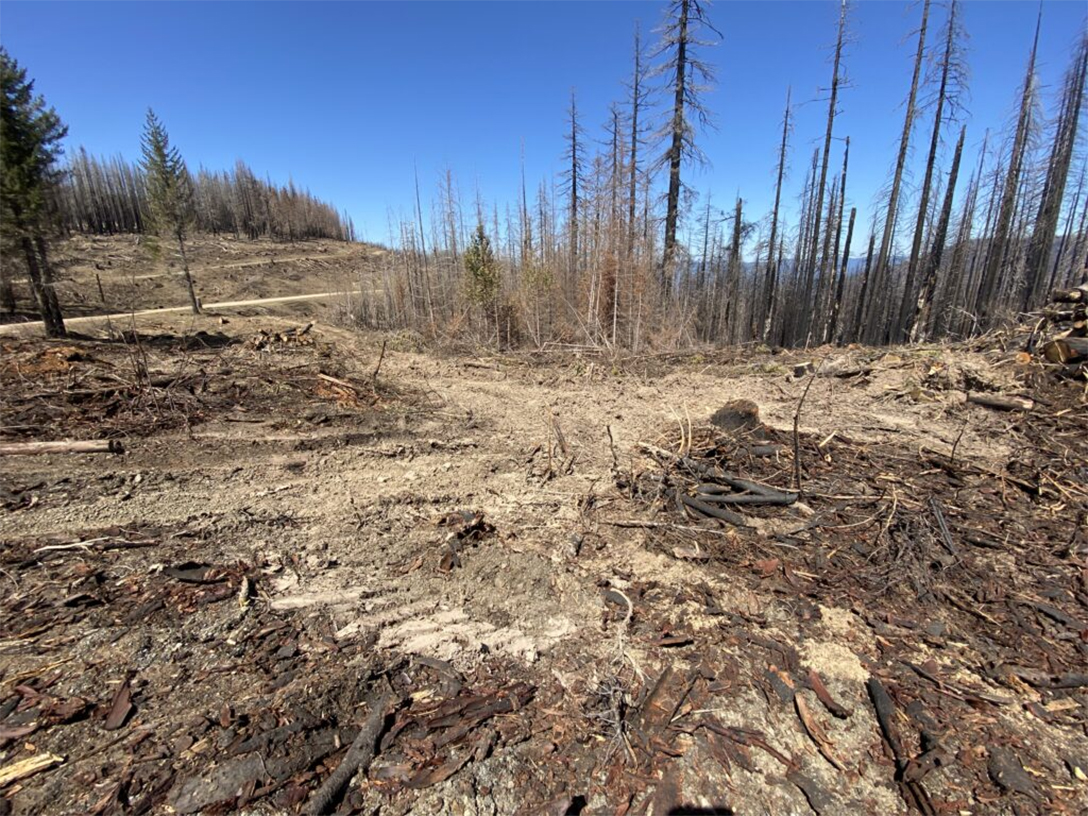 And it’s not just the initial clearcutting that’s problematic — it’s also what follows, which is usually intensive management with tree planting and herbicides.

“Instead of having this natural diverse mosaic of vegetation patterning that comes in after a fire with patches of hardwoods and patches of conifers and open areas where flowering species can thrive,” says Luke Ruediger, conservation director of the Klamath Forest Alliance. “The agencies tend to come in and plant these even-aged, evenly spaced, and relatively densely packed plantation stands that then can increase fire risks and are more biologically sterile than the naturally regenerating habitats that surround them.”

These cumulative impacts add up to a lot of reasons not to log a forest after a wildfire.

“I am hard pressed to find any other example in wildlife biology where the effect of a particular land-use activity is as close to 100% negative as the typical post-fire salvage-logging operation tends to be,” wrote Hutto in the Conservation Biology study.

So why does post-fire logging persist? Mostly, it’s money.

“Harvesting timber following fire is usually an economic undertaking and rarely a restorative activity in the sense of ecological restoration,” a 2009 Forest Service study makes clear.

Fire-killed or damaged trees are still seen as valuable if they’re cut within a couple of years. Usually there’s just a thin layer of char on the outer bark of the trees that can be stripped off. The inside wood is then used for lumber or other wood products, just as green-cut trees would be.

While private companies can make good money, government agencies also bring in a fair amount. “The federal government pulls in about $150 million annually from selling the timber in national forests, about one-fourth of which comes from post-fire logging,” reported Forbes.

But the math doesn’t always pencil out for taxpayers, who also foot the bill for roadbuilding, replanting, herbicides, and the other treatments that follow. A 2006 report by the Government Accountability Office found that salvage logging after the 2002 Biscuit Fire, which burned 500,000 acres in California and Oregon, was a $2 million loss for taxpayers.

The other reason is safety. Fire-killed trees in areas where people drive or recreate can be hazardous. That’s why popular hiking trails are often closed following wildfires when trees are at risk of falling.

“A number of years ago they were logging about 50 feet on either side of the road and now they’re going to 200 and 300 feet, which starts to look and feel a lot more like unit logging than hazard tree removal,” says Ruediger. Much of this work is done using a “categorical exclusion” under the National Environmental Policy Act, which doesn’t require an environmental assessment or environmental impact statement. That makes the approval process quicker and allows cutting to begin before fire-killed trees are too compromised by bugs and rot to be used for lumber. 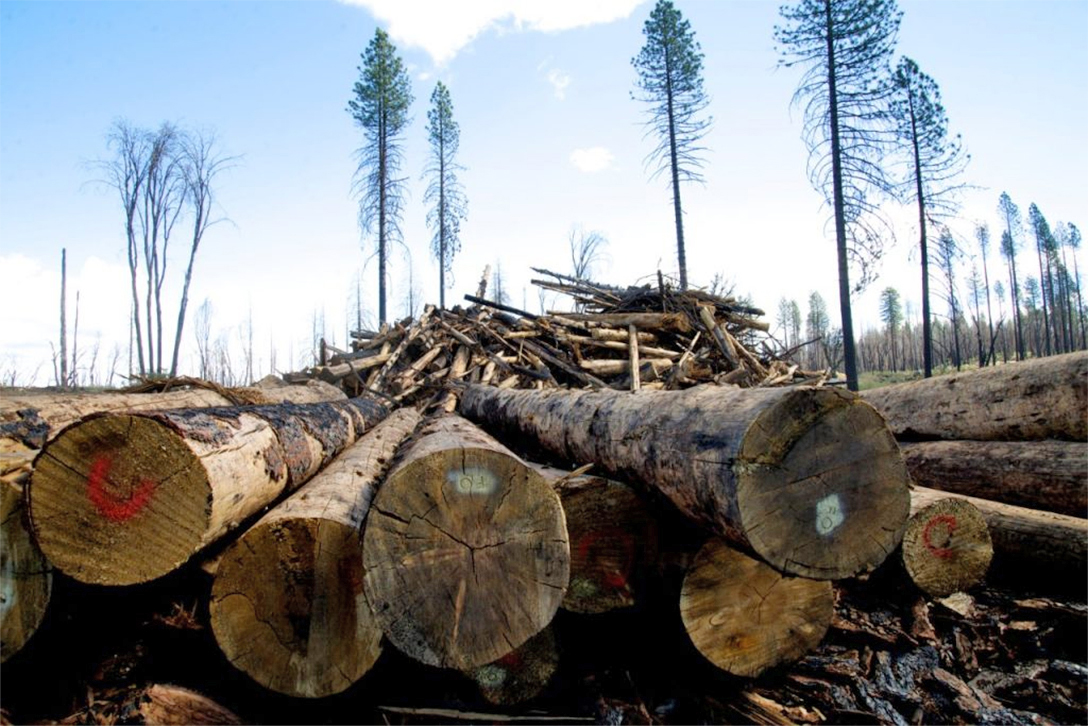 “Agencies were proposing a lot of categorical exclusions for roadside logging, calling it ‘road maintenance,’” he says. Last year in Oregon, for example, the Forest Service planned to allow commercial logging 200 feet on either side of 400 miles of Forest Service roads in areas burned during the 2020 Labor Day fires in the Willamette National Forest.

The agency said the 20,000-acre plan fell under a categorical exclusion for “repair and maintenance” of roads in the national forest. But three conservation groups sued, saying it was nothing more than a standard logging project disguised as a hazard tree removal effort and should be subject to environmental review.

A federal judge agreed, writing in his decision that, “This Project allows commercial logging that, at least at this stage, will almost certainly have more than a minimal impact on the environment.” His order halted the project in November 2021, and the agency formally withdrew the plan in January 2022.

In a similar case last year, the Klamath Forest Alliance legally challenged a 4,000-acre logging project in the Rogue River-Siskiyou National Forest following the 2020 Slater fire along the California-Oregon border. The group contended that many of the areas proposed for logging to remove hazard trees were along backcountry roads that saw little traffic. The Forest Service settled with the organization out of court, agreeing to limit cutting to only important roadways where there are imminent safety hazards.

Legal challenges from environmental groups have helped prevent some unnecessary logging of snags, but DellaSala admits that a much bigger effort is needed to change hearts, minds, and policy. Getting the public, legislators, and agency staff to see the benefit of a burned forest isn’t easy, because wildfires — pardon the pun — are a heated issue. 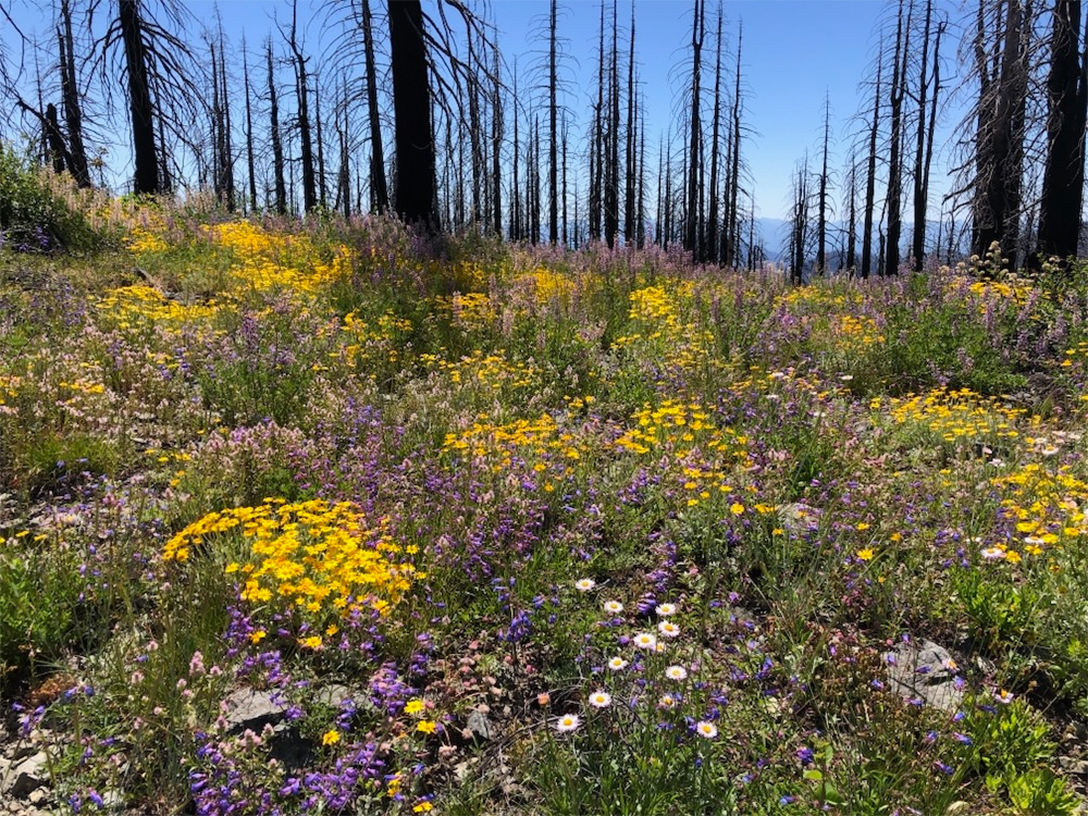 His own understanding of the value of burned forests changed after three decades of studying forest ecosystems. In 2012 he went for a hike with his daughter near their home in Ashland, OR. The area had been burned a decade earlier in a wildfire, but they were surprised to find the area alive with wildflowers, dragonflies, butterflies, songbirds, and woodpeckers.

“There was more sound in that high-severity burn patch than I was used to hearing in old-growth forests. It was so alive. It was not a moonscape, it was not a catastrophe,” he says. “I had to recalibrate my understanding of what a forest is.”

Ruediger has seen the same thing in the mountains of California and Oregon.

In July he hiked through forest burned two years prior in the Slater fire and found a superbloom. He wrote of the experience:

Bursting with vibrancy, life and unbelievable color, the flowers are currently so thick that you can see bright yellow swaths of Oregon sunshine (Eriophyllum lanatum) and mountain arnica (Arnica latifolia) blooming from ridges away. The butterflies, bees, pollinating beetles and flies swarm the sea of blossoms in a frenzy, collecting pollen and nectar. Songbirds dart about in the regenerating vegetation, eating insects and wildflower seeds. Deer and elk nibble on the herbaceous growth and the abundant, fire-coppiced trees and shrubs. Bears graze on the greenery. Raptors soar above the snag forest looking for prey species, whose populations have exploded since the fire, and woodpeckers drum against the standing snags in a repetitive chorus, noisily foraging for ants, grubs and other insects.

And that experience, he says, is not uncommon.

“I think that people will be shocked and surprised by how much life there is in a lot of these areas that they were told were devastated by wildfire,” he says. “My experience is that as long as there isn’t post-fire logging, in a lot of these situations the regeneration comes back — the trees come back. Sometimes that just takes more time than people are willing to give it.”

This story by Tara Lohan was originally published by The Revelator and is part of Covering Climate Now, a global journalism collaboration strengthening coverage of the climate story.