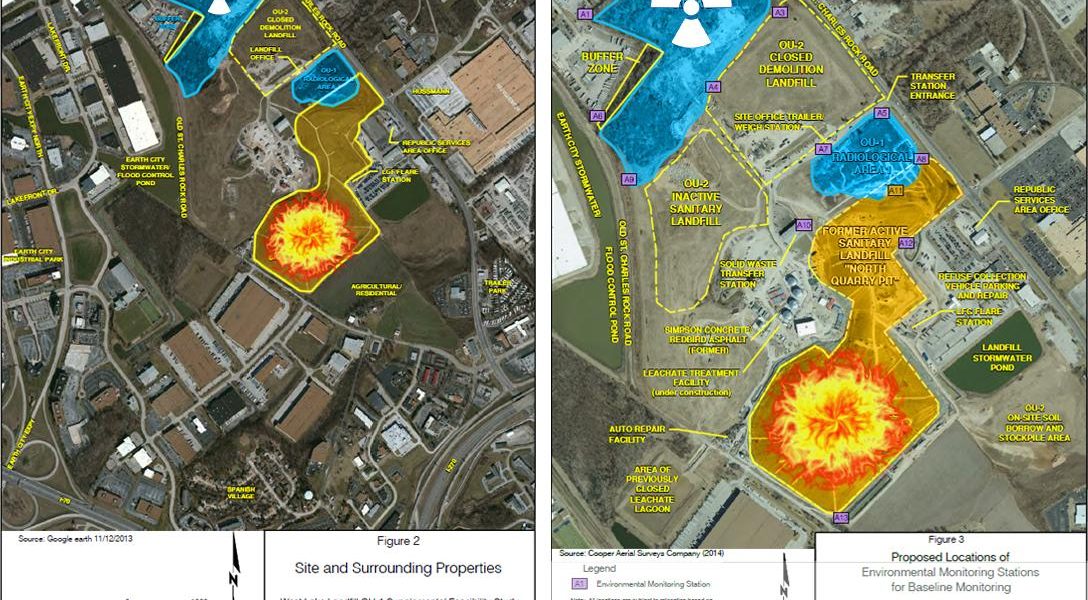 Dawn Chapman doesn’t barbeque much anymore. The mother of three is concerned about the rising levels of cancer in Bridgeton, Missouri, and the surrounding suburbs nestled together just north of St. Louis. But the source of the cancer, she says, isn’t in the meat. It’s in the air.

Bridgeton’s West Lake landfill sits atop 40,000 tons of radioactive waste, illegally dumped there nearly five decades ago. Much of the buried material was left over from experiments conducted as part of the Manhattan Project, the top secret crash project during World War II to build an atomic bomb. Now, an underground fire in a connected landfill could spread to the buried cache, which could send radioactive waste into the local air and water supply.

Or, if local EPA officials and geological experts are to be believed, maybe not. There are conflicting studies commissioned by the various parties in this saga that, maybe predictably, have produced very different results.

Since the fire began years ago, residents, activists, politicians and the landfill owners have battled over the smell coming from the underground fire and the future of the radioactive waste buried several hundred yards away.

Where There’s a Smell…

In early December 2009, a subsurface thermal reaction (better known as an “underground fire”) started in the Bridgeton landfill. These types of fires are self-sustaining, consuming the fuel around them (in this case, trash) and releasing large amounts of heat and gases into the atmosphere.

Republic Services, which owns the Bridgeton site through a subsidiary company, reported high levels of hydrogen and carbon monoxide coming from the site and noted subsurface temperatures as high as 300 degrees Fahrenheit in parts of the landfill.

Residents of Bridgeton and the other middle-class suburbs near Lambert-St. Louis International Airport started complaining about the foul fumes in early 2012.

Complaints about headaches, nosebleeds, aggravated asthma and other respiratory ailments had begun years earlier. But even these concerns paled before fears of the fire’s possible path toward the radioactive waste.

Since public debate began over the landfill, the major players have agreed on only two salient facts: a subsurface fire is burning in the Bridgeton landfill, and that fire is only a few thousand feet from a radioactive-waste dump. Virtually everything else about the situation is under dispute.

Republic Services and local authorities have vehemently disagreed about how close the subsurface fire is to the radioactive waste — and how fast it is approaching that waste.

In a January 2014 report, Republic claims the fire hadn’t yet spread into the north quarry of the Bridgeton landfill, the part closest to the radioactive cache. Republic also claimed the fire, which started in the south quarry, isn’t moving north at all. This claim is backed by local EPA officials.

However, a landfill fire expert commissioned by Chris Koster, Missouri’s attorney general and presumptive Democratic candidate for governor in 2016, drew a far more dire picture. Koster and the Missouri Department of Natural Resources claim the fire is moving north, toward the radioactive waste, at a rate of one to ten  feet a day, depending on how its progress is measured.

Dueling experts have also clashed on whether the fire has been releasing dangerous radioactive dust into the air. Republic and the EPA say no radiation has spread beyond the landfill proper, but a report from Koster claims radioactive contaminants have been found in nearby trees, groundwater and in the northern reaches of the trash site.

One putative hotspot is Coldwater Creek, a small tributary of the Missouri River that runs through cities near Bridgeton. Local residents say thousands of their neighbors living near Coldwater have been diagnosed with cancer in the past few years.

Both sides have also weighed in on what would happen if the subsurface fire does reach the radioactive waste. Republic, through a report prepared by outside contractors, says this will result in no new health risks, because the waste is not “explosive.”

In a report of their own, EPA administrators in Cincinnati agreed with Republic that there was no chance of the waste causing an explosion, but they said that if the fire reaches the waste, it could trigger a chemical reaction and send massive amounts of pollutants into the air and the surrounding groundwater.

Local activist Ed Smith, of the Missouri Coalition for the Environment, told WhoWhatWhy that these pollutants would include radon and other known carcinogens. But he also argued that even without the threat of fire, the buried waste poses a serious health hazard.

A tornado could expose and spread radioactive substances, and if an earthquake hits the region, Smith says, the waste could become liquefied and seep underground into local floodplains and other bodies of water .

Smith calls Republic’s spokesmen and lawyers outright liars for claiming that leaving the waste as is would have no environmental impact.

Russ Knocke, Republic Services’ Vice President of Communication & Public Affairs, told WhoWhatWhy that the attorney general’s office is basing its lawsuit on incorrect analysis of landfill data. He says Tony Sperling, the lead expert for the state, recanted several key parts of his testimony during a deposition, including previous statements that the fire had reached the north quarry or is close to the radioactive material. In that deposition, Sperling also said the fire could not enter the north quarry under current water conditions in the landfill.

Knocke flatly denied that the underground fire is causing the nasty odor, saying there are other known odor sources in the area that are required to report air emissions data to the EPA. He also said removing the waste would nearly double the risk of cancer in the community, while putting removal workers themselves at high risk.

The Politics of Cleaning up

Meanwhile, Dawn Chapman and other local activists have demanded the EPA or the Army Corps of Engineers remove the waste as quickly as possible.

Chapman, who is a co-founder of the activist group Just Moms STL, told WhoWhatWhy that the 18,000 residents who follow the group on Facebook disagree among themselves on what to do with the radioactive waste, but they all want a permanent fix from the Army Corps of Engineers, and soon.

She says that residents, especially children, frequently suffer from nausea, bloody noses and other respiratory illnesses.

While some of her neighbors talk about simply moving away from the landfill, Chapman feels an ethical obligation to stay and protest Republic’s actions so future homeowners and residents can live without compromising their health.

“If I sell my house, I have to say, ‘by the way, you can’t barbeque on the back deck, you can’t let your kids out [on days when the odor is strong]’”, she says. “Why would I pass the cheese on to another family?”

Maria Chappelle-Nadal, a state senator whose district covers Bridgeton, filed a bill requiring the state to purchase homes within three miles of the landfills at market value if the owners decide to move. She supports having the Corps of Engineers remove the waste. However, her bill faces strenuous opposition in the statehouse, where Republicans hold supermajorities in both chambers.

The Coalition To Keep Us Safe, a PAC opposed to removing the radioactive waste, openly says on its About page that it is supported by Bridgeton Landfill LCC, the subsidiary of Republic Services.

State Rep. Todd Richardson, the newly-elected House speaker, is listed as a supporter on the Coalition’s site. He received a $2,500 donation in 2015 from Republic Services. While State Senate Majority Leader Mike Kehoe, another Coalition To Keep Us Safe supporter, hasn’t received a direct contribution, Republic donated $25,000 to the Missouri Senate Campaign Committee last year, which distributes funds to Republican Senate candidates in competitive races.

Missouri’s federal congressional delegation has pushed for the EPA to cede control of West Lake to the Army. In rare bipartisan fashion, representatives Lacy Clay (D), Ann Wagner (R) and senators Roy Blunt (R) and Claire McCaskill (D) sponsored or co-sponsored efforts to bring in the Army Corps of Engineers. The Senate version of the bill passed the chamber earlier this year.

What’s Next for West Lake?

The next court date for Missouri Attorney General Koster’s suit against Republic Services is set for March 2016.

Meanwhile, Kurt Schaefer, a state senator and a Republican candidate for attorney general, has added an amendment to a bill that would  grant landfills in the state immunity from certain citizen-initiated lawsuits. Schaefer is currently a partner at Lathrop & Gage, which is representing Republic against Koster’s lawsuit, although he is not listed as an attorney on the case. He denies his amendment is related to the Bridgeton landfill controversy.

The EPA is currently taking public comments on the future of the landfill and will make its final ruling in 2017. Until then, Dawn Chapman and the families of Bridgeton will wait for fresh air before they light their grill again.

Correction: A previous version of this story attributed the statements made by Russ Knocke, Republic Services’ Vice President of Communication & Public Affairs to “Richard Callow, a spokesman for Republic.” WhoWhatWhy regrets this error.

I feel like it’s the end of the world as we know it. Let’s give a big hand to the leaders and their followers who just did all of this and don’t seem to care one little bit. Seems pretty serious to me.

Tri-cities in south east Washington State is far bigger and much worse , yet never mentioned. Then there is Nevada, Harry Reid has never seen a train load of nuclear waste he wouldn’t store in that state , for a small fee of course.

another example of poisoning people in America… remember the Love Canal?

Trouble is that there are sites like this pretty much every single place nuclear industrial activities were going on. *All* of them. Apart from the TRIGA research reactors, I can’t find a properly handled “clean” site anywhere in the US, and even the TRIGAs are toxic waste which nobody knows how to dispose of.

Two avenues for safety that will cost more than the original cost savings in disposing the radioactive waste are to dig a fire break or dig up and remove all the radioactive waste. In the meantime the fire will still contaminate the air and pose a health risk to those near by who should launch a class action suit for present and future negligence and harm.

Great article. More evidence that every nuclear plant built adds toxicity to the environment, and eventually become a permanent dead zone. The whole nuclear industry was a profiteers’ dream facilitated by bad governance. The technology has never existed that allows for these things to operate safely even in the short run. Chernobyl or Fukushima is the ultimate end for all nuclear facilities.