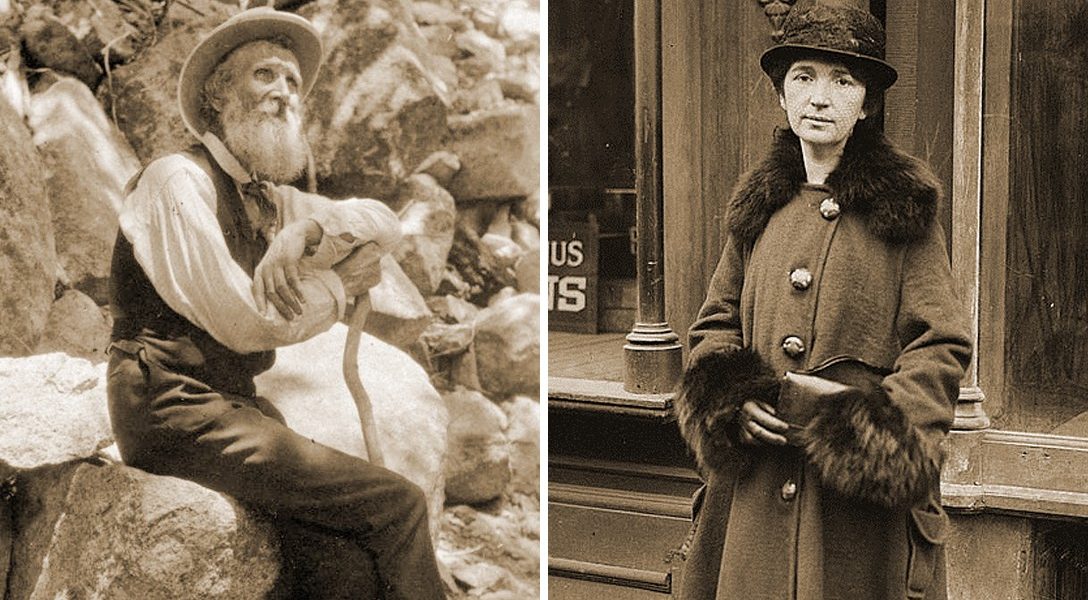 At first you might not think the Sierra Club and Planned Parenthood of New York have much in common. But dig deeper and you can see why the two organizations are grappling with the racism of iconic figures John Muir and Margaret Sanger, amid a national reckoning on race.

Both groups have their roots in the American progressive movement of the early 20th century, which was led by pioneering white activists who promoted major reforms but often clung to racist beliefs, including eugenics.

Last week the Sierra Club announced it would begin to distance itself from its first president, the conservationist John Muir, whose work is credited with leading to the creation of national parks such as Yosemite, the Grand Canyon, and Redwood. The organization cited “derogatory comments” Muir made about African Americans and Native Americans — at various times he called them dirty and lazy — though it conceded his views evolved later in life.

The Sierra Club also cited Muir’s friendships with white supremacists and eugenicists Henry Fairfield Osborn, David Starr Jordan, and Joseph LeConte. Jordan, the founding president of Stanford University and a member of the board of directors while Muir was the Sierra Club president, was a racist and a proponent of eugenics, advocating forced sterilization laws targeting Black, Latinx, and Indigenous communities, as well as the poor, the disabled, and the mentally ill.

Richard White, a professor of American history at Stanford, was surprised by the timing of the statement from the Sierra Club, saying, “This kind of stuff has been very well known for a long time.” In regard to Muir and Jordan, he said, “there is nothing extraordinary in the things they said. These are pretty conventional 19th-century (white) attitudes,” attitudes that wouldn’t fly today.

White elaborates by explaining Muir’s opinion of Native Americans. Although Muir respected Native Americans for their skills as mountaineers, he simultaneously viewed them as inferior. “There is a sort of admiration of their skills but at the same time he doesn’t admire them at all because of his fairly conventional ideas about 19th-century progress and civilization,” White said.

Is Racism Embedded in Conservationism?

Most problematic for White is that Muir’s attitudes toward Native Americans appear almost central to his vision of conservation. Muir believed America was a divine and pristine wilderness untouched by humanity, even though the forests were home to Native Americans for thousands of years. Actually, Native Americans were stewards of the land, altering landscapes to benefit themselves and the ecosystem, using fires for wildlife management and fire-prevention, creating the picturesque landscapes Muir romanticized. “Believing that the land is untouched means you have to exclude,” White explained. “When you have native peoples who not only alter it now but have altered it for a long time, they have to be taken out of places where they have lived,” White said.

White challenges people to think deeply about the racial constructs that allowed national parks to be created. “What happens when you create a wilderness area and you’ve eliminated people to do so? Why was it people like John Muir thought this was permissible?” he asks. Native Americans were the first to establish trails in the US, some of which are still used today by park visitors and staff. Photo credit: Adapted by WhoWhatWhy from NPS

Michael Brune, executive director of the Sierra Club, believes that those protecting the outdoors practiced willful ignorance of the history surrounding Native Americans being forced off their lands. In his statement on Muir, he also points out that often those who today can afford to focus on preserving the wilderness are those who are insulated from systemic racism, who may also call upon the organization to stay in its lane and stop talking about issues of race, equity, and privilege.

That view is echoed by Robert Bullard, an environmental justice advocate and professor at Texas Southern University. When Bullard was to receive the John Muir award from the Sierra Club in 2013, he had reservations about accepting. “I knew his (Muir’s) history, views, and ideology on race, and the people he surrounded himself with,” Bullard said. “John Muir was no friend to native indigenous people and Black people.”

Bullard said he finally agreed to accept with the provision that the Sierra Club work to undo and erase their legacy of racism, which he asserted has persisted in the issues it has avoided, including environmental racism.

White agrees that the issues of privilege go back to the beginning. Nativist tendencies have always existed in conservationist circles, according to White, who explained that the conceptual origins of “wilderness” were a response to a fear of a decline in white masculinity in the 19th century. “The reason or motivation is that wilderness is seen as a way to rejuvenate white manhood,” he said. The decline was in the white middle-class, and “the restoration of their manhood by going back into the wilderness was always associated with the sense that they were losing control of their own country, largely in terms of immigrants,” according to White.

“It wasn’t very long ago,” he noted. “when there was a strong anti-immigration emphasis amongst a section of the membership of the Sierra Club which was clearly racially motivated. There has always been a strain of those things.”

On Muir’s associations with eugenicists, or their presence on the Sierra Club board of directors, Worster said, “It’s important to remember that John Muir didn’t found the Sierra Club, and he did not recruit these people as members. He was recruited to be the president.” Worster questions the Sierra Club’s charge against Muir, calling it “guilt by association.” Eugenics was front and center when Planned Parenthood of Greater New York (PPGNY) announced last week that it would remove the name of Margaret Sanger, its founder and a pioneering birth control advocate, from one of its health centers, citing a racist legacy and eugenics advocacy.

“The removal of Margaret Sanger’s name from our building is both a necessary and overdue step to reckon with our legacy and acknowledge Planned Parenthood’s contributions to historical reproductive harm within communities of color,” said Karen Seltzer, board chair at PPGNY. “Margaret Sanger’s concerns and advocacy for reproductive health have been clearly documented, but so too has her racist legacy. There is overwhelming evidence for Sanger’s deep belief in eugenic ideology, which runs completely counter to our values.”

Despite this narrative, Sanger still has her supporters in academia. Jean H. Baker, a professor of history at Goucher College in Baltimore, is one of them. “In the current climate of mea-culpas, Planned Parenthood of New York fell into a trap,” she said. Baker explained that the Roman Catholic Church and evangelicals have been assailing Sanger’s reputation in order to attack birth control for years. “The way to do that,” according to Baker, “was to call her racist, which is easy to dispute, and a eugenicist,” which has racist roots and is much harder to dismiss.

Regarding claims that Sanger was racist, Baker explained that to believe birth control was an effort to destroy African Americans was a false claim. Sanger is often quoted as saying, “We do not want word to go out that we want to exterminate the Negro population, and the minister is the man who can straighten out that idea if it ever occurs to any of their more rebellious members.” Regarding this infamous quote, Baker emphasizes context. “She was alert to the fact that some were claiming birth control as genocidal.”

In that context, Sanger was combating that narrative, allying with Black ministers who agreed with her. “The number one priority for Sanger was birth control,” Baker said. In the 1930s, Sanger created a birth control clinic in Harlem because “she wanted Black women to have the same access to what she considered to be the tool for human improvement as white women did.”

Peter Engelman, associate editor of the Margaret Sanger Papers Project, added that, “[Sanger] responded to calls from Black women and Black leaders within the Black community particularly in Harlem to help them increase access to birth control.”

Baker noted that Sanger was also friends with Black leaders such as W.E.B. Du Bois and E. Franklin Frazier, with whom she discussed opening birth control clinics in the South. Sanger also advocated for desegregation.

Is the Healthcare Debate Really About Sex?

However, when Sanger began her “lonely battle to change American attitudes towards birth control, she wanted to get the support of eugenicists,” Baker said. “She published some of their articles in the Birth Control Review. She certainly knew what they were after and she never disclaimed what they were doing. Somewhat naively she got caught up in this movement.”

At the same time, many eugenicists were against what Sanger was doing, according to Engelman. Eugenicists wanted middle- and upper-class white families to have more children. “Most eugenicists opposed her work, finding it too radical and arguing that birth control mainly reached educated women and resulted in smaller families among the ‘better classes.’”

During the progressive era, many white leaders supported eugenics, which was unsurprisingly biased with racism. Supporters included presidents Theodore Roosevelt and Herbert Hoover.

Eugenics was seen as a method to address social problems or manage individuals deemed socially undesirable. Individuals with supposedly inferior genes, which eugenicists said included those of certain races or individuals with mental or physical disabilities, were to be discouraged from reproducing. Thirty-two states had eugenic sterilization laws, and the United States’ eugenics programs predated and are said to have inspired those in Nazi Germany. Many eugenicists feared the United States’ immigration policies would threaten Nordic racial preservation, comparing immigration to the introduction of an invasive species.

The legality of eugenics-based laws was reaffirmed in 1927 in Buck v. Bell, a case in which the Supreme Court ruled in an 8-1 decision that compulsory sterilization of the unfit was constitutional. In his majority opinion, Justice Oliver Wendell Holmes infamously wrote, “three generations of imbeciles is enough.” The majority included former President William H. Taft, then chief justice of the Supreme Court.

Engelman is critical of Sanger’s opinions on the mentally and physically disabled and notes that her writings on eugenics primarily concern “negative eugenics,” which discourage the “unfit” from procreating. “For Sanger, the unfit included people with physical or mental ‘defects,’ alcoholics and drug addicts, and those too poor to clothe, feed, and shelter a child,” Engelman said.

Sanger, however, disagreed with eugenicists who broadened “unfit” to include groups based on race, ethnicity, and religion, Engelman explained, adding, “She never defined fitness for parenthood in racial terms. She wrote in 1934, ‘If “unfit” refers to race or religion, then that is another matter which I frankly deplore.’”

Still, Engelman maintained that, “Although she was not a racist and did not at any time pursue racist policies, she did look the other way when others made racist statements. She also did not hesitate to make use of flawed and often racist social science research to make sweeping generalizations about the poor and disabled.”

Referring to the sometimes controversial reevaluations of figures of the past, including both Sanger and Muir, Bullard summed it up this way: “There are a lot of people with a lot of baggage in their history. What people are doing today is running these people through the racial justice lens. Some people see that as unfair. I don’t.”