In a Drier Future, What’s the Best Way to Secure Water?

This story by Kate Wheeling originally appeared in Yes! Magazine and is republished here as part of Covering Climate Now, a global journalism collaboration strengthening coverage of the climate story.

Once again, California is in a drought. Much of Northern California and the Central Valley are experiencing “acute water supply shortfalls,” and the Sierra Nevada snowpack, a critical water source for Californians up and down the state during the dry season, is all but gone already — just 6 percent of normal for this time of year.

California’s water system, already stressed by the dueling needs of massive urban centers and its agricultural sector, is crumbling in the face of climate change. The state’s climate is becoming increasingly unstable, oscillating between periods of drought and deluge, which is making the water supply hard to predict. To make sure they can deliver enough water to California’s farms and cities going forward, water managers are focusing on shoring up local supplies.

But not everyone agrees on the best way to do that. Nowhere is this clearer than in Orange County’s Huntington Beach, the site of a proposed desalination plant.

First proposed in the late 1990s by Poseidon Water, which has developed several large-scale desalination facilities around the world, including one just down the coast in Carlsbad, the Huntington Beach project has been beset by shifting permitting regulations, legal challenges, and political turmoil for decades.

The plant inched closer to reality in April with the approval of a key permit from the Santa Ana Regional Water Quality Control Board, after a set of marathon hearings that showcased the controversy surrounding the plant. The sessions began with the board discussing calls for three members to recuse themselves after they privately communicated about the project with California EPA chief Jared Blumenfeld, a supporter of the plant, and they ended with the vice chair visibly sipping from a wine glass just before the vote.

The decision is likely to see a legal challenge from environmental justice advocates, who say desalinated water will be more expensive, more energy-intensive, and more harmful to marine ecosystems when compared with other strategies for increasing local water supplies.

The proposed plant would threaten marine life by dumping briny water into the ocean, but it would also provide Orange County with 50 million gallons of water per day. 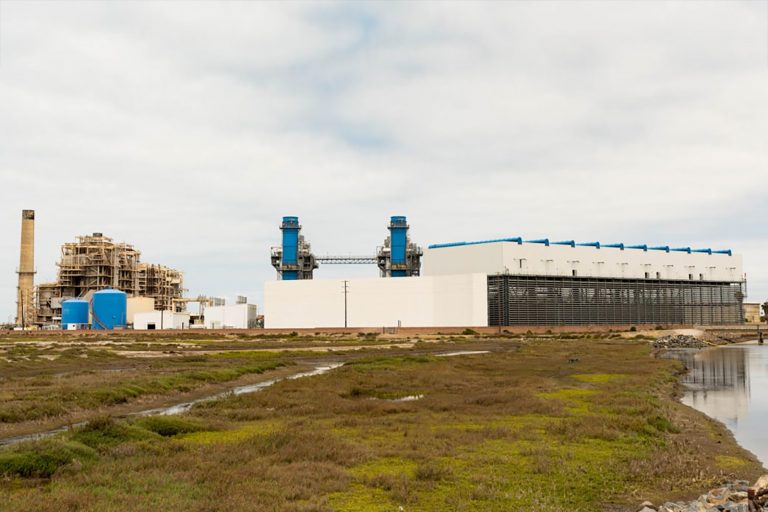 “It’s an insurance policy,” said Scott Maloni, Poseidon Water vice president. “The whole purpose of the desal plant is to diversify the water supply portfolio to reduce the need to import water from Northern California into Southern California.”

While everyone agrees that every California city needs diverse water supplies, critics question whether the desalination plant is the right solution.

“First and foremost, it’s just not needed,” said Andrea León-Grossmann, climate action director at the nonprofit Azul. Indeed, though 41 counties across Northern and Central California are under a drought emergency, Southern California has a record amount of water on reserve, according to the Metropolitan Water District of Southern California.

Prompted by periodic droughts, Southern California has made great strides in water storage and efficiency. The region is using roughly the same amount of water as it was about 40 years ago, when the population was much smaller.

“California has among the most rigorous efficiency standards for appliances and fixtures,” said Heather Cooley, director of research at the Pacific Institute, a global water think tank. “New homes that are built have to be equipped with more efficient devices, and then as the old devices wear and break, people can only purchase more efficient devices.”

These indoor efficiency standards were born out of California’s 1987-1992 drought, but not until the more recent, more severe drought from 2012-2016 did the state begin making progress on outdoor efficiency, encouraging homes and businesses to swap out water-intensive grass lawns for drought-tolerant, native plants.

Cooley said the state could do more to encourage residents to adopt water-saving appliances and drought-tolerant plants by rolling out new incentives, smarter rate structures, and educational campaigns. Others agreed. 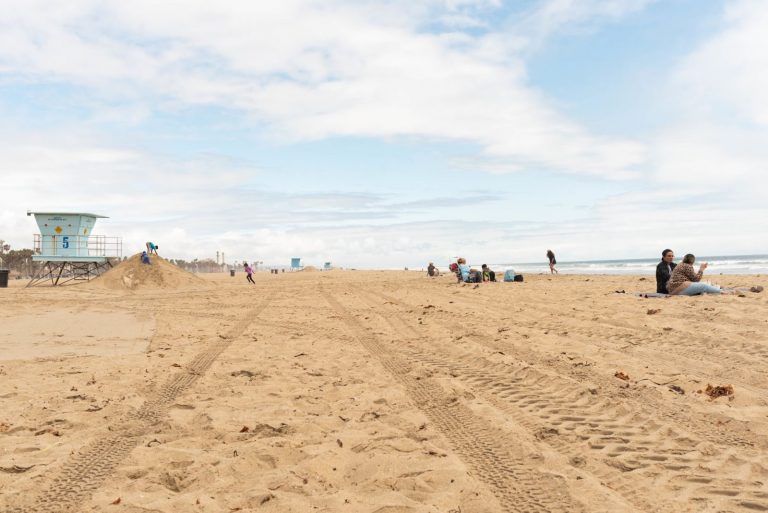 “Desal should be the option of last resort,” said Newsha Ajami, director of urban water policy at Stanford University’s Water in the West program. “There are so many other inefficiencies in the system that can be fixed to potentially harness more water.”

California loses billions of gallons of treated water to leaks from aging pipelines and infrastructure, for example, and the few times of year when the state does have excess surface water — when winter storms flood its waterways — much of that freshwater runs out into the Pacific.

Helen Dahlke, an associate professor at the University of California-Davis, is researching how to capture that excess surface water and turn it into groundwater by flooding croplands in Northern California and the Central Valley.

“In order to make use of the volumes we’re talking about — and that can be 1 or 2 million acre-feet a year — you have to spread it out over a large area, and the only large area we have in the state is our agriculture land,” Dahlke said.

Capturing that amount of water would require millions of dollars in new infrastructure. Dahlke is studying what that would look like in practice by working with farmers to use existing irrigation equipment to divert floodwaters onto their fields, allowing the water to percolate into the ground to recharge aquifers. Through this process, she can determine which kinds of crop fields can stand up best to flooding.

Because it relies on gravity, rather than pumping, it’s a relatively cheap way to recharge groundwater, according to Dahlke, which is why it’s becoming a critical component of many areas’ plans to comply with the Sustainable Groundwater Management Act, a 2014 law that requires overdrafted groundwater basins to get back to sustainable levels by 2040. The more that overdrafted basins can do to bank groundwater, the more resilient the state will be to future droughts.

Cities can benefit from stormwater capture as well. By one estimate, 1 inch of rain in Los Angeles County can produce about 10 billion gallons of runoff, which historically has been funneled into sewers that drain out to sea. Many cities are now developing “green” infrastructure, including permeable pavement and vegetation that allow water to penetrate the ground where it falls. Some are also deploying rooftop cisterns to collect rainfall or diverting runoff to areas where it can infiltrate and recharge groundwater.

Experts say that recycling wastewater, though more expensive than passively capturing stormwater, is also cheaper and less energy intensive than desalination, and Orange County is already a leader in wastewater recycling.

The county’s Groundwater Replenishment System takes in wastewater that would have been discharged into the Pacific, purifies it to meet drinking water standards, and then pumps it into recharge basins. Later, that water is extracted and treated again before it enters the drinking water system. Aside from boosting the local water supply, the system also protects the aquifer. Orange County injects treated water into the ground near the ocean to create a barrier that prevents seawater from contaminating the freshwater aquifer. 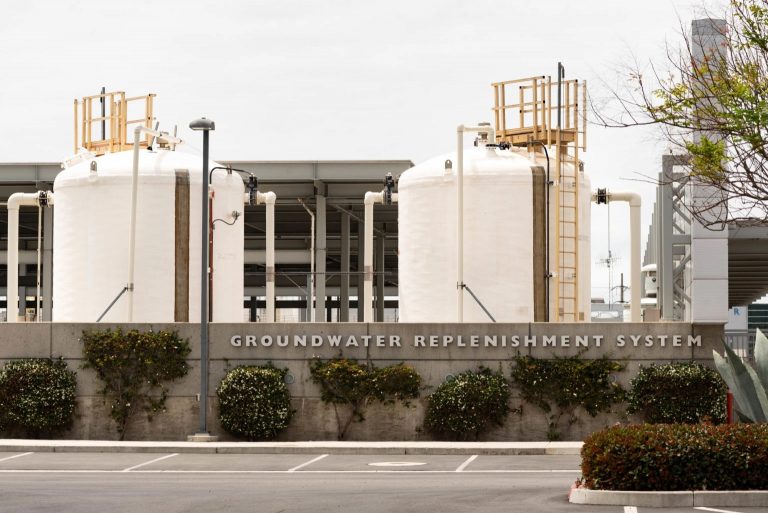 Treated wastewater can also be returned to the drinking water system. The technology exists, and while it may sound unsavory, it’s entirely safe. Utilities are now waiting on the state to come up with regulations for this type of water reuse.

Meanwhile, onsite recycling is expanding throughout the state. San Francisco now requires new buildings larger than 250,000 square feet to be built with onsite recycling systems that make rainwater and “greywater” (water from showers, dishwashers and washing machines) available for flushing toilets and irrigating fields. Eventually, these kinds of onsite systems could trickle down into smaller structures, and even homes, reshaping the water system the same way that solar panels have reshaped the energy system, Ajami said.

The main advantage of desalination, according to its proponents, is that it’s a stable, climate-resilient source of water.

“The Pacific Ocean is the largest reservoir in the world,” Maloni said. “It’s always full, and we’ve got the technology to turn that saltwater into drinking water.”

But it’s a technology that will make water less affordable for the communities that rely on it, Leon-Grossmann says. Californians already owe more than $1 billion in unpaid water bills, according to the State Water Resources Control Board, and the Orange County Water District estimates the Huntington Beach plant would raise the average resident’s monthly water bill — which is now about $50 — by $3 to $6.

But while gains in recycling, efficiency, and conservation should take pressure off of California’s aging water infrastructure, they won’t necessarily do much to shrink utility bills. That’s because, while residents pay for the amount of water they use, most water suppliers’ costs are fixed, so as Californians conserve water, utilities have to increase rates to pay for infrastructure maintenance and upgrades, treatment, staffing, and other costs.

“It’s difficult to ask a business model that’s not set for these conditions to do something that it’s not meant to do, which is to incentivize people to save water,” Ajami said. “Our problems have shifted, so our solutions have shifted too.”

Facing a worsening water crisis, it’s inevitable that some places will build desalination plants to cope with drought. But given the high costs, both financial and environmental, experts say that desalination should still be a last resort, reserved for areas that are cut off completely from the state water supply.

“Desal is coming, it’s just a matter of time,” Maloni said. “I think the question is how much desal is coming.”