This story by Juliana Ennes originally appeared in Mongabay and is republished here as part of Covering Climate Now, a global journalism collaboration strengthening coverage of the climate story.

One of the main fears about the Brazilian Amazon is beginning to materialize: Logging is starting to move from the periphery of the rainforest toward the core of the biome, groundbreaking new research shows.

Tracking cut trees through satellite mapping data, the research found that logging activities cleared 464,000 hectares (1.15 million acres) of the Brazilian Amazon — an area three times the size of the city of São Paulo — between August 2019 and July 2020. More than half (50.8 percent) of the logging was reportedly concentrated in the state of Mato Grosso, followed by Amazonas (15.3 percent) and Rondônia (15 percent).

“Around 20 years ago, we feared that the forest would be devastated in the so-called ‘deforestation arch’ and the movement would migrate from the peripheral areas toward the central region of the Amazon,” said Marco Lentini, senior project coordinator of Imaflora, a sustainable development NGO involved in the mapping project. “Our map shows this is happening now: Logging is going toward the Amazon core.”

He said the logging pattern was that of “frontier migration,” adding, “This is something that terrifies us. We have to stabilize this frontier.” 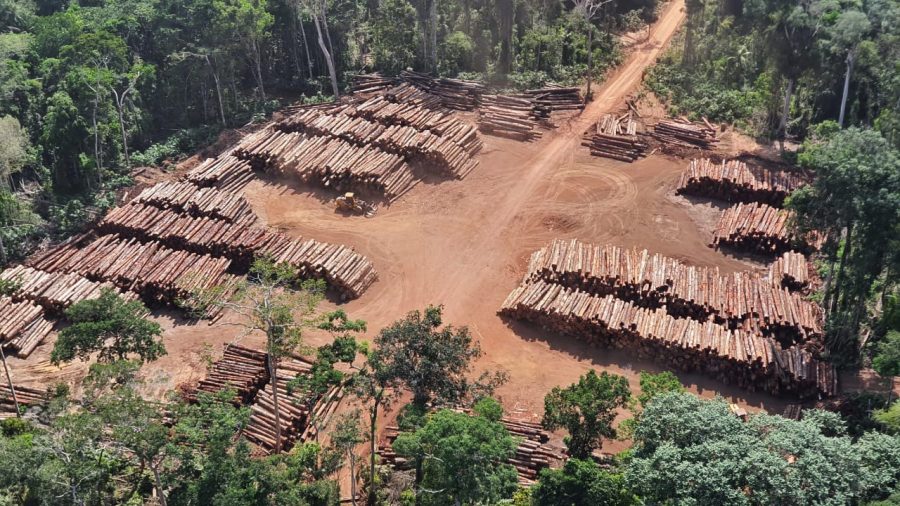 The largest seizure of illegal timber in Brazil’s history saw police recover 226,000 cubic meters (8 million cubic feet) of wood on the border between the states of Amazonas and Pará in March 2021. Photo credit: Federal Police in Amazonas state / Mongabay

The research, released last week, was developed by the Simex network formed by four Brazilian environmental nonprofits: Imazon, Imaflora, Idesam, and Instituto Centro de Vida (ICV). The institutions say they set up the alliance to map, for the first time, logging in almost all of the Amazon. They managed to map seven of the nine states that make up the Brazilian Amazon — Acre, Amazonas, Amapá, Mato Grosso, Pará, Rondônia, and Roraima — which together account for almost 100 percent of timber production from the rainforest.

Although the mapping was unable to specify the exact amount of trees illegally extracted from untouched forests, mostly of the illegalities were concentrated at the triple border between Mato Grosso, Amazonas, and Rondônia, where intense logging activity was detected in an Indigenous reserve and a conservation unit, according to Vinícius Silgueiro, territorial intelligence coordinator at ICV, a nonprofit based in Mato Grosso. “Protected areas in this region show a large presence of logging and low level of fiscalization, with a lot of signs of illegality.”

The Simex map covers areas where the Federal Police made the largest seizure of illegal timber in Brazil’s history earlier this year, recovering 226,000 cubic meters (8 million cubic feet) of wood on the border between Amazonas and Pará states. This operation triggered the ouster of the controversial minister of environment, Ricardo Salles, in June after he reportedly asked for the release of the wood.

Ten municipalities accounted for almost 200,000 hectares (494,000 acres) of logging, five of them in Mato Grosso, two in Amazonas, and the remaining in Roraima, Acre, and Pará. Most logging activity, 78 percent, reportedly occurred on privately owned properties. Legal permits are often used to mask logging in restricted areas through a process known as tree laundering, according to the findings.

A more detailed study developed by Imazon focused on Pará shows that over half of the logging in the state has not received any governmental authorization. From August 2019 to July 2020, 50,139 hectares (123,896 acres) of forest were reportedly devastated, with 55 percent without authorization from environmental bodies. This represented a 20 percent growth over the 12 months before, when non-authorized logging totaled 38 percent, according to Imazon. 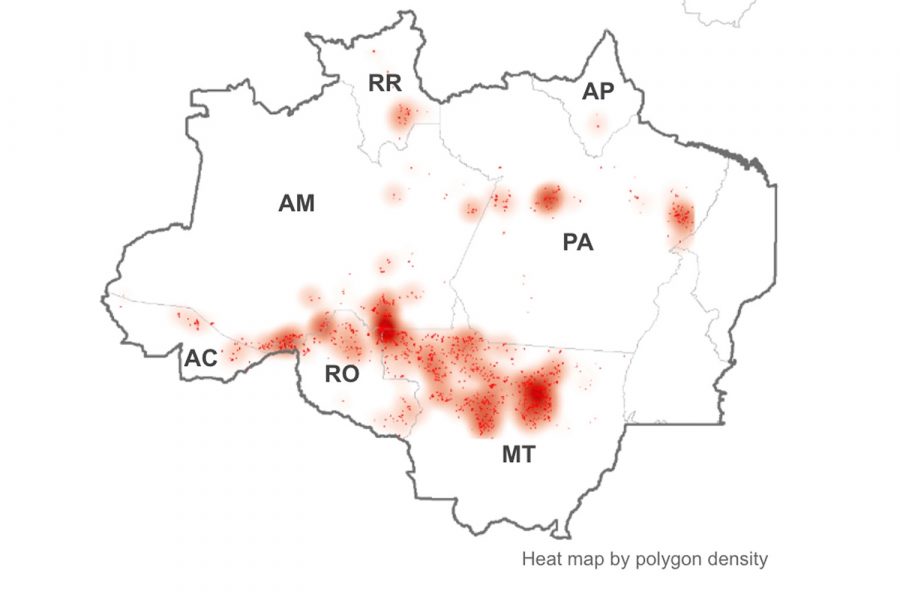 The map developed by the Simex network shows concentrations of logging activity in the state of Mato Grosso, followed by Amazonas and Pará. Image courtesy of Simex. Before the advent of the Simex project, only Pará and Mato Grosso had satellite-based maps identifying areas where logging has occurred. Imazon started monitoring Pará in 2008, and ICV joined the initiative in 2013 by monitoring Mato Grosso. The institutions say that these states were their initial focus for data transparency due to high logging activities.

Logging for timber doesn’t clear forest area as extensively as deforestation does, and vegetation growth over logging sites can make visualization via satellite harder, according to Vinícius Silgueiro, territorial intelligence coordinator at ICV.

“With logging, different than deforestation, there is still some coverage by vegetation. We can identify scars in the forest made by the roads used to move the logs, as well as clear areas for storage. There is a whole infrastructure around logging that helps us find these areas,” Silgueiro told Mongabay in a phone interview.

In most states, however, he said it’s nearly impossible to verify when the logging activity is illegal, due to lack of transparency or technological barriers. Many times, he added, certificates for legal forestry activities are filed on paper, making it hard to cross-reference the database of certificates with the images. The only two states with digitized databases are Pará and Mato Grosso. 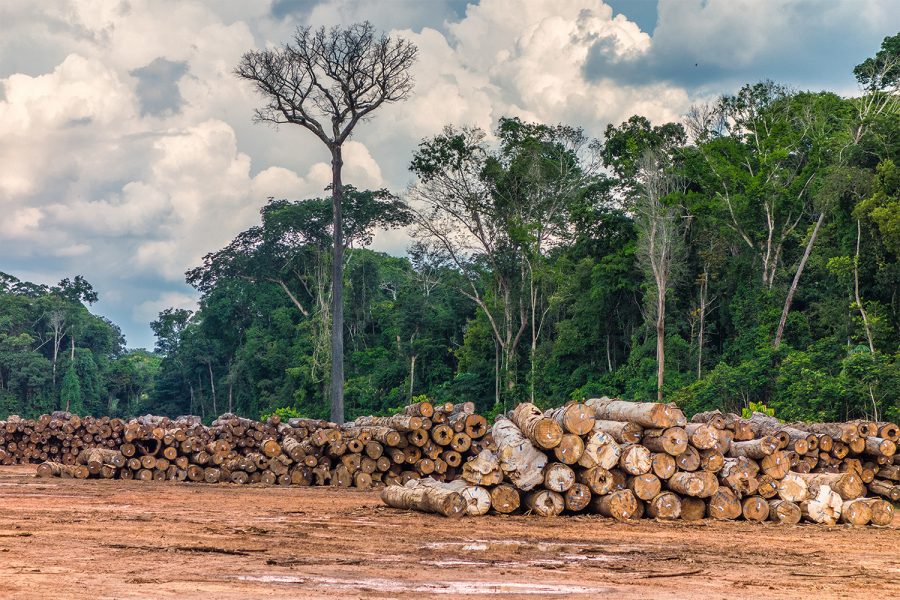 Another challenge is that the certificates allowing forest management give the location coordinates, but not the shapefile — the digital map — of the area, which hampers efforts to identify through satellite imagery where illegal logging occurs, according to Lentini.

Despite these challenges, there are cases where it is very clear that the logging taking place is illegal, Lentini said: when it happens in protected areas like Indigenous reserves and conservation units. The study found that 6 percent of logging in the Amazon, or 28,112 hectares (69,466 acres), was in conservation units during the study period; 5 percent was in Indigenous reserves, at 24,866 hectares (61,445 acres). “These areas don’t have any kind of authorization for legal logging,” Silgueiro said.

A 2018 report by Greenpeace, titled “Imaginary Trees, Real Destruction,” highlighted the unreliability of Brazil’s forestry licensing and control systems, which it said makes it harder to tackle fraud.

“This allows the forest engineers … to overestimate volumes or fraudulently add trees of high commercial value to the area’s forest inventory. State agencies subsequently issue credits for the harvesting and movement of this non-existent timber,” which will be logged from forests on Indigenous lands, protected areas, or public lands, according to Greenpeace’s investigation. 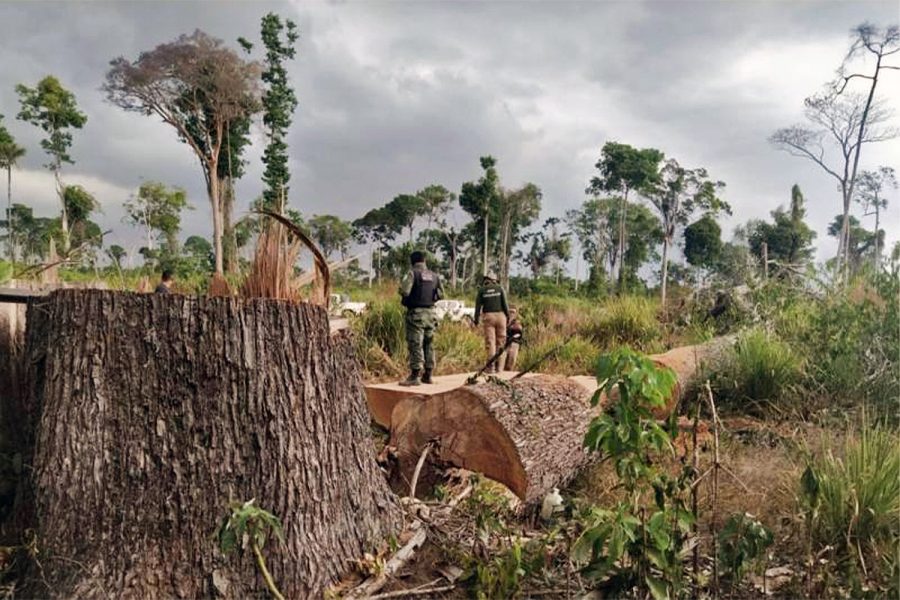 Silgueiro said legal and illegal logging persist in proportions of around 60:40. “The more legal documentation there is for exploring the forest, the more illegal timber there is,” he said. He added that logging fraud will only stop once the whole process becomes traceable through technologies that help estimate the real volume of timber production and track each tree individually. “Traceability of production is essential,” Silgueiro said. “This technology already exists, but producing states are slow at adopting it.”

The environmental impact of illegal logging is immense. Recent studies show the Brazilian Amazon is now a net carbon dioxide source, instead of being a carbon dioxide sink as would be expected, due to factors that include logging.