This story by Naomi Buck originally appeared in Corporate Knights and is republished here as part of Covering Climate Now, a global journalism collaboration strengthening coverage of the climate story.

Seen from above, the region of Lusatia in eastern Germany looks as though some extraplanetary Goliath has taken a rake, hammer, and chisel to the surface of the earth. More than a century of strip mining has rendered the landscape one of the most barren and deformed on the planet. And now, in the comparative blink of an eye, the mining of brown coal — and the power generation coupled with it — is coming to an end.

East Germany’s coal industry has been in decline since German reunification, but the recently elected federal government —– a coalition of green, liberal, and social democratic parties — has driven the last nail in its coffin with its commitment to phase out all coal power by 2030.

Questions that have hovered over Lusatia for decades take on new urgency: What will replace coal as the region’s economic foundation, and who will be on the losing end of that transition?

Lusatia is far from alone; fossil-fuel-producing regions around the world face similar challenges. Meeting them head-on will be key to the success of the massive global shift that lies ahead, and Lusatia’s resurrection as a center of electric mobility offers both inspiration and important lessons.

Lusatia lies southeast of Berlin, on the Polish border, and is home to vast seams of the compressed peat that forms lignite — or brown coal. At one time, it was the pumping heart of East Germany, the foundation of the communist state’s energy autonomy. The sulfuric smell of burning coal suffused East German towns and cities as their inhabitants wiped its film off their windows and shook its dust from their laundry. Not only an energy and heat source, lignite fueled the East German rail system, served as a petroleum substitute in the chemical industry, as well as coking coal in metallurgy. East Germany ran on brown coal, making the roughly 100,000 people who worked in Lusatia’s strip mines, briquette factories, and power plants heroes of the workers’ state.

Fred Mahro was one of them. Lusatian by birth, he was 30 when Germany united — or, as he puts it, when West Germany took over — and was working as an electrical engineer in the local power plant in Jänschwalde. He spent the next decade watching the local economy collapse as hundreds of thousands of his fellow East Germans headed west. Three-quarters of the Lusatian brown-coal workforce were left jobless, but Mahro was not among them. Describing himself as “rooted in the soil,” he stayed put, got involved in union work, and entered the public service. 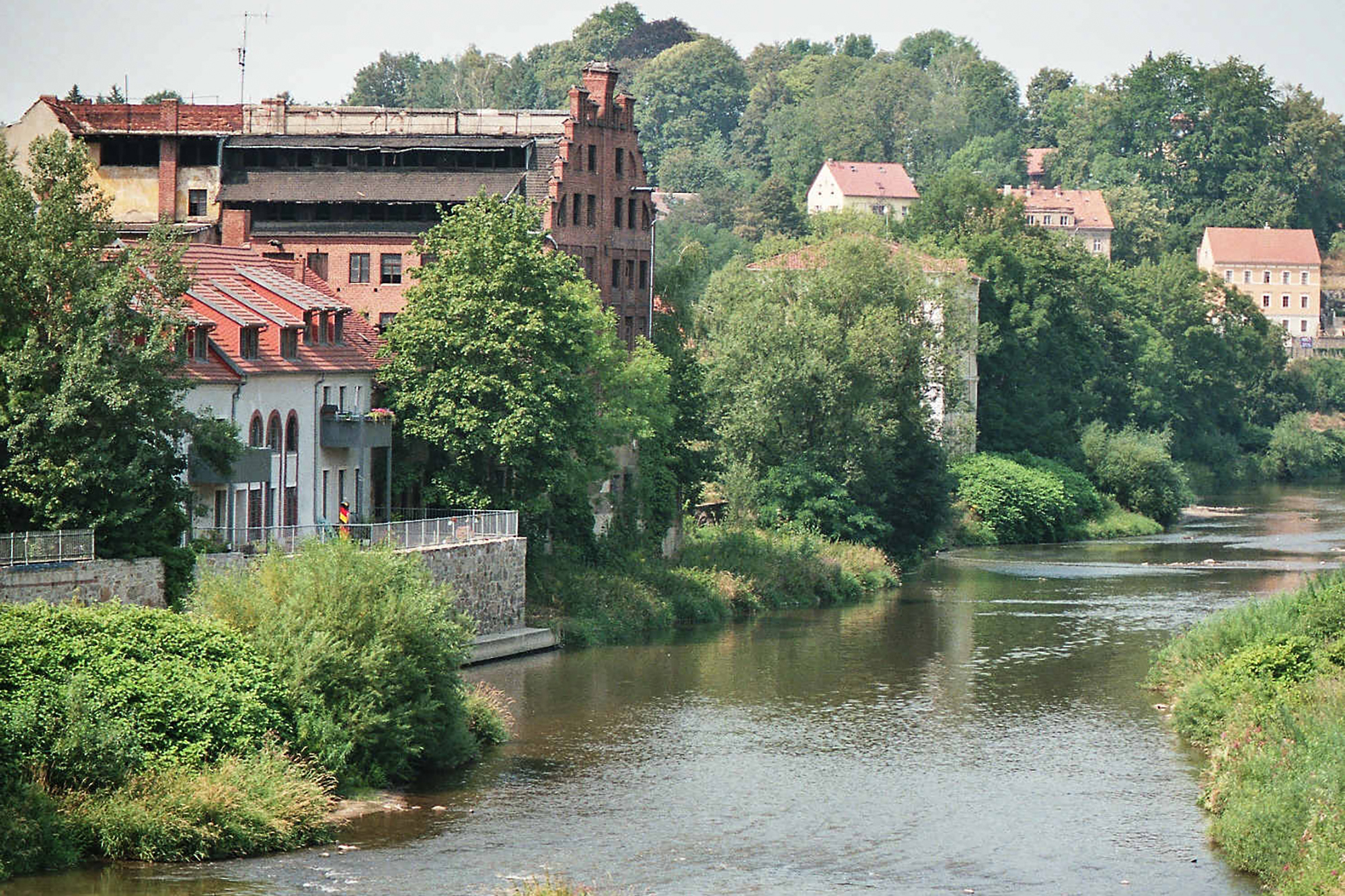 The Lusatian Neisse on the border between Görlitz, Germany, on the left and Zgorzelec, Poland, 2007. Photo credit: Elmar J. Lordemann / Wikimedia (CC BY 3.0)

Today, Mahro is the mayor of Guben, a Lusatian town perched on the Neisse River that forms the German border with Poland. Guben’s population of 17,000 is half what it was at the time of reunification. Its main employer — a chemical fiber company — is now Thai-owned and 6,000 jobs lighter. The challenges just keep coming. Last year, a fence was erected to limit the spread of African swine fever and avian flu from Polish livestock, while refugees from Africa and the Middle East continue to attempt crossings of the frigid Neisse into Germany. And then there’s the pandemic.

In the most recent federal election, candidates of the far-right populist Alternative for Germany received the most votes of any party in Guben. The party rails against immigration, Europe, and the green transition. But Mahro doesn’t consider it a serious political threat. “They feed the fear, but they don’t offer solutions,” he says.

In fact, Mahro is decidedly optimistic. Unemployment levels in Lusatia, which peaked in the mid-2000s at 25 percent, now hover around 7 percent. Good things are happening in Guben, the best of them last October, when Rock Tech Lithium, a Canadian-German lithium development company headquartered in Vancouver, announced that it would be building Europe’s first lithium hydroxide converter in Guben.

The cleantech company’s €470 million (~ $528 million) investment in the Lusatian town reflects a carefully crafted political strategy that is paying off.

“This is the last cornerstone,” says a jovial Jörg Steinbach, minister of economic affairs, labor, and energy for Brandenburg, one of two federal states that Lusatia traverses. Steinbach, who was the president of a major university in Brandenburg before being named minister in 2018, has overseen the most recent chapter of the region’s structural transformation and feels that things are coming together beautifully.

Since reunification, massive public investments have been made to renaturalize the Lusatian landscape and stimulate tourism. A chain of abandoned pits has been flooded to create the Lusatian Lake District, the largest collection of artificial lakes in Europe, complete with hotels, recreational boating outfits, and holiday rentals. But it was clear that Lusatia could not live from tourism alone. Steinbach knew that the region’s success rested on finding a replacement for coal that feels as essential to the present and future as coal did in the past.

The first cornerstone of that new industrial identity was laid in November 2019 with Tesla’s decision to build a $6.8 billion “Gigafactory” — the company’s fourth worldwide — in Grüenheide, a small municipality southeast of Berlin. It is slated to manufacture 500,000 cars annually and employ 12,000 locals. The announcement, which followed nine months of intense negotiations, was a major coup.

“This put Brandenburg on the map,” Steinbach says. And it gave new definition to the region. Tesla’s vote of confidence had a domino effect. In the last two years, BASF — the world’s largest chemical producer — and US battery producer Microvast have both opened plants in Brandenburg, producing cathodes and vehicle battery systems, respectively, and enabling Lusatia to brand itself as a center of electric mobility.

Certainly, this is what Rock Tech Lithium CEO Dirk Harbecke saw in Lusatia. A serial entrepreneur who previously worked in financial services in Africa, Harbecke anticipates a huge increase in the European demand for lithium hydroxide — an essential component of battery cathodes — as the continent’s electric car market takes off. He sees the electric vehicle boom shifting from China to Europe, destined to hit North America in two or three years.

Starting in 2023, Rock Tech will be extracting lithium from the granite outcrops of a property on Georgia Lake, 160 kilometres (100 miles) northeast of Thunder Bay, Ontario, and shipping it in concentrated form to Guben for processing. Ultimately, Rock Tech aims to harvest at least half of its lithium from recycled batteries, creating a closed production cycle. Harbecke also intends to expand Rock Tech’s empire of converters, with the next facility planned for the Thunder Bay area, providing access to American auto manufacturers via the Great Lakes.

In scouting locations for Rock Tech’s European converter, Harbecke, who grew up in West Germany, was interested to discover that the “other” Germany had more to offer. For one, it boasted more vacant industrial space, ready for development and well connected to road and rail. For another, Harbecke felt significant political support for his project in the former East. “They made it clear that they really wanted to have us there,” he says.

“This is the last cornerstone.” — Jörg Steinbach, minister of economic affairs, labor and energy for Brandenburg

This was exactly the plan. Minister Steinbach has made promoting Brandenburg’s “open for business” message — and polishing up his English — his top priorities. He feels there’s a misconception that subsidies alone will draw foreign investors, while in fact it is other factors that clinch the deal: personal commitment, for example, and the building of trust.

Another attractive feature of Brandenburg to investors is the composition of its energy supply. At two-thirds renewable (wind, solar, and biomass), Brandenburg’s is the greenest grid in Germany — pretty remarkable for a state that, as recently as 2017, was still running mainly on coal. This makes it a natural home for electric mobility — but also any other industry — in a world where carbon emissions hurt the bottom line.

The focus on renewables serves Germany’s climate goals, but also a sense of identity in places like Lusatia. There’s a cliché of East Germans as nay-saying, glass-half-empty defeatists. But given their recent history — from the expiry of the state many grew up in, to the adoption of an entirely new economic system, to a climate transition that has killed their prime resource — it’s no wonder that spirits have flagged.

Fred Mahro sees that changing. With pride, he can say that his region is now home to the entire supply chain of electric vehicles. More than a dozen EV charging stations are scattered across Guben, and Mahro is spotting more and more electric vehicles on its streets. His next car will be one of them.

In the last three years, the demographic tide has turned: More people have moved into Guben than away.

“We spent 30 years looking for investors,” he says. “And now they’re coming.”