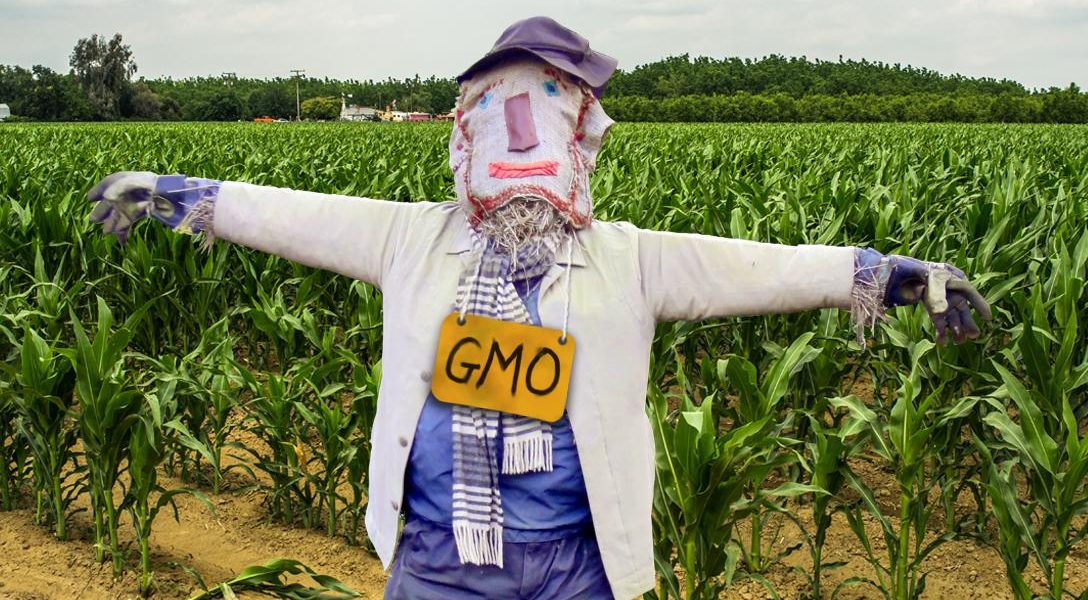 With a debate raging over whether genetically modified organisms (GMOs) are safe, it seems reasonable that people would look toward the media, academia and scientists for answers. But major biotech companies like Monsanto, Bayer and Dow know this, too, and seem to be engaged in an effort to rig the results.

GMOs are produced by recombinant DNA technology. How it works sounds like science fiction, or something out of a horror movie. Imagine: Genes from an insecticide are inserted into the genome of the corn plant, thus producing a crop that resists insects. The insecticide is made from the protein of a bacteria closely related to anthrax, and it works by making the guts of the insect explode.

Critics, such as the Center for Food Safety, say that GMOs are insufficiently tested and may be dangerous. There are high-profile campaigns in three Western states to label GMOs as such, so that consumers can know what they are buying and eating. At the same time, food businesses have been scrambling to ban, or remove, the warning labels.

Are GMOs dangerous? For answers to such questions, we normally turn to reputable scientists associated with reputable universities. Surely we can trust them to give us objective information. Or can we? It turns out that biotech heavyweights like Monsanto, Bayer et al have been paying reputable people from reputable institutions to swing the debate in their favor.

A treasure trove of emails — obtained through Freedom of Information Act (FOIA) requests by a US non-profit and acquired by The New York Times — reveals that academia is infested with professors who are paid to vigorously promote GMOs on behalf of the biotech industry, which also includes trade associations such as CropLife America.

And some academics have even sabotaged the efforts of others to publish facts that contradict the claims of these professorial shills for GMOs.

But to learn how deep the problem goes, you would need to find the links to those emails, and dig through layer upon layer of them.

Of course, if you don’t have time for that, you always can rely on The New York Times to give you the low-down on Big Food’s propaganda efforts. Or can you? The Times — whose motto is “All The News That’s Fit to Print” — has published a curiously tame and seriously incomplete version of what is buried in those emails.

On September 6, The New York Times website ran “Food Industry Enlisted Academics in GMO Lobbying War, Emails Show”, by Eric Lipton. The print edition featured a further watered-down headline: “Emails Reveal Academic Ties in a Food War.”  The emails themselves are presented only in the electronic version of the paper in a sidebar.”

At first sight, the Lipton article is impressive. He exposes a number of individuals from various institutions, but focuses mainly on Kevin Folta — Chair of the Department of Horticulture at the University of Florida.

Folta secretly took expenses, and $25,000 of unrestricted money, from Monsanto to promote GMO crops. And Lipton reports a damning quote showing Folta’s close relationship with Monsanto, something he had previously denied:

“I am grateful for this opportunity and promise a solid return on the investment,” Folta wrote after receiving the $25,000 check.

Lipton also mentions Folta’s participation, with other academics, in a website run by the biotech industry, GMO Answers. A PR firm hired by the industry provided questions from the public, such as, “Do GMOs cause cancer?”

But, as Lipton reports, Ketchum, the PR firm, did more than provide the questions — it also provided answers which Folta used nearly verbatim.

In the scientific community, none of this was exactly news. The basic facts had already been revealed in a leading scientific journal, Nature, by Keith Kloor, who also had access to the emails.

It is odd that this was first reported by Kloor, a pro-biotech journalist who works for a pro-biotech publisher. Or perhaps not so odd, given that Kloor went on to state that the emails “do not suggest scientific misconduct or wrongdoing by Folta” — even after Folta was on record as denying he had received any biotech funding.

Not disclosing such funding is definitely considered scientific misconduct. So why did Kloor rush to exonerate him?

Was Kloor’s story a pre-emptive strike to defuse the issue of wider biotech corruption of academia? Was Lipton’s?

The damning emails originally came to light earlier this year, when a newly-formed activist group called US Right to Know (USRTK) set in motion Freedom of Information Act (FOIA) requests directed at 14 (now 43) prominent public-university scientists. These academics were suspected of working with (and being paid by) the biotech industry and/or its PR intermediaries. (The emails released via FOIA — reputedly totalling in the tens of thousands — are the source of Kloor’s and Lipton’s highly selective reporting.)

One might think that if these 43 scientists had nothing to hide, such a request would have generated little attention outside academia.

In fact, the FOIA requests from USRTK triggered a huge outcry in various quarters about the “harassment” of public scientists. This led to op-eds in the LA Times, the controversial removal of scientific blog posts defending USRTK, and much else besides.

What would a good PR company recommend to its clients in such a situation? Preempt the upcoming firestorm: Have various media outlets run ahead of USRTK to publish a version in which small-fry like Kevin Folta are the villains. This lets other, more prominent players, off the hook.

So, if that was the strategy of the food industry and its allies, what exactly were they trying to hide?

Not “Fit to Print”

Here are just a few examples of what you would never guess — from reading The New York Times — is going on.

Heavily involved in this project are senior members of the university’s administration, such as Ronnie Coffman, Director of Cornell’s College of Agriculture and Life Science, and Sarah Evanega Davidson, now director of the Cornell Alliance for Science, who were funded (to the tune of $5.6 million) by the Gates Foundation.

The Alliance is a PR project and international training center created for the promotion of GMOs with various events, such as their “Ask Me Anything” panels held at universities around the country. This was an idea originally pitched by Kevin Folta to Monsanto over a year earlier. Among the speakers invited by the Alliance to Cornell in September were Tamar Haspel (The Washington Post) and Amy Harmon (The New York Times).

• A Dirty Trick to Destroy an Opponent

A group of pro-GMO scientists colluded with the editor of a prestigious journal in hatching a plot to destroy the credibility of Russian scientist and GMO critic, Irina Ermakova. Her discoveries on the harmful effects of feeding GM soy to rats had caused a great deal of concern to the biotech industry.

First, Andrew Marshall, the editor of the journal, Nature Biotechnology, invited her to answer a set of questions about her work, giving her the impression this would be ”her” article. She was even sent a dummy proof with her name on it. But what he actually published was something else: Her comments, followed by a critique by scientists with no expertise in her specialized field, who tore apart her work using self-serving logic.

They replaced most of her references with those chosen to bolster their own case — falsely creating the impression she had no data to support her claims and no agreement among other specialists. Ermakova was neither told of the critique nor offered a chance to answer it, which would have been standard.

The scientists involved: Bruce Chassy, Professor Emeritus, University of Illinois. (As reported by

Professor C.S. Prakash (Tuskegee University) is the convener of the influential listserv AgBioWorld — the all-important conduit for a petition signed by 3000 scientists calling for the retraction of a 2001 scientific paper showing GMO contamination of Mexican corn (Quist and Chapela 2001).

As detailed in an article called The Fake Persuaders, the scientists who initiated the petition, and made inaccurate and inflammatory statements about the authors, were not real people. However, their emails could be traced back to servers belonging to Monsanto or Bivings, a PR company that was working with Monsanto at the time.

• Monsanto Manipulates American Association for the Advancement of Science

Nina Fedoroff (Pennsylvania State University) is the most prominent of the scientists referenced in The New York Times story. She was the 2011–2012 President of the American Association for the Advancement of Science. During her presidency, Fedoroff, who is also a contributor to the Times, used her position to coordinate and sign a letter on behalf of 60 prominent scientists. This letter — which was based on disinformation about the risks of biotechnology — was sent to the EPA as part of an effort to defeat the expansion of their regulatory powers over the biotech industry.

The real coordinator was Monsanto, but Fedoroff participated in phone conferences and email exchanges with them — and the prominent lobbyist Stanley Abramson — and she gets credit in the emails for “moving the ball far down the field.”

• Money from the Biotech Industry to University of Florida

Folta rarely acted alone. Emails reveal that his networks are filled with economists, molecular biologists, plant pathologists, development specialists, and agronomists. Their role was to repel legislative, media, and scientific threats to the GMO and pesticide industries — all the while keeping their industry links hidden.

As one of them wrote, “We are all bad-ass shills for the truth. It’s a pleasure shilling with you.” Or, as Folta himself put it: “I’m glad to sign on to whatever you like, or write whatever you like.”

In view of all of the above, it does not seem unreasonable to want GMO foods to be labeled as such. And perhaps the academics who speak for them should also be labeled.