This story by Justin Catanoso originally appeared in Mongabay and is republished here as part of Covering Climate Now, a global journalism collaboration strengthening coverage of the climate story.

Two new studies released this week — both aimed at influencing the US, UK, and EU policymakers in the runup to the November COP26 Scotland climate summit — conclude that the harvesting of trees to produce wood pellets in the United States and to burn them for energy overseas is undermining the promised carbon emissions reduction targets urgently needed to slow the rate of global warming and prevent worsening climate change.

Amid myriad research over the past decade warning of the harm burning wood pellets is doing to forests and the atmosphere, the new studies are unique in that they take a transatlantic view of the issue.

Both not only evaluate the smokestack emissions from burning wood pellets but also add up carbon emissions generated in the Southeast US and in oceanic shipping. The summation includes emissions produced during the harvesting of live trees, emissions released by pellet manufacturing plants located in Virginia south to Texas, as well as emissions from shipping pellets overseas. Counted too was the lost carbon-sequestration capacity of logged forests. 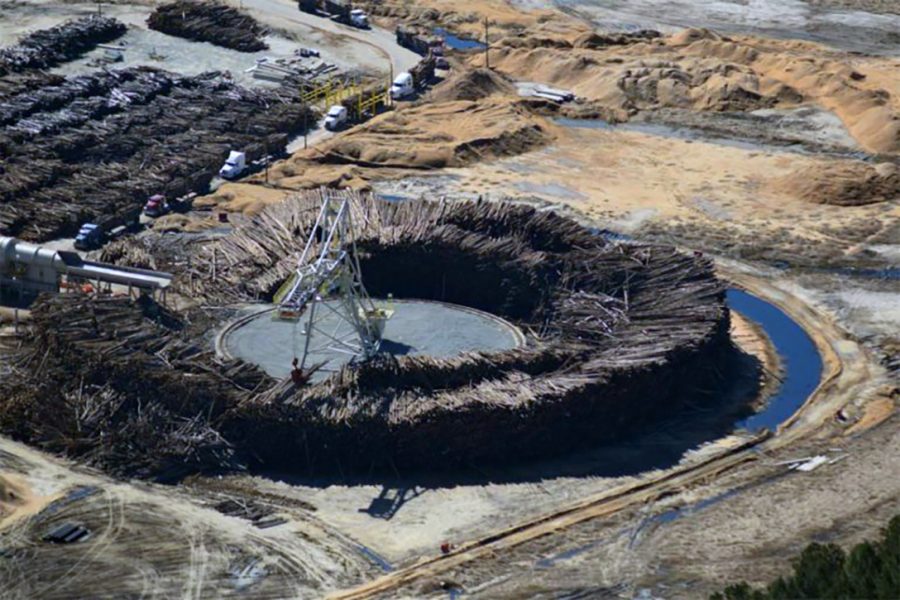 Stacked ring of thousands of whole trees at Enviva’s Sampson County, North Carolina forest biomass facility. Most wood pellets made in the US are shipped to Europe where they are burned to produce energy. Photo credit: Dogwood Alliance / Mongabay

The studies, one produced by London policy institute Chatham House in tandem with the Woodwell Climate Research Center in the US and the other created by the Natural Resources Defense Council (NRDC), make clear that national policy decisions in the US, UK, and EU have resulted in biomass emissions not being recorded and counted all along the supply chain and at smokestacks in any of the parties’ annual greenhouse gas emission inventories reported under the Paris Agreement.

The result is an appearance that forest biomass production and burning is carbon neutral, which allows for an erroneous accounting by the US, UK, and EU that will help them to hit their Net Zero emissions goals.

The Chatham/Woodwell authors note that “the mislabeling of woody biomass as a zero-carbon energy source threatens to push government climate change targets further off track.” Their study estimated that wood pellets produced in the US and burned in the UK led to 13-16 million tons of carbon dioxide emissions in 2019 alone — equal to the emissions of up to seven million cars.

In a first-of-its-kind evaluation, the study estimated that 0.8 to 3.6 million tons of carbon dioxide were emitted in the Southeast US in 2019 alone from harvesting, producing, and shipping wood pellets — all uncounted by the US.

“It’s not an enormous number,” co-author Richard Birdsey of Woodwell, who compiled the US estimates, told Mongabay. “But if you look back at what’s been done already, and consider the growth of the [wood pellet] industry, that amount could be 10 to 50 times higher in the years ahead. Then you have a big impact” with global climate repercussions.

Chatham/Woodwell concluded that if the UK counted the actual transatlantic emissions from producing and burning wood pellets in 2019, “This would have added 22 percent to 27 percent to the emissions from total UK electricity generation, or 2.8 percent to 3.6 percent of total UK greenhouse gas emissions.”

With the two-week United Nations COP26 summit starting in Glasgow, Scotland, on October 31, both studies call into question the validity of the 2030 carbon reduction pledges made by three of the world’s largest carbon polluters — the US (with a 50 percent reduction pledge), UK (58 percent), and EU (55 percent). While these Paris Agreement signatories may meet those goals on paper, nature will know that no such atmospheric emissions cuts have been achieved as wood pellets are burned.

One of the highest COP26 priorities is the boosting of achievable and verifiable carbon-reduction ambitions among the world’s largest economies in order to hold global temperature rise to 1.5 degrees Celsius (2.7 degrees Fahrenheit) over a 1900 baseline to avoid climate catastrophe in just decades. But a big gap still exists between national pledges (known as NDCs) and the Paris target; burning wood pellets only complicates evaluating that progress, the reports conclude. 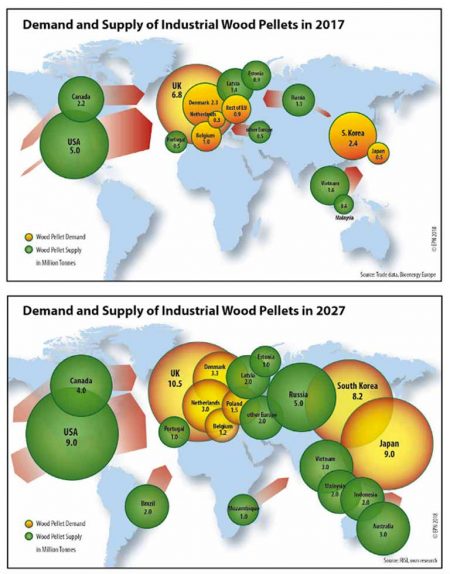 “This [Chatham/Woodwell] study, and others like it, are drawing more and more politicians’ awareness to the serious climate impacts of biomass electricity,” said Lord John Randall, a member of the British House of Lords and an environmental adviser to former British Prime Minister Theresa May. “These studies make clear that current energy policy doesn’t match the overwhelming science on the impacts of biomass.”

Forestry and energy sector pro-biomass advocates debate that view, maintaining biomass burning is “based on sound and relevant science” and they point to studies backing their view.

In his statement to Mongabay, Randall predicted: “It is only a matter of time before the UK government begins to re-examine [biomass] as part of its energy mix. Other countries, at COP26, will see the UK realizing that pursuing biomass electricity has been a mistake for the climate, people, and nature. They should not follow the UK down the path of dirty biomass electricity.”

Whether that happens, and how quickly, remains an open question. The UK is home to the world’s largest consumer of wood pellets, Yorkshire-based Drax. The converted coal-burning plant gets most of its pellet supply from makers in the Southeast US. The UK is committed through 2027 to paying Drax more than $1 billion annually to subsidize its wood pellet-burning operation. Drax is lobbying to extend those subsidies. 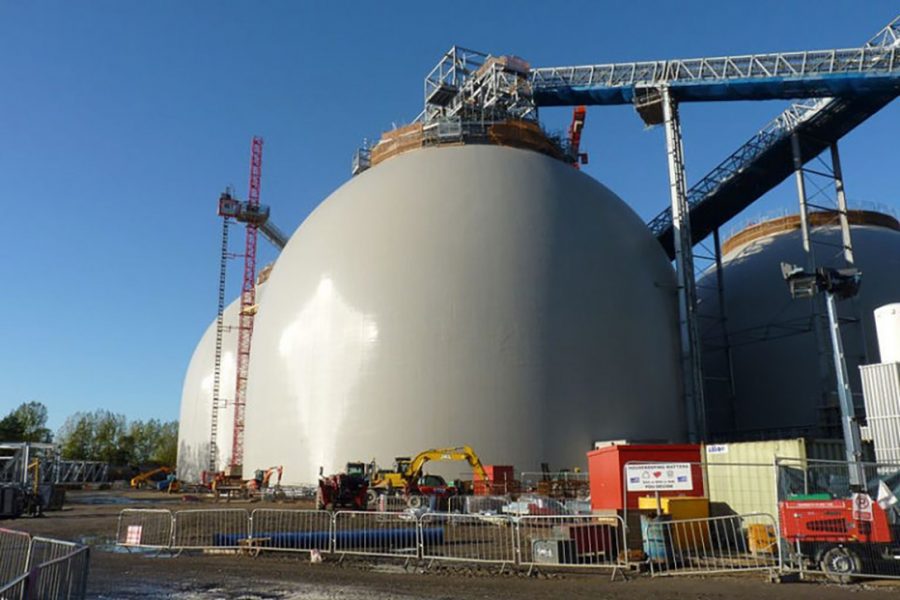 The UK’s Drax power station, which imports wood pellets from the US Southeast and Western Canada to burn to make electricity. Unlike the burning of coal, wood burning is counted as carbon neutral, helping the UK, EU, and US meet their emissions reduction targets. Photo credit: DECCgovuk / VisualHunt / Mongabay

But only minor changes were made in the directive, with EU leaders acknowledging that they cannot meet their aggressive carbon-reduction targets under the Paris Agreement without burning biomass — even as tons of emissions go legally uncounted at the smokestack annually.

For its part, the pellet-making industry, and companies like Drax, argue that they are helping nations dramatically reduce their coal consumption, which is true, with a fuel source that is legally recognized as carbon neutral, on par with zero-carbon wind and solar, which is also true.

The US Industrial Pellet Association (USIPA) and UK Association for Renewable Energy and Clean Technology (REA) came out as deeply critical of the new Chatham House report. In a statement the USIPA said, “The conclusions of [Chatham House’s] latest report are deeply flawed, and are based on a total rejection of carbon accounting and reporting guidelines as determined by the [UN IPCC, the] world’s leading authority on climate science. A peer-reviewed paper published this year by 28 leading academics also found that the UN IPCC reporting approach is ‘accurate, has no gaps and does not assume that bioenergy is carbon neutral although it has sometimes been described as such.’”

Carbon accounting legalities aside, both new studies, and many before them, have found that burning wood pellets produces more carbon dioxide emissions than burning coal per unit of energy, and that newly planted trees take decades, if not centuries, to offset the daily emissions from burning tons of wood pellets for energy and heat, thus negating the real-time carbon neutrality claim. 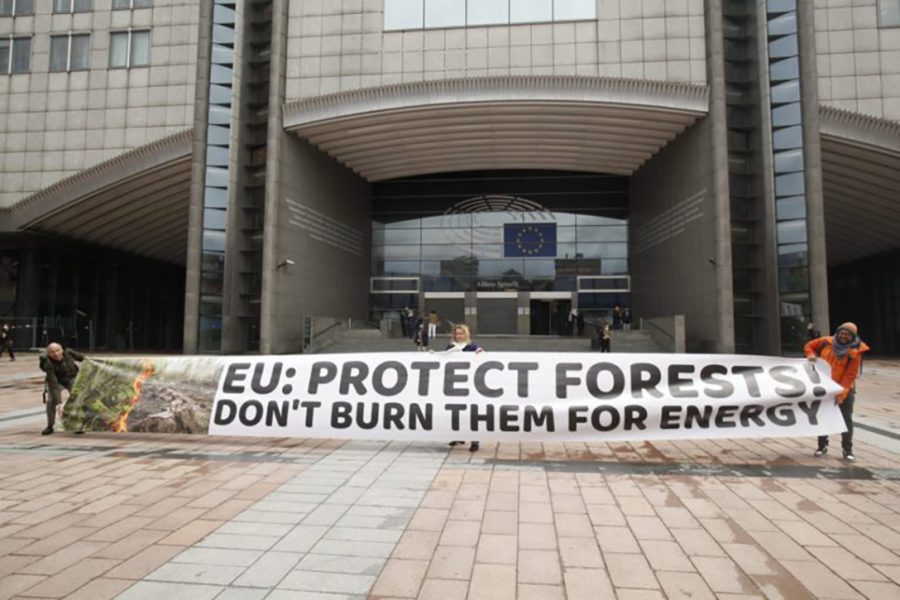 Forest advocates from the Netherlands stage a protest against the use of biomass for energy outside the European Union Parliament in Brussels, where delegates debated revisions to the EU’s Renewable Energy Directive. Photo credit: Maarten Visschers / Mongabay

Us Congress Yet to Weigh in on Carbon Neutrality

The NRDC study, with a similar research focus and findings to the Chatham/Woodwell study, aimed its report at the US Congress, which is considering a Senate Appropriations bill element meant to classify forest biomass as carbon neutral. That’s a step the Environmental Protection Agency under President Biden has thus far been reluctant to take.

Nathanael Greene, an NRDC renewable energy advocate, urged Congress to avoid such a legal classification: “Policymakers must stop wasting their time betting on … industries that provide no promise of a better, cleaner planet. They should rely on science and focus on real climate solutions like solar and wind, which can benefit the economy, environment and public health.”

Duncan Brack of Chatham House, a co-author of the Chatham/Woodwell study, told Mongabay that UK and EU policymakers could, if they desired, decide today to tighten their regulations and end subsidies in order to reduce their forest biomass consumption. But changing international carbon-accounting regulations could take more time.

Birdsey, a forestry expert at Woodwell, said environmentalists will need to be patient in awaiting policy changes.

“The [bioenergy] industry is a powerful and entrenched lobby, and a lot of countries are depending on carbon neutrality to meet their [emission reduction] targets. They are not interested in seeing any changes made,” he said. “I don’t think any single report is going to matter that much. But as they accumulate, I do think some minds are changing.”

Wayne Walker, another co-author with Woodwell, added: “Time will tell. Evidence to discontinue subsidies for biomass is mounting and with it pressure on policymakers to act in the best interest of the climate.”