Staff and volunteers with the Anacostia Watershed Society release 1,300 freshwater mussels into the Anacostia River in Washington, DC, on September 30, 2019. Photo credit: Used with permission from Will Parson / Chesapeake Bay Program / The Revelator
Environment

These aquatic heroes do so much to keep freshwater ecosystems healthy — and we’re killing them off at a record pace.

In September the US Fish and Wildlife Service proposed removing 23 species from the federal list of endangered species — not because they’d rebounded, sadly, but because they are believed to be extinct.

News reports about the announcement highlighted some of the more well-known names among the group, including birds like ivory-billed woodpeckers and Bachman’s warblers.

The loss of these creatively named mussels is symptomatic of a much bigger problem.

North America has the greatest diversity of freshwater mussels in the world, with some 300 species, but they’re also among the planet’s most imperiled animal groups. More than 35 of the continent’s mussel species have already been lost, and 65 percent of those remaining are vulnerable to extinction.

Invasive species, pollution, and land-use changes — such as dam building — have taken a heavy toll.

That’s bad news because these unassuming mollusks, who often spend much of their lives partially buried in sediment, play a major role in keeping our rivers and streams healthy. When mussel populations decline, it’s an indication that our freshwater ecosystems are also in trouble.

Better protecting mussels will help protect rivers and streams. But first, it’s important for activists and policymakers to understand their value. Here are some of the important roles they play:

Mussels are like tiny water-treatment plants. They have an inhalant aperture, also called a siphon, that allows them to filter bacteria, pathogens, and algae out of the water column. Mussels eat many of these particles as part of their diet, but some mussels have also been shown to remove pharmaceuticals, personal care products, herbicides, and flame retardants. That can help clean our waterways, but it doesn’t mean it’s good for mussels. Pollutants can bioaccumulate in their tissues, harming functions like reproduction.

Filtration rates vary by species and conditions, but research has found that a single adult mussel can clean more than 10 gallons of water a day. And when they reduce the level of algae in the water and make it clearer, more light reaches plants below the surface, which in turn helps provide food for invertebrates, fishes, ducks, and other aquatic organisms.

“There’s a lot of interest in restoring mussels so that it costs less money to treat water,” says Caryn Vaughn, a biology professor at the University of Oklahoma and an expert on freshwater mussels.

One of the places at the forefront of this new field of research is the Partnership for the Delaware Estuary, which runs the Mussels for Clean Water Initiative. The program propagates and outplants mussels in order to help support ecosystem health and clean water. The Partnership released its first 30,000 captive-raised mussels in 2018. 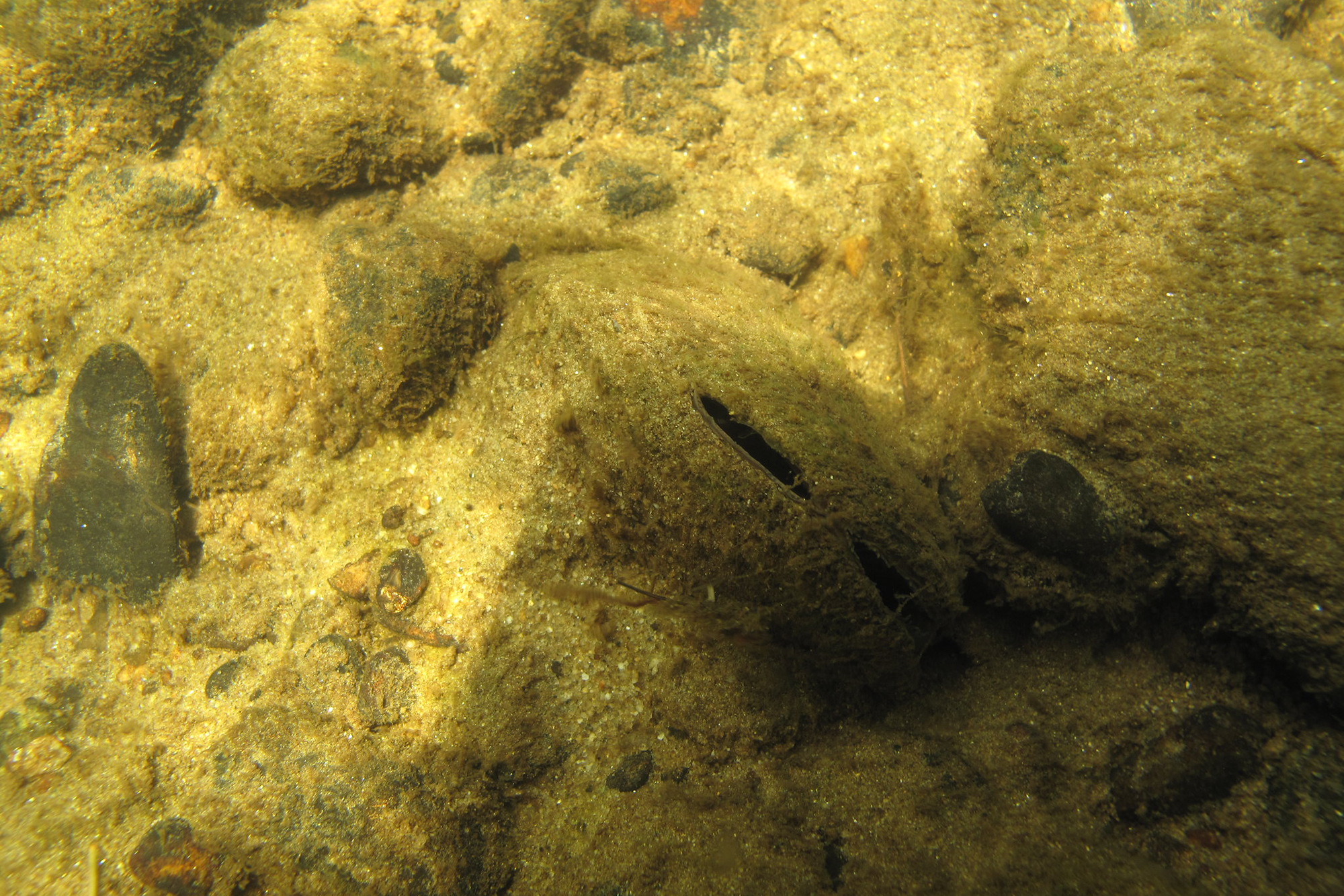 It might not sound tasty, but what comes out of a mussel is good food for the ecosystem, too: Their fecal pellets nourish aquatic invertebrates at the base of the food chain.

“Because mussels excrete nutrients, they create little gardens of algae on their shells that other organisms eat,” explains Vaughn. “And with their feces — their biodeposits — they’re providing organic matter to the bacterial community in the sediment.”

Mussels themselves also become food for a variety of predators, including fishes, turtles, birds, racoons, otters, and muskrats who, in due course, also return nutrients to the ecosystem. And the cycle continues…

Mussels in healthy streams often cluster together, which makes them “a living part of the substrate,” according to the Xerces Society for Invertebrate Conservation. The infrastructure created by these mussel beds — and the spaces between them — provide shelter to small fish, algae, insect larvae, aquatic worms and snails, and other invertebrates.

A 2019 study found that “both mussels and empty shells increase interstitial spaces in the substrate, which are important habitats for fish and their prey,” the researchers wrote. This even pays off after mussels die or get eaten, as “their spent shells might offer refuge from larger aquatic predators.”

The rivers and their banks also benefit, as additional research has shown that living mussels help to stabilize sediments and prevent erosion or species displacement. “When you have a good healthy mussel bed, that actually helps all the organisms stay in place during a flood event,” says Vaughn.

“The presence of adult mussels and the resources that increase in their presence potentially mitigate stress to fish in ‘ecological crunch times,’” the researchers wrote. “By conserving mussels, fish populations might withstand droughts more easily.” 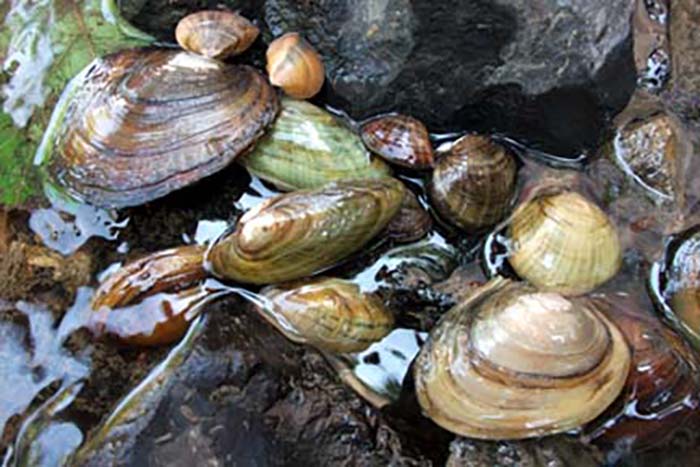 That’s something that’s going to become even more important as climate change exacerbates drought conditions and reduces stream flows on which fish depend.

“Freshwater mussels have the potential to serve as important sentinels or biomonitors of environmental change, revealing past conditions and monitoring future change,” Vaughn wrote in the journal Hydrobiologia.

That’s because many of these species are long-lived, some with lifespans of 70 years or more. They move very little and burrow into the streambed; they absorb nutrients and chemicals from the water. This means that their body tissue and shells become a record of water quality in a given spot over a long period of time.

“You can actually go back and look at mussel-shell rings and see what chemicals were in a river 60 or 70 years ago,” Vaughn tells us.

That’s not all. A 2019 study done in the UK found that the annual bands on mussel shells, much like tree rings, can also document seasonal water temperatures. This can help “establish baselines for understanding future climatic change and support conservation efforts aimed at protecting temperature-sensitive taxa,” the researchers concluded.

Other researchers are working on putting an economic value on the jobs that mussels play in freshwater habitats, but it’s not easy.

“Most people are worried that by doing that, we’re undervaluing them,” says Vaughn.

But it may also be necessary.

“Despite uncertainty about the precise value of freshwater mussels, it is clear that they have substantial value to humans, possibly many millions of dollars in individual ecosystems, which should be taken into account in environmental decision making,” wrote freshwater ecologist David Strayer in a 2017 research paper. “Mussel ecologists and biologists can play important roles in helping society better value freshwater mussels.”

The rest of us can, too.

Tara Lohan is deputy editor of The Revelator and has worked for more than a decade as a digital editor and environmental journalist focused on the intersections of energy, water and climate. Her work has been published by The Nation, American Prospect, High Country News, Grist, Pacific Standard and others. She is the editor of two books on the global water crisis.