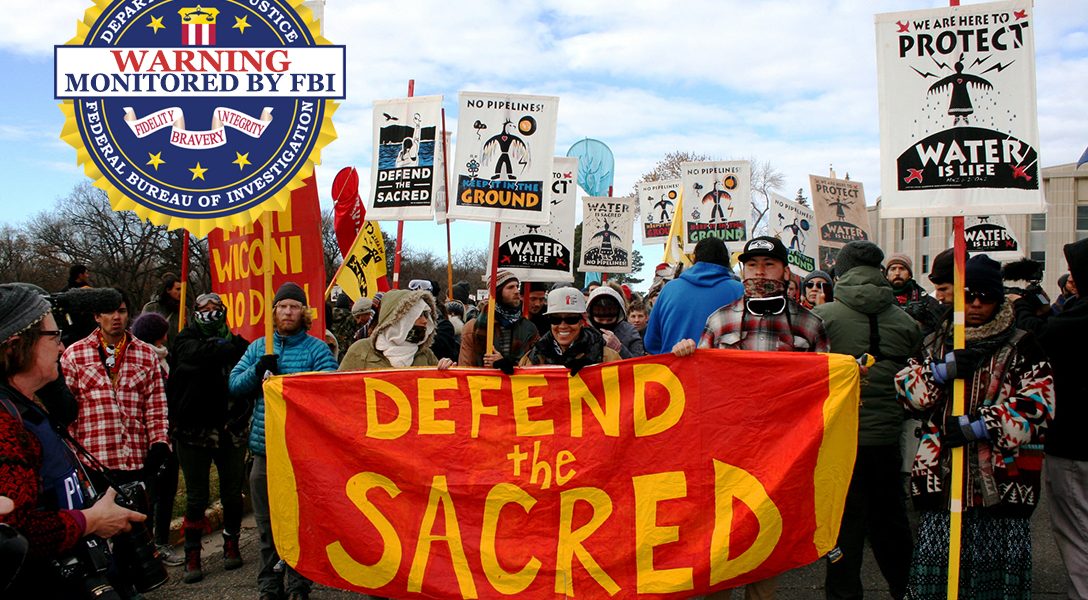 FBI Continues to Break Its Own Rules by Tracking Protesters

The FBI has, once again, violated department protocol by tracking environmental activists and nonviolent protesters, according to documents the Guardian recently obtained through a Freedom of Information Act (FOIA) lawsuit.

Because the FBI withheld all but seven pages of a 32-page file, many questions remain about why and how the Bureau snooped on 350.org, a climate-activist organization with a collaborative network that extends to 188 countries.

Why track 350.org? The ostensible reason is that the FBI sought to assess whether this very large group posed a danger ahead of a series of protests in 2016. 350.org’s “Break Free from Fossil Fuels” campaign involved 30,000 people who participated in events on six continents to protest dependence on oil, coal, and natural gas.

The organization’s event in Whiting, IN, occurred on May 15, 2016, and involved about 1,000 protesters who marched on the British Petroleum refinery, BP’s largest refinery in the world.

Several of the protesters were arrested, including Jonas Magram, Thom Krystofiak, and Inga Frick, all of whom were in their 60s and had driven about five hours to the protest from their homes in Iowa. These arrests were described in a document drafted by the Omaha FBI field office, which oversees Nebraska and Iowa.

The FBI file says the nonviolent protesters blocked traffic and trespassed, but Krystofiak disputes this, saying three miles of streets were closed by law enforcement for the permitted event. Documents released to the Guardian show the FBI spied on a group of nonviolent environmental protesters. Photo credit: Adapted by WhoWhatWhy from Scribd, Scribd, and David Wilson / Flickr (CC BY 2.0).

“The fact that the FBI is tracking civil disobedience arrests and logging that information into FBI files is quite troubling,” Mark German, a former FBI agent and fellow with the Brennan Center, told the Guardian. Without evidence of planned violence, German said, the FBI doesn’t have much justification to open an investigation on individual activists.

He suggested that such tracking actually fuels militant police actions against protesters, as seen most notably at Standing Rock.

German told the paper that opening an FBI probe about potential danger stirs up fear that “leads to a certain kind of response that increases the police violence that occurs at these protests.”

Neither the Omaha nor the LA field office could be reached for comment.

Although the FBI opened no specific investigation into 350.org, one of the released files notes that the organization is “referenced in multiple FBI investigations and assessments” and names its founder, Bill McKibben.

The files are catalogued as part of a domestic terrorism case and characterized as “Sensitive Investigative Matter” which, according to the FBI’s Domestic Investigations and Operations Guide, concerns elected officials, journalists, and political organizations, and requires approval from the chief division counsel (CDC), the top lawyer in the field office, and the special agent in charge (SAC).

But the FBI has repeatedly ignored its own rules governing these types of investigations. In 2010, the US Department of Justice released a report detailing wrongful tracking of activist groups, including Greenpeace and Catholic Worker. Five years later, the FBI wrongfully opened an investigation into “environmental extremists” protesting of the Keystone XL pipeline; one protestor, whose name was added to a government watchlist, has been subjected to more invasive airport security measures.

“Trying to deal with the greatest crisis humans have stumbled into shouldn’t require being subjected to government surveillance,” McKibben told the Guardian. “But when much of our government acts as a subsidiary of the fossil fuel industry, it may be par for the course.”