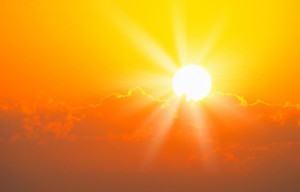 Some like it hot. So at least some may be happy with the latest news on global warming.

According to the National Oceanic and Atmospheric Administration (NOAA), the time interval between January to October 2014 has been the hottest in the world since record keeping began in 1880—even though the average temperature in the American Midwest has been below the 20th century average.

And October 2014 was the highest on record for that month—at 0.74°C (1.33°F) above the 20th century average—based on global temperatures. Go here for more on this story at CNN. Go here for a story about American attitudes toward climate change. And for our own comprehensive introduction to climate chaos, with dramatic graphics showing the loss of ice over time, go here.

ON THE OTHER HAND…

Who believes anymore in wattsdownisup.comical?

“The Space and Science Research Corporation (SSRC) announced climate change predictions dealing with the coming cold climate epoch that will dominate global temperatures for the next thirty years.

2. Between 2015 & 2016 average global atmospheric and oceanic temperatures will drop significantly and will continue lasting most of the 2030’s and 2040’s. The bottom of the next global cold climate is by 2031.

3. The predicted temperature decline will continue for the next fifteen years and will likely be the steepest ever recorded in human history.

This average lower global temperature of 1.5° C on average, translates to declines in temperatures that will be devastating for crop growing regions in the mid latitudes of the planet.”

The pseudoscience posted by Patriarch on the SSRC comes to you courtesy of the Koch Brothers. Go to their website http://www.spaceandscience.net/ — and you will find intellectual BOTOX.

Poor Credentials: The Space and Science Research Corporation (SSRC) is run by Mr. John L. Casey, whose highest degree is an M.S. in Management.

No Publications: Well, Casey has one “publication,” which he calls a “peer-reviewed.” Only he doesn’t say where it’s published. It seems that only he himself “publishes” it.

Koch Brothers Support: Casey says of himself, “He was named ‘America’s best climate prediction
expert,’ by Watchdogwire.com in March 2013.” Watchdogwire.com says it is “a project
of the Franklin Center for Government & Public Integrity.” From Media Matters:

“The Franklin Center is… Funded by major conservative donors, staffed by veterans of groups affiliated with the Koch brothers, and maintaining a regular presence hosting right-wing events, the organization boasts of its ability to fill the void created by state newsroom layoffs.” http://mediamatters.org/blog/2012/07/11/how-a-right-wing-group-is-infiltrating-state-ne/187059

According to record, 1936 was the hottest year in recorded history, with a recorded temperature of 120 degrees in south Dakota!

Go back and check your facts. Your information is coming from bureaucrats not environmental scientists. You guys are idiots if you believe one iota of information put out by the United Nations panel on climate warming. Not one is a scientist, They are bureaucrats living on the public teat, protecting their cushy high paying jobs by scare mongering and public coercion.