The famous bird’s-foot delta of the Mississippi River is losing land in most areas but gaining in others. Photo credit: NASA/GSFC/METI/ERSDAC/JAROS, and US/Japan ASTER Science Team
Environment

This story by Mohammed El-Said originally appeared in EOS and is republished here as part of Covering Climate Now, a global journalism collaboration strengthening coverage of the climate story.

Home to hundreds of millions of people worldwide, coastal deltas are vulnerable to sinking due to multiple factors such as sea level rise, land subsidence, and the decline in sediment supply.

Austin Chadwick, a postdoctoral associate at St. Anthony Falls Laboratory at the University of Minnesota, explained that rivers naturally fight back against land loss by depositing sediment carried from upstream. Engineered features such as dams, as well as natural phenomena like course changes, can reduce the sediment available to river deltas, slowing deposition and hindering the river’s ability to counteract land loss.

The authors found that the amount of land lost is actually greater than expected. “This is because traditional techniques have not accounted for the fact that rivers change course over time,” Chadwick explained. “When rivers change course, they temporarily build land that later drowns after the river changes course again. This process leaves less of the river’s sediment resources available to sustain the persistently dry and habitable land, leading to more extensive land loss.”

According to the new study, sufficient river sediment is not being delivered to keep delta land dry in the face of sea level rise. The results were published in the Proceedings of the National Academy of Sciences of the United States of America.

To estimate deltaic land loss, Chadwick and his colleagues developed a model and conducted an experiment. They built a simulated river delta in the laboratory and captured images of sediment flow each minute over the course of 105 hours and four phases of successive sea level rise.

At any given time, deltas are expected to gain land in some areas (the active lobe) and lose land in other areas (the inactive lobes).

The researchers focused on delta lobes, wetland formations that perpetually form and disintegrate over time. “It is known that delta plains are built from multiple delta lobes, typically with one active at a time,” explained Benjamin Cardenas, an assistant professor of geosciences at the Pennsylvania State University who was not involved in the research. Thus, at any given time deltas are expected to gain land in some areas (the active lobe) and lose land in other areas (the inactive lobes). 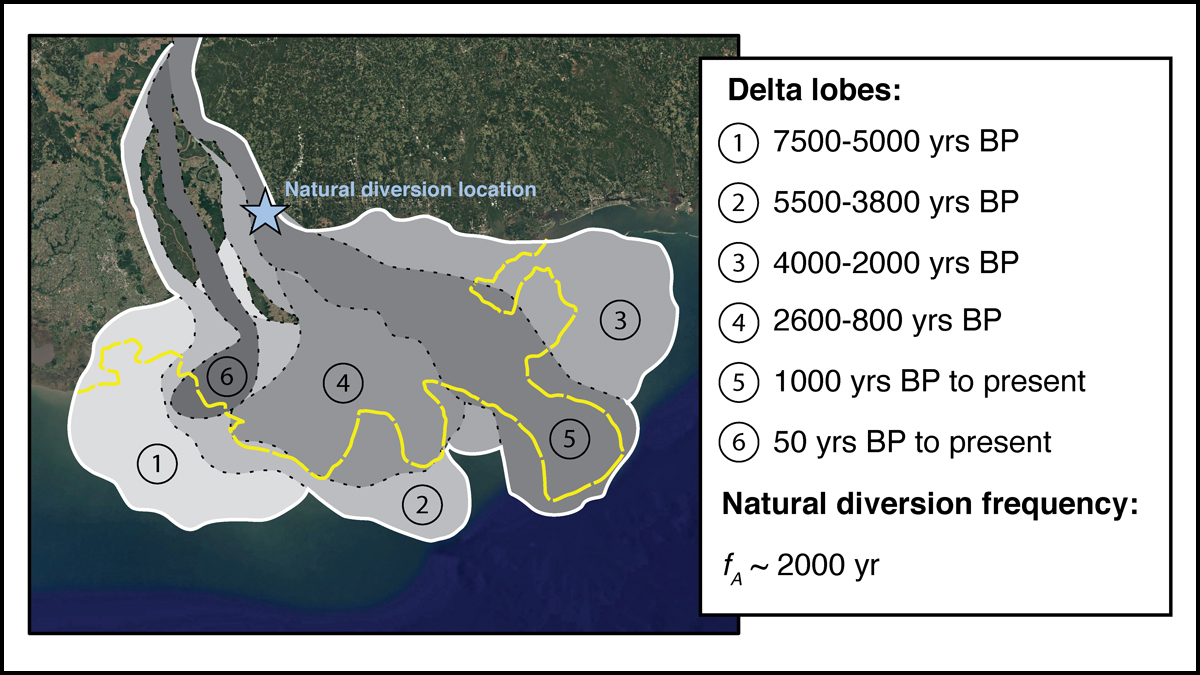 The Mississippi River delta plain is composed of multiple lobes. Each lobe was built by a different path of the Mississippi River, which has naturally diverted its course about every 2,000 years (see inset). Photo credit: Austin Chadwick / EOS

Accordingly, the authors modeled sediment deposition to occur on a single active lobe at a time, instead of modeling an even deposition across dry land at delta plains. “This is important because the assumption is more realistic (and agrees with a physical experiment), and it significantly increases the predicted percent of land loss in a number of real delta systems where people live,” Cardenas said.

The process of deltaic land loss and land gain takes years and even decades to occur and depends on factors independent of sea level rise, although the authors maintain that phenomenon is the most important.

Another important factor contributing to deltaic land loss and gain is how frequently rivers change course. This frequency varies from delta to delta but is typically between every 10 years and every 1,000 years. Knowing when the river will jump course is very important because after changing course, the delta lobe hot spots of land building and land loss shift.

“We developed a new modeling tool that accounts for rivers changing course during sea level rise. Using this tool, we present improved sediment budgets for deltas across the globe. For a given delta, the budget tells us how much sediment is needed — and how frequently the river must be allowed to change course — in order to keep coastlines stable,” said Chadwick.

Vamsi Ganti, an assistant professor of geomorphology and land surface processes at the University of California, Santa Barbara, also noted the tool’s ability to isolate the effect of river course changes, which he said had not been dealt with before. “So it is comparing results of land loss to the model that does not account for river jumping.” Ganti was not involved in the research.

Additionally, Ganti said that the study’s extent of sediment supply required for sustaining deltas when compared to previous estimates “is really surprising.”

“For example,” he said, “the major deltas across the world, such as the Mississippi, Orinoco, Danube, and the Rhine, need as much as 3 to 10 times more sediment than is currently projected to be available to sustain the current dry land area.”

Chadwick and his co-authors said their model can be improved by incorporating additional factors that contribute to deltaic land changes. Such factors include offshore processes such as waves and tides and biological factors such as the presence of mangrove forests. Ultimately, Chadwick said, the tool will help inform coastal management plans, which aim to forecast and mitigate land loss damages with engineered river diversions.