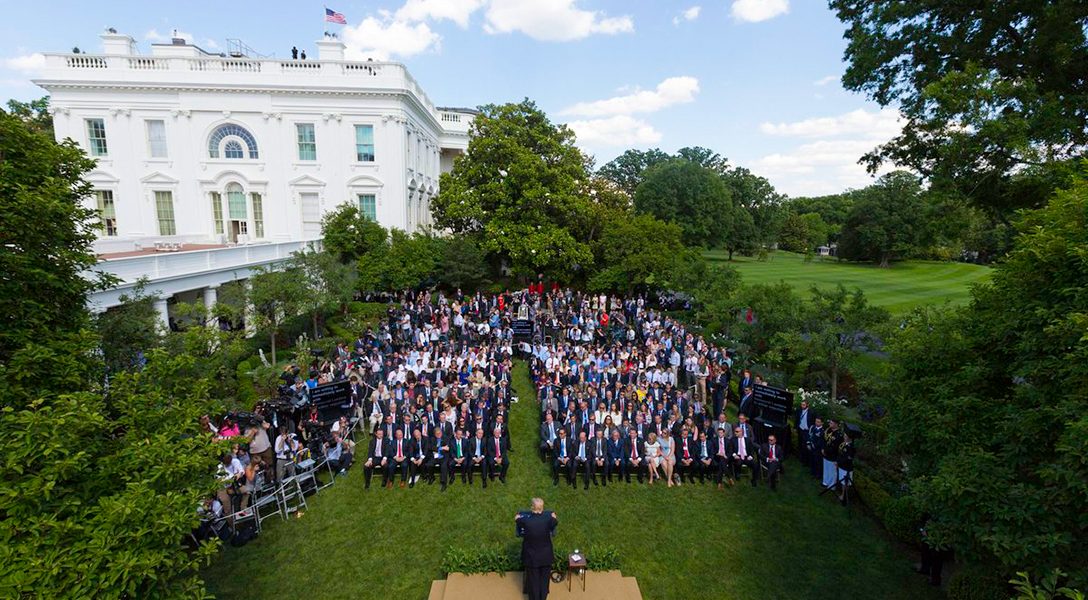 President Donald Trump making a statement regarding the Paris Accord on the White House lawn. Photo credit: The White House
Environment

Donald Trump vs. the Tide of History on Climate Change

President Donald Trump caused a global uproar on Thursday by announcing that the US would withdraw from the 2015 Paris Agreement to fight climate change. He also waded clumsily into the scientific debate over global warming by citing MIT scientists:

“Even if the Paris Agreement were implemented in full, with total compliance from all nations, it is estimated it would only produce a two-tenths of one degree Celsius reduction in global temperature by the year 2100,” Trump said.

But the scientists say he misunderstood their research: John Reilly, co-director of the MIT Joint Program on the Science and Policy of Global Change, fired back,

“If we don’t do anything, we might shoot over 5 degrees or more and that would be catastrophic.”

Picture the usual apocalyptic scenario: hurricanes, tidal waves and other natural disasters ripping through our cities as temperatures and water levels rise across the globe. But while that’s indeed likely to follow, and pretty much everyone in the scientific community agrees that inaction now would only increase the eventual price we’ll have to pay for dealing with our climate problem, there’s a lot more to that debate than meets the eye. Subtle nuances about what surviving the impending disaster might mean are often getting lost in media coverage.

Reilly and many others, in fact, are cautiously optimistic, saying that technology would eventually help us to achieve sustainability — something that Trump may have picked up on, disregarding key parts of the MIT study he cited.

“Unfortunately, the new administration appears to be fighting the inevitable tide of history that will eventually bring us a climate policy and clean energy revolution,” said Reilly in an interview with WhoWhatWhy prior to this latest Trump announcement.

He described a kind of cyclical pattern where, driven by greed, humanity periodically comes close to the brink, only to pull back with the help of science, technology and the wealth they bring us. He gave as an example the lack of sanitation in European cities a few hundred years ago, which brought about disastrous epidemics and was eventually resolved with the help of investments and technology.

“Technologically, certainly there are some ways [of solving the global warming problem],” Reilly said. “They are just fairly costly. But if we continue to get wealthier as a world, and if we can make these processes as efficient as possible… it’s not a prohibitively expensive cost.”

Not everyone in the scientific community is quite so sanguine — others theorize a “point of no return” that we may be fast approaching, raising concerns that some of the damage we are doing is irreversible.

Still, scientists are already working on a host of possible fixes ranging from the fairly mundane solar panels and carbon-capture methods (such as a US navy experiment that turned seawater into carbon-neutral fuel) to the Nobel Prize candidates (such as fusion-powered civilian nuclear reactors) to laughable Nobel prize wannabes (including contraptions to reflect sunlight back into space and an epic Arctic “ice machine” that would cost as much as the Manhattan Project). We already know how to take carbon out of air and water, the optimistic school of thought says — it’s only a matter of time before we obtain the clean energy, and the efficiency, to really take charge and clean up our giant mess.

For anyone with a sci-fi bent, this is the start of a long and exciting path to conquering our planet, our galaxy, and perhaps eventually gaining something like civilizational immortality.

“My view is that it would be part of the biological revolution that in the next 50 years or so we would be able to design forests that generate liquid fuel instead of wood, and that would be a cheap and simple way of using energy from the sun, and it’s also good for the environment,” Freeman Dyson, a legendary physicist who has inspired generations of physicists and science-fiction fans alike, told WhoWhatWhy.

Michio Kaku, another theoretical physics celebrity, uses the Kardashev scale, a model which classifies a civilization’s advances according to the amount of energy available to it, to map our future. We have a long way to go, according to him, as we haven’t even harnessed the energy of our planet properly yet. Further down the road, we could expect sci-fi miracles such as floating cities, Dyson spheres (named after Dyson) that capture all the energy of a star and space travel to other galaxies and perhaps even universes — which would theoretically give our civilization immortality as then we could even escape the Big Crunch.

Assuming we don’t blow ourselves up in the process, of course — Dyson, for example, still considers nuclear weapons the single biggest threat to humanity.

Greed is also an ever-present menace: at every stage of our development, we’ll face temptations and dangers. Today it is carbon emissions and nuclear energy — whose dark face we see not only in nuclear weapons, but also in power plant disasters such as those in Chernobyl and Fukushima. A thousand years down the road, it could be anything, including, as Stephen Hawking recently theorized, an orbiting black hole. (“Almost anything else is more reasonable than that,” Dyson said when asked to comment. Hawking’s assistants turned down a request for comments.)

All this helps explain why many are critical not only of our meandering journey toward environmental sustainability, but also of our idea of sustainability itself.

“What people are really asking when they say ‘can technology save us?’ is ‘can the comfortable lifestyle to which I have become accustomed continue ad infinitum if we can just use different machines?’,” wrote Paul Kingsnorth, the author of Confessions of a Recovering Environmentalist (coming out in August), in an email. Kingsworth is also famous for his “end of the world” parties.

“What I’m talking about, and what I think most environmentalists are talking about, deep down, is not really anything to do with technology or science. The questions are much deeper than that. They are questions of meaning. What makes a meaningful human life? What is a meaningful way for humans to interact with the rest of nature? What intrinsic life, value, consciousness does the wild world have? What stories have we believed, incorrectly, that have got us to the point where we could change the entire climate and cause a mass extinction through our actions?”

(After the publication of this article, MIT’s John Reilly sent us a follow-up response qualifying the optimism he voiced and explaining further his thinking about irreversibility and climate change. You can find it here.)