This story by Karin Kirk originally appeared in Yale Climate Connections and is republished here as part of Covering Climate Now, a global journalism collaboration strengthening coverage of the climate story.

As the US economy recovers from the COVID-19-induced recession, the emphasis is shifting away from the simplified metric of the number of jobs toward a focus on high-quality, high-paying jobs. As some service sectors languish with unfilled positions and shorthanded staffing, the energy industry pays premium wages. Energy workers are paid 34 percent more than the median US wage, according to the 2020 US Energy and Employment wage report.

A bygone talking point of the fossil fuel era was that high-paying oil, gas, and coal jobs are irreplaceable. But the data show a more encouraging reality: Clean energy jobs pay well, are plentiful, and are poised for major growth for the foreseeable future.

Homer Simpson of The Simpsons made at least one good decision in his life — nuclear energy generation is the top breadwinner in the energy industry, according to wage data from the Bureau of Labor Statistics (BLS).

The Department of Labor agency data shows parity between wages in the fossil fuel industry and renewables, with solar electricity generation edging out each of the fossil fuel sectors and wind being comparable to fossil fuels. That said, BLS does not track the wind and solar industries as closely as it does fossil fuels. For example, wind and solar jobs are tallied only within the utility sector and not in manufacturing wind and solar components. Nevertheless, the high wages in renewable electricity generation are an encouraging sign that top-dollar energy jobs will be part of the transition toward cleaner energy sources. 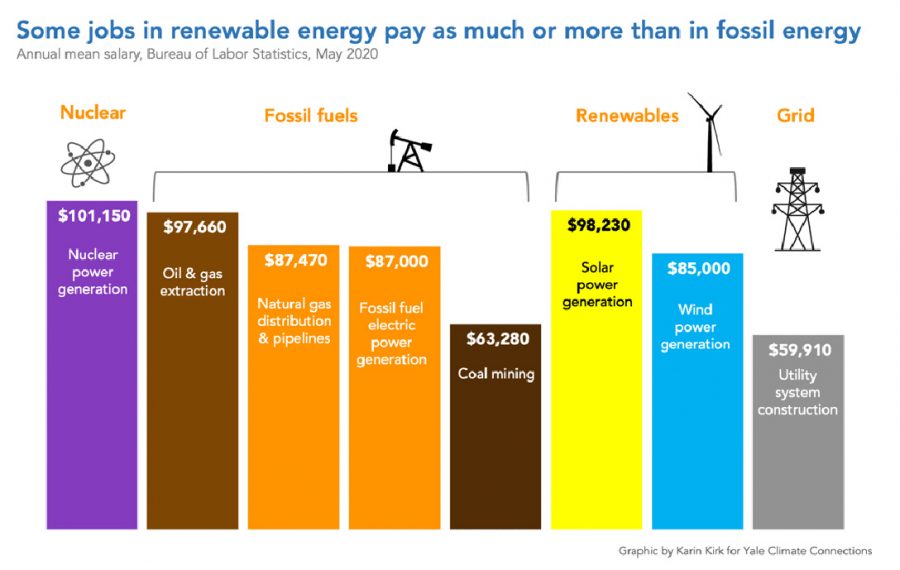 A Closer Look at Energy Wages

The 2020 US Energy and Employment Report’s supplement on Wages, Benefits, and Change takes a deeper dive into energy wages. The report pulls together different aspects of each energy sector so that entire industries can be analyzed as a whole and compared to each other. 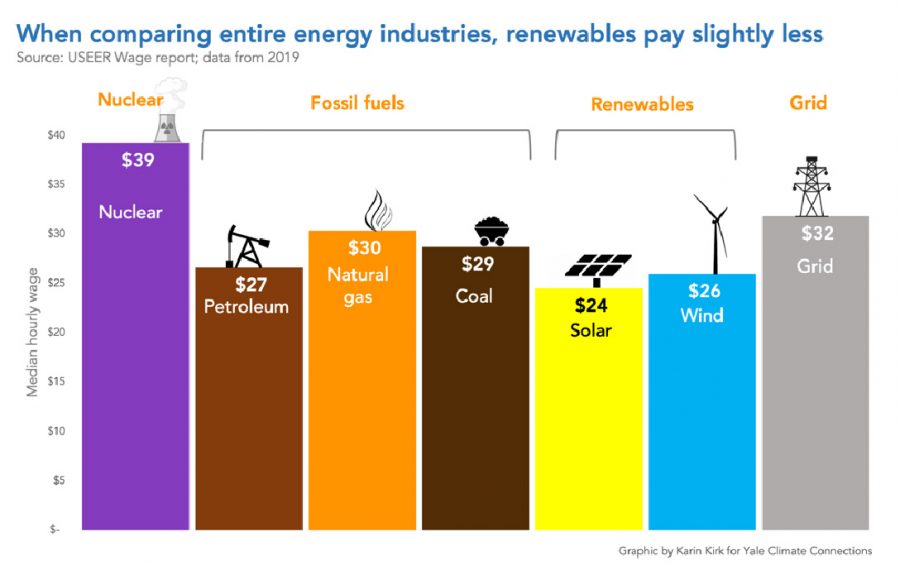 At first the results will seem to contradict the BLS data. The difference is that this tally captures industry-wide wages, in contrast to BLS data that examine only certain slices of each industry. In the industry-wide comparison, fossil fuels offer slightly higher wages than renewables. Taking a deeper look will show where those wage differences come from.

High-paying jobs are an important consideration as energy transitions from one industry to another, and those jobs lead to a frequent rallying cry of those opposed to moving away from a fossil fuel-based energy economy. Regardless of the relatively small differences between sectors, an important point is that all energy jobs pay well above the national average of $19 per hour, and the non-extractive sectors are growing swiftly. The future of extractive industries’ employment is much less certain. 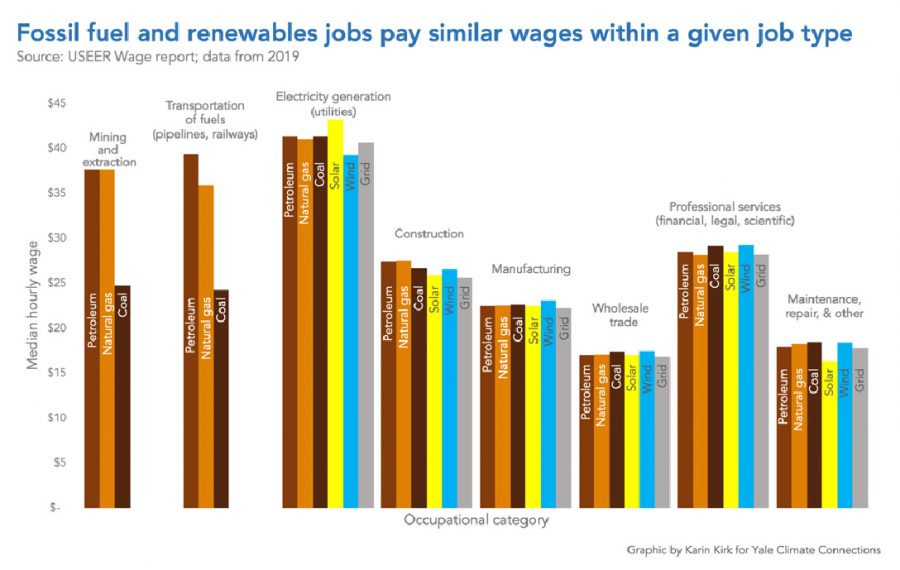 The next highest-earning occupations are in mining, extraction, and transportation of oil and gas. These jobs are frequently unionized and are known to offer high pay, high risk, and uncertain stability. But these extraction-based occupations do not exist in the wind or solar energy industries because no fuel is required to generate electricity from the wind or sun. In other words, there is no analog for mining and drilling jobs: The fossil fuel industry has them. Renewables don’t.

Coal mining stands out in contrast to other extraction jobs, fetching a much lower salary than a comparable job in oil and gas. The low pay may be partly explained by the fact that many coal mines are located in areas with little economic diversity, such as rural West Virginia and Wyoming. Another factor may be that coal companies are facing a starkly shrinking market.

Looking at other occupations, one finds that a given job pays similar wages across each of the energy sectors: Manufacturing jobs tend to offer comparable pay, regardless of which industry is doing the manufacturing. This wage parity applies to construction, trade, professional services, and maintenance.

Each Industry Has a Different Blend of Job Types

Another difference between energy sectors is the proportion of people employed within various occupations. In the following comparison, the contrasts between each sector become more apparent. The chart below is complicated, so the bullet points coming after it walk through the main takeaways. 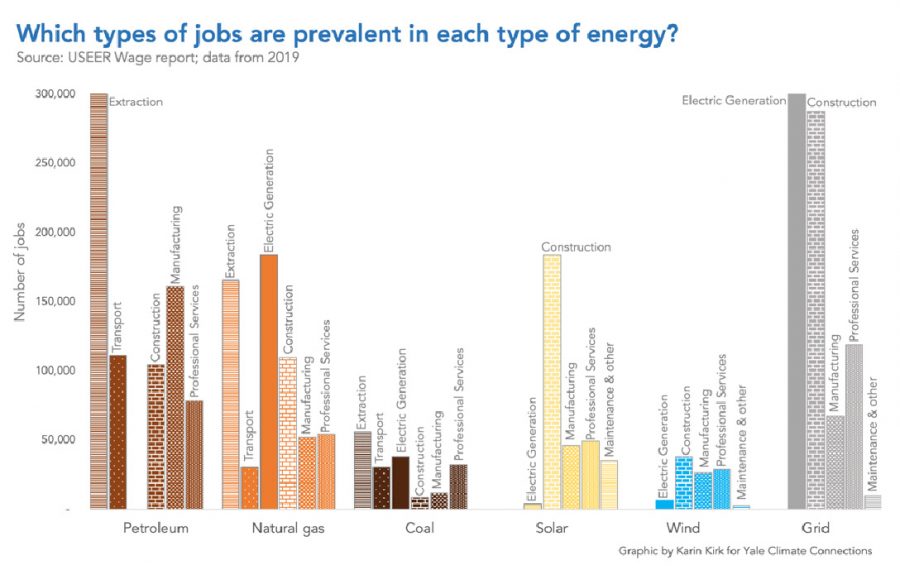 Boom, Bust, and Other Trends in Energy Employment

Careers in oil, gas, and coal have traditionally offered high pay but little in the way of job security. The industry is infamous for its cycles of boom and bust, sometimes growing or shedding tens of thousands of jobs in the course of a year or two. The rise and fall of Bakken oil in North Dakota is just one recent example. 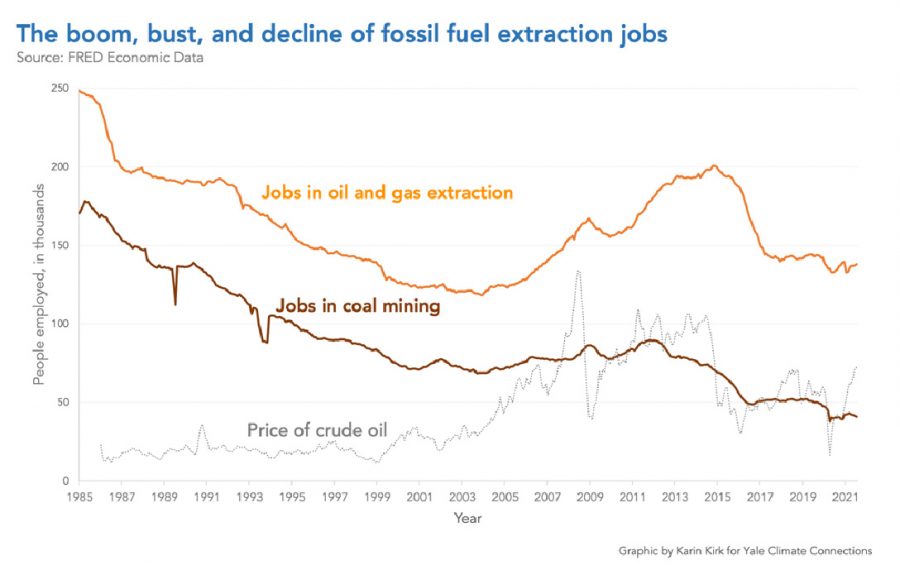 One driver of oil and gas employment is the price of oil, and as seen in the graph above, ebbs and flows in the value of crude oil foretell losses and gains in the size of the fossil fuel employment pool. The period from 2014 to 2017 offers a vivid case study, as the industry lost 30 percent of its workforce in the wake of a steep drop in oil prices.

The trend for coal mining jobs is solidly down. Mining has had small upticks but none of the larger bubbles enjoyed by the oil and gas industry. Coal mining has lost over 48,000 jobs since a brief rally in 2011, a decline of 54 percent in just 10 years.

Casting a wider net to look at employment trends between fossil fuels and renewables, the two appear to be heading in opposite directions: Fossil fuel extraction is declining, wind and solar are on the upswing. 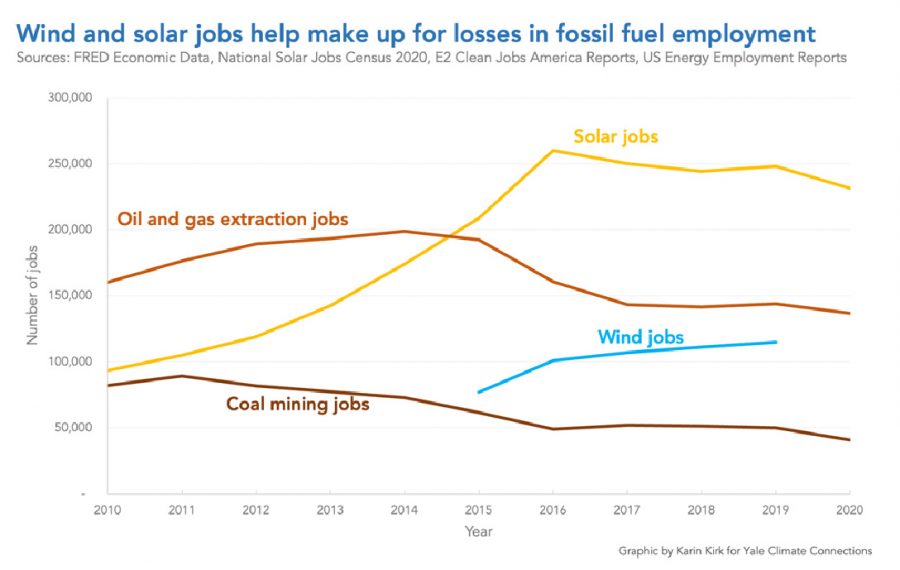 Note that the fossil fuel jobs plotted here are only for the extraction side of the industry. These make up the majority of jobs in fossil fuels, but not all of them. That explains why wind jobs appear more numerous than coal jobs in this graphic, but are fewer than coal in a previous graph.

If anything, bouncing back and forth between datasets and ways of comparing the industries shows that care must be taken to accurately wrap one’s head around the employment picture in various energy fields. A superficial talking point may not reflect the realities of the situation. 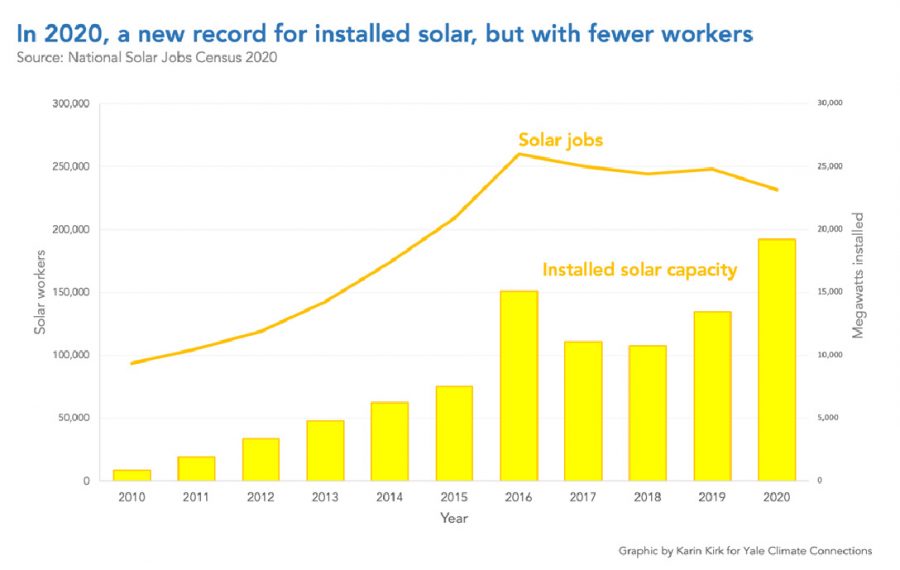 The 2020 Solar Jobs Census report gives a detailed look at solar employment trends over the past 10 years. Jobs in solar energy grew sharply in the first half of the decade, then leveled off. Solar installations grew steadily until 2016, then declined for three years before setting a new high mark in 2020, despite COVID-related shutdowns and slowdowns.

In a counterintuitive turn of events, the solar workforce in 2020 was smaller than in previous years, while the installed capacity of new solar panels was the highest to date. The explanation for this seeming contradiction is that solar projects are getting larger, with a shift toward more utility-scale solar farms in addition to smaller-scale residential systems. A trend toward larger systems means the number of installed panels per worker has increased.

Enormous Jobs Growth Ahead for Wind And Solar

The growth of wind and solar employment is projected to be somewhere between brisk and explosive, depending on which public policy path the US pursues. The Bureau of Labor Statistics is projecting 50 percent growth for solar photovoltaic installers and a 60 percent increase for wind energy technicians by 2029. The Solar Jobs Census is far more bullish, forecasting a 150 percent expansion in the solar workforce over the same time span with current energy policies, and 300 percent growth if President Biden’s goal of 100 percent clean electricity by 2030 is enacted into law. 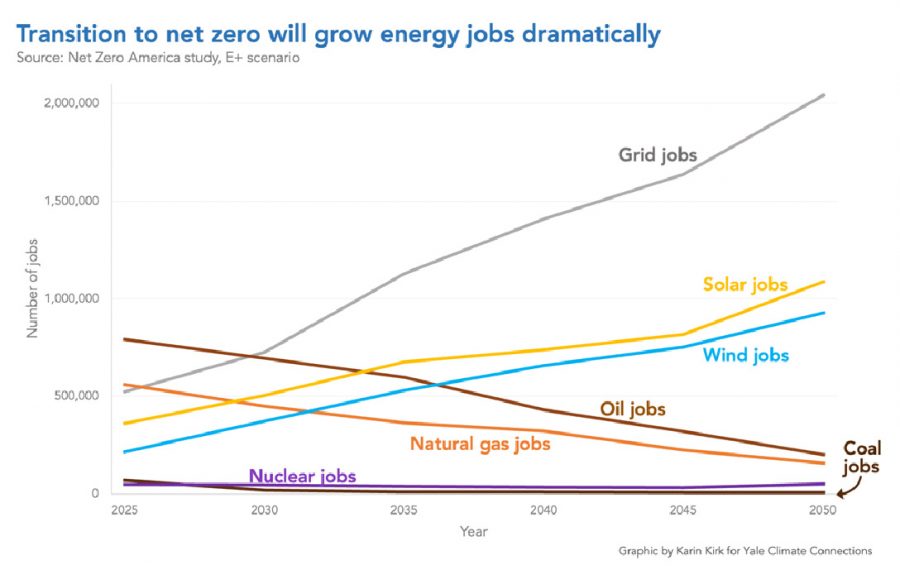 The Net Zero America study, led by Princeton University, forecasts a wholesale reshaping of the energy industry as a result of switching to low- or zero-emissions energy sources over coming decades. The upshot is that energy employment across the country will nearly double, and as the data at the outset of this analysis show, jobs in the energy economy earn well more than others in the general economy. This shift would bring an infusion of high-paying, stable careers to the US job market.

The coming boom in energy jobs has a lot to offer: Long-term employment with high wages, new technologies, and investment in the future of American energy. And these jobs will result in less pollution for everyone.