Damned If You Don’t: Vanishing Salmon and the Klamath River Dam Removal Project

For thousands of years, the Yurok have gathered along the Klamath River in northern California to honor the life-affirming runs of wild salmon. But these days their annual festivals have come to feel more like funerals than celebrations. There are so few salmon in these waters that the Yurok Tribe has had to resort to importing them from Alaska.

“Our economic, social, cultural, and mental health are dependent upon the Klamath’s salmon runs,” said Amy Cordalis, Yurok tribal member and the tribe’s general counsel. “When the river and salmon are unhealthy, we are unhealthy.”

Nearby, on the coast, the ocean air in Crescent City, CA, is no longer pungent with the smell of working fisheries. In the last 40 years, the quaint seaside town has seen a 96 percent loss in fisheries. A little further north, Brookings, OR, also has witnessed the loss of almost all of their fisheries. There just aren’t enough salmon to keep them running.

Further out, in the Pacific, by the California-Oregon border where the Klamath River spills out,
salmon boat fishermen are waiting. And waiting. There is so little to catch that the salmon harvested barely pay for the gas it takes for the boats to get out onto these cold waters.

The reasons for the decimation of the salmon runs are many, climate change among them. But the biggest culprit, actually the four biggest culprits, are the decrepit hydroelectric dams on the Klamath River. The first was built more than a century ago. They’ve become so obsolete the four are finally slated to come down as early as 2023, after decades of legal wrangling. The deconstruction will be the largest dam removal project in US history.

Will there be any fish to save by the time the dams come down? “We sure as hell hope it’s not too late,” said Glen Spain, the northwest regional director for the Pacific Coast Federation of Fishermen’s Associations. Spain has been involved in the Klamath River dam removal project for years. He has seen the consequences of the dams firsthand and knows what needs to be done. “People work hard to feed others,” he said. “Their entire livelihood depends on these salmon runs.” He’s eager to solidify a years-long plan after the dams come down to restore the Klamath habitat. “We need the political will to do it, and then we need to do it. We all need to work together.”

Richard Whitman, director of the Oregon Department of Environmental Quality, agrees. “The fish runs are in terrible shape. … Reestablishing the runs is important and dam removal is just the first step.”

The Klamath River was once the third highest producing salmon run in the United States. Before the dams, there were approximately 880,000 salmon that swam the river. Today, it’s down to approximately 42,700.

The first dam was built in 1918, without much thought for the ecological or cultural implications. That dam, and the three subsequent dams, provided energy to the area for generations. But they’re no longer profitable, nor do they provide the energy they once did. The relicensing of the dams, and upgrades needed to meet current requirements, costs more than the profits being made from the energy generated. This is to say it costs more for the PacifiCorp company to keep them up than to tear them down.

With the renewal process afoot, governmental agencies, tribes, nonprofit organizations, conservationists, fisheries, and others had the opportunity to evaluate the pluses and minuses of the four dams. There were many minuses. Could the dams generate enough electricity to make it worthwhile, and at the same time be environmentally friendly with appropriate upgrades? The resounding answer was no. The dams had a negative impact on fish and water quality. And the four dams produced a total of only 82 megawatts of power. Just one modern hydroelectric dam produces approximately 1,000 megawatts. One wind turbine creates 7 megawatts. A dozen wind turbines would produce more power than all four dams combined.

By 2010 Pacificorp agreed that the dams should be removed, and all signs point toward demolitions in 2023. 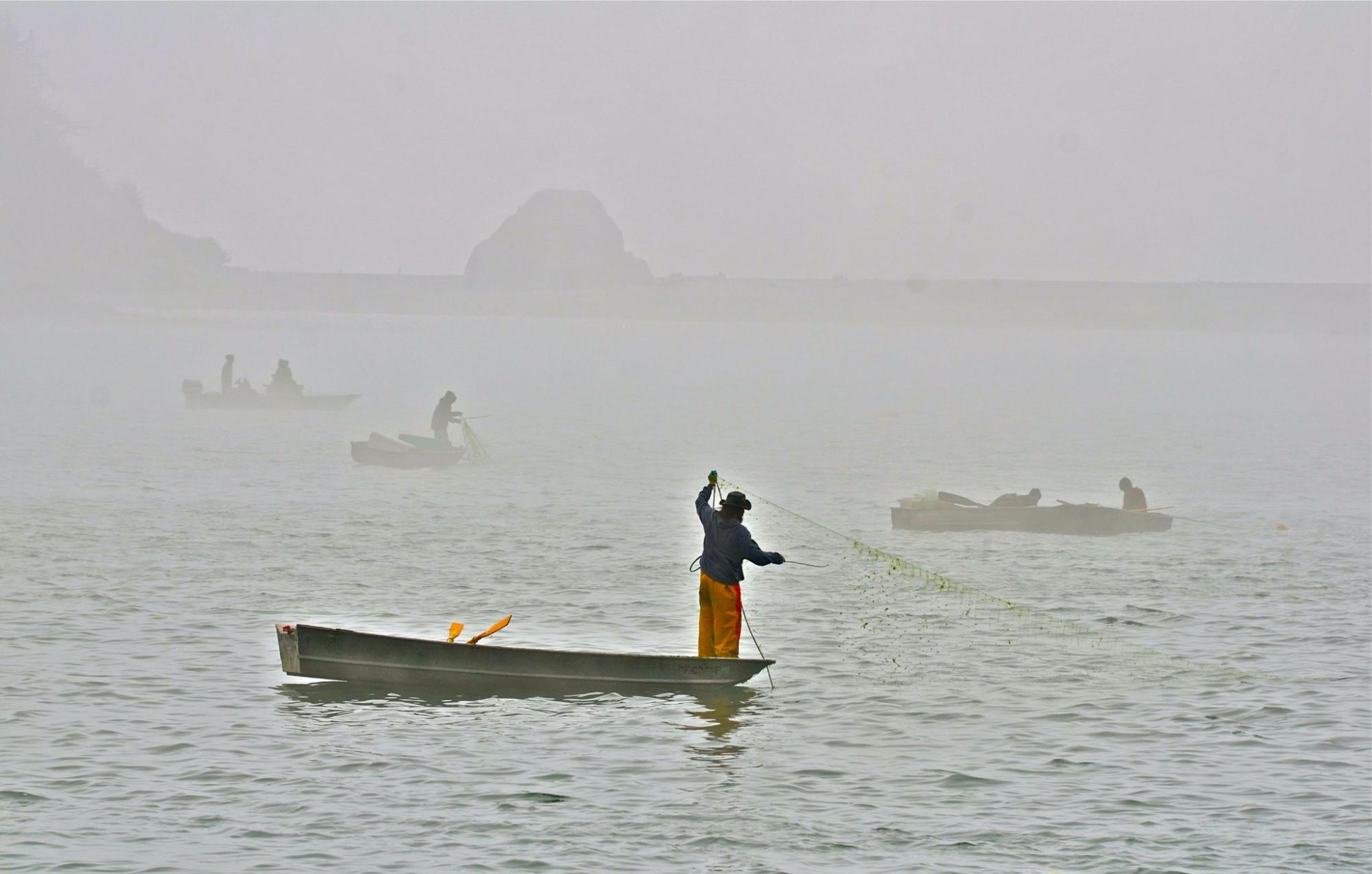 Fishermen line the waters at the sand spit across the mouth of the Klamath River for the short commercial salmon season. Yurok tribal members are allowed to harvest the fish in large gill nets; all others must fish with a line and pole. Photo credit: Linda Tanner / Flickr (CC BY-NC-ND 2.0)

But things are dire. What the dams have wrought, climate change has amplified. Droughts have further reduced the salmon. Forest fires, too. The warming waters in the reservoirs are creating algae blooms and parasite growth destroying what healthy populations remain. Infectious diseases in those waters are now rampant. Some estimates put the number of infected fish at over 90 percent, with a high mortality rate.

As animals are dependent on the salmon, so are the people who call the area home, notably the Indigenous nations that have lived in the the Klamath River Basin for millennia. The Yurok, Kuruk, Hoopa, Shasta, and Klamath Tribes have lived, worked, played, and died along the banks of the Klamath for thousands of years, though the Yurok are one of the few that never were removed from their ancestral lands in California.

Sami Jo Difuntorum, cultural preservationist and member of the Shasta Indian Nation, knows this all too well. Before the dams were built, the Shasta had villages there. But they were expelled from their land in California and removed to Oregon. Their villages were destroyed. “My ancestors came from those villages,” she said. “There are burials there. My people.”

Salmon are a part of the Shasta people’s lifestyle and culture. It has been, traditionally, their main source of food, as well. “We are a fish people,” Difuntorum said, “and still are.” But those fish are scarce and only getting scarcer. “Our way of life — it’s gone.”

Difuntorum has mixed feelings about the land after the dams are gone. The old villages, ceremonial sites, and gravesites will be exposed again. Currently, the Shasta have to ask permission to even visit their ceremonial sites, Difuntorum says, “We would like to recapture what we have lost.”

The losses have been staggering. The fish are all but gone. The tribes, dependent on the fish, have been decimated. The fishing towns on the coast have fisheries with cobwebs in their rafters. The fishermen on the reservoirs, rivers, and oceans are hauling in almost nothing.

Most everyone is eager for the dams to come down as quickly as possible. It will be helped by President Joe Biden’s recently signed infrastructure act. Congress has allocated $160 million for restoration of the Klamath River Basin.

“To have a free-flowing river again,” said Whitman, “will benefit everyone.” This would please Spain. “To recover and restore these damaged watersheds is a matter of peoples’ livelihoods,” he said. As for Difuntorum, she said that what she looks forward to are having ceremonies again. “It gives me hope.”