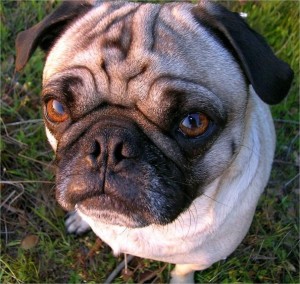 Take a look at an old photo of the iconic German Shepherd, Rin Tin Tin, who died in 1932. Now look at a photo of another of the breed, a German shepherd show dog of today. Notice the difference?

The second photo shows a German Shepherd with a sloping back and legs splayed apart. Some people call today’s German shepherds “half-frog dogs” because of the position of their legs.

Today’s dachshunds and basset hounds also look amazingly different from those bred as little as 50 years ago. Their legs are shorter, their bodies are longer, and their bellies almost drag on the ground. And Pekingese and pugs have flatter faces. Both have trouble breathing because of their pushed-in noses. Breathing is harder for Pekingese dogs that are bred with flat faces. (Photo from UKC.)

These remarkable changes stem from an obsession among dog breeders to create the perfect dog—perfect that is, according to the standards for purebreds competing in dog shows like the annual extravaganza of the Westminster Kennel Club. This breeding is slowly disfiguring, often in unbearable ways, the very animals that dog show fans claim to love.

Now, a number of concerned animal-welfare people, along with allies in the dog-show crowd, are trying to change the way breeders manipulate the genome of these animals.

No breed has suffered more from the quest for “exaggerated” features than the Pekingese—a breed once favored by the Emperors of China. Back then, the animal would have looked very different than the show dogs of today. In the last thirty years, Peke show dogs have undergone troubling changes.

“A Peke actually had a nose in the 1980s,” says Wayne Cavanaugh, president of the United Kennel Club (UKC). “It was pronounced just enough to give them an airway. Today’s Pekingese winners are photographed sitting on blocks of ice because they are overheated and are just barely breathing.”

Peke faces didn’t go from two inches to one overnight. They changed gradually. “We are talking about a fraction of an inch here and there over time,” explains Cavanaugh. “These changes are becoming acceptable, and there is a trickle-down effect because I’m seeing it on the street.”

Both got their start in the late 1800s.  One major difference between the two organizations is that UKC focuses on the Total Dog, which means that all dogs must compete in agility courses. Proponents and animal welfare advocates boast that—unlike the AKC—dogs that compete in UKC events don’t have pushed in faces, short legs that can’t run an obstacle course, and other exaggerated features. By contrast, in some AKC events, dog owners can enter their animals for competition based on looks alone, although they do have agility for some breeds.

Cavanaugh is no stranger to the American Kennel Club. He was its vice president, before leaving the organization to take over the UKC. He told WhoWhatWhy that he has made a number of enemies speaking out against extreme breeding standards, often hearing criticisms in a workshop he leads for UKC judges. “The first day they are mad at me,” he explains. “Then they get it.”

They “get it,” Cavanaugh says, because he’s been there—having served as a judge at the Westminster Dog Show. “I did it too. And now I understand how we let this go on. You see when you are in the show ring, and are judging 10 Pekingese all lined up next to one another, your eye tends to be drawn to the one with the more exaggerated features. That is the one that you tend to choose as the winner.”

Sherry Woodard, animal behavior consultant at Best Friends Animal Society, is seeing many purebred dogs with health issues at animal shelters around the country.  “Anytime a breed is highlighted at a major show like Westminster, people run out to get that breed. About 20 percent of the dogs at animal shelters are purebreds.  Purebreds are great. However, we are seeing more of them at our shelters, and many have health problems.” Breeders regularly mate father/daughter, grandfather/granddaughter, mother/son, and grandmother/grandson with the expectation that desired genes will be transferred to the next generation. Unfortunately, such inbreeding (within limited gene pools) ensures that unhealthy traits and behaviors will also be passed down.

The pressure to create these perfect dogs comes from AKC standards, the official guidelines by which dogs are judged at dog shows. Each AKC-recognized breed has a national parent club whose members write the standards. Standards can specify everything from a breed’s eye color to the curvature of the dog’s tail.

“For bulldogs,” says James A. Serpell, a professor of Animal Ethics and Welfare at the University of Pennsylvania’s School of Veterinary Medicine, “the distance between nostrils and the stop (that is the base of the forehead) should be as short as possible.” The result is not just disfiguring, he says—it’s dangerous to the dogs. “That is asking breeders and show judges to push that dog’s nostrils back into its head, and that is what they have done for the bulldog, Pekingese, and the pug,” he says. “These dogs have trouble breathing.”

While the problems created by inbreeding are most acute among show dogs, Serpell says, they are also showing up among some companion animals: “Nowadays, many breeds are highly inbred and express an extraordinary variety of genetic defects as a consequence: defects ranging from anatomical problems, like hip dysplasia, that cause chronic suffering, to impaired immune function and loss of resistance to fatal diseases like cancer,” says Serpell. “The only sensible way out of this genetic dead-end is through selective out-crossing with dogs from other breeds, but this is considered anathema by most breeders since it would inevitably affect the genetic ‘purity’ of their breeds.”

Hoping to reach breeders so that they would change the standards, Serpell organized a conference between leading scientists, veterinarians, and others interested in the health and well being of animals. He invited breeders to attend the conference, hoping to start a dialogue between the different groups. But it never happened. After learning the event would be hosted by the Humane Society of the United States, an animal welfare group, breeders balked.

“AKC breeders sent out emails requesting that everyone boycott the event,” Serpell told WhoWhatWhy. “We just wanted to share information about the well-being of dogs and the negative effects of inbreeding,” he says. “Unfortunately, they didn’t want to listen. It was a great event with lots of helpful information. However, the scientists, veterinarians, animal welfare people, and others who are concerned for the dogs’ welfare would have liked to have shared this information with breeders who can make these changes, which are beneficial for the dogs.”

“It used to be that dogs looked a certain way based on what they were bred for,” says Dr. Stephen Zawistowski, science advisor at the ASPCA. “ “Today, because of these exaggerated features, a basset hound in the show ring with short legs and an elongated body would never be able to get through the fields after a rabbit. People who have lived with a basset hound will most likely purchase another basset hound after the first one dies—even if they are aware that the breed comes with specific health issues. They love their dogs and expect that their next dog will have similar traits. Common sense doesn’t always rule.”

Function is still paramount, however, among working dogs, such as seeing-eye dogs or K-9s for the police. The Seeing Eye organization breeds German shepherds that work with the visually impaired. “Our German shepherds are quite different from show dog German shepherds,” explains Peggy Gibbon, director of Canine Development.

In consultation with a geneticist, Gibbon selects the sires and dams and evaluates them for structure, temperament, and health. “Some inbreeding occurs because we work from a closed gene pool of select dogs. A certain amount of line inbreeding can be helpful because we are looking to develop and continue good traits in our dogs. We watch this closely, and I shop around for dogs from other breeders to increase the genetic diversity of our gene pool.”

Animal welfare groups have called for joint efforts with breeders to ensure that the animals’ health and well-being comes first. But many commercial breeders worry that animal shelters are hurting their bottom line by promoting the adoption of “rescue animals” over buying purebred dogs.

Sheree Moses, co-chair of the German Shepherd Dog Club of America, is one breeder who thinks the two sides have plenty of incentive to work together. “No one wants to breed a litter thinking half the puppies will have health issues or will die,” says Moses, who, with her ex-husband James, has shown champions at Westminster. She has had German shepherds since 1967 and is devoted to the breed. “As in every industry, there are responsible people and bad ones. We need to have the dog’s best interest in mind.”

One solution is to follow UKC’s Total Dog concept that focuses on dogs that are bred without exaggerated features. The idea is to favor animals that are close to their original forms, and those that are able to run agility courses. It’s a model that animal welfare workers want more breeders to follow. But if the quest to breed the so-called “perfect” dog continues, we will see a lot more animals with physical and behavioral problems.

If you’d like to learn more, watch this nine-minute video, The History of German Shepherds. It shows changes in the German and American breeds of the dog from the 1940s to the present.