Climate Crisis Forecasts a Fragile Future for Wildflowers and Pollinators

Think of climate change, and you’ll probably picture devastating floods, raging wildfires, or parched earth. For the environmentally savvy, coral bleaching or masses of refugees may also make it to the list. Not many of us would think of the vibrant wildflowers in nearby meadows as victims of climate change. But the future of these pretty blooms could be gloomy in the face of a warming planet, suggests a recent study published in the journal Frontiers in Plant Science.

This first-of-its-kind study, conducted in the UK, found that wildflowers across Northern Europe would likely see a steep decline in abundance — up to 40 percent. In the experimental study, the researchers simulated the warmer, wetter conditions predicted for the region due to climate change. Under this new scenario, some species of plants produced flowers with 60 percent less nectar and fewer or lighter seeds. Due to these changes, pollinating insects had to visit more flowers to gather the needed pollen and nectar, and visited each flower more frequently.

“Our results demonstrate that climate warming could have severe consequences for some species of wildflowers and their pollinators in agricultural systems, and shows that their community composition is likely to change in the future,” said lead author Ellen D. Moss, a research associate at Newcastle University in the UK.

While theoretical studies have predicted that climate change could accelerate pollinator losses and wildflower declines, Moss’s study marks the first time scientists have put the theory to the test in an experimental setting. And previous climate change studies have focused on a small number of either plants or pollinating insects in a particular region, and not looked at the effects at a community level.

“This study adds to the weight of evidence that pollinators are at risk from multiple stressors,” said ecologist Jane Stout from Trinity College Dublin, who was not involved in the study. “They are losing places to feed and breed, and they are stressed by pesticides, disease, and changes in climate.”

To do this, the researchers sowed spring wheat and a few native wildflowers, which grow on wheat farms, in small agricultural plots in a North Yorkshire farm. They then heated some of these plots with infrared heaters to increase the soil temperature by 1.5 degrees Celsius (2.7 degrees Fahrenheit) and they increased the water supply by 40 percent to mimic the predicted wetter conditions from future climate change for Northern Europe. The non-heated plots acted as a control in their experiments to compare their results with.

For two flowering seasons, 2014 and 2015, the researchers tracked the different plant species that grew in these plots, the number of flowers they produced, the volume of nectar in them, and the weight of the dried seeds resulting from the flowers. They also collected information about visiting insect pollinators, including their visiting patterns to both the experimental and untouched plots. 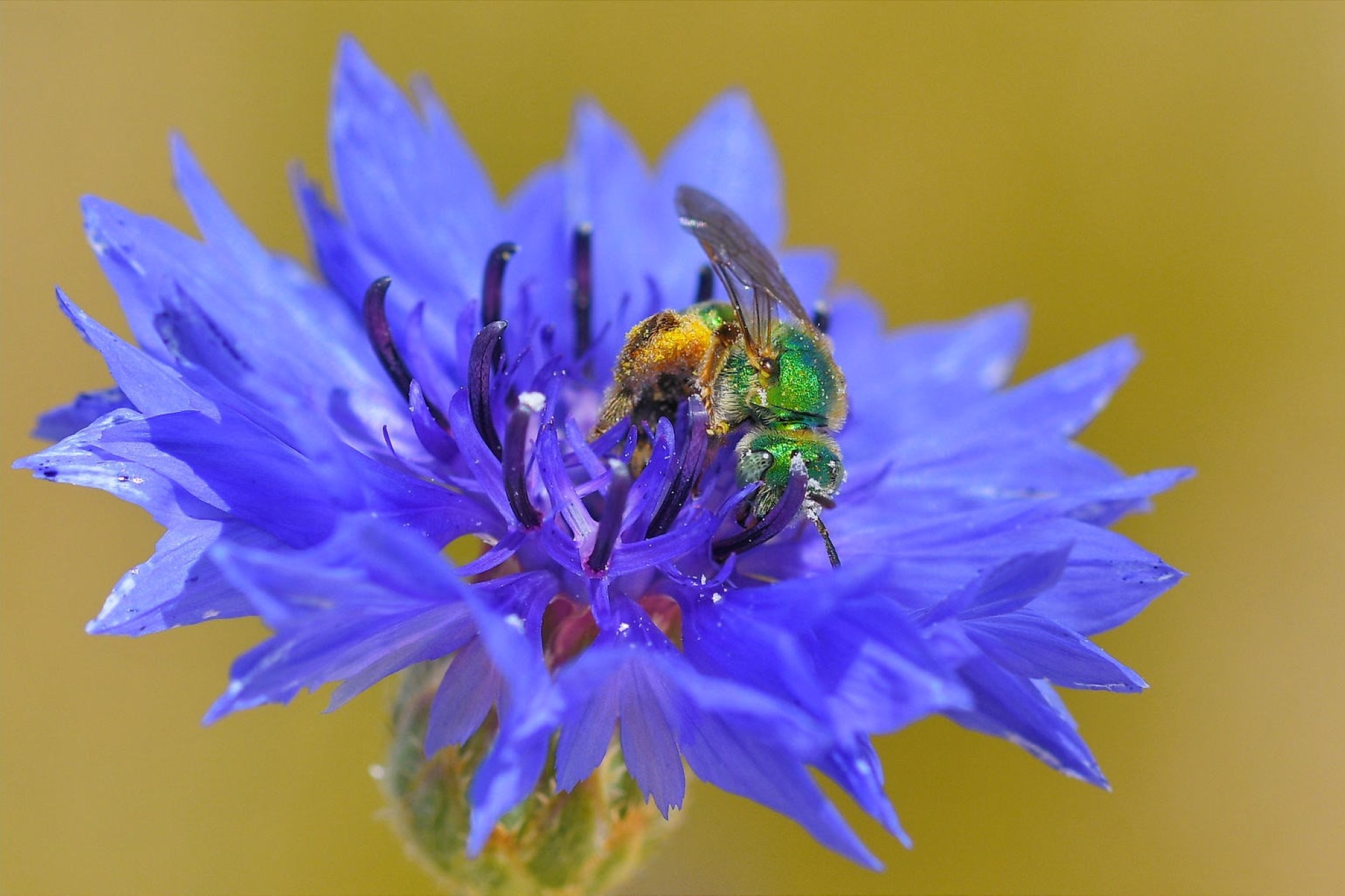 Cornflower, one of the abundant species of wildflowers in the study. Photo credit: Terry Lucas / Wikimedia Commons (CC BY 3.0)

Not only did wildlife abundance plunge by up to 40 percent in the heated plots, most of the plants in these plots also had fewer seeds in the seed heads, and the seeds weighed much less than those in non-heated plots. The only exception was the generalist weed known as common field-speedwell. While it produced more and heavier seeds in the heated plots, its flowers secreted 65 percent less nectar, making it a less popular flower with pollinators.

“A key finding [of the study] is that not all wild plant species respond to experimental manipulation in the same way, and so the implications for plant communities, and their interactions with pollinators, are complex to predict,” Stout said. Nevertheless, the general decrease in both the abundance and the number of seeds produced is of concern, she added, “because loss of floral resources in the landscape is already a major driver of pollinator decline.”

The study also found marked changes in the feeding behavior of pollinators in the heated plots. Hoverflies, honeybees, and bumblebees, which were the most abundant insects, visited more flowers, and increased the frequency of their visits to the same flower to collect the nectar and pollen they needed.

“Fewer flowers and less nectar mean less food for pollinators,” Moss said, adding that such conditions may drive competition between pollinators and force them to choose less optimal flowers. “This could reduce their fitness and survival.” 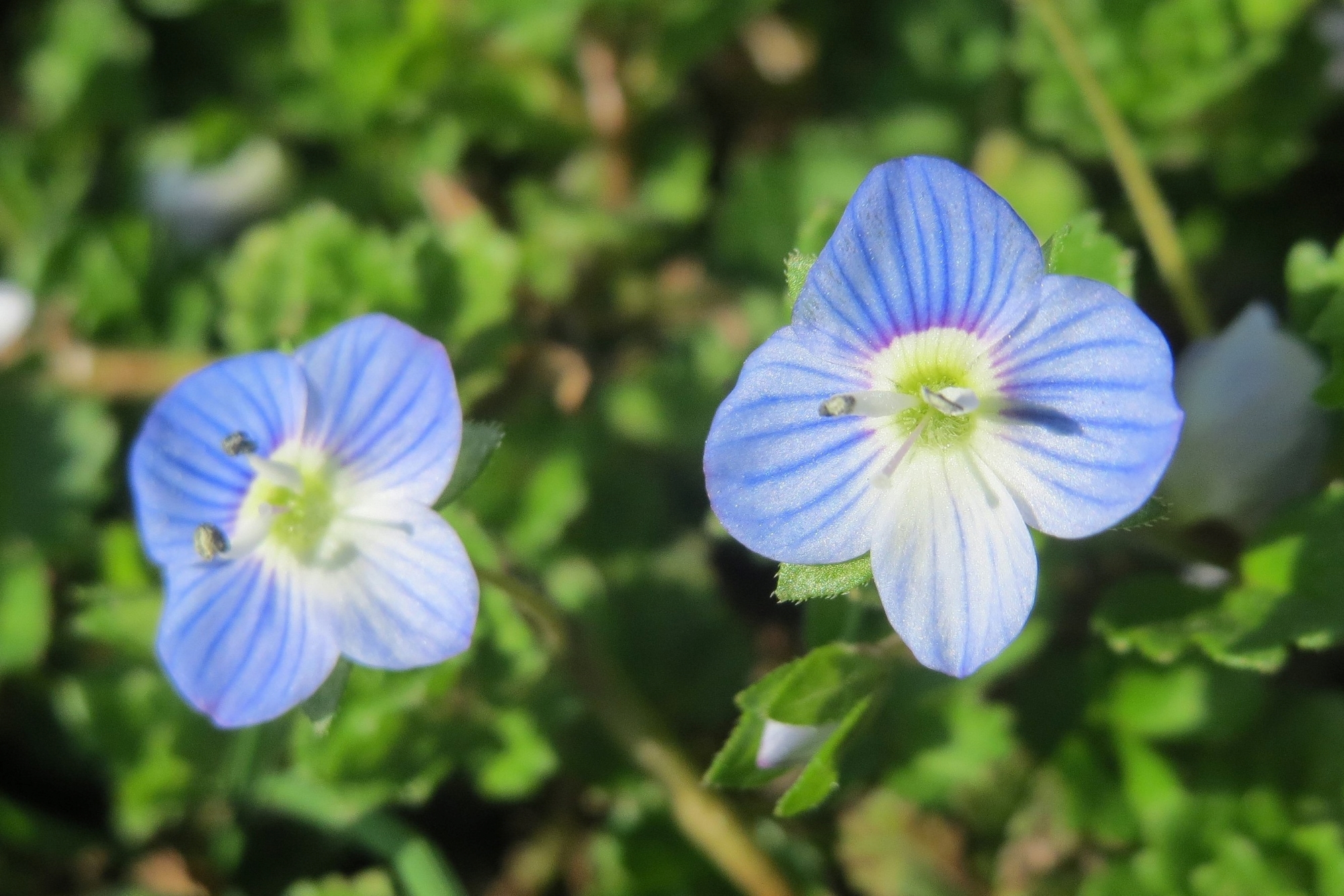 The common field-speedwell, a weed, was the only plant whose seed production performed better in warmer conditions, although it produced much less nectar. Photo credit: AnRo0002 / Wikimedia Commons

A Gloomy Future for the Blooms

Worldwide, two in five plants, including wildflowers, are threatened with extinction due to land-use change for agriculture, housing, and construction. In California, which is experiencing increasingly hotter and drier winters due to climate change, studies have recorded a decline of wildflower species by 15 percent in 15 years. In the UK, human activities have destroyed about 97 percent of wildflower meadows since the 1930s, threatening once commonly seen plants like wild strawberry (Fragaria vesca), harebell (Campanula rotundifolia), and ragged robin (Silene flos-cuculi).

The loss of wildflowers also has a knock-on effect on thousands of insect species, including pollinators like bees and herbivores like aphids, grasshoppers, and caterpillars. It also hits populations of natural pest controllers like spiders, ladybirds, and lacewings that take shelter in the meadows. Studies show that, worldwide, a quarter of known bee species have not been seen since the 1990s, and loss of habitat is one of the primary reasons for the decline.

Tackling climate change by rapidly decreasing emissions would save at least some of the blooms, but in the meantime, there are other steps that could prevent a catastrophic future for wildflowers.

“The main things that will improve ecosystem resilience in the context of wildflowers and pollinators is to improve habitat quantity, quality, and connectivity,” Moss said. “We need to leave more wild spaces for native plants and insects and try to connect these areas up so that these patches of high-quality habitat are not too small or too far apart.”