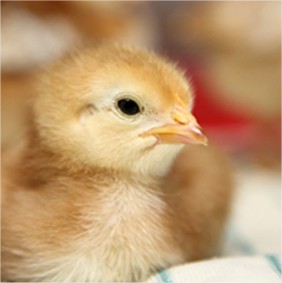 Poultry Eaters do the Funky Chicken While working on a story about extreme dog breeding, our reporter was told over and over again to check out how farm animals—especially chickens—are bred. In a few short weeks, she discovered yet another example of the human capacity for shaping animals to our own dubious ends.

For the first time in recent memory, Americans are consuming more chicken per person than beef. The typical adult now chomps around 60 pounds a year of the birds and the chart below makes the trend clear. If you’re among those visiting the Colonel or other poultry purveyors, your reasons probably have to do either with chicken’s reputation as a healthier source of protein or its lower cost. Indeed, chicken is lower in fat than beef, making it potentially less of a contributor to cardiovascular disease. And some studies have associated chicken with a lowered risk of colon cancer. But not all chickens are created equal—or are equally healthful—as WhoWhatWhy learned from an investigation of how chickens are raised in the United States. Due to a combination of selective breeding and rearing practices, chickens today grow at an absurdly unnatural pace: three to six times faster than they did 60 years ago. The chickens of today are almost Frankenbirds. One farmer put it bluntly: “We’ve successfully bred most chicken out of the chicken.”

Supersized baby chicks on the menu

To understand how much chickens have changed, it is instructive to look back at the early 1900s. In 1925, it took 16 weeks to raise a chicken to 2.5 pounds. Today, chickens weigh double that after just six weeks. According to a study from the University of Arkansas, if humans grew at a similar rate, after just two months, a 6.6-pound newborn baby would weigh 660 pounds.

“Chickens are suffering as a result of genetic breeding,” said Bruce G. Friedrich, senior policy director at Farm Sanctuary, a farm animal protection organization with sanctuaries in New York and California. “They are sent to slaughter when they are about six weeks old, chirping like babies. They have massive upper bodies, and are being genetically bred to grow six times faster.” The reason they are bred with top-heavy bodies is because breast meat is in more demand than dark meat. “Chickens are much fatter and have to be filled with antibiotics [in order] to be kept alive today,” said Friedrich. “It’s true,” agreed Suzanne McMillan, senior director of ASPCA Farm Animal Welfare. Her report on the plight of factory farm chickens explains: “Because of their immense size, many birds cannot support their own weight, are unable to stand or walk, and they can die of dehydration or hunger just inches from food and water.”

These out-sized chickens are often found toppled over, lying in their own waste, with open sores and infections. “These unhealthy conditions could potentially increase the risk of foodborne illnesses like salmonella,” McMillan explained. In fact, a 2010 Consumer Reports analysis of fresh, whole chickens purchased at stores nationwide found that two-thirds harbored salmonella and/or campylobacter, the leading bacterial causes of foodborne disease.

What This Means for Our Health

According to a report from the Natural Resources Defense Council (NRDC), 80 percent of all antibiotics sold in the United States are used on livestock. This has raised alarm in numerous quarters. As the American Medical Association (AMA) noted in a letter to New York Congresswoman Louise Slaughter, “Antibiotics are one of the most useful and important medical advances in recent history. Their effectiveness, however, is being compromised by bacterial resistance, arising in part from excessive use of antibiotics in animal agriculture. The AMA is opposed to the use of antimicrobials at nontherapeutic levels in agriculture or as pesticides or growth promoters.”

Dozens of national and regional health organizations have joined the AMA in the chorus. They all concluded that antibiotic-resistant infections lead to longer illnesses, more and longer hospitalizations, greater side effects from antibiotics, and death when treatments fail.

“Genetics have played a large part in the industrialization of food animal production,” says Will Harris, president of White Oak Pastures in Georgia, a fourth generation farmer/cattleman who tends to the same land that his great-grandfather settled in 1866. After graduating from the University of Georgia’s School of Agriculture in 1976, Harris returned to the farm to work alongside his father. In keeping with the standard methods of the day, they used pesticides, herbicides, hormones, and antibiotics. They also fed their flock a high-carbohydrate diet of corn and soy.

“Those tools did a fantastic job of taking the cost out of the system,” said Harris. “But by the mid-1990s, I became disenchanted with the excesses of these industrialized methods. In 1995, I made the decision to return to the farming methods of my great-grandfather—130 years before.”

His free-range chickens are not cooped up indoors or kept in artificially lit barns, are not fed antibiotics or corn or soy, and live longer before going to slaughter. “In natural conditions, the animals’ health is better, which dramatically lowers the need to use antibiotics,” he says.

Since Harris implemented these changes, he has attracted global attention for his leadership in humane animal husbandry and environmental sustainability.

David Pitman, who runs Mary’s Free Range Chickens in California with his family, has followed Harris’ lead. “I’ve seen how fast-growing chickens suffer,” he said. “A number of farmers are moving away from industrialized farm models. We have seen that raising slower-growing chickens that have room to move and express natural behaviors more easily are healthier than fast-growing chickens.”

Farmers like Harris and Pitman believe that concern about the welfare of farm animals means consumers will pay more at stores knowing they are purchasing animals that are treated humanely. “We are gaining ground,” Harris added. “Consumers are better informed, and retailers are responding in a positive manner.”

Chickens from farms like White Oak Pastures and Mary’s Free Range Chickens are sold at both moderate-price retailers and high-end food stores like Whole Foods. According to McMillan, consumers responded positively when asked if they would pay two or three bucks more for a humanely raised chicken. “You see it with cage-free eggs that are marked on the cartons with ‘vegetarian fed, free-range, and cage-free’ wording on the packaging.”

The words free-range and cage-free can be highly misleading. While the birds aren’t kept in cages, and often have some access to the outdoors, it isn’t exactly Club Chicken. Even in the best of circumstances, tens of thousands of chickens rub feathers, bumping around inside a shed with a single exit leading to a muddy strip soaked in chicken droppings. So How Do You Know What You Are Buying?

“If you are a meat eater, choosing a higher welfare option—pastured-raised for example—means birds are from slower growing breeds, are stronger and healthier, and are ranging on the pasture,” says Leah Garces, US director of Compassion in World Farming, a campaigning and lobbying animal welfare organization. “Pasture-raised animals also have less fat, more omega-3s and antioxidants when compared to conventionally raised animals. A pasture-raised animal when compared to a factory-farmed animal is like comparing an athlete to a couch potato.”

“When people think of not being able to afford this higher-priced meat,” continued Garces, “they are thinking in terms of eating meat every day, sometimes every meal. That’s unnecessary, as shown by the rising number of vegans and vegetarians in this country. Eating less meat, but better quality, is an easy solution for any budget.”

You can, of course, demand that your local supermarket start selling slower growing, better treated chickens, but you may find yourself a chorus of one. If all this concerns you, you may be better off getting involved with two groups working on the issue:  Compassion in World Farming’s website and the ASPCA’s Welfare Conscious Choices’.