When hurricanes batter cities or wildfires force people from their homes, there is often also the danger of a secondary catastrophe: chemicals from damaged facilities being unleashed on an already suffering population.

And, as a result of climate change, that risk keeps increasing for thousands of US facilities that make, use, or store hazardous materials, according to a new government study,

“Natural hazards can lead to disasters that cause multiple and simultaneous releases [of hazardous materials] over extended areas, potentially overwhelming both on- and off-site response capabilities,” says the Government Accountability Office (GAO) study.

Though not all spills of hazardous chemicals end up harming the public or even damaging the facilities that released them, the risks of these incidents are still acute. The study cited the 2014 release of methyl mercaptan within a DuPont insecticide facility in La Porte, TX, which killed four workers, as the deadliest example of recent years.

The investigation identified 3,219 RMP facilities in areas where flooding, storm surges, wildfires, and sea level rises are expected to increase as the impact of climate change worsens. These facilities account for about 31 percent of those with the most potential for public impacts in the case of chemical release.

The RMP facilities analyzed are located in all 50 states, the District of Columbia, and Puerto Rico, but the highest concentration of them — 40 percent — is in the Great Lakes and Midwest regions. The biggest threat to these facilities is flooding, which is also the most common threat to facilities across the country. About 2,900 facilities in total are expected to be impacted by flood risks.

Though a natural disaster has not yet caused  a massive or deadly spill of RMP-regulated chemicals in the United States, there have been close calls — mainly during hurricanes. The study mentions two incidents in which chemicals were released: In 2005, Hurricane Rita caused the Mississippi Phosphates plant in Pascagoula, MS, to release ammonia, which can be an irritant to the skin, eyes, throat, and lungs; and cause death at high enough concentrations. The Mississippi Phosphates Corporation is now a Superfund site, and hurricanes continue to threaten it.

And in 2017, Hurricane Harvey caused accidental releases of numerous chemical compounds at a Chevron Phillips plant in Sweeny, TX, that resulted in “onsite property damage.”

But neither incident is considered to have led to significant impacts on the public, even though the Sweeny facility released at least 170,000 total pounds of chemicals. An Arkema plant in Crosby, TX, also caught fire during Hurricane Harvey, forcing a 1.5-mile evacuation zone to be established around the facility. But, unlike the Chevron Phillips plant, no regulated chemicals were released at the Crosby plant.

The Crosby incident did lead to a high-profile lawsuit against Arkema alleging that the company had failed to prepare for climate change. A judge declared the chemical manufacturer not guilty of “reckless emission of an air contaminant” in October 2020.

But if facilities do not take stronger action to prepare for climate change, GAO doubts they can dodge extreme weather-related chemical releases for much longer.

“Climate change is altering the characteristics of many extreme weather events,” says the study. “Some of these events have already become more frequent, intense, widespread, or of longer duration. Many are expected to continue to worsen.” 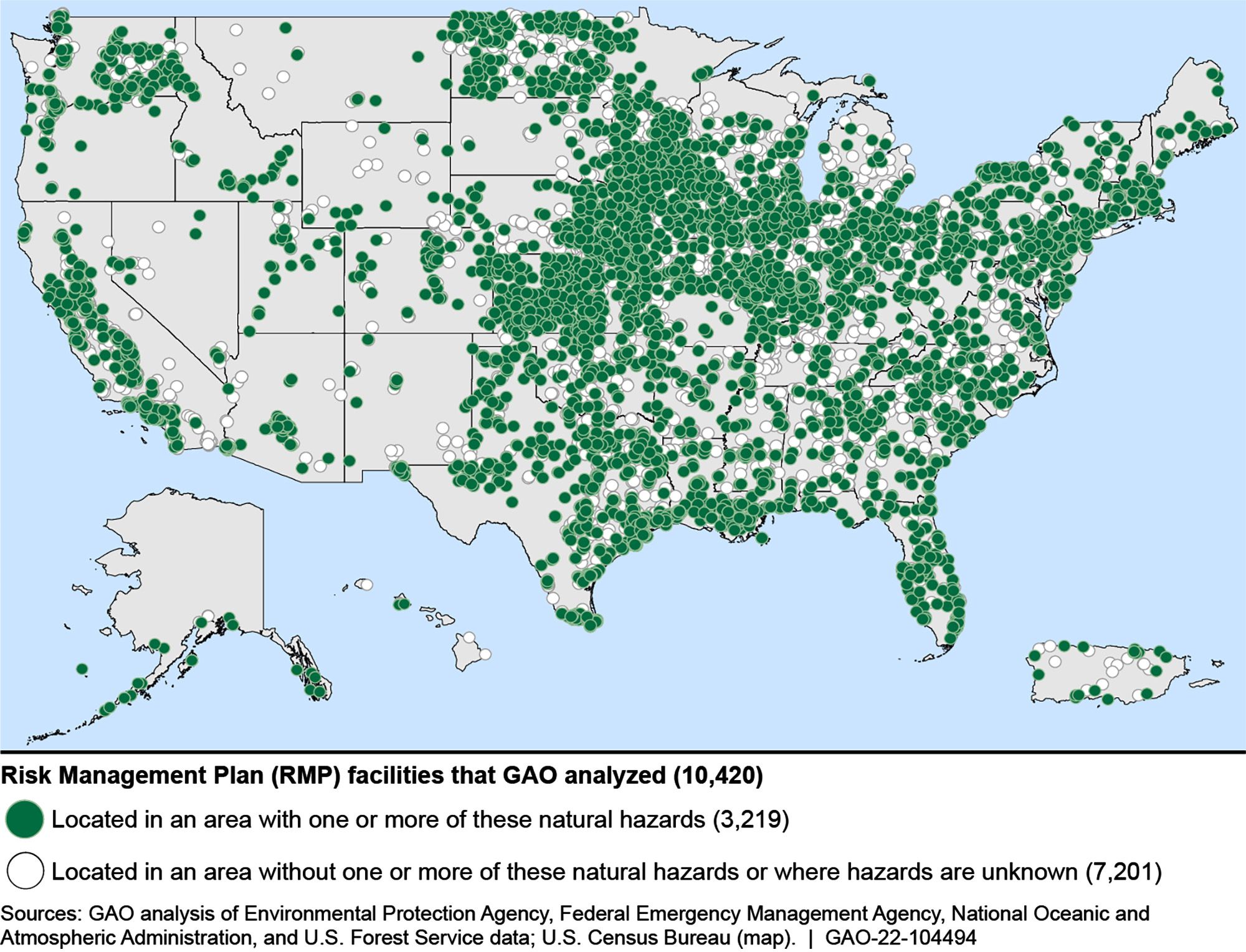 As these hazards become more extreme, RMP facilities face a number of challenges in managing the risks of accidental chemical release. GAO found that many facilities don’t have sufficient information about natural hazard risks or proper direction to incorporate these risks (from the EPA or other guiding bodies). The costs of managing risks are typically high, and smaller facilities often find these challenges even more difficult to manage.

The frequency of EPA inspections at RMP facilities has also declined over the past decade, while natural hazards have been intensifying. In 2012, the EPA was able to inspect 625 facilities, but only 284 in 2019. This is due, in part, to a loss of experienced inspectors.

The RMP inspectors who remain on the job often have insufficient guidance and training, GAO found.

Additionally, when selecting facilities for inspection, the EPA does not take into account which are most threatened by natural hazards or climate change or which are located in communities with high social vulnerability to environmental hazards.

“Social vulnerability considers the social, economic, demographic, and housing characteristics of a community that influence its ability to prepare for, respond to, cope with, recover from, and adapt to environmental hazards,” says the study. GAO analysis determined that communities with high or very high social vulnerability are home to 16 percent of RMP facilities.

GAO issued six recommendations to the EPA as a result of its findings, one of which is to incorporate the relative social vulnerability when choosing facilities to inspect moving forward. The other recommendations center on providing more guidance to RMP facilities and improving inspections.

The EPA generally agreed with all six recommendations and will incorporate them into the current RMP rulemaking process. While the timing of this ongoing process will determine how quickly GAO’s recommendations can be implemented, a new rule is expected to be finalized in August 2023.