Roman Sidortsov (left) and Timothy Scarlett confer over a historical map of a mine site while they discuss the benefits of putting a pumped underground storage hydropower (PUSH) system into one of the decommissioned mineral mines in the Upper Peninsula of Michigan. Photo credit: MTU / EOS
Environment Technology

From the 1800s through the mid-20th century, the Upper Peninsula of Michigan was a mining boon. Copper and iron were removed by the ton. In 1916 alone, miners extracted 267 million pounds (121 million kilograms) of copper from Michigan mines.

There are still more than 2,000 shafts from 800 mines stretching through eight counties, but today, mining has almost ceased in the Upper Peninsula. These mines left a historical legacy as well as a slew of environmental concerns, with many deemed brownfield sites with water quality issues.

These decommissioned mines might find new life in retirement, however—as energy storage sites. In a new report published by the Keweenaw Energy Transition Lab at Michigan Technological University (MTU), researchers looked into the opportunities and barriers for repurposing a decommissioned mine into a pumped underground storage hydropower (PUSH) facility, a variant of the more traditional pumped-storage hydropower facility.

Using a particular mine for a case study, researchers found that a PUSH system could be a profitable and long-lived energy storage and generation facility. Researchers also found that putting PUSH facilities in decommissioned mines had generally positive environmental, economic, and societal implications. Finally, PUSH isn’t just for the mines of Michigan—the team found nearly 1,000 PUSH-suitable sites spanning 15 states.

A PUSH facility is essentially a traditional pumped-storage hydropower system gone underground: A reservoir is placed at or near the surface, water falls to a lower reservoir, and turbomachinery creates power. Water is pumped back to the upper reservoir, and the cycle repeats. 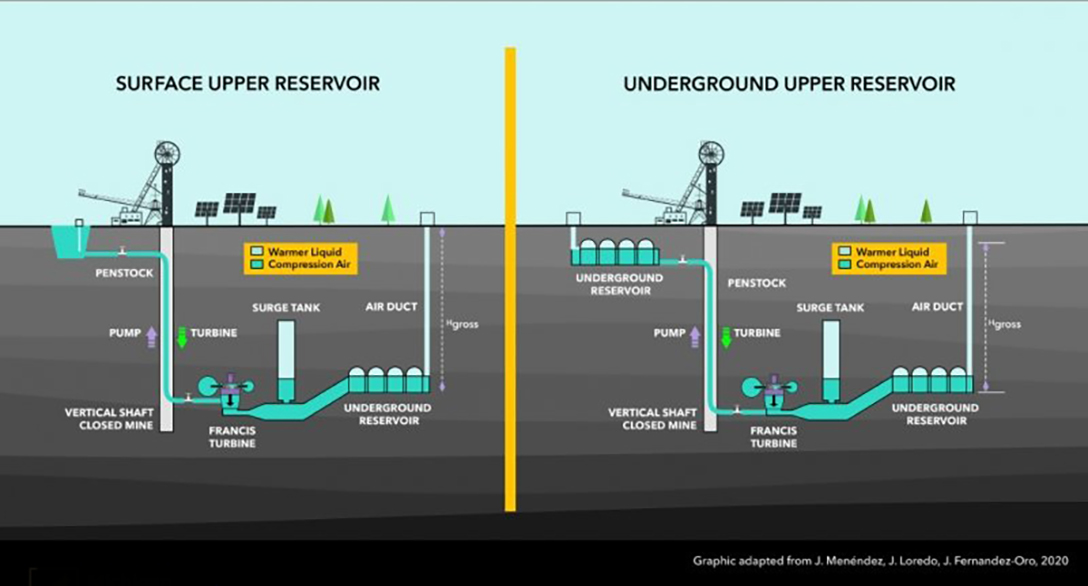 The upper reservoir of a pumped underground storage hydropower (PUSH) system can be installed at the surface reservoir or underground. Photo credit: Menéndez et al. / MTU

Putting pumped-storage hydropower underground isn’t a new idea. But MTU associate professors Roman Sidortsov, an energy policy researcher, and Timothy Scarlett, an industrial archaeologist, wanted to consider a case study for putting PUSH in an existing mine. Sidortsov and Scarlett are coauthors of the report.

Sidortsov, Scarlett, and their team took an interdisciplinary approach, considering what it would take to build a PUSH facility from start to finish. They considered technical, economic, legal, regulatory, water quality, social, and community engagement issues.

Relying on Scarlett’s expertise on the history and archeology of mines in the Keweenaw Peninsula, the Mather B iron mine in Negaunee, MI, was chosen for the case study. The location, geology, and mine configuration seemed to be a good choice for their test.

“We settled on hardrock mines [for PUSH],” Scarlett said. “The geology of coal mines — they’re not really good at big underground open spaces that are being filled and drained with water. They’re not very stable.”

If the energy grid is underpowered or there is a significant blackout, PUSH can come to the rescue. “You essentially turn on the tap, and the lights come on.”

Sidortsov explained that they played it safe with their choices for economic and technology options. “Everything estimated is based on the existing technology, the existing structures — virtually no new work in terms of rebuilding the mine or additional blasting,” he said.

The team was also cautious about revenue predictions. For example, they estimated revenue from only buying and selling electricity on the market but noted that there are other services that could be money-making endeavors. These include the ability to “black start” the energy grid after a power failure. If the energy grid is underpowered or there are significant blackouts, PUSH can come to the rescue. “You essentially turn on the tap, and the lights come on,” said Sidortsov.

PUSH technology could also help balance grid fluctuations and provide energy during a natural disaster — important functions that are not directly monetized.

“These other sources of revenue will ‘sweeten the pot’ for a PUSH developer, depending upon how policy shapes the energy storage and grid services marketplace going forward,” Scarlett noted.

“The study provides an analysis of theoretical power potential across a select number of underground mines,” said Scott DeNeale, a water resources engineer with Oak Ridge National Laboratory. He was not part of the study. However, he continued, “it does not fully consider technical constraints on development, given the national scale of the analysis and data limitations.”

Limiting PUSH technology to metallic mines also overlooks the potential for energy storage at other mine sites, noted DeNeale. “For example, analysis of the Mine Safety and Health Administration mines data shows that of the over 17,000 underground mines canvassed, roughly 84 percent are coal mines.”

Still, “despite some limitations, the study provides a valuable framework for assessing underground pumped storage hydropower development for mine lands,” DeNeale said. “It also appropriately acknowledges data limitations as a key constraint affecting this type of resource potential analysis.”

The PUSH for Clean Energy

The initial goal of the case study was to understand whether building a PUSH system was technically and financially viable, explained Scarlett. But the fringe benefits of installing a PUSH system in a mine are important to the community and the environment.

“These actions we’re talking about with PUSH have an opportunity to help us redress past inequities,” Scarlett said. He noted that former mining communities are economically, ecologically, and demographically vulnerable places after mining shuts down. Giving the mines a new purpose may help revitalize these communities.

Many environmental problems will have to be solved before PUSH energy production begins, researchers noted. “Pumped-storage hydropower deployment on mine lands presents a unique opportunity to capitalize on already-disturbed land that is often not suitable for other forms of land reuse and provides positive post-mining community development opportunities, including energy sector employment,” said DeNeale.

“With PUSH facilities, it’s by design on a brownfield site,” said Sidortsov. The mine sites are an “environmental problem that’s already there,” added Scarlett.

Installation requires addressing not just environmental issues, however. “You’re dealing with a bit of a Frankenstein because it is not just one thing, it’s many things,” Sidortsov noted.

“One of the things about PUSH is that it’s really a choose your own adventure.” — Timothy Scarlett

Issues surrounding a potential PUSH site at Mather B, for example, included environmental concerns associated with mining as well as the rich social and cultural history of the industry in the area. “Many of these mines are older mines. They’re historical… the communities are already cohabitating [with the mines],” said Scarlett.

Ultimately, “one of the things about PUSH is that it’s really a choose your own adventure,” said Scarlett. “Each one of these [facilities] can be different: If you were a giant industrial operation with a big factory campus or if you were the Department of Defense on a big military base and you wanted a secure energy storage system, this is the kind of thing you could build to scale.”

The researchers noted that PUSH has the potential to be a big player in clean energy production and independence. “You don’t need to dig new holes in the ground, you don’t need to go to questionable places or engage in a trade war to leverage the price of critical elements for your batteries,” said Sidortsov. “If you align your energy security policy with decarbonization policy, with your economic development policy, [and] with your environmental policy, PUSH is an awesome solution.”

This story by Sarah Derouin was originally published by Eos and is part of Covering Climate Now, a global journalism collaboration strengthening coverage of the climate story.