Mass extinction lurks beneath the surface of the sea. That was the dire message from a study published in April in the journal Science, which found that continuing to emit greenhouse gases unchecked could trigger a mass die-off of ocean animals that rivals the worst extinction events in Earth’s history.

The findings serve as just the latest reminder that climate change and biodiversity loss are interconnected crises — even if they’re rarely addressed in tandem by policymakers.

Toward that point, the Science study came with a dose of hopeful news: Action to curb greenhouse gas emissions and keep warming below 2 degrees Celsius (35.6 degrees Fahrenheit) could cut that extinction risk by 70 percent.

Additional research published in Global Change Biology offers another encouraging finding. The study — by an international team of scientists — found that not only can we do better at addressing biodiversity issues, we can do it while also targeting climate change.

“Many instances of conservation actions intended to slow, halt, or reverse biodiversity loss can simultaneously slow anthropogenic climate change,” the researchers wrote in the study.

Their work looked at 21 proposed action targets for biodiversity that will be the focus of this fall’s international convening of the Convention on Biological Diversity in Kunming, China — a meeting delayed two years by the COVID-19 pandemic. The researchers found that two-thirds of those biodiversity targets also support climate change mitigation, even though they weren’t explicitly designed for that goal.

The best opportunities to work on these crises together were actions to avoid deforestation and restore degraded ecosystems. Of particular focus, the study found, should be coastal ecosystems such as mangroves, seagrass, and salt marshes, which can store large amounts of carbon and support a diversity of animals. 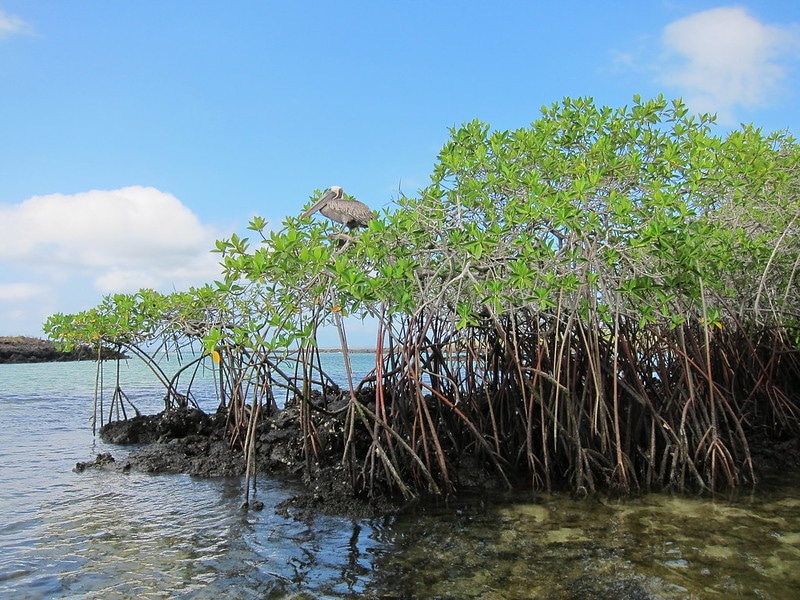 A pelican enjoys a perch in a mangrove stand in the Galapagos. Photo credit: Hans Johnson / The Revelator (CC BY 2.0)

Also important is restoring forests and woodlands, but doing so with native species is critical. Planting monocultures of nonnative trees won’t boost biodiversity, the researchers point out, despite such endeavors being incentivized as a climate change solution.

Another target is reducing runoff into rivers, lakes, and coastal waters from excess nutrients — including nitrogen and phosphorus — that cause algal blooms and oxygen-depleted waters. This eutrophication, combined with warming, may increase greenhouse gas emissions in freshwater bodies, in addition to harming fish and other animals.

Expanding and connecting the network of protected areas is another mutualistic target. Globally, we’ve protected about 15 percent of land and 7 percent of marine habitats. But we need to bump those numbers up considerably. As the researchers behind the Global Change Biology study put it, “There is a substantial overlap of 92 percent between areas that require reversing biodiversity loss and the areas needing protection for enhancing carbon storage and drawdown.”

Working on these issues in tandem can help boost the benefits.

We’re also spending large sums of money in all the wrong places. The study lists the reduction or elimination of subsidies that are harmful to biodiversity and the climate as “one of the most important and urgent reforms.”

And, the researchers say, we need to “mainstream” the issues together — embedding both climate and biodiversity targets and metrics into policy, business, and consumer practices.

Understanding these issues should start early, too. A study of school curricula in 46 countries found that fewer than half addressed climate change, and a paltry one-fifth referenced biodiversity. Both these subjects should be covered more and integrated together, the researchers say.

It’s not possible, after all, to tackle one crisis without addressing the other.

“And climate change is damaging this capacity,” said Hans-Otto Pörtner, a study coauthor and climate researcher at the Alfred Wegener Institute, Helmholtz Centre for Polar and Marine Research. “Only when we succeed in drastically reducing emissions from fossil fuels can nature help us to stabilize the climate.”