The past two weeks saw the Biden administration twist itself into seemingly contradictory positions on oil and gas activities in Alaska when it suspended oil leases in the Arctic National Wildlife Refuge (ANWR) but allowed more drill rigs in the National Petroleum Reserve-Alaska (NPRA). President Joe Biden’s inconsistent treatment of Alaska’s wild lands stokes concern over the impact of his near-term concessions as he walks a political tightrope toward delivering on his long-term climate pledges.

Biden set high expectations for pushing an ambitious climate agenda. On his first day in office, he revoked permits for the Keystone XL pipeline and returned the United States to the Paris Agreement. In his first week, he paused all new leases for oil projects on public lands and waters. His January 20 executive order also asked for immediate review of any Trump-era agency actions that might conflict with Biden’s standards for public health and the environment.

On June 1, Secretary of the Interior Deb Haaland ordered a pause on all activities related to the oil and gas leasing program in ANWR’s coastal plain until her department completes a new environmental review, slated to begin within the next 60 days.

The Trump administration launched the leasing program last August to get at a fraction of the 11 billion barrels of oil beneath the entire refuge, an estimate that is 30 years old. Biden campaigned on protecting ANWR specifically, and on Inauguration Day he ordered the Interior Department to investigate the leasing program’s legality.

Haaland’s investigation identified “multiple legal deficiencies” in the record supporting the leases and pointed out its failure to sufficiently analyze the impacts of oil development on ANWR’s ecology.

Although she did not spell out the legal shortcomings of the leasing program, ongoing lawsuits filed last year by environmental groups alleged that it violated the Wilderness Act, the Endangered Species Act, and the National Environmental Policy Act, among other laws considered vital to protect wildlife, waters, and people on public lands. The suits also claimed that the original review ignored the effects of extracted and burned fossil fuels on the climate. 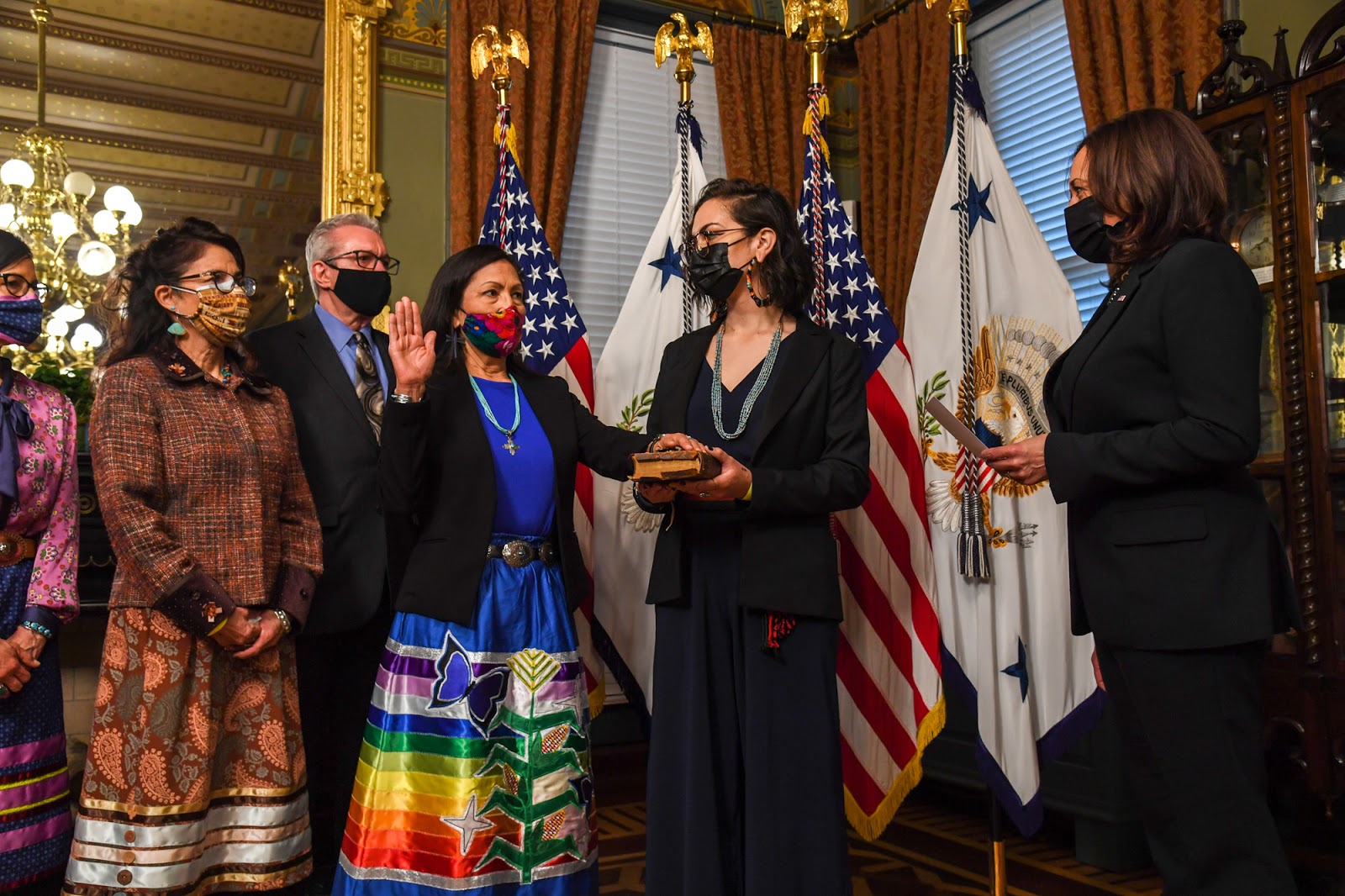 Conservation and Indigenous groups praised Biden and Haaland’s action but remained mindful of the struggle to repeal the leasing program in its entirety and nullify leases outright.

“We still have a lot of work to do, so we ask for continued prayers and [that you] remember we are here and we stand with you on saving one of the last untouched ecosystems in the world,” said Bernadette Demientieff, executive director of the Gwich’in Steering Committee, formed in 1988 in response to proposals to drill in the coastal plain.

Alaska Gov. Mike Dunleavy (R) called Haaland’s order an “egregious federal overreach” and contended that oil companies in the Arctic follow “stricter environmental standards than anywhere else in the world.”

Sen. Lisa Murkowski (R-AK) criticized the administration for suspending the leases, pointing out that they were lawfully issued pursuant to the 2017 Tax Cuts and Jobs Act. That act contained a rider fashioned in large part by Murkowski requiring at least one lease sale for tracts in the coastal plain before 2024 and another sale before 2027.

The auction, held two weeks before Trump left office, brought only two competitive bidders. Knik Arm Services and Regenerate Alaska purchased one tract each, whereas the vast majority of land, close to half a million acres, went to the state-owned Alaska Investment Development and Export Authority for the bare minimum bid price of $25 per acre.

Total sales netted $14.4 million, far less than the $1.8 billion oil advocates had projected. The lukewarm turnout resulted from low oil prices and intense public backlash leading up to the auction, combined with the refusal of major banks to fund oil and gas development in ANWR.

The Biden administration’s opposition to drilling in ANWR contrasts with its decision earlier last month to support other oil projects.

On May 3, the Department of Justice (DOJ) decided against shutting down the 1,200-mile-long Dakota Access pipeline, which is undergoing a court-ordered review to assess its safety. Days later, the DOJ defended Trump-era leases to drill on more than 500 square miles of Wyoming that are sensitive sage-grouse habitat. And two weeks ago, the DOJ testified in favor of ConocoPhillips’s Willow project, in the 23-million-acre NPRA, which already hosts several long-standing oil projects.

Willow would feature five drill sites with up to 50 wells per site, connected to a central processing facility by hundreds of miles of pipeline and an even more extensive road network, complete with two airstrips and gravel mines. Once up and running, as early as 2024, ConocoPhillips expects the wells to produce up to 160,000 barrels of oil per day over a lifespan of 30 years. The project had been in the works since 2017 and received its final road permits on the morning of Trump’s last day in office.

Currently, however, Willow is held up in Alaska’s District Court. Several environmental groups sued the Trump administration soon after it greenlighted the project last October, alleging a flawed environmental review process and asking for the project to be shut down. Further motions and appeals sought to halt winter construction until the underlying lawsuit had made its way through court, and in an emergency action this February, the 9th Circuit Court of Appeals barred ConocoPhillips from digging a gravel mine and laying roads until further court action.

Despite its name, the vast NPRA remains largely wild, with oil projects concentrated in a small corner. The region offers habitat to caribou and subsistence value to Native Americans, and its Teshekpuk Lake is a hotbed of ecological activity that draws millions of migratory waterfowl and shorebirds. Willow would continue the slow spread of oil rigs in the east of the petroleum reserve that started when the region’s first project, Colville-Delta 5, went online in 2015.

“It ought to be getting more attention,” said Erik Grafe, deputy managing attorney at the Alaska office of Earthjustice, one of the groups litigating to cancel Willow. “It’s an area that needs to be protected for its own sake, and allowing a massive oil project there is going to do damage to the region and damage to the climate that we can’t afford.”

The DOJ’s brief rejected the plaintiffs’ allegations. Although Haaland had opposed Willow during her tenure in Congress, she seconded the administration’s support in a call to Murkowski and the rest of Alaska’s congressional delegation.

“That’s a misstep and hopefully does not represent the ultimate decision,” said Grafe. “It’s really disappointing and inconsistent with the president’s commitment to address climate change and the recognition that doing so means not extending oil and gas development on public land.” 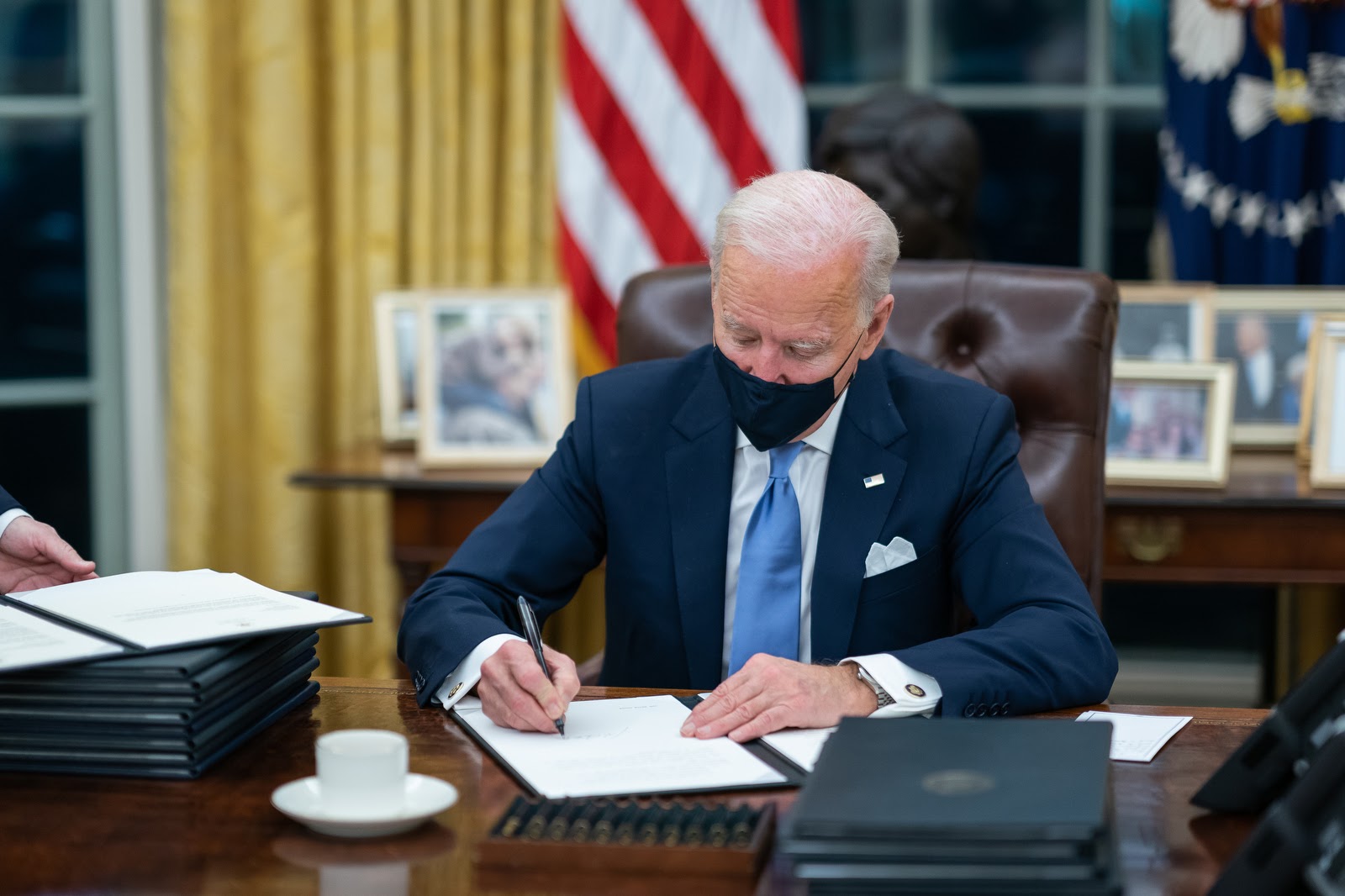 Among the executive orders President Joe Biden signed on Inauguration Day was one asking for immediate review of any Trump-era agency actions that might conflict with Biden’s standards for public health and the environment. Photo credit: The White House / Flickr (U.S. Government Work)

Although the DOJ’s stance seems to conflict with the administration’s stated commitment to environmental stewardship, some legal experts deem its actions necessary to preserve the authority that agencies such as the Department of the Interior wield over the environmental review process. Incoming administrations often stay the course of their predecessors, trying to avoid a flip-flop spectacle in court that would bypass well-established agency procedures.

“They’re weighing: Is this the hill we want to die on or are we going to be sacrificing something that could damage our institutional capacity over the long term,” said Hannah Perls, legal fellow at Harvard’s Environmental and Energy Law Program. “The Biden DOJ has to work with what they inherited: regulations, records, and briefs developed under the Trump administration. They have to decide, is it worth it in this moment to do a 180 and make a weaker argument that could lead a federal court to make a decision about not just the Willow project but how much respect agency expertise deserves.”

Biden will have to rely on the weight of agency expertise to solidify his own climate agenda down the line and weather potential attacks from industry in court. The DOJ brief supporting Willow quietly acknowledged this reality: It asked the court to allow the responsible agencies to fix any potential errors in the program’s underlying record, thus going through proper agency-set channels instead of canceling the project outright with a swing of the gavel.

“The DOJ is likely being cautious because there are so many new judges that are skeptical of executive authority and the administrative state,” said Perls, who added that more than a quarter of currently sitting federal judges are Trump appointees. “You don’t want to bait the courts.”

There’s less risk of weakening agency authority in the case of ANWR because it benefits from special protections under the Alaska National Interest Land Conservation Act that more obviously call the leasing program’s legality into question. Those protections don’t extend to the NPRA, which lends Willow a stronger legal footing. 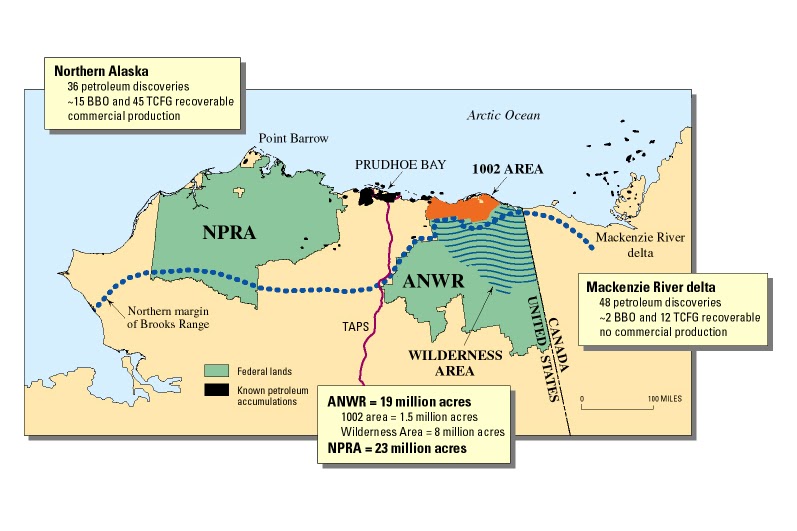 Alaska’s Arctic National Wildlife Refuge (ANWR) and National Petroleum Reserve-Alaska (NPRA) both host polar bears, migratory birds, and caribou herds vital to Alaska Natives. But they differ in one major respect: Decades ago, ANWR received special protections that the oil industry has found hard to crack, while its neighbor to the west was always intended as an oil reserve. Photo credit: USGS

Willow is also in a more advanced planning stage. Its lease sale was settled more than three years ago, and ConocoPhillips now has more skin in the game than any of the ANWR leaseholders. Accordingly, Alaska’s delegation has long made Willow a top priority. Murkowski in particular grilled Haaland during her confirmation hearing on whether she would act as an “impartial arbiter of permitting decisions” and “allow the Willow project to proceed without additional changes or environmental review” beyond that which had already been settled legally according to Obama-era standards.

Murkowski’s ultimate vote in favor of Haaland won her the confirmation by a razor-thin majority. With each chamber of Congress split almost exactly in half between Republicans and Democrats, even a single Republican vote is an important bargaining chip in Biden’s long-term climate plans.

At the same time, Perls points out, the DOJ’s ability to navigate any of the legal challenges has been muddled by the previous administration’s unprecedented regulatory behavior. “The Trump administration really went into legal no-man’s-land, and so there’s a lot of unanswered questions,” she said. “They interpreted statutes in completely new ways that dramatically changed the authority that agencies could exercise. Those reinterpretations were in service of a broader deregulatory agenda.”

Instead of taking a contrarian stance that risks setting an unfriendly precedent in court, the Biden administration just might be biding its time until it can deliver its best shot: Oil development projects often need permits issued over the course of their lifetime, and the permitting process could offer a safer opportunity for government agencies to delay or shut down operations.

“I think it’s a wait-and-see game,” said Perls, “because a lot of the individual pieces that we’re seeing now, whether it’s Dakota Access, or it’s the leases in Wyoming, or it’s the Willow project — these are building blocks in a longer permitting process.”