A Paradise, CA, residence is engulfed by the Camp Fire on November 8, 2018. The following year, the town passed a law requiring “defensible space” — a border of cleared land — around each building. Photo credit: NIST
Environment

On the day Ruby Reid lost her home in Talent, OR, to the Almeda Fire in 2020, she got no official warning to evacuate — only her instinct told her she should.

“It was a really hot, windy, horrible day, and it was raining ash,” Reid remembered. “I’d already been packing up my stuff.”

The mini-farm that had fueled the growth of a small business she started with her fiancé ended up fueling the wildfire. Less than a year later, another fire destroyed the property in Bonanza, OR, where she kept an apiary, taking with it all 13 of her beehives, beekeeping equipment, greenhouses, and a storage shed.

“After the Almeda Fire, we decided we can’t stand the risk and fear of living in a place that could burn down any minute,” Reid said, noting that she and her fiancé already had plans to move to the east coast, where they both have family. “A lot of the things we love about it here are now really scary. A lot of beautiful things are now terrifying.”

Fast forward to 2021, and much of the West is already in the throes of a fire season that started early due to severe drought and a record-breaking heatwave that has caused temperatures in some cities to climb above 115 degrees. As of June 28, the Willow Fire had burned nearly 3,000 acres in Big Sur and had only recently been mostly contained. The entire village of Lytton in British Columbia burned on Friday after experiencing days of the hottest temperatures recorded in Canadian history.

But the West isn’t the only region affected, and fire isn’t the only threat. Across the US, houses, businesses, and other structures are increasingly at risk from stronger and more frequent natural disasters.

Updating building codes to mitigate disaster is one step toward weathering the impacts of climate change — a step that is sometimes overlooked in the effort to reduce those impacts by lowering carbon emissions. 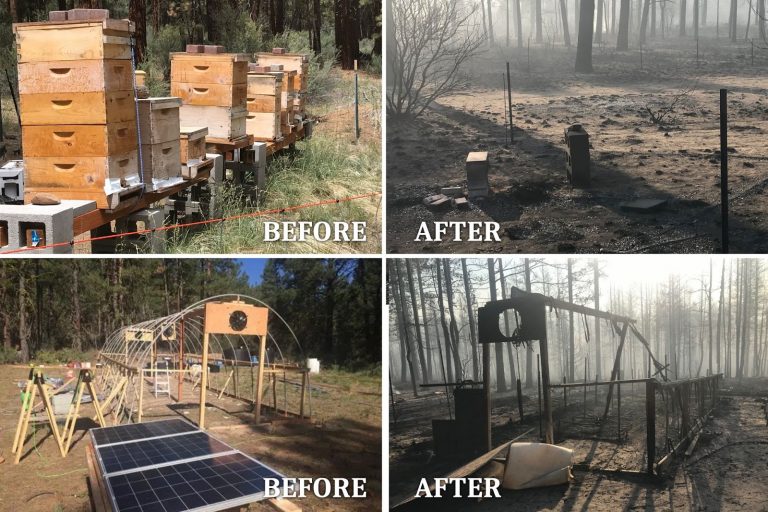 Ruby Reid, owner of Valhalla Organics, lost 13 beehives (top) and a greenhouse under construction (bottom) to wildfires in Bonanza, OR, this month after losing her home and mini-farm in Talent, OR, to a different wildfire last year. Photo credit: Courtesy of Ruby Reid

Disaster mitigation measures aim to ensure that buildings and the communities housing them can reduce the impact of a natural disaster and rebound as quickly as possible. They’re seen as a financial investment: It’s more cost-effective to make buildings stronger than to rebuild completely every time disaster strikes.

The National Institute for Building Sciences found in its 2019 Mitigation Saves report that adopting model building codes developed by the International Code Council (they’re known as I-Codes) saves communities $11 in disaster repair and recovery per dollar spent implementing the measures proposed in the report.

“The beginning of a good disaster mitigation plan begins with the building codes,” said Sara Yerkes, the senior vice president of government relations at the International Code Council. “The involvement of the stakeholders and the constituents is critical.”

What it means to “build for disaster” changes with the location and the type of disaster faced. The 2019 Mitigation Saves Report examined riverine and coastal flooding, hurricanes, earthquakes, and fires at the wildland-urban interface.

Examples of mitigation include adding steel beams to strengthen the first floors of buildings in earthquake-prone areas and raising the foundation of houses in flood zones.

Yerkes said the I-Codes, updated every three years, are meant to be a flexible baseline. Jurisdictions, whether state, county, or local, can go beyond the codes and require more stringent measures.

“It’s best to follow the guidelines as much as possible, because they’re rooted in the best science, but it’s also important to recognize that local context matters,” said Rebecca Miller, who earned a doctorate in environment and resources at Stanford University, where her work focused on wildfire mitigation policies in California. “The codes are designed to keep communities and homes safer,” Miller said. 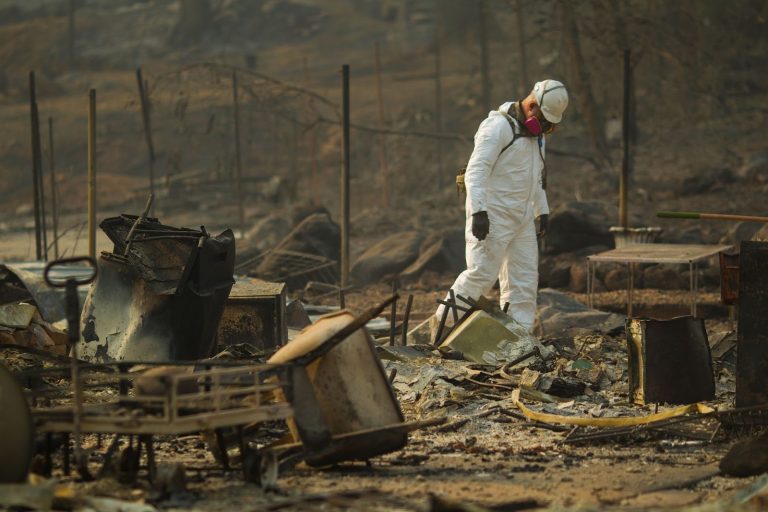 A 2020 Federal Emergency Management Agency report estimated that if all new buildings in the US were built to modern I-Codes, building owners and state and county governments would save $600 billion in prevented cumulative disaster repair and recovery costs by 2060. Despite the strong cost-benefit evidence for adopting modern building codes nationwide, the same study found that 65 percent of counties, towns, and cities across the country have not yet adopted modern building codes.

The situation in California, where the Camp Fire killed 85 people and destroyed almost 19,000 structures when it roared through Butte County in 2018, illustrates some of the challenges to adopting disaster mitigation codes and ordinances. One is the cost of bringing existing houses up to new standards.

“We essentially know how to keep a house from catching on fire, and we understand that the way we build homes determines the likelihood of them catching,” Miller said. “Actually retrofitting homes to the better standards can be extraordinarily expensive.”

Although most building codes dictate standards for new construction, older construction does not have to comply, which can leave large neighborhoods susceptible to disaster unless most residents comply voluntarily, Miller explained. Especially with wildfires, the resilience of an individual home depends on those around it, so Miller urged that communities strive for “herd immunity.”

A report by Headwater Economics, an independent, nonprofit research group, found that a new home built to wildfire-resistant codes can be constructed for roughly the same cost as one without those benefits. Bringing an existing home up to code, however, is far more expensive because of demolition costs. Retrofitting a roof and exterior walls, the report noted, can cost as much as $62,000.

For pricey retrofits, Miller said, federal and state governments need to step in with grants and other forms of financial aid.

Kimiko Barrett, the lead wildfires researcher and policy analyst at Headwater Economics, agrees on the need for government subsidies, especially for homeowners who can’t afford mitigation. “Some of these codes are assuming a socioeconomically homogeneous type of homeowner that can afford to build in a wildfire area,” Barrett said. “While that may be true in some places, it’s not true across the board.”

“When it comes to wildfire risks, the federal government is going to continue to focus on forest management and resilient landscapes,” Barrett added, “but local communities are ultimately going to be the ones responsible for taking the steps necessary to reduce risks to homes.”

States and towns can start with basic, relatively inexpensive mitigation measures such as creating “defensible space” — a buffer between a building and surrounding land. As of this year, California’s building code requires all homes, existing and new, in areas surrounded by flammable terrain to maintain defensible space. Some towns and counties had already adopted a similar ordinance.

The idea is to clear a border of at least 100 feet around a vulnerable home of anything that could ignite and spread fire to the house. Maintaining defensible space is relatively cheap and does not require a permit. 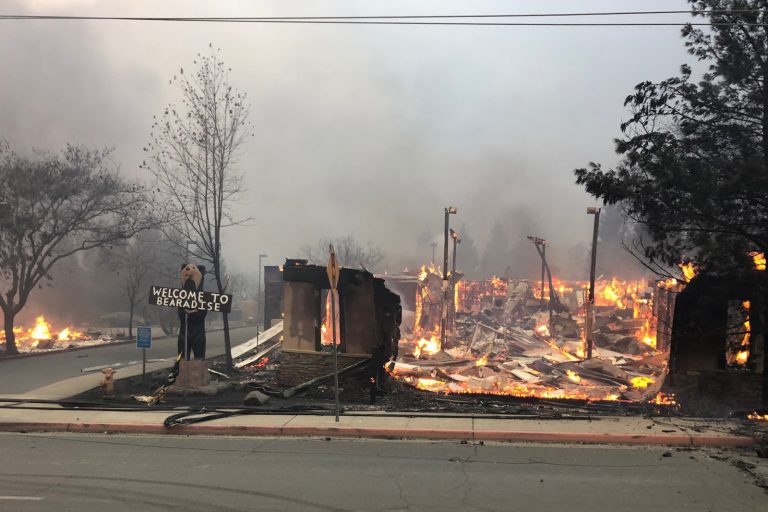 “Fire ordinances and anything that makes us more fire-safe — I mean it’s an immediate yes, we’re going to pass it,” said Steve Crowder, mayor of Paradise, CA, which was hit especially hard by the Camp Fire.

Paradise usually gets about 60 percent compliance with the defensible space ordinance it adopted in 2019, Crowder said. The town mails a reminder at the beginning of fire season, and the California Department of Forestry and Fire Protection (CAL FIRE) branch in Paradise does free inspections of every parcel to help homeowners understand whether they’re compliant and where to make changes if they’re not. It issues corrective notices for parcels out of compliance.

The Butte County Fire Safe Council, a nonprofit community organization dedicated to education and assisting in wildfire preparedness, provides a free chipping service for cleared tree branches and brush. Paradise recently allowed goats and sheep within the town limits, to accommodate a new program in which residents can rent goats to graze away brush in their defensible space.

“The requirement is just common sense,” said Bill Connelly, supervisor for Butte County District One and chairman of the board. “If you live in a fire-prone area, you’ve got to keep your place clean.”

Butte County is phasing in the defensible space ordinance with one year of education, though residents subject to town ordinances have already had to comply. The system is complaint-driven, encouraging neighbors to hold each other accountable for any shared or overlapping defensible space. Free or low-interest loans are available for people who can’t afford to keep their land up to code. Those are sometimes forgiven when residents move away, Connelly said.

The focus on individual homeowner responsibility is relatively new, and follows about 60 years of emphasis on forest management — culling deadwood and creating fire breaks, for example. 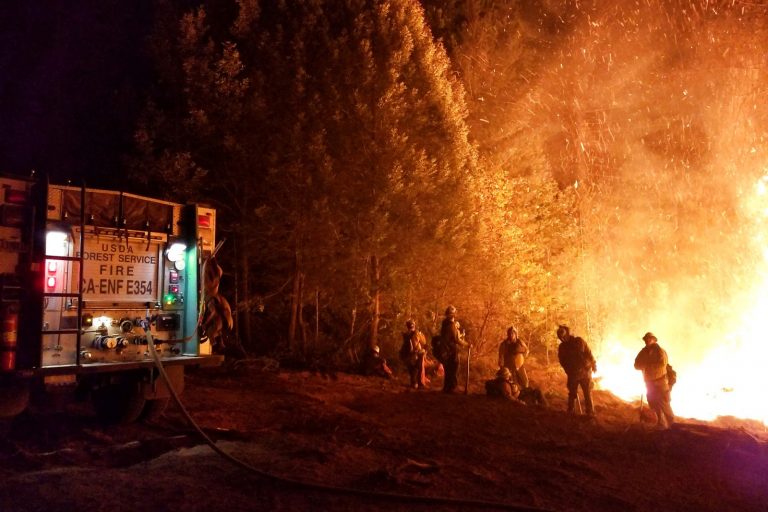 Researchers have known about the science of home ignition (how a home burns down) and the factors leading to a wildfire disaster for more than 30 years, Barrett pointed out, but the delay in adopting policies addressing home and property mitigation comes partly from an archaic belief that forest management is the only answer to wildfire prevention.

“[Policymakers] generally recognize that wildfires are a problem, but they’re inculcated in this idea that the source and therefore the solution is purely in forest management,” Barrett said. “It shifts responsibility away from the individual homeowner to the federal government, and that’s often more palatable from a political standpoint.”

Emphasis on personal responsibility is necessary, Miller said, though it may be difficult. “Telling people their house is going to burn down and they need to be prepared [is] a lot scarier than a prescribed burn dozens of miles away.”

If Reid’s experience is any indication, homeowners owe it to themselves to take protection into their own hands. During her time in Talent, Reid said, the Jackson County Board of Commissioners was not proactive during the lead up to wildfires or in their aftermath. Of the roughly 200 people she knows who lost homes to wildfires, she said, none received official warning or evacuation orders.

But even voluntary homeowner compliance is not enough anymore, Barrett said. Mitigation measures that effectively reduce risk to the broader community have to be “compelled by policy,” because one homeowner cannot reduce community risk if his or her neighbor does nothing.

Barrett, who is based in Montana, noted that outside California, policymakers in Western states struggle with anti-regulatory sentiment that makes it hard to adopt modern codes.

But attitudes may be changing. Both Connelly and Crowder said that their constituents, most of whom have lived through at least two major fires, are starting to accept the shifting responsibility for wildfire mitigation and to acknowledge that wildfires are inevitable.

“We seem to be in a year-round fire season,” Crowder said. “Fire safety right now is at the forefront of everyone’s mind.”