An Indigenous Community in India Offers Lessons in Climate Resilience

This story by Sahana Ghosh originally appeared in Mongabay and is republished here as part of Covering Climate Now, a global journalism collaboration strengthening coverage of the climate story.

In the village of Nongtraw in India’s northeastern state of Meghalaya, one of the world’s wettest regions, honey is a sought-after resource by the Khasi Indigenous community. They go into the forests to collect it. Once they reach a beehive, they introduce themselves to the bees, “informing the bees” that they will only take what is required. This legacy of respect for local agrobiodiversity by not disrupting the ecological balance has stood the Khasi community of Nongtraw in good stead when it comes to climate change-linked food stress, underscores a United Nations report.

The UN’s Food and Agricultural Organisation (FAO) report on Indigenous People’s Food Systems co-published by FAO, the Alliance of Bioversity International, and the International Center for Tropical Agriculture (CIAT) includes the profiles of eight Indigenous People’s food systems from around the world, including Uttarakhand and Meghalaya in India.

Nongtraw lies along the mid-slope of a deep gorge in the Cherrapunji region, a highly dissected plateau along the southern margins of the Meghalaya Plateau. Satellite images of the Cherrapunji watershed, which receives record rainfall, reveal rocky outcrops on what appears to be a barren tableland with thin soil cover. But pan more, and there is a sudden green plunge: secondary forests of shifting cultivation hugging the steep slopes of the canyons and winding gorges. Jhum is the primary food production system in the community, involving two distinct land uses — agriculture and fallow forestry — that alternate in sequence and time on the same plot of land.

“I thought the canyons were very green because it is challenging for the people to do anything out there, so they remained untouched. But when I did my research (on shifting cultivation), I found that the practice of shifting cultivation is still strong in these watersheds,” notes Bhogtoram Mawroh, one of the authors of the report and a member of the Khasi community. 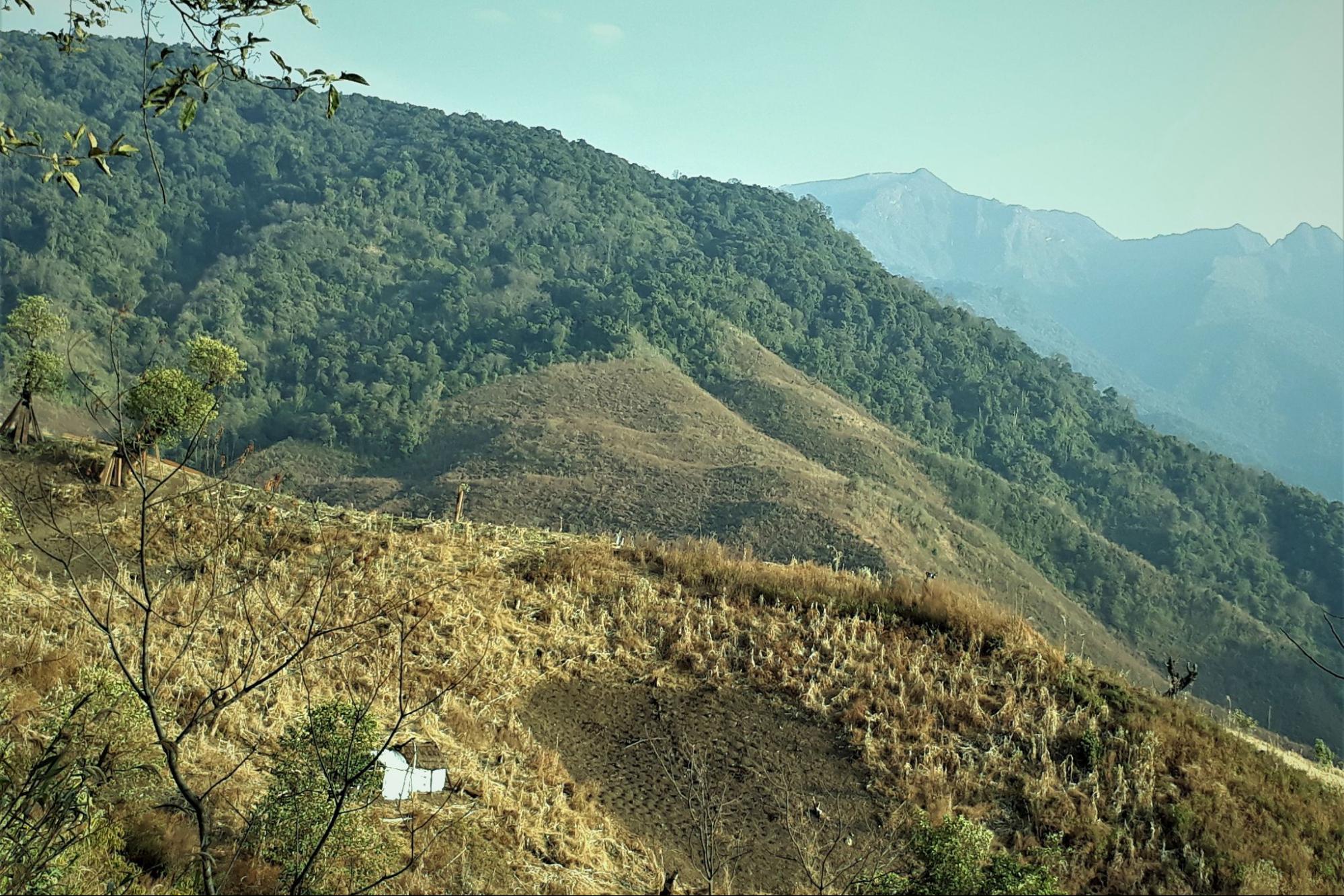 The Khasis repose confidence in the resilience of their food system sustained by the robust self-governance of their community. However, factors such as the shift to cash crops (broom grass and oil palm), the impact of India’s public distribution system on the local subsistence system, and over-reliance on market-based products dent their resilience.

“When the dependence on the local landscape becomes limited, and food items are now sourced from outside the community supported by government policies, agrobiodiversity goes down, and the ecological knowledge system which gives resilience to the food system is also lost. Then monoculture of cash crops becomes more dominant, which further brings down resilience,” says Mawroh, senior associate at the Meghalaya-based North East Slow Food and Agrobiodiversity Society (NESFAS).

Based on factors such as socio-economic, demographic, and health status; the sensitivity of agricultural production; forest-dependent livelihoods; and access to information services and infrastructure, a recent government study of 12 states in the Indian Himalayan Region and their vulnerability to climate change found that other Indian states — Assam and Mizoram, followed by Jammu and Kashmir, Manipur, Meghalaya and West Bengal, Nagaland, Himachal Pradesh and Tripura, Arunachal Pradesh and Uttarakhand — had high vulnerabilities.

Community nutrition researcher Suparna Ghosh-Jerath, who studies links between agro-biodiversity, hidden hunger, and rural Indigenous communities such as the Sauria Paharias, a particularly vulnerable tribal group of Jharkhand, adds that what was learned in historical times — what grows where — may be helpful and lead to climate-friendly agricultural practices.

“What we have to examine now is how climate-resilient they are,” said Ghosh-Jerath, a professor at the Indian Institute of Public Health, New Delhi. She is not associated with the FAO report.

Research priorities on Indigenous food systems should include systematic documentation of a wide variety of Indigenous foods known to the Indigenous communities (their taxonomic classification, seasonal availability, their nutritive value, their current use within the communities) and their contribution to food security and dietary diversity.

“Studies should explore what dictates food habits, what are the factors that facilitate or are barriers to consumption of Indigenous foods, what should be the behavior change communication strategies to ensure the community places faith in their food systems and values it. We should, however, be cognizant that this traditional knowledge is co-produced with the Indigenous communities so that they get due recognition, acknowledgment, and ownership over their traditional knowledge,” Ghosh-Jerath told Mongabay-India.

More than 7,500 km (4,660 mi) away in Glasgow, Scotland, Indigenous practices were under the spotlight at the COP 26 this November, the United Nations climate summit, where Indigenous leaders worldwide highlighted a bouquet of climate mitigation and adaptation practices informed by Indigenous and local knowledge. According to the IPCC’s latest Global Assessment, these practices “can accelerate wide-scale behavior changes consistent with adapting to and limiting global warming to 1.5°C.” 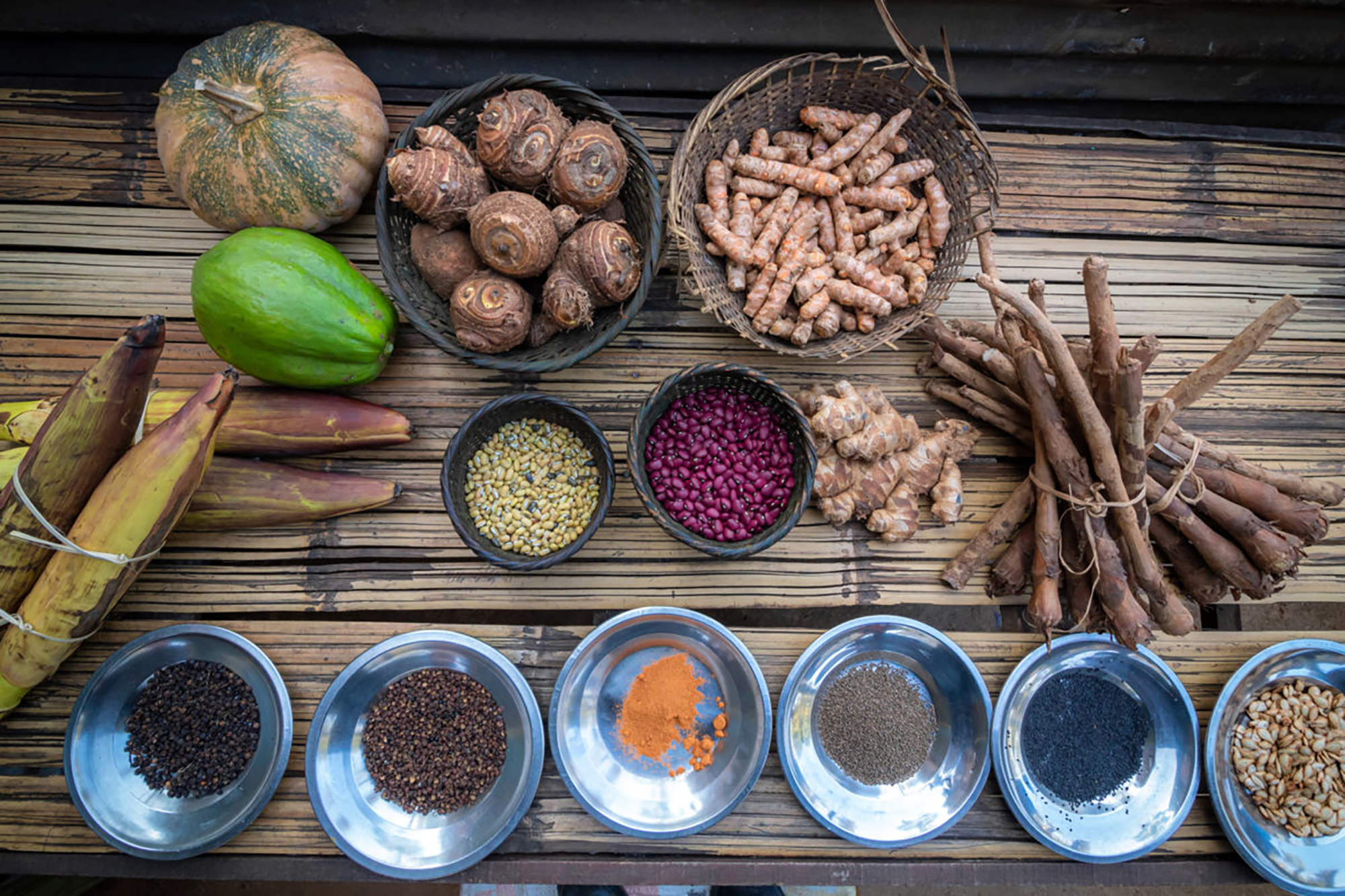 Nongtraw sits in an important center of crop origin and diversity, and the domestication of local plants is ongoing. The report emphasizes that wild fruits of yesterday are the domesticated fruits of today, referring to edibles such as the mandarin orange. Some crops grown in the community were introduced centuries ago and are considered traditional because of their long histories in the region, such as millet, rice bean, maize, cassava, sweet potato, and potato.

As many as 63 species of plants, including cereals, legumes, roots and tubers, vegetables, fruits, nuts and seeds, and other edible species, are grown in jhum fields or kitchen gardens. Many of the crops grown by the community have multiple varieties.

For example, jhum agriculture yields a bounty of 12 potato varieties, seven cocoyam varieties, and seven sweet potato varieties. “We get our medicines from the food we grow. During COVID-19 lockdown, which saw market chain disruptions, we were able to access quality food because we traditionally rely on our local agrobiodiversity for food production,” Didiana Ranee from Nongtraw told Mongabay-India.

The community uses no external inputs, especially synthetic chemicals, for food production, notes Mawroh quoting the report. “Under the jhum system, the only input used is the ash which comes from burning the biomass which has been felled when clearing the land for cultivation.”

The local governance oversees the food production system, ensuring that the landscape is healthy and strengthening the food system’s resilience. The Durbar Shnong (village council) is the most critical institution in the community governing natural resources and making rules and regulations for protecting and preserving the forest and other natural areas within the local landscape.

“For instance, soil and aspect of the land determine farming. The higher reaches are not disturbed since they hold the source of water for the community,” Mawroh adds. Aiding the work of the village council is the village development committee. Its most important function is to obtain land for cultivation. The rules and regulations it sets for harvesting natural products from the community land are intended to prevent a future shortage of land for growing food. 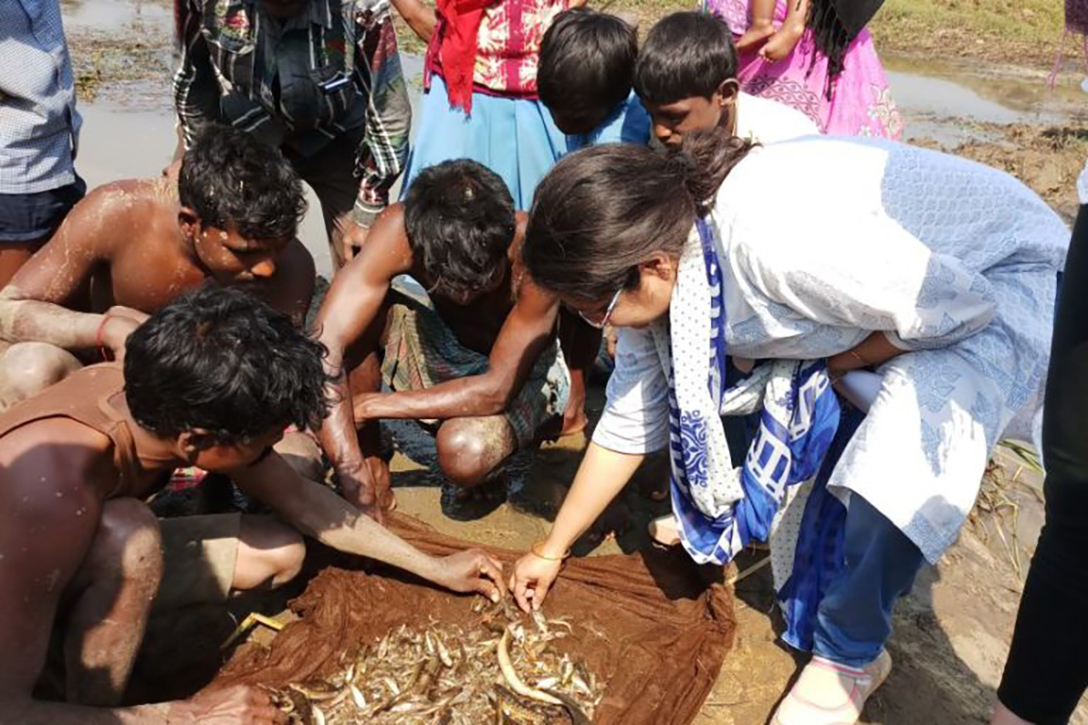 The Sauria Paharias of Jharkhand rely on forests and water bodies for their food. Photo credit: Suparna Ghosh-Jerath / Mongabay

Including Knowledge on Local Agrobiodiversity in Policies

Until the mid-90s, the community in Nongtraw relied on locally produced grains, vegetables, and tuber crops, including staples sweet potato, millet, and cocoyams for consumption supplemented by plants and animals from the forest. “Millet is our rice,” points out Pascal Ranee of Nongtraw.

However, with the introduction of the Public Distribution System in the 1980s coupled with increasing incomes and market access, rice became ubiquitous in the diet and is now the most important food of the community, supplanting millet and other grain crops like Job’s tears.

“Food from the market has indeed become more important for the community’s diet as is the case in many parts of the world. Now, almost half of the diet comes from the market. It has benefits, especially during the lean season when crops are yet to be harvested and there is a high dependence on forest food. The community has accepted the convenience of the market. The important point to remember, though, is that there are local substitutes available for the market-sourced food, but this is something which is not well recognized,” said Mawroh.

Parallelly, the cultivation of cash crops such as broom allowed farmers to improve their economic status, the sign of which is the replacement of the thatched roof with that of tin. But farming broom led to the depletion of water resources and degradation of soil. The report also mentions that since 2016, the government has intervened in the Khasi community of Nongtraw, restricting jhum and requiring a written document from the government for land transactions within the community.

Much like the Khasis in Nongtraw, the Sauria Paharias of Jharkhand, a particularly vulnerable tribal group, who practice Kurwa farming (a form of shifting agriculture in forests, along with farming in agricultural lands) have switched to growing rice in place of drought-resistant millets due to agricultural interventions which mainly focused on yields.

“Under the traditional system, they accessed natural food sources such as forests and waterbodies. Through their Indigenous knowledge that was acquired from experiential learning from ancestors, they understood these foods are edible and had certain properties and promoted them within their culture. They knew what to grow and where to grow them in accordance with the local climate,” Ghosh-Jerath explained.

The tribal group copes with climate variabilities, such as long dry spells and erratic rains, by using climate-resilient Indigenous crop varieties for farming, seed conservation, and access to Indigenous forest foods and weeds for consumption during adverse situations and lean periods. The community recognizes that the local climate variability has affected farm productivity and diversity (due to a water-stressed environment).

These changes have also influenced the availability of Indigenous foods from natural vegetation, forests, and water bodies in the region. Flavorsome Indigenous rice varieties (such as bismunia and dumarkani), which were consumed by the older generations, have now become almost non-existent or extinct. Millets (like gundli or little millet), which were widespread earlier, have presently become virtually extinct, notes Ghosh-Jerath in a research that is supported by DBT/Wellcome Trust India Alliance Fellowship.

In Meghalaya, Mawroh and colleagues strive to include local agrobiodiversity in policies, particularly neglected and underutilised species in jhum cultivation that do not receive the deserved attention. “Inclusion of the agrobiodiversity in local government programs like Mid-Day Meal Scheme (a school meal program) can be another way to encourage the continued practice of the local food system,” he said. For example, NESFAS encourages the establishment of school gardens from which vegetables are harvested and included in the meals for children.

Another way is to support the establishment and functioning of community seed banks. An affordable certification system could help the community realize the value of its ecologically sustainable food production system, which is organic. Further, the National Education Policy 2020 has tremendous scope to mainstream traditional knowledge systems in formal education, Mawroh adds.

He says it is vital to steer the debate away from jhum destroying forests to jhum providing valuable ecosystem services due to its landscape management approach. “Gradually, as the body of research grows, we will be able to unravel more aspects of such traditional systems.”