Bamboo: The Green Steel of the 21st Century

This story, by Peter Yeung, is being posted with the kind permission of the original publisher, Reasons to Be Cheerful.

About four stories up a gleaming tower block in downtown Hong Kong, a shirtless figure clambers horizontally across the building’s facade, fastens a knot and then leaps down a level like a real-life Spider-Man.

But rather than relying on hyper-elastic webs to transport himself, the young man has his own kind of miracle material: bamboo. Vast lattices of it cover the building and countless others across the bustling Asian metropolis.

“I think that bamboo may be the future,” says Wallace Chang, a professor in the University of Hong Kong’s Department of Architecture. “From a material point of view, bamboo is very sustainable. It’s relatively cheap. It’s a phenomenon.”

Throughout Chinese history, bamboo has been widely used in construction as well as everything from basket weaving to concocting sugary juice, according to Chang, who wrote Bamboo Theatre, a book tracing the culture of Hong Kong’s bamboo opera, including the spectator stands made of bamboo and the masters producing them. 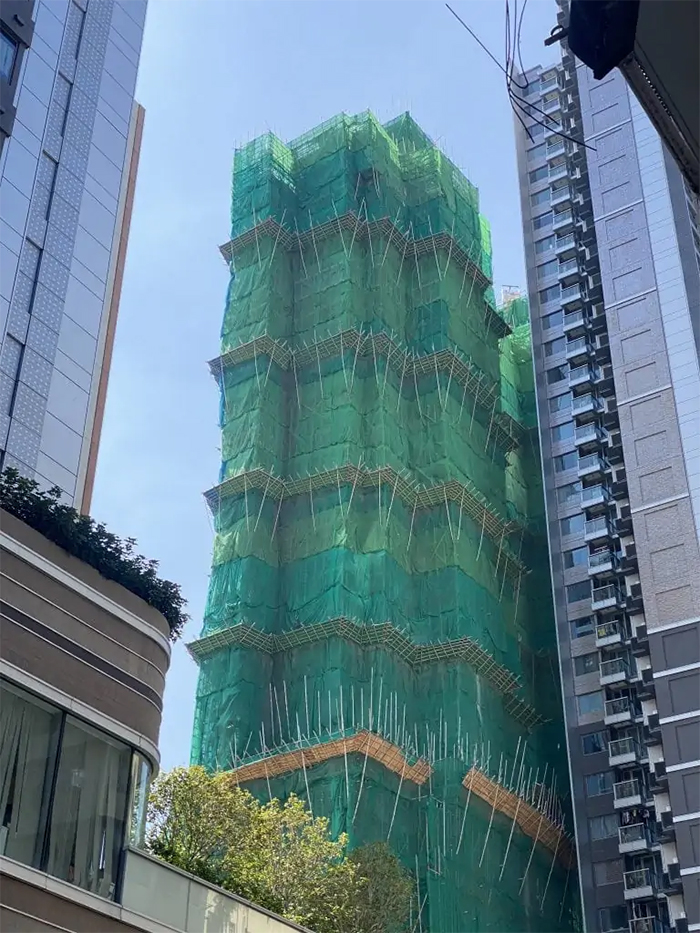 In Hong Kong, the material is closely intertwined with the craft and apprenticeships of scaffolding and construction, and it’s common to see 50-story skyscrapers like the Bank of China wrapped in it. Skilled armies of scaffolders — today the city has 2,479 registered experts — can erect enough bamboo to cover a building in a day, using techniques that are thousands of years old.

“In mainland China, Taiwan, and Macau, bamboo is diminishing, and it is being replaced,” says Chang. “But in Hong Kong, it’s been passed from generation to generation by masters.”

The ubiquitous bamboo scaffolding of Hong Kong showcases the material’s strengths — and how, like reconstituted wood, it could also be adapted to build high rises themselves. Bamboo is flexible, strong, and cheaper than steel or aluminum. It is one of the fastest-growing plants in the world — while traditional hardwood lumber can take 70 years to reach maturity, bamboo can be harvested in a few years, growing in some cases 60 centimeters (~24 inches) a day.

“It has the potential to be the most affordable structural material on the planet,” says David Sands, founder of Rizome, a company engineering bamboo products. “And the potential it has to cut our emissions is absolutely enormous.” 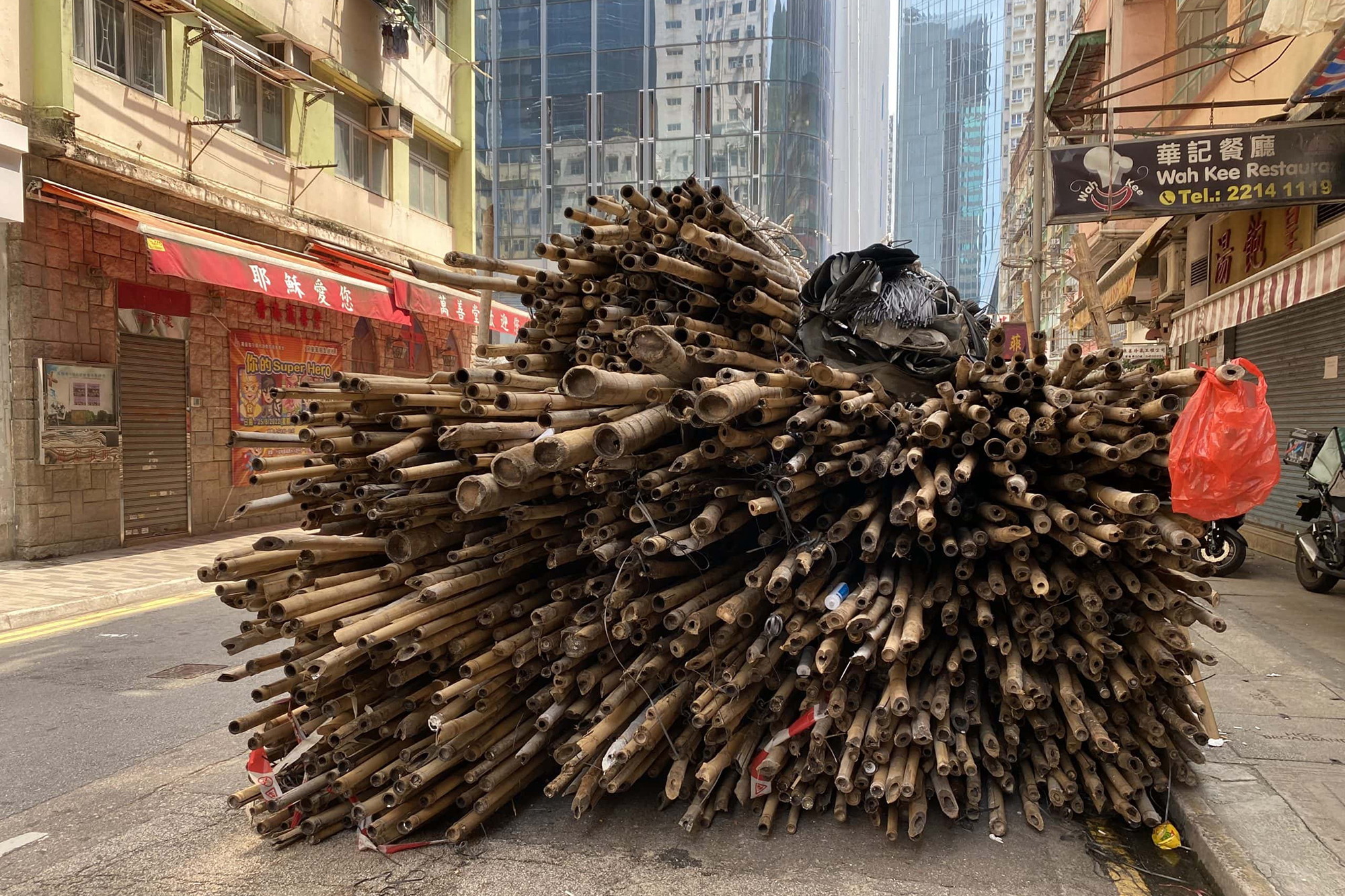 Pile of construction bamboo on the street in Hong Kong. Photo credit: Peter Yeung / Reasons to be Cheerful

Today, buildings and construction are responsible for about two-fifths of all global carbon emissions. Such emissions hit their highest-ever level in 2019, according to the Global Status Report for Buildings and Construction, increasing to 9.95 gigatons of CO2. Bamboo’s potential to mitigate this is far from immaterial — concrete and steel alone account for around 15 percent of global annual greenhouse gasses. And the world is set to add 2 trillion square feet of buildings by 2060 — double the current amount, and the equivalent of constructing one New York City every month for the next 40 years.

As this global construction boom gets underway, a spurt of interest in bamboo has provided green shoots of optimism. Renowned Vietnamese architect Vo Trong Nghia, for one, has described bamboo as “the green steel of the 21st century,” and his firm, Vo Trong Nghia Architects, is leading the way when it comes to building with green and natural materials.

“Whenever I have the option to use bamboo, I use it,” says Nghia, who grew up in a village where bamboo furniture and tools were common. “It’s natural, it can reduce our environmental impact and it can reduce energy use. It can help a lot.”

As an architect, Nghia first incorporated bamboo into his designs in 2006 for the Wind and Water Cafe, a magnificent thatched bamboo dome in Vietnam’s Binh Duong province, which is one of the earliest examples of bamboo in contemporary architecture. Currently, he’s developing an ambitious 3,600-square-meter (~38,750 square feet) bamboo meditation hall in north Vietnam, which would be one of the largest such structures in the world.

“From Indonesia to Thailand and Latin America, many architects are now seeing the value of using bamboo,” says Nghia. 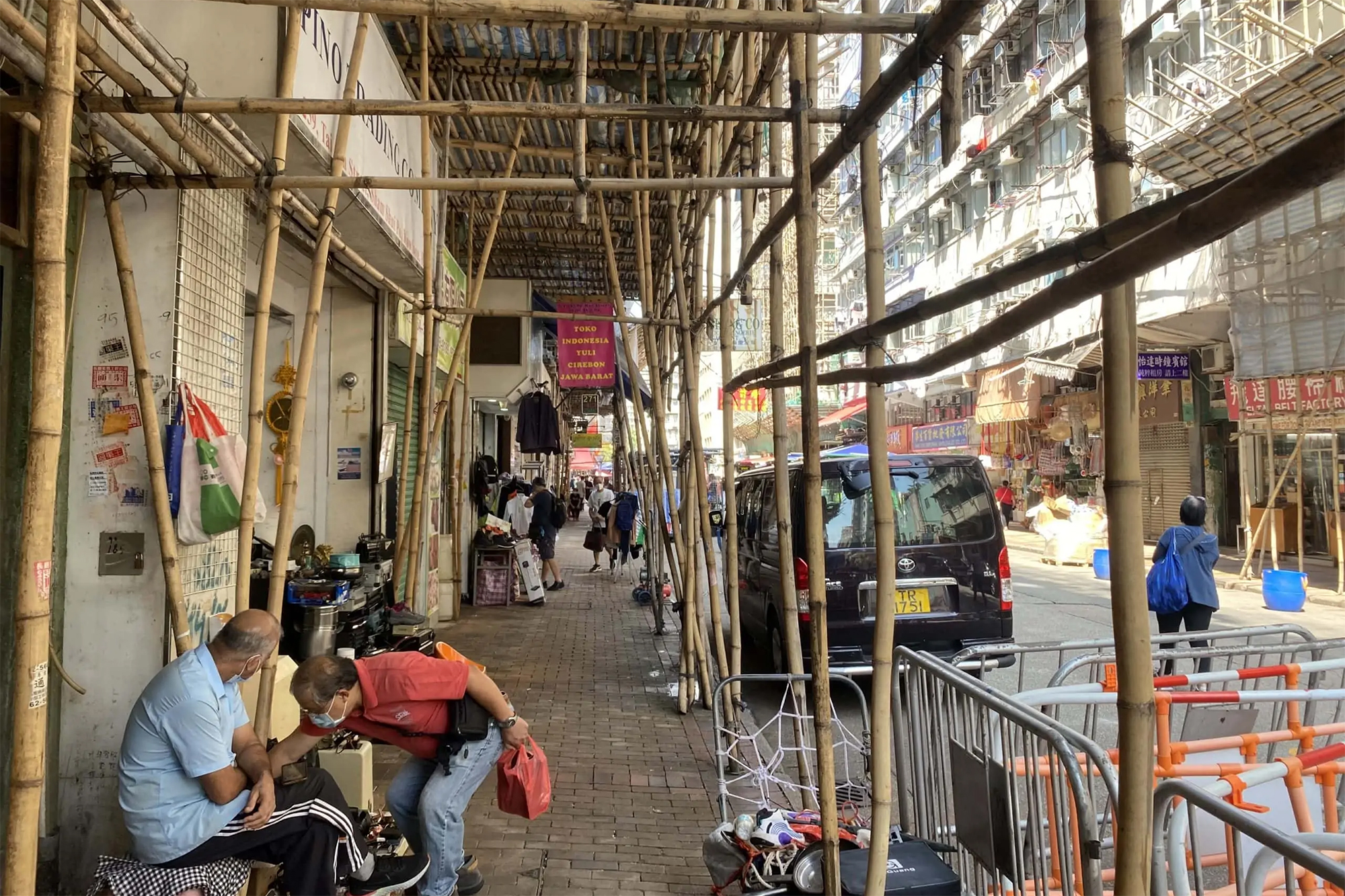 One company in the Philippines, for example, is set to house 10,000 workers and their families by 2023 in a modular housing system made from bamboo known as Cubo, providing an affordable alternative to slum housing in Manila. Indonesian firm Ibuk, meanwhile, is experimenting with ambitious designs such as The Arc in Bali, which has a self-supporting roof of 14-meter-high (~46 feet) arches made from bamboo.

Others are working to develop bamboo itself. Alireza Javadian, head of research for sustainable construction at Germany’s Karlsruhe Institute of Technology, studied the most common species from Africa, Asia, and Latin America, and found that Giant Guadua bamboo was best suited to develop a powerful “composite material.” 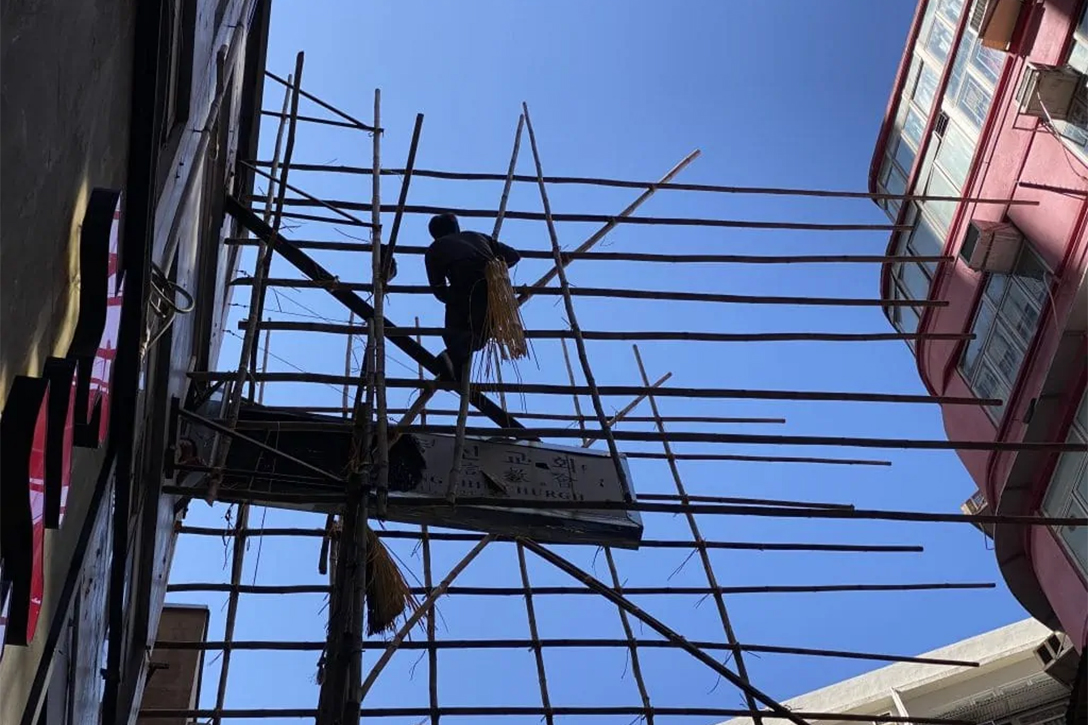 Giant Guadua bamboo, native to Latin America and commonly grown for lumber in Colombia, can grow up to 20 feet in five years, according to Javadian. The culms, or stems, have thick walls with a large inner cell structure and thick growth joints, which provide elasticity and help prevent mold and insect damage. “It’s an amazing material,” he says. “It has a mechanical property and grows very fast.”

For now, supply is ramping up. Rizome aims to plant 10 million bamboo clumps of Guadua, a noninvasive species, by 2030, both in the Philippines and in Florida, where it believes bamboo could become a cash crop for the flagging citrus industry.

Rizome is currently producing hardwood replacements, but it needs to develop softwood replacements to do the job of concrete and steel, which will take time. But the gains could be huge: The company claims that 12 percent of global construction could shift to bamboo — and in doing so, one-third of global emissions could be wiped out through avoided emissions and carbon sequestered by bamboo plantations.

But according to Chang, the two main challenges facing wider, long-term adoption of bamboo are, firstly, the support of architects and companies, which he says is already beginning to shift, and secondly, the development of a regulation framework. 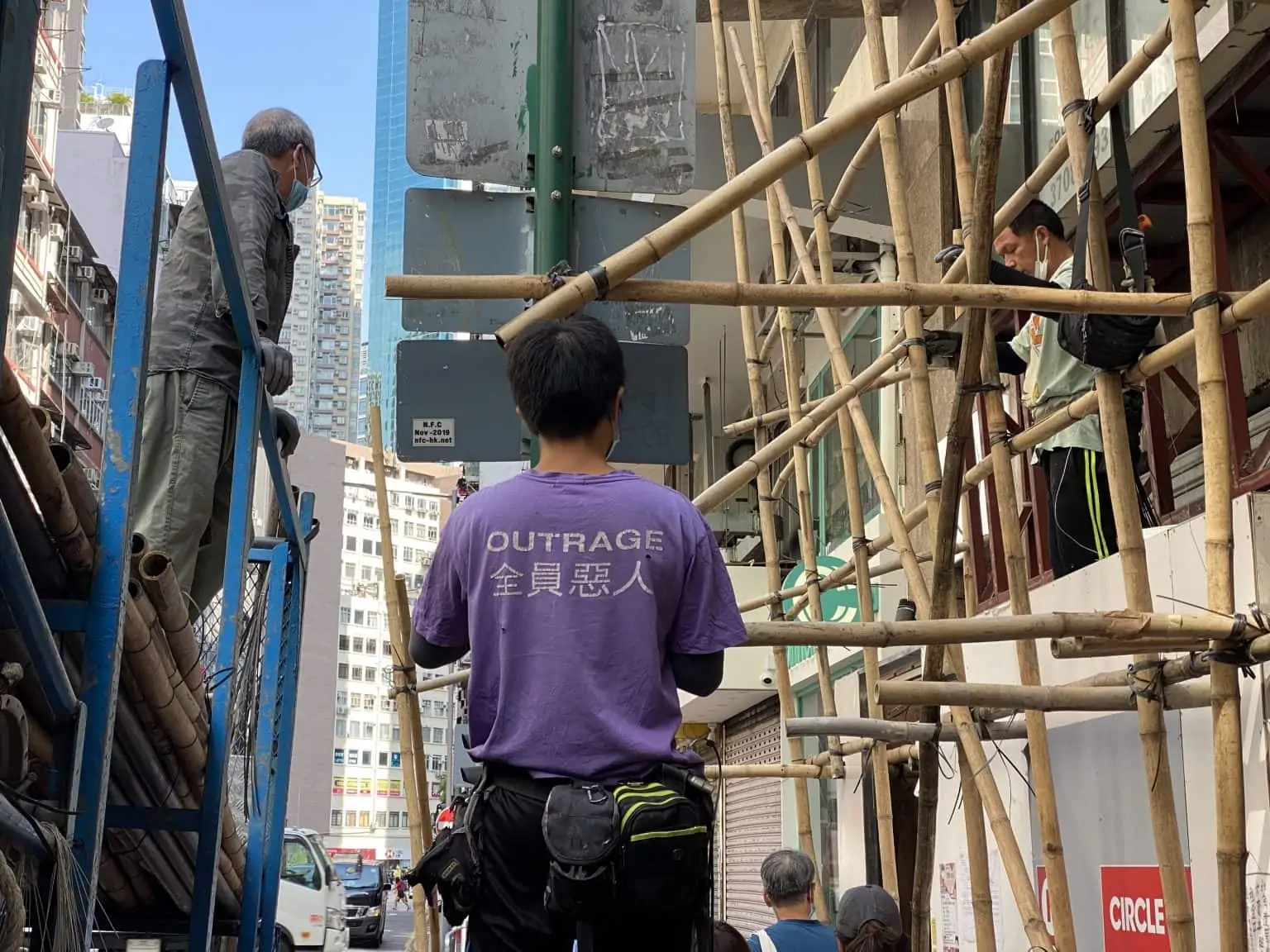 “It requires more substantial support from material science and from the regulating authority,” he says. “Regulations shouldn’t be an afterthought, they should be developed in parallel.”

Javadin, whose team carried out market research with construction companies in Singapore and Zurich, agrees. “Convincing the larger players is difficult,” he says. “The problem is that bamboo is either seen as a poor man’s timber or that it is creative, fancy, and something nice to have. Neither is true.”

Back on the busy streets of Hong Kong, the use of bamboo everywhere from old crumbling shacks to cutting-edge apartments is evidence that the naturally grown material can, and perhaps must, have a place in the modern world.

“We need to be growing bamboo at the scale of millions of hectares,” says Sands. “And it needs to happen quickly.”

Peter Yeung is a contributing editor at Reasons to be Cheerful. A Paris-based journalist, he also writes for publications including The Guardian, the Los Angeles Times and the BBC. He’s filed stories from across Europe, Asia, Africa, and the Americas.