Children who fled Mariupol have decorated a nursery in Dnipro with drawings of their former home. Photo credit: Bryce Wilson / WhoWhatWhy
Politics

Where Do Refugees Go? Ukrainian Cities Swell With Displaced People

DNIPRO, Ukraine — In a bright, spacious nursery on the second floor of the main library in Dnipro — Ukraine’s fourth largest city, located in the near-geographic center of the country — children’s drawings paper the walls.

Most of them show scenes of life in Mariupol before its destruction during the three-month Russian siege: the city center decorated with Christmas lights; smiling children holding their parents’ hands; or the Soviet-era monument to the city’s “soldiers-liberators,” featuring an in-flight MIG-17 fighter jet. Several, in bright colors, depict the Donetsk Academic Regional Drama Theater, where as many as 600 civilians were killed in March after the Russians dropped two 1,100-pound bombs on the building.

“No one can better understand what those people are going through than people that have lived through the same thing,” said Svetlana Shtenda, a Dnipro municipal employee and the coordinator of the “I am Mariupol” center that’s taken over the library, decorated with somber mementos of an outrage. “We do our best to keep the spirit of our community alive, while providing support and relief to people who have been through hell.”

More than three-quarters of Mariupol’s pre-war population of 450,000 have fled the city. An estimated 50,000 have ended up in Dnipro. They are a trickle of a larger flood. Strategically located between the eastern region of Donbas and the southern front of current fighting, almost 277,000 internally displaced people have been registered in the region of Dnipro since the war began on February 24. Among them are more than 68,000 children.

But in recent weeks, as the war turns into a grinding artillery exchange, the influx of refugees has grown exponentially. During the week of June 13 alone, another 4,000 people moved to Dnipro from the Russian-occupied Donbas and Kherson regions of southern Ukraine.

So far, Dnipro has managed to handle the influx of traumatized refugees — and to welcome them. But as the war drags on, and as the Russians continue to occupy refugees’ former homes, the situation raises questions: How many more refugees can cities like Dnipro handle, and for how much longer?

Shtenda herself is a refugee. She and her husband fled Donetsk at the height of the fighting between Russia-backed separatists in the breakaway republics in 2014 — for Mariupol. When Mariupol — the home base of the controversial Azov Regiment and a symbol of the successful Ukrainian resistance in 2014 — came under attack in 2022, she decided to stay. It was a mistake. Later, when things got much worse, she could not leave.

“We spent three weeks and a half in the blockaded city, in terrible conditions,” she said. “No water, no gas, no electricity, and under constant shelling.” The night the family made it out was her son’s 15th birthday. “Escaping Mariupol was the best present we could have given him,” she added. 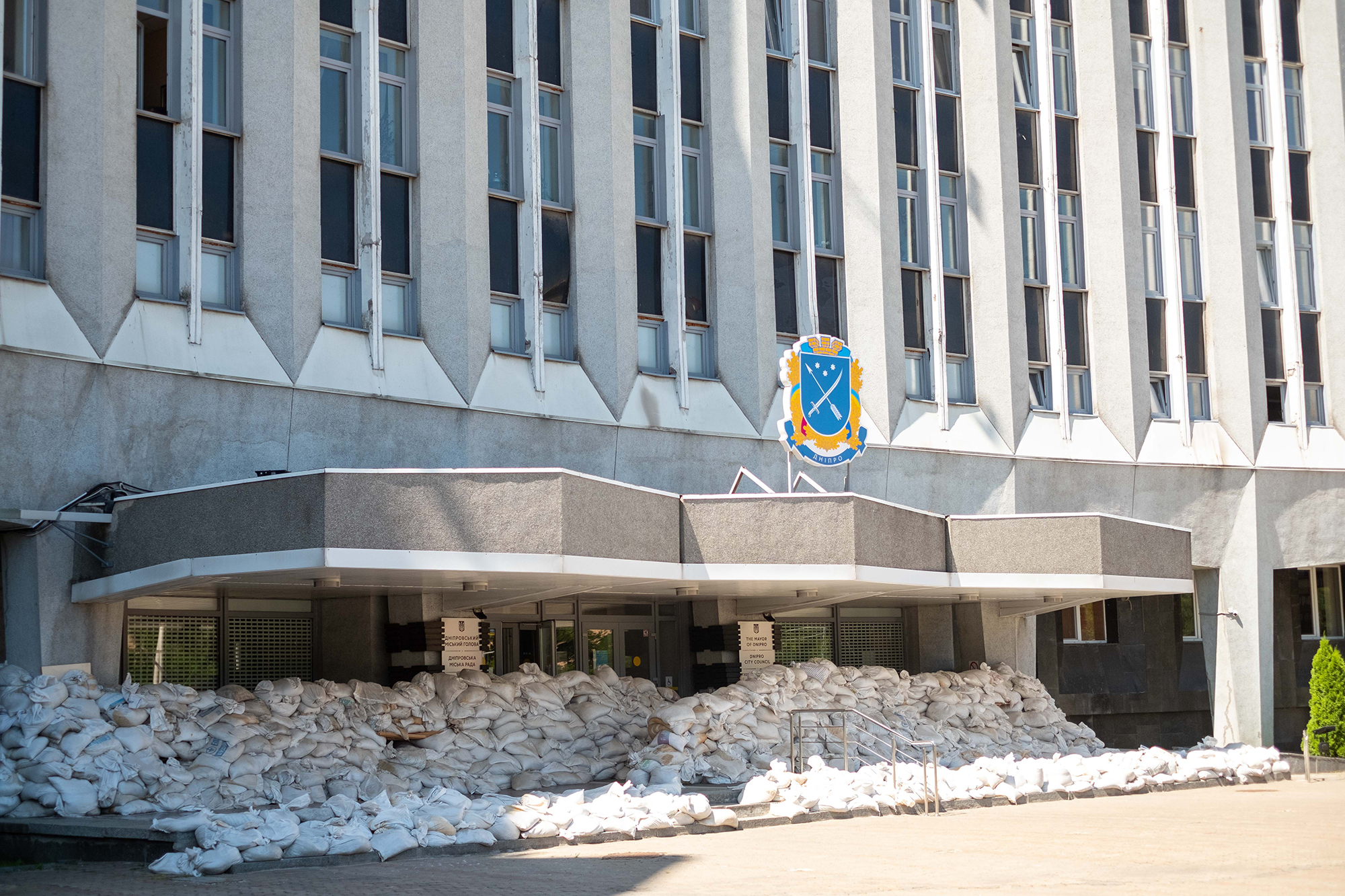 Dnipro has also become the de facto capital for the Mariupol city council, which has become a government-in-exile of sorts.

The refugee center at the Dnipro library — a cooperative effort from the Mariupol and Dnipro city authorities — opened in late April. Internally displaced people can access medical and psychological services, obtain humanitarian parcels, and simply enjoy a place to gather. The facilities are provided free of charge by Dnipro’s city council, and there are already plans to extend its capacities.

“We are all one country, and we must help each other, no matter where we come from,” declared Borys Filatov, Dnipro’s mayor, at an opening ceremony. “We are ready to help Mariupol, and Kramatorsk, and Slavyansk, and Kharkov — without discrimination.”

The city of Dnipro alone has allocated more than $10 million to social services for displaced people, and the regional authority has disbursed another $15 million to resettling refugees.

As of today, around 30 people come through the center each day to receive medical or psychological help, food parcels, and administrative support: all free of cost, all covered by “volunteers and international organizations,” Shtenda explained.

As we exited the building, a green Daewoo shredded by shrapnel pulled up in front — a grim reminder of the ordeal people had to go through to reach the relative safety of Dnipro, as Russian artillery keeps pounding towns and villages along the front line into dust, and the flow of displaced people continues unabated. 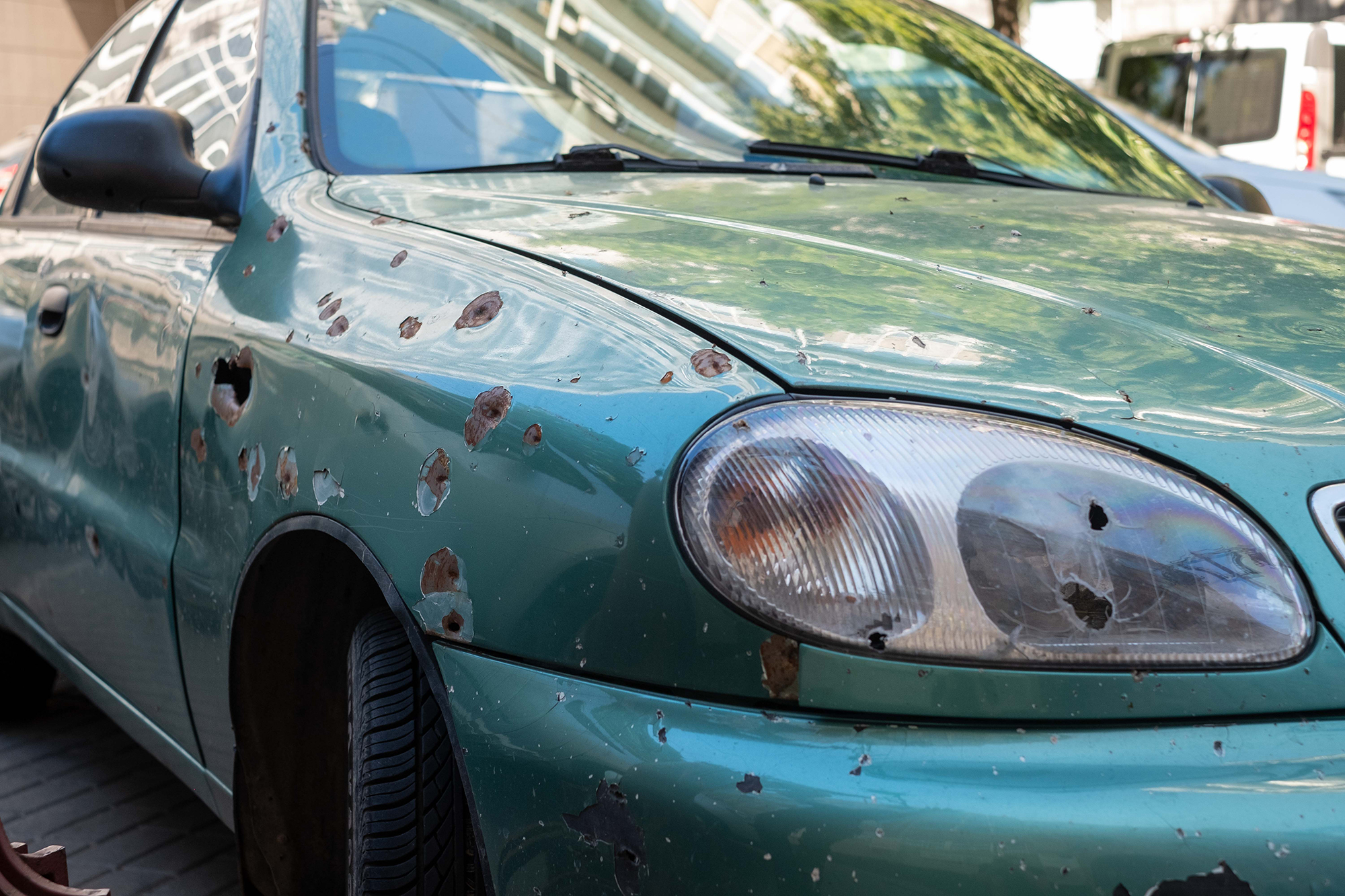 These new arrivals bring the number of refugees in the regional capital to 110,000, making it the city with the highest proportion of internally displaced people in the country. Another 50,000 refugees now reside in Kryvyi Rih, the second largest city in the region. Most Ukrainians who have fled their homes have ended up in big cities, confirmed Marina Boïko, a spokesperson for the Dnipro regional administration. So far, many have been able to find work via Telegram channels advertising gig work and part-time and full-time jobs.

“Most manage to find housing on their own,” Boïko said. Those that don’t rely on charity, and everyone needs more than housing.

“We house them, we feed them, we try to provide them with psychological help and support,” says Lyubov Pikhalova, gesturing towards the decaying Soviet building behind her, where 40 refugees from the Donbas are currently housed. “But these people have suffered so much, it will take them a long time for those wounds to heal.”

As is often the case in refugee centers around Ukraine, Pikhalova — a former shopkeeper in her 40s — is both an administrator and a displaced person herself. “I come from one of the most beautiful cities in Ukraine, Kharkiv, which is being methodically destroyed by the invaders,” she tells us in Russian, her voice breaking with emotion. 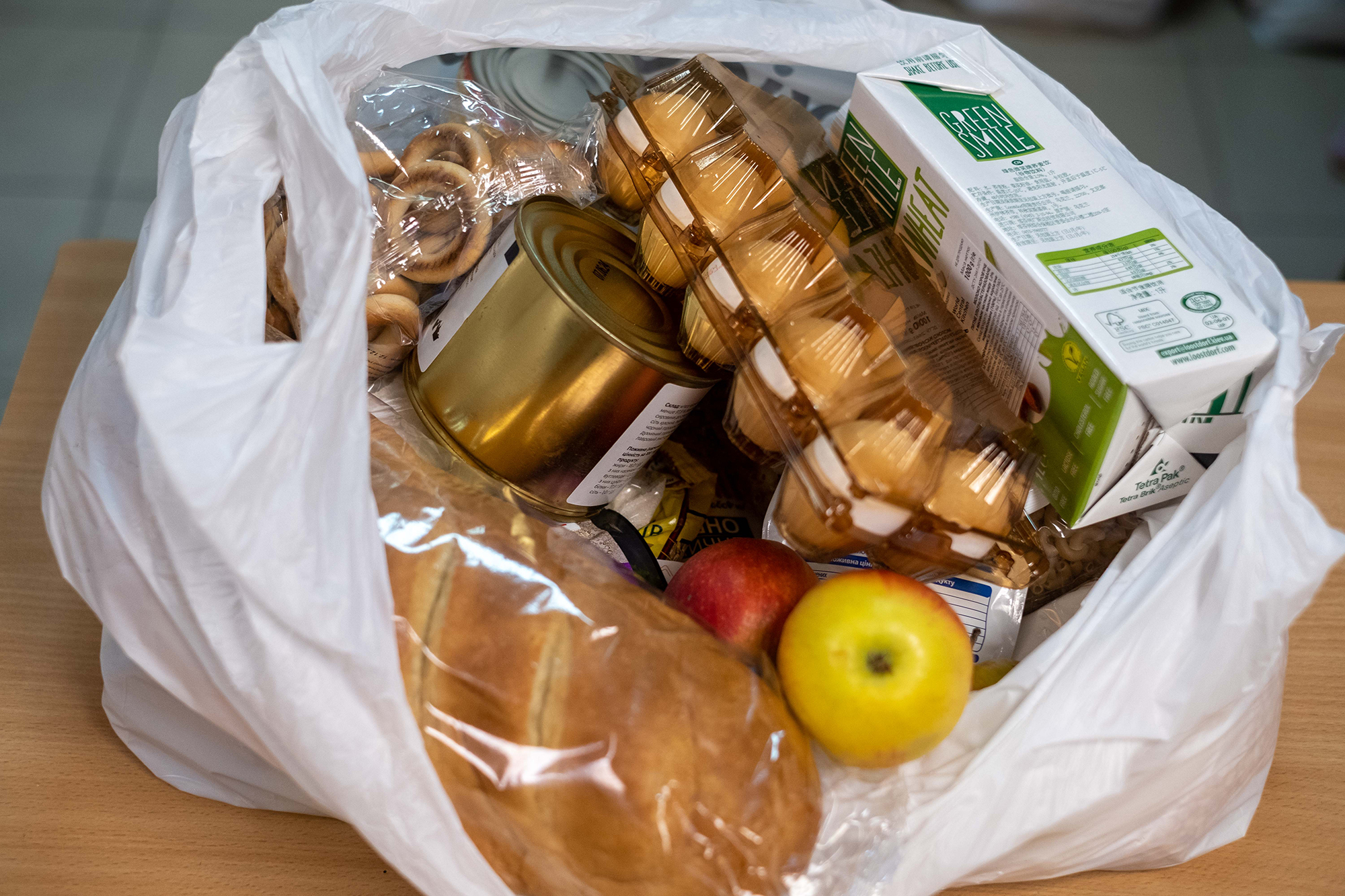 Food parcels handed out to refugees from Mariupol at a center in Dnipro. Photo credit: Bryce Wilson / WhoWhatWhy

Families with children, elderly or disabled people, men and women wounded or traumatized by the shelling — all are welcomed at the center, where they are provided with food, accommodation, and psychological support. Almost all of them come from the Donetsk region, where the war has turned into a devastating artillery slugfest, and where entire towns have been reduced to smoldering ruins.

”I come from a small, quiet town, we had a good life there.” says Alla, a portly grandmother of two, weighing each of her words. Straining her eyes in the bright summer light, she recounts how — with her daughter, son-in-law and two grandchildren, Dima, 9, and Natasha, 10, — she left her hometown of Soledar on June 17. “It had become too dangerous, the Russians are bombing the city constantly,” she sighs. “We wanted to protect the children.”

While they were all grateful for the help they’d received in Dnipro, few of the displaced people we talked to wanted to settle there permanently.

“All we want is for the war to end quickly and for us to be able to go home,” explains Lyudmila, Alla’s daughter. “Our house is still standing, even if the windows have blown out. It is waiting for us.”

Along with the influx, there has been an outflux. Regional authorities estimate that more than 200,000 people have left Dnipro since the war began. Their destinations — western Ukraine, neighboring countries, or back to the Donbas, where the risk of forced deportation to Russia looms — are unknown.