So About Those Ukrainian Nazis…

Over the weekend, several correspondents for mainstream Western media outlets covered a training session conducted by a unit of the Ukrainian national guard in Mariupol, a city in eastern Ukraine on an inlet of the Black Sea called the Sea of Azov, not far from the Donbas region that’s been occupied by Russian-backed separatist forces since the 2014 invasion.

In response to the ongoing threat of another, bigger Russian invasion, civilians were seen receiving basic training in handling assault rifles and other military fundamentals. One image in particular resonated: a gray-haired, 79-year-old great-grandmother sprawled on the ground in firing position aiming a Kalashnikov as a man in camouflage fatigues hovered above her giving instructions. On the man’s arm was a patch with his unit’s insignia: a yellow and blue Wolfsangel below the word “Azov,” indicating he belonged to the Azov Regiment.

Ukrainian great grandmother, Valentina Constantinovska, on an Ak-47, training to defend against a possible Russian attack. “Your mother would do it too,” she told me. pic.twitter.com/PnojqRir4K

What is the Wolfsangel? It’s a runic emblem with origins in Teutonic heraldry, which once symbolized the struggle for freedom but was co-opted in the past century by all kinds of extremely problematic characters, including Nazi SS panzer divisions in World War II and modern neo-Nazis. But more importantly, what is Azov — and are its members Nazis, as some reporters and activists insist? And does this mean NATO is sending troops and money to Eastern Europe to prop up fascists?

The answer can depend on whom you ask. Azov is a unit of the Ukrainian national guard now under the control of the country’s Ministry of Internal Affairs. But according to members of Congress, as well as left-leaning writers and researchers, Azov is also a “neo-Nazi” and “white supremacist” organization with global connections to other far-right movements.

Following the viral babushka civilian defense instruction, “Azov are Nazis” was the quick-and-easy interpretation picked up by left-leaning Western media and public figures: “Why Is This AK-47-Toting Ukrainian Grandma Being Trained by Neo-Nazis?” Vice asked.

This in turn leads to questions as to just what is going on in Ukraine.

These are fair questions to ask about the deeply problematic Azov unit, its undeniably far-right origins, and its current affiliations and ideologies. Inconveniently, they are also the kinds of questions Russian President Vladimir Putin and the Kremlin want Western democracies to ask.

Though its origins when it was founded a decade ago are undeniably far-right, and while at some point Azov undeniably did welcome neo-Nazis, the Azov unit’s leaders today insist their regiment, which consists of around a thousand officers and soldiers, has nothing to do with politics. The unit “is not a political organization. It’s just a regular unit of the national guard,” asserted Anton Shekhovtsov, a lecturer at the University of Vienna who has published several books on the eastern European far-right. “It doesn’t have any ideology because it cannot have ideology. It’s not a political organization, it’s a military unit.”

What is ideological, Shekhovtsov insists, is sloppily casting Ukrainians as neo-Nazis — a tactic Russia has been employing to discredit Ukraine and sow confusion among its erstwhile friends in NATO countries since Russia and Russia-backed separatists started carving off huge chunks of Ukrainian territory in 2014. (As another expert told Vice, “Had there not been an Azov, Russia would have invented it.”)

“This a recurring narrative for [the Russians], using [Azov] to undermine Western support for Ukraine,” Shekhovtsov added. “It’s their totally normal procedure. There is nothing new here.”

Other researchers agree that Westerners tend to fixate on symbols or isolated images that fuel a misperception that’s often difficult to correct.

Engel never identifies the paramilitary forces as members of the Azov Brigade. He does not care to share this information with the American audience. But the Azov Brigade insignia on their armbands – inspired by Himmler's SS – establishes their identity. 2/ pic.twitter.com/NaQBTznjnH

“The role of neo-Nazis in volunteer battalions has been blown way out of proportion in the media and has given the erroneous impression that all of Ukraine’s volunteer battalions are populated with neo-Nazis,” Andreas Umland, an analyst with the Stockholm Centre for Eastern European Studies who has extensively researched Azov’s origins, said in a 2014 interview.

This is not to say that Azov is good. Under the control of Ukraine’s Ministry of Internal Affairs since 2014, the unit began as the “Azov Battalion,” a militia unit co-founded by Andriy Biletsky, a far-right and anti-Semitic politician who also co-founded an extremist group called Patriot of Ukraine.

It was Patriot of Ukraine’s version of the Wolfsangel that Biletsky used for his militia insignia when he slapped together a collection of Patriot of Ukraine street fighters, soccer hooligans (mostly Dynamo Kyiv supporters, if we’re keeping score), and other newly minted activists from the 2013-2014 Maidan movement to resist the Russian invasion when the ill-equipped and ill-led Ukrainian regular army could not. And they were successful.

“We do know the Russians absolutely despise these guys, because they were pretty good at fighting when the Russians first invaded,” said Kristofer Harrison, a former Defense and State Department adviser during the Bush administration and a Russia expert. 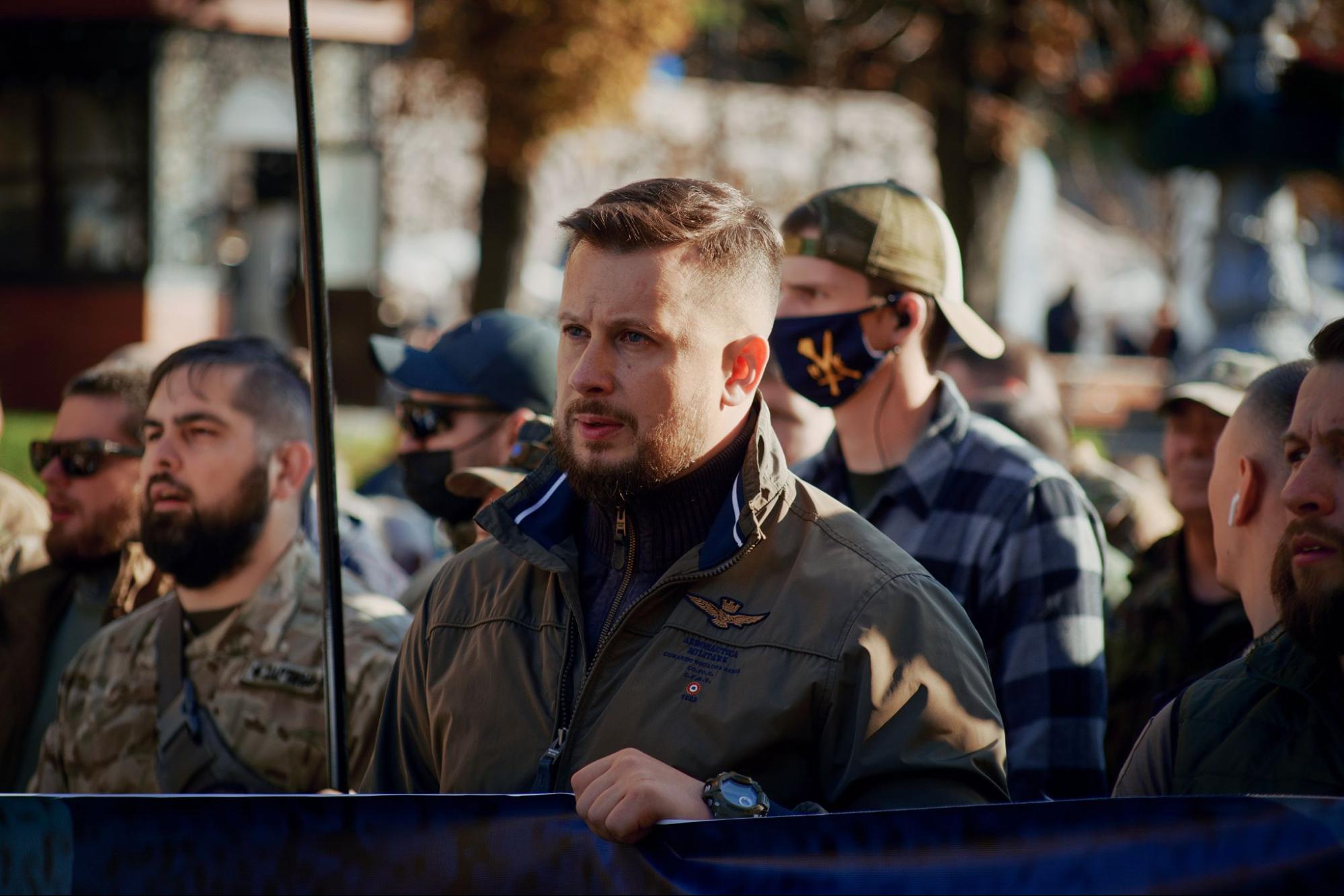 Ukrainian nationalist Andriy Biletsky on the march on the Day of the Defender of Ukraine in Kyiv, October 14, 2020. Photo credit: spoilt.exile / Flickr (CC BY-SA 2.0)

If this organization had a singular unifying ideology, it was a very basic, almost superficial version of Ukrainian nationalism generated in response to Russian aggression: “Ukraine good, Russia bad.” However, there is no doubt that Biletsky and some Azov Battalion fighters were neo-Nazis — at least “10 to 20 percent” of the unit, as the group’s official spokesman once admitted.

“At the end of the day, if someone invades your country, you’re gonna attract some oddballs with nationalistic feelings who want to beat off the invaders,” Harrison said. “That doesn’t mean you’ve got a bunch of Adolf Hitlers.”

“Ukraine has got 450,000 people under arms right now,” he added. “You’re gonna get a couple thousand that are moonbats.”

Its founding members’ core principles have dogged the reputation of Azov, whose unit flag undeniably appears next to the swastika and other Nazi imagery in photos circulating online. What political affiliations current Azov members hold is unclear, though it is clear that they take orders not from Biletsky but from Ukraine’s democratically elected government. Within a year, the Azov Battalion became an official unit of the Ukrainian national guard under the patronage of former Interior Minister Arsen Avakov, a nationalist who has been accused of giving succor to anti-Semites.

Biletsky, who served in the Ukrainian parliament from 2014 to 2019, is still around. Today, he leads a new far-right party called National Corps, which has failed to win any seats in parliament.

But according to at least one researcher, Azov and whatever Biletsky is up to today remain interchangeable (an analysis that Umland and Shekhovtsov reject). Michael Colborne, a journalist who wrote an upcoming book on Azov, alleges that under Biletsky’s leadership and with the official status that the military unit enjoys thanks to Avakov, Azov remains one of “the most ambitious and dangerous far-right movements in the world.”

In extensive reporting, Colborne documents how Azov attracted “anti-Putin far-right Russians” kicked out of Russia after the Kremlin deemed them a threat. However, in Colborne’s reporting, there is little distinction between the Azov unit in the Ukrainian national guard and what he refers to as the broader “Azov movement,” composed — at least in part — of Azov Battalion veterans. Colborne uses “Azov” to refer to Biletsky’s National Corps, even though the National Corps itself does not use the Azov name; nor does it use the Wolfsangel.

Further, there is little documentation that indicates current Azov unit members’ ideologies. That doesn’t matter much to outlets like the left-leaning Grayzone, which alleged as late as 2019 that Azov “is a notoriously brutal neo-Nazi militia” and an “explicitly fascist paramilitary group that organizes around neo-Nazi ideology” — statements that were at least partially true in 2014, but may no longer be accurate today.

There have also been allegations that Azov engaged in international right-wing extremism. This idea has been pushed by Ali Soufan, the former FBI agent who investigated al-Qaeda ahead of the 9/11 attacks. Soufan wrote a New York Times op-ed with former Rep. Max Rose (D-NY) in which they claimed American extremists had traveled to Ukraine to “train” with Azov.

However, Soufan’s claims were never substantiated. An FBI report he referenced in his op-ed  only mentioned that American extremists had met with Azov battalion veterans — not with members of the current national guard unit. Rumors that the Christchurch mosque (New Zealand) mass murderer trained in Ukraine have never been proven, and claims that he was inspired by Azov hinge on a patch he had on his rucksack: the black sun, not the Wolfsangel.

What is known is that a pair of Americans associated with Atomwaffen, a neo-Nazi group, traveled to Ukraine in 2020 with the idea of joining Azov — and were promptly kicked out of the country. There is no sign that the Azov unit seen in the training videos recruits or tolerates foreign fighters of any stripe. And Nazi imagery is absent from Azov unit recruitment materials found online.

Shekhovtsov rejects the idea that a civilian “Azov” is big, organized, or successful enough to qualify as a “movement.” He also classifies the writers and researchers who label Azov today as absolutely Nazi, without any qualification, as “pro-Putin, anti-imperialist crackpots.”

“The Azov movement does not really exist,” he added. “There is this party, yeah, but it’s totally unsuccessful. Nobody wants to support these idiots. There is no such thing as this ‘movement.’” 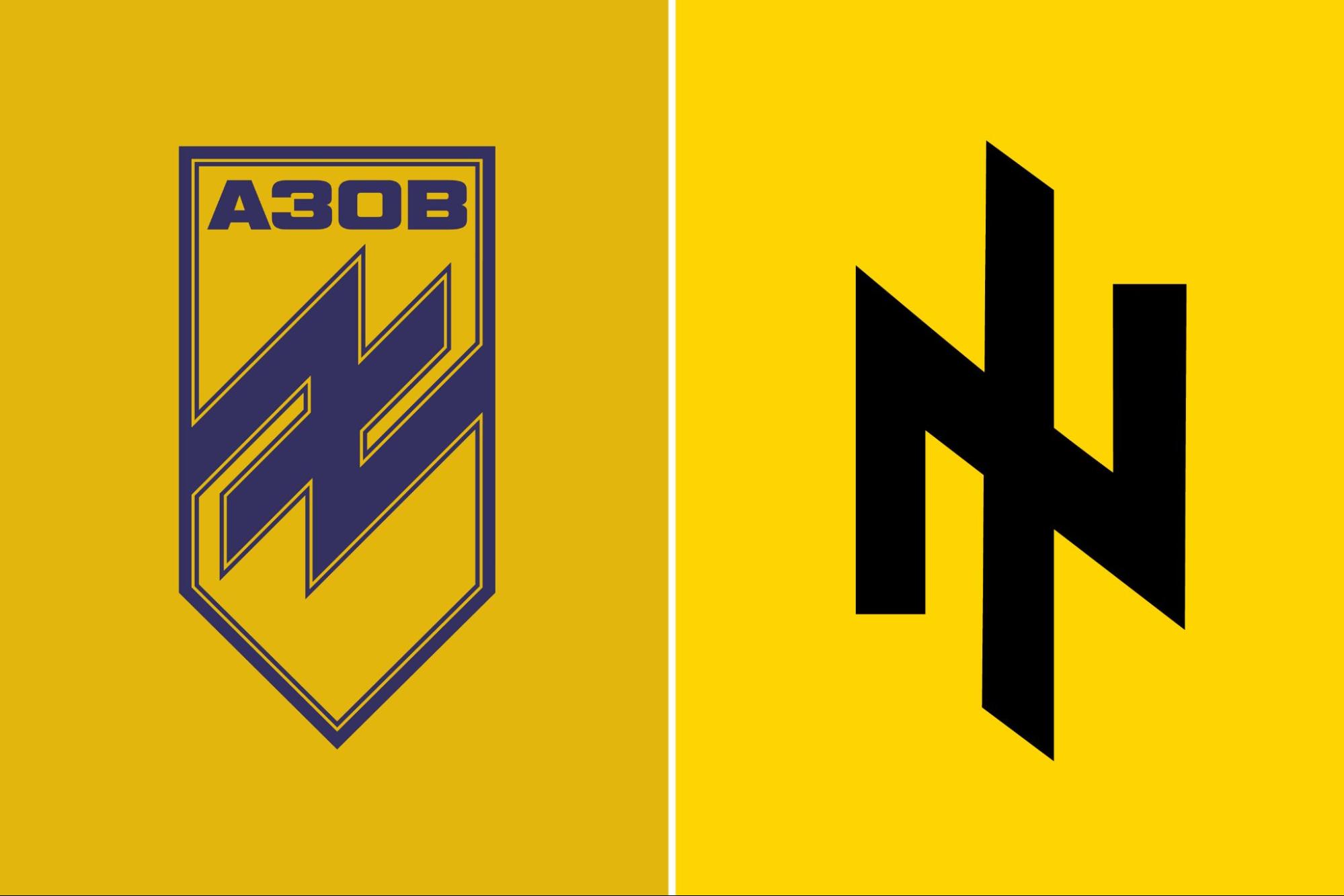 Emblem from the flag of the Patriots of Ukraine (left). Emblem of the Azov Battalion (right). Photo credit: MrPenguin20 / Wikimedia and Inkscape’r / Wikimedia (CC0 1.0)

What connection there is between Biletsky and the neo-Nazi core of the Azov Battalion of a decade ago and Azov today — the Azov fighter training the babushka — “is an historical one,” said Shekhovtsov, who noted that there was no indication that the weekend’s civilian training included any political instruction (aside from “resist the Russians”).

For Americans and other news consumers who don’t speak Ukrainian or Russian, and have no direct connections to the region or sources on the ground, the Azov saga represents two things. One, how difficult it is to get unfiltered news from the area — and whose line you end up repeating when you can’t. And, two, how deeply problematic Azov remains, not just because of its origins but also because of its modern-day branding.

If Azov had ditched the Wolfsangel or chosen a different name when it was assimilated into the Ukrainian national guard, the name likely would never have gone viral, and Ukraine’s fringe far-right would never be mistaken for national orthodoxy.

“Just about the only actual reporting you’re going to find on this is either generated by the Russians directly or was fed to reporters by the Russians, but the bottom line is, these guys are a bunch of weirdos,” said Harrison, who allowed that even Ukrainian government officials “don’t like [Azov], but they are not Hitler.”

Harrison has also been swept up by the thorny and seemingly endless dialectic around Azov. In 2018, Harrison penned an opinion piece in The Hill that suggested US Rep. Ro Khanna (D-CA) was fooled by Russian propaganda when he pushed the budget amendment that denied Azov funding. He was, in turn, lambasted by Soviet emigré Lev Golinkin, whose blistering riposte hinged on the dated misunderstanding that Biletsky was still in charge.

Since then, the discourse has not advanced much.

“There’s no question they used to have some bad apples in there,” Harrison said. “There’s also no question you don’t have a bunch of extremist lunatics in there now.”

But as the recent misleading and misled hoopla demonstrated, Azov remains a permanent magnet for extreme feelings.