Anastasiia Marmyzova, 34, lived through bombings and shellings in Mariupol. She and her 7-year-old son lost their friends in mortar fire. She hid with her family in freezing basements. And, eventually, she escaped Ukraine with only her son and father-in-law, leaving behind everyone else. Patrick O’Connor interviewed Anastasiia and organized her comments into the article below.

My son is seven. His name is Alexander.

He got sick while we were in Mariupol. We couldn’t get well living in basements.

It was really cold there. Too cold and the conditions were bad. First the children got sick and then we did. We took turns.

It’s been a long while since then, but he never stopped coughing. My son and I are in Poland now and one morning he woke up with a stomach pain and then he vomited four times. We went to the hospital and the doctor checked him and said it might be either a virus or appendicitis.

We’ll leave the hospital, but we’ll never go home again because we don’t have a home anymore. We once had a truly happy life in Mariupol.

We had a two-bedroom apartment and it was spacious and full of light. My husband and I did remote work, so it was both our home and our office. He was in IT and I had just started working as an illustrator.

I always wanted to work as an illustrator, but I struggled with believing in myself. It took me a while to start doing it. I created artwork, illustrations, and patterns for children’s bedding, clothing, nurseries, and so on. 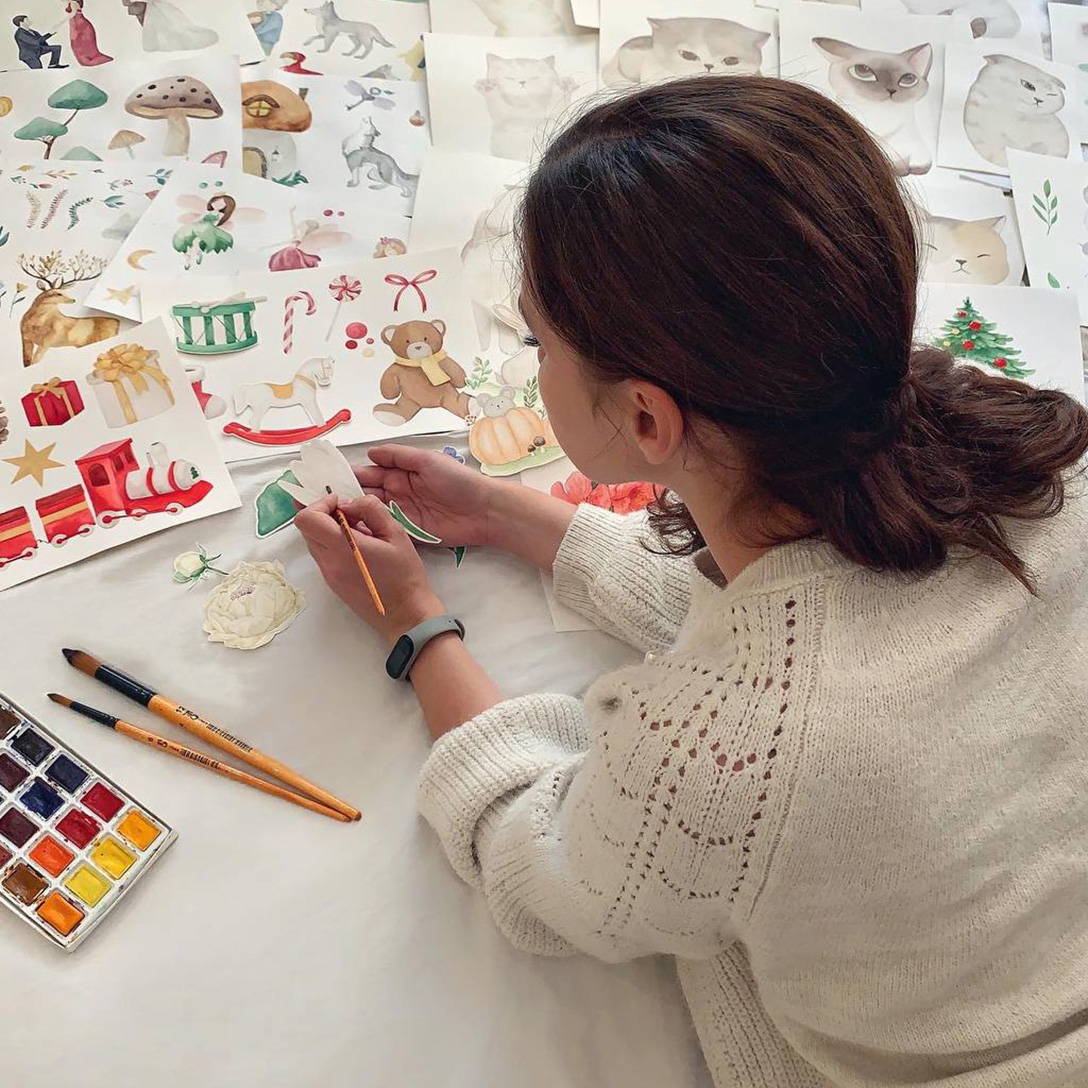 We really loved our neighborhood in Mariupol. We would go for walks with my friend after getting our kids from school. We would have some coffee and then go back home. It was beautiful.

Sometimes we would go to my friend’s place, especially when the weather was not good for walking or playing outside. My friend planned to move to Kharkiv, and her husband was there before the war started.

I’ve been grieving since March 14, when I learned that my best friend died in mortar fire. Her daughter died three days later. She was my son’s friend.

He keeps saying that he misses his home and his friend. Sometimes he looks at photos of her and watches old videos. It’s heartbreaking. 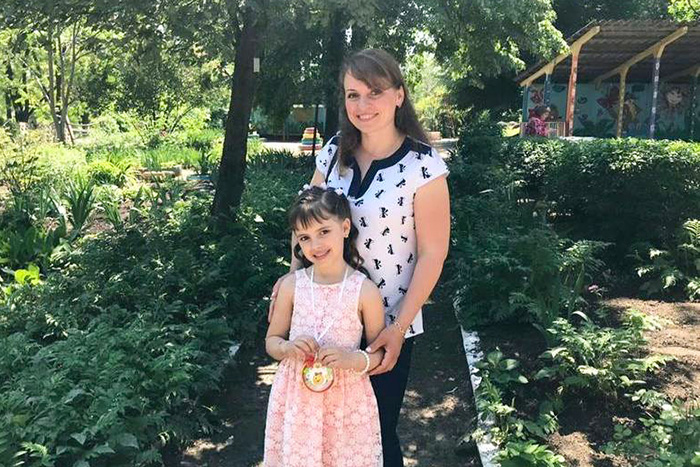 I’ve been crying every day since the day we left our apartment on February 24.

All of my family lived in Mariupol and we are a very close family. We had family days every week. Saturday, with my parents, Sunday, with my husband’s dad.

A couple of times a week my son and I would go to visit my mom at her flower store. I talked to my father on the phone every single day in the evening. It was his daily routine to check on us.

Many of the buildings in our city were designed by my father and it hurts me to see them destroyed.

We knew the war was coming. Our apartment was on the fifth floor and had windows facing one of the main roads. If there was artillery or an air attack, we wouldn’t survive, so we left.

We hid in the basement of a cafe. This was in the same building that my mom had her flower shop.

The basement was rather big. The walls and the floor were lined with tile.

We made something like a bed for our kids by moving some tables together and covering them with blankets. We also brought down little sofas from the cafe and made them into a crib for the little kids. Although it was cold, it felt very safe and was pretty clean. 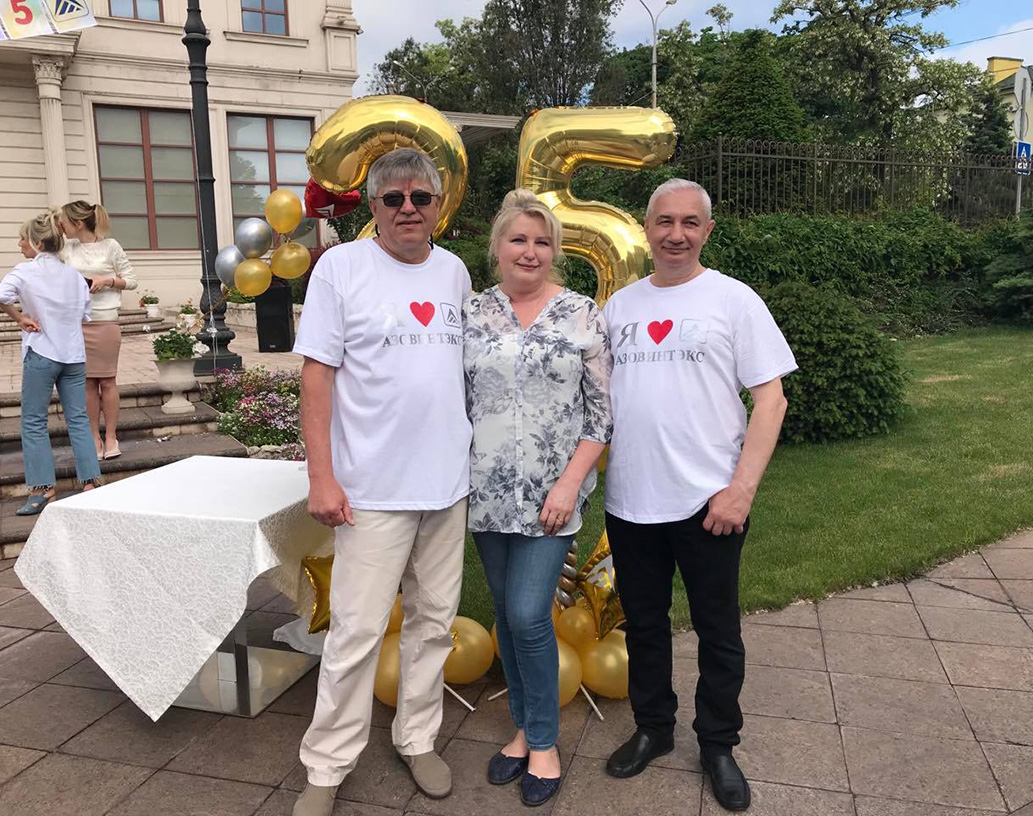 But, by March 2, we had no running water, no heat, no gas, no electricity, and no telephone communication. This is when it started to get really cold.

I missed our apartment. I remember the night before we left our apartment we could not sleep. My husband and I talked about everything. We shared all our thoughts about possible scenarios. We went to sleep around 3 a.m.

The next morning, I woke at 7 a.m. and saw several calls from my friends, even my friend from Canada. This was very scary. Then I started reading news on social media. Still, when my son woke up, we started our daily routine.

Then, at around 8:30 a.m., we heard really loud explosions. The walls started shaking and the glass in the windows were rattling loudly. We started screaming.

I woke my husband and said to pack our things. And while we were packing, we called everyone in our family, but no one wanted to leave.

They said there is nowhere to go. Russia attacked every big city in Ukraine and no one knew how dangerous it was on the roads. So we decided to stay, and to hide in a safe place.

We had one bag with our clothes and personal care products and two rucksacks with documents, devices, and meds, and two crates with a cat and a hamster. We had our kid’s school backpack with some school books and toys. That was it.

My husband managed to go back to the apartment in a couple of days to get food and meds and my son’s pillows so he could sleep better in the basement.

When we were in the basement, the Russians first hit the airport and then they started using mortars and artillery on the outskirts from the east and west of the city. 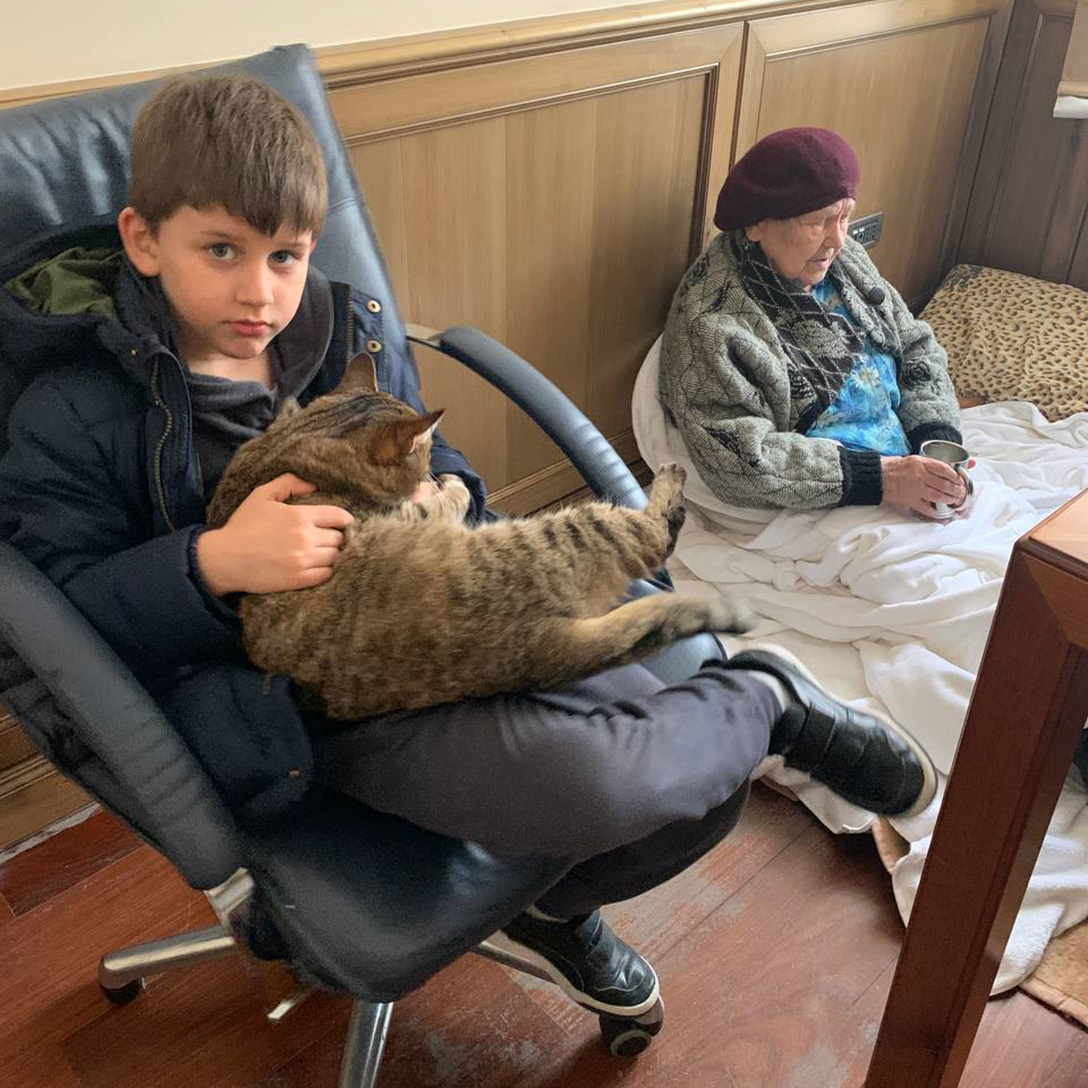 Alexander Marmyzov with his cat and grandmother keeping safe from Russian bombing of Mariupol. Photo credit: Courtesy of Anastasiia Marmyzova

I don’t remember when exactly, I guess on March 9 or 10, they started attacking the city from the air and they never stopped.

There were times when they attacked us from planes constantly. One plane after another and then another. Each dropping four bombs.

We stayed in the cafe basement from February 24 to March 5. That’s when we heard information from people on the streets that there was a “green corridor” [a humanitarian corridor] to Zaporizhia and that cars and buses were gathering at Drama Theater Square to leave.

But when we got there, someone said on a loud speaker that there was no green corridor. We decided to stay near the Drama Theater.

My relatives work at a company that has an office at that square, so we stayed there.

All the basements were occupied. We had my husband’s grandma with us, and she is 93 years old and has dementia and cannot walk due to a hip injury, so we stayed in a first-floor office.

Then, on March 9, one of the mines hit the yard and the cars parked there. A metal splinter hit the window and we got really scared for the kids and decided to move to a parking lot of a hotel near the office.

We stayed there until March 14. There was a utility room in the parking area and that’s where we lived. It had concrete walls and no windows. This last “safe house” was horrible but safe.

It was 1 degree Celsius but we managed to keep it to around 6 in the utility room. We took some blankets from the hotel upstairs and they helped to keep us warm.

We also had a power generator and could use it for about an hour a day. That hour was the happiest time of day, when we had light, could cook meals, and charge devices. I have a short video of this happy hour.

On March 14, someone saw a motor convoy of about 70 cars, and we decided to go. We had already waited enough for a humanitarian corridor and it was only a matter of time until a plane bombed the building we were hiding in.

So, at our own risk, we organized our own convoy of 11 cars and miraculously we escaped from Mariupol under the shelling.

We had to leave my husband and the rest of our family behind in Ukraine.

My husband’s grandmother, Antonina, is in a home for elderly people at Kirovograd. We couldn’t take her any further because it was too painful.

It was exhausting and scary for her. We had a really horrible route from Mariupol to Zaporizhia. Usually it takes about three and a half hours to drive to Zaporizhia. It took us about 13.

It was traumatic for all of us, but for Antonina the road was unbearable. She kept saying that we were torturing her and she couldn’t understand why we would not let her lay down.

My husband is in Lviv now. He could not leave Ukraine either. We don’t know yet but he might be drafted. 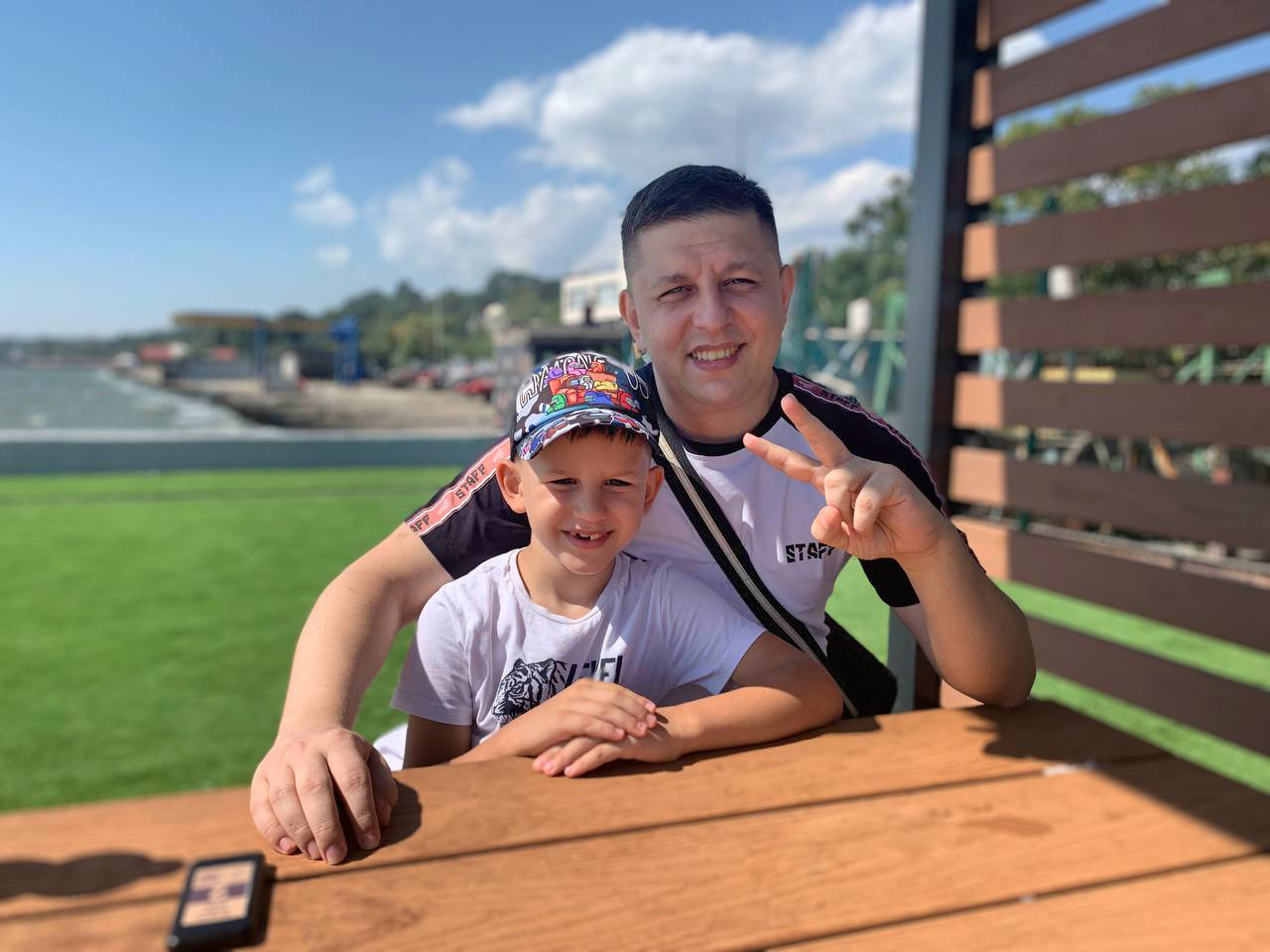 My father, mother, and grandmother are in a small town near Mariupol. They cannot leave because they don’t want to go through “filtration.” Russian forces allow our people to go either to Donetsk or to the Russian Federation.

I would like to think that I’m coping but who knows. My emotional state looks pretty much like a rollercoaster, from grateful for being alive and hopeful for a better future to completely depressed. I sometimes think it might have been better to die somewhere in Mariupol. I miss my husband a lot. We talk every day, but it’s not the same as having him by my side.

But we deliberately took this step in order to keep our son safe and to make sure he will have his bright future.

This thought makes me feel better.

Anastasiia Marmyzova is trying to get to Canada with her son. To follow her story, you can see her on Instagram at @stacie.mar. You can also help Marmyzova get back on her feet with a donation.