In what US officials called its “biggest fear” come true, Russia further reduced an already-limited supply of natural gas to Germany to 20 percent of full capacity. On the battlefield, using American weapons, Ukraine made major gains, pushing south from Mykolaiv towards Kherson, one of the first cities captured by Russia after the Feb. 24 invasion.

After weeks of working towards an agreement to allow the resumption of vital grain exports — and less than 24 hours after a deal between Ukraine, Russia, and Turkey was finally reached — Russia launched a missile attack on one of the port cities central to the deal. Russian Foreign Minister Sergey Lavrov traveled abroad in Africa to rally support. Newly declassified intelligence exposes the horrors of Russian filtration centers.

Wielding Russia’s energy weapon, Gazprom, the state-run energy giant, announced on Monday a significant reduction to the flow of natural gas to Germany through its Nord Stream 1 pipeline.

Gazprom’s pipeline is Europe’s main supply of natural gas, providing 40 percent of the continent’s chief energy source last year. Formerly at 60 percent of total capacity, Russia has cut the gas supply down to less than 20 percent of its capacity as of Wednesday.

With the renewed cut in #natgas flows along NordStream1 to just 33mcm/d, #Gazprom is now only flowing around 113mcm/d to Europe as a whole. In a normal summers day in 2019 Europe would have typically received about 450mcm/d from Russian pipe. #TTF pic.twitter.com/95EnQ0d073

Russia claimed the shutdown was for maintenance reasons, but European and US observers say the energy cuts are retaliation for Western European nations’ support of Ukraine — and a significant escalation of tensions between Russia and the West.

“This was our biggest fear,” an anonymous US official told CNN.

European Commissioner for Energy Kadri Simson said on July 26 that there was no technical reason for Gazprom to reduce gas flows through Nord Stream 1 and that this step is “politically motivated.”

The timing of this looming energy crisis comes during a record-breaking heat wave and will complicate European countries’ ability to store fuel for the coming winter.

As a result of these cuts, gas prices in Europe are soaring. 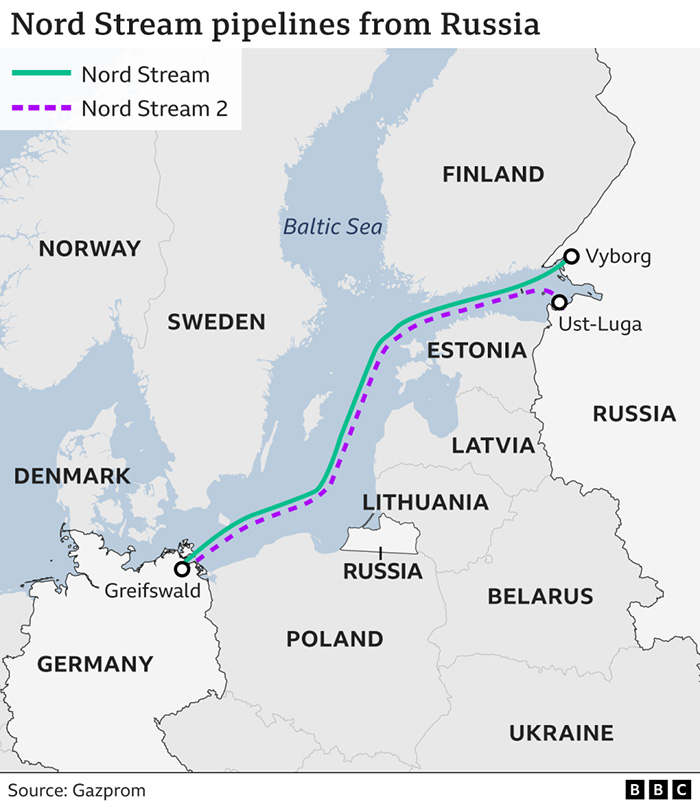 In a turn of momentum, the Ukrainian Armed Forces have launched a series of offensives around the Russian-held city of Kherson.

Kherson was one of the first cities Russia captured back in early March, and acts as a major strategic stronghold, situated on the Black Sea and near Russian-occupied Crimea.

So far, the targets have been primarily munitions depots and bridges used as essential resupply routes for Russia — including the Antonivskiy Bridge over the Dnieper River — but Ukraine is gaining ground in a fearsome push south, away from Mykolaiv.

An image from occupied #Kherson where Ukrainian resistance is active and waiting for the #UkrainianArmy:
"Occupier, go home
or HIMARS will show you the way" pic.twitter.com/AzQkLcqS5k

The bridge was attacked by Ukrainian HIMARS — heavy rockets provided by the US — and the Russians have since had to rely on the use of a pontoon crossing for resupply.

Less than 24 hours after Russia and Ukraine signed a Turkey-brokered deal to resume grain exports from Ukrainian ports, Russia launched on Saturday a major missile attack on the key city of Odesa, throwing the entire agreement — and any future pacts with Russia — into question.

“The attack cast serious doubt on the credibility of Russia’s commitment,” said US Secretary of State Antony Blinken.

Ukrainian President Volodymyr Zelenskyy said on Saturday that the unprompted attack on Odesa “destroyed the very possibility” of any dialogue with Russia.

The war has disrupted global food supplies. Ukraine is a major exporter of grain, potatoes, sunflower oil, and other staples. Before the war, Ukraine was responsible for supplying 45 million tons of grain to the global market, while Russia was the internationally leading exporter of fertilizer.

Now that both these exports have been interrupted, some 20 million tons of grain have been trapped in Ukraine, causing food shortages and prices to spike. The tripartite deal, sealed after weeks of negotiations, stipulated that food, sunflower oil, and fertilizers could be exported without Russian interference.

Despite these attacks, Ukraine plans to move forward with the grain exports, citing the importance of freeing the trapped grain and getting it to countries that are in desperate need.

Egypt, Senegal, and Kenya are all experiencing a major food and cooking oil shortage as a result of the conflict in Ukraine.

Russia Looks for Friends in Africa

Stops on his itinerary included Egypt, Congo, Ethiopia, and Uganda.

Africa- “The world is much, much richer than just Western civilization. And, many of you representing the ancient civilizations, should know about this,” Lavrov said. pic.twitter.com/j1XLTLDE1S

Many African countries have declined to pick a side in this conflict, as many benefit from exports and aid from Russia, Ukraine, the EU, and the US. Senegal, and Kenya are also notable examples who are suffering from food cooking oil shortages.

In an attempt to draw support from these countries, Lavrov has claimed that the West is at fault for the food shortages that have been massively difficult for Africa and abroad.

Egypt is heavily dependent on grain from both Russia and Ukraine to feed its population of more than 100 million.

I want to congratulate President Museveni and our entire people for hosting Sergey Lavrov, the minister of foreign affairs of the mighty Russian Federation. This was a historical visit. A first for Africa. pic.twitter.com/CcWVKZUHMt

A recently declassified report from the National Intelligence Council indicates that there are at least 18 Russian “filtration centers” near the country’s border with Ukraine — and likely “many more,” according to The New York Times.

Russian filtration centers — large detention camps that are used to process Ukrainian citizens from regions under Russian occupation — have been the sites of many disappearances and the forced deportation of Ukrainian citizens to Russia.

It is believed that Russia has “interrogated, detained and forcibly deported” between 900,000 and 1.6 million Ukrainian citizens, including roughly 260,000 children.

Russia has been using these facilities to identify possible threats in the Ukrainian citizen base that could interfere with their occupation of Eastern Ukraine. If someone is deemed a non-threat, they may be allowed to continue to live in Russian-occupied territory; however, if they pose even a resistant attitude to the occupation, they then run the risk of being deported to Russia, or worse.

In an interview on July 18 with ABC news, Mariupol resident Eduard Mkrtchian, who survived processing at one of these camps in eastern Ukraine, said: “They asked me to undress. They asked me the meaning of every tattoo on my body. They deliberated a long time whether or not to let me go. I realized that they could kill me here.” After four days, he was forcibly deported to Russia.