For Ukrainian Villagers, “Liberation” Is Temporary

KHARKIV, Ukraine — It’s the last Wednesday in April, and following a string of setbacks for the invading Russian army, we’re setting out to visit some recently liberated villages on the outskirts of Kharkiv, in eastern Ukraine, not far from the Russian border.

It’s our second try. The day before, my three colleagues and I had only managed to make it to the edge of Bezruky, 25 kilometers (15.5 miles) north of the city, when Russian artillery shells started to land dangerously close as we were interviewing some Ukrainian soldiers. The troops, who just moments prior were happily showing off a captured Russian AK-12 assault rifle, ordered us to leave as fast as possible.

While Ukraine’s counter-offensive in the region succeeded in pushing the Russians back towards the border, the handful of residents still living there had had little time to rejoice: Russian artillery pummeled the area daily in a bid to slow down advancing Ukrainian troops.

On this sunny morning, however, we are told by a contact that the situation is relatively quiet. So we decide to try our luck again and pay a visit to what had just been a war zone.

A 15-minute drive from the city center takes us to the last checkpoint before Bezruky. It appears that the situation has already deteriorated. Explosions are going off in the distance, a couple of kilometers away. The soldiers around us seem nervous.

“How is it today? Quiet or not so much?” Stanislav, our fixer, asks the burly trooper manning the checkpoint.

“I wouldn’t go there,” he says, clutching his assault rifle.

We deliberate on our next move. Bezruky is on the other side of a 4-mile-long stretch of road that runs along the frontlines. Russian artillery positions are located a mere 2 kilometers (1.25 miles) away. There is little cover on either side of the road. Only a handful of vehicles make the perilous journey at breakneck speed, the roars of their engines heard from miles away.

After weighing the risks, and unwilling to waste both time and fuel, we finally decide to proceed with our plan and start driving towards the village. A couple hundred meters up the road, the husk of a Russian Grad rocket is planted upright in the asphalt, still smoking. “It must have fallen pretty recently,” says Justin Yau, an American freelance photographer who films the scene.

After 10 very tense but ultimately uneventful minutes, we finally manage to get off the road and turn left into Bezruky. It’s a typical Ukrainian assemblage of quaint mismatched brick houses, dirt side streets, and worn-down, two-story, Soviet-style concrete buildings.

Colorful flower beds still line the streets, and lush grass covers the alleyways of the village. Only the boarded-up houses and constant rumble of artillery disturb a picturesque charm.

We drive toward the house where we had interviewed the soldiers the day prior, only to find it empty. The men are nowhere to be found.

We park the car behind a nearby concrete wall while we figure out our visit. As I peer around the corner, I see an older man strolling down the main road walking his bicycle. He is happy to talk to us, but asks to remain anonymous, fearing retaliation should the Russians come back.

The man tells us that a rocket has struck the other side of the village a couple of days prior, killing three people. “You should go and see what the bastards have done,” he says. We ask him why he decided to remain in Bezruky, despite the danger.

“If I had to die, I would have already,” he says with a blank stare, crossing himself. “Maybe I’m protected.” 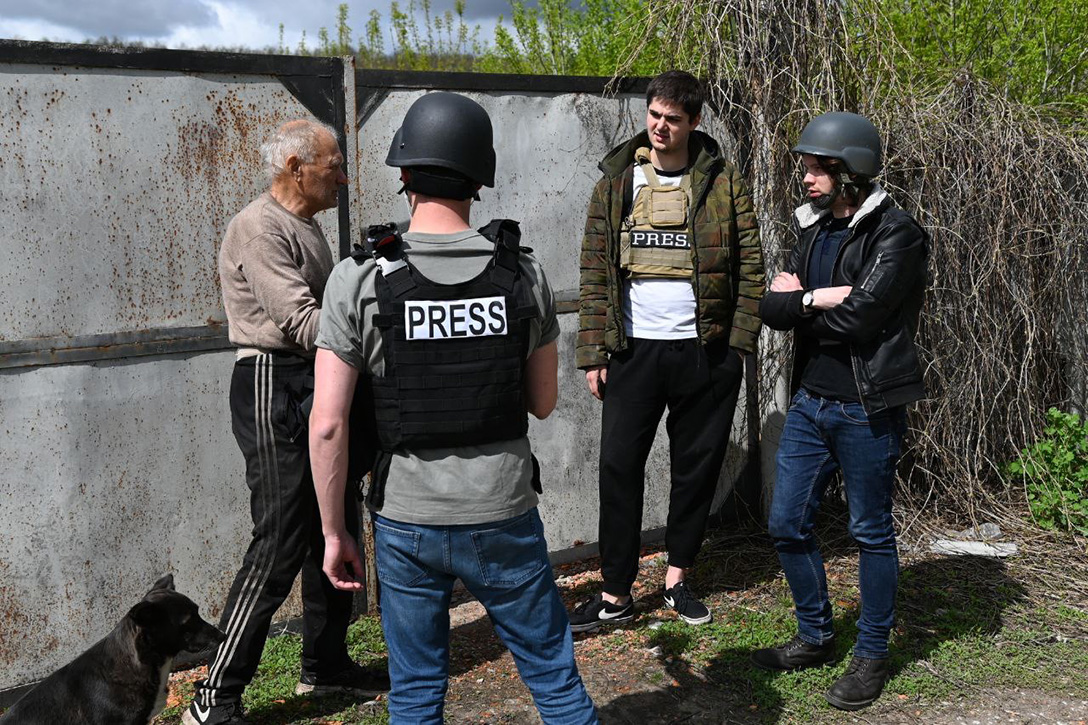 Following his directions, we drive towards the center of the village, past a group of elderly residents sitting in front of a small grocery store still open for business. Deep in conversation and seemingly impervious to the constant shelling, they wave at us as we drive by.

About a tenth of the houses are occupied, mostly by older men and women, unwilling or unable to leave the only homes most of them have ever known. Families with children are a rare sight.

We’re unable to locate the site of the strike, and decide to knock on the door of a nearby house and ask for directions. Viktor Mikolaeivich, a spry 70-year-old, comes out to greet us.

“I don’t see many people around here,” he says with a smile. The bespectacled old man is one of the few remaining residents in this part of the village. “Who’s going to feed the dogs if I leave?” he reasons.

He offers to take us on a tour of his garden, which he continues to care for despite the constant shelling.

“I am not really scared of the noise anymore, but I’m scared that the Russians might come back.”

Flanked by his two dogs, Viktor then takes us to his pride and joy, a massive greenhouse which he has built and improved over the course of 20 years. Inside, we’re greeted by a vast array of fragrant flowers and blooming fruit trees. A Red Army uniform is hanging on a shed by the entrance. By the looks of it, Viktor has been using it for gardening. 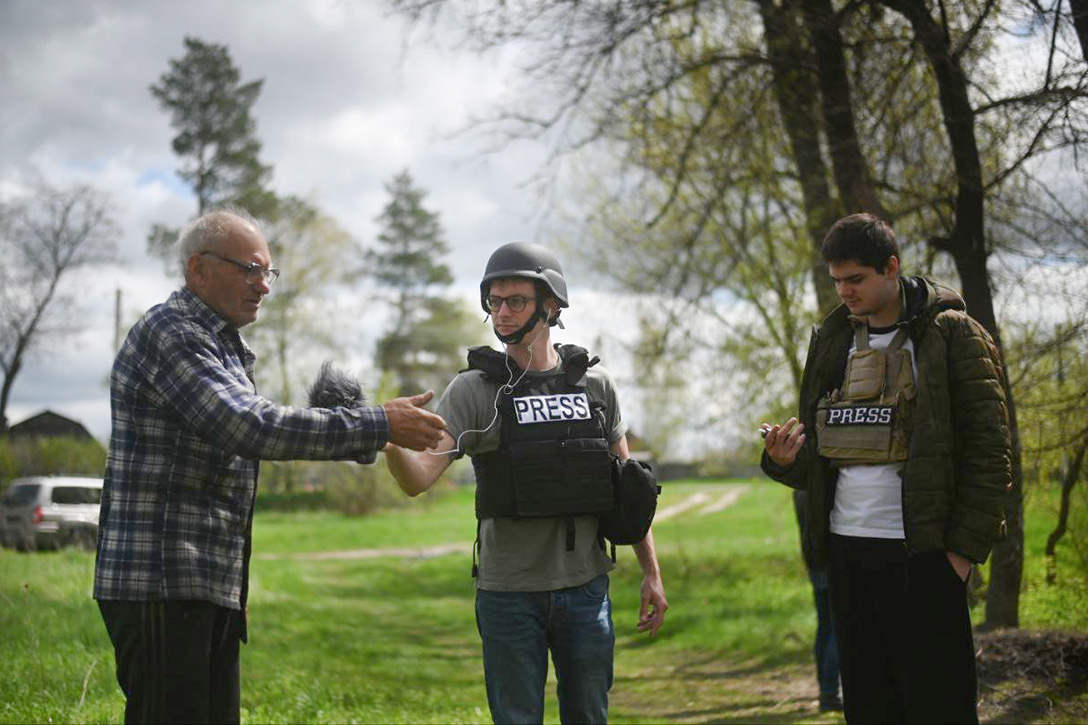 He tells us that he had served for decades as a soldier during Soviet times, then had gone on to work on an assembly line at the nearby Kharkiv Tractor Factory. While he had been ambivalent towards Russians prior to the war, he now hates them for having invaded his country.

“We have never done anything to them,” he says. “Why did they have to come?”

Throughout our conversation, the distinct sound of multiple rocket launchers echoes in the distance. After having shown us around and introduced us to his two dogs, Viktor offers to take us to the site of the missile strike. We follow him to a leafy spot nestled between the cemetery and a row of houses.

There, two craters and scattered shrapnel mark the spot where rockets struck.

“It was three old men, just minding their business,” sighs Viktor, wiping the sweat off his brow. “They died on the spot.”

All that remains there is a torn overcoat, a walking stick, and a pair of slippers.

“Emergency services took away the bodies, but people are too scared of the shelling to clean up the place.”

After shaking our hands, Viktor mounts his bicycle and heads back towards his home, his two dogs happily running alongside him.

After our conversation with Viktor, we decide to head to Slatyne, the third recently liberated village. Unwilling to take the main road and expose ourselves once again to Russian shelling, we try looking for an alternate route.

As we drive down a dirt road on the edge of Bezruky, two Ukrainian soldiers emerge from a nearby house with their weapons drawn. We identify ourselves as journalists, and after some negotiating, they agree to talk to us.

“Slatyne has been retaken by the Russians, there is no going there,” says Max, 32, in perfect English. As he says this, four explosions ring out in short succession. His commanding officer, a 27-year-old with boyish looks, lights up a cigarette, unbothered.

“The Russian artillery is working from behind the hill, while our guys are shooting from over,” explains the officer, who declined to be named. We find ourselves in the eye of the hurricane, with no fire close enough to harm us, but with rockets flying above our heads and exploding further away.

A former system administrator from Sumy, in eastern Ukraine, Max explains that for the past couple of days, Russians have been constantly pounding the three liberated villages with mortars, multiple rocket launchers, and howitzers. Our area is “quiet” enough to talk only because of its peculiar position, in-between the two sides’ artillery batteries.

“I barely even notice the explosions anymore, they don’t disturb my sleep,” he says with a faint smile.

As we speak, a beaten-up silver car comes barreling towards us. The soldiers raise their weapons, shouting at the driver to stop. The man is a local, and argues with them in Ukrainian.

“Don’t pretend you didn’t see us. We tell you to stop, you stop,” say the soldiers, who are on edge and wary of “saboteurs and recon units,” as Max explains. We ask him what he would do if he captured a Russian infiltrator.

“I’d shoot him on the spot,” he answers coolly. “I do not consider them as human beings anymore. They’re a virus that needs to be eradicated. Either they leave our land of their own will, or we’ll help them.”

Our plans to go to Slatyne foiled, we decide to part with the soldiers and return to Kharkiv.

“Glory to Ukraine!” Max shouts before putting out his cigarette. As he heads back inside, we pull back onto the “Highway to Hell.” In all, our trip takes less than four hours.