A reporter for a major Chinese media outlet covering the war in Ukraine is deliberately assisting the Russian war effort by helping to solicit intelligence on Ukraine troop movements on social media, WhoWhatWhy has learned.

Chingis Dambiev is a Moscow-based correspondent for the Ifeng Morning News, the Chinese version of Good Morning America, and a member of Russia’s Chinese ethnic minority.

Since Russia’s invasion of Ukraine began February 24, he’s been embedded with a frontline Russian military unit. He’s been broadcasting to the Chinese populace a misleading narrative of events that frames the Russian invasion in a benign light.

This mirrors behavior of other journalists working for major Chinese media, which is tightly controlled by Chinese President Xi Jinping’s authoritarian state. It highlights a disconnect between the Chinese government’s official declaration of neutrality in the conflict and reality — and raises serious questions about China’s intentions.

On a recent episode of Ifeng Morning News, Dambiev is seen interviewing a Russian soldier in the hard-hit city Mariupol, in southeastern Ukraine. Amid friendly banter, he elicits commentary from the soldier, who blames Ukraine for bombing local houses and says that this resulted in the death of an elderly woman. His reporting is strikingly one-sided, but Dambiev goes further.

Without comment or context, he reposted to his Telegram channel a request, originating  from a Russian mercenary channel, that asks the public for “information” to help complete Russia’s “special operation” — the equivalent of a CNN reporter sympathetically retweeting a rogue American military unit’s request for sensitive information while on a “freedom mission” in Iraq or Afghanistan. 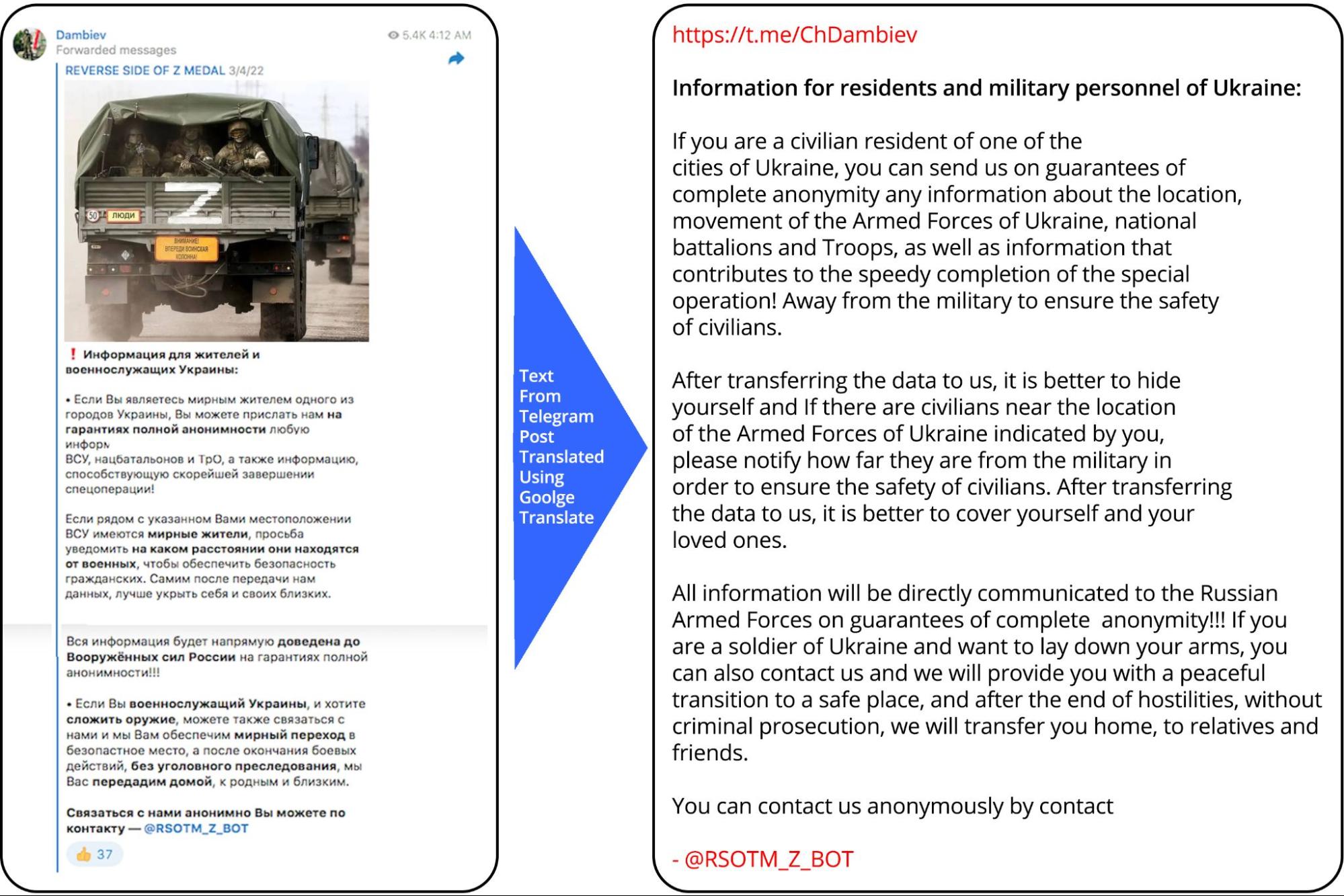 If you are a civilian resident of one of the cities of Ukraine, you can send us on guarantees of complete anonymity any information about the location, movement of the Armed Forces of Ukraine, national battalions and troops, as well as information that contributes to the speedy completion of the special operation. …

All information will be directly communicated to the Russian Armed Forces on guarantees of complete anonymity!!!

Dambiev platformed the mercenaries’ call for informants to notify them if there are civilians nearby, and to seek shelter. The post even urges Ukrainian troops to give up, offering to arrange amnesty for them and safe passage home:

If you are a soldier of Ukraine and want to lay down your arms, you can also contact us and we will provide you with a peaceful transition to a safe place, and after the end of hostilities, without criminal prosecution, we will transfer you home, to relatives and friends.

For any major network’s correspondent to do this would have been unthinkable up to now. That it is seemingly condoned by the Chinese says a great deal about the calculation the leadership in Beijing seems to have made.

Though the Chinese state is staying ostensibly neutral in the conflict, Chinese state-owned media is broadcasting a version of the war that obscures the basics of an aggressive attack by one country on another — and adheres closely to Kremlin messaging.

In this rendition, the Russian troops are there to help rescue the Ukrainian people from a neo-Nazi element, the carnage and destruction are caused by the Ukrainian side, and the analysis of the war focuses principally on economic issues.

In an essay in the institution’s journal, Dambiev advocated a “Eurasian Economic Union” between Russia, Mongolia, and China.

In other past Telegram posts and on his YouTube channel, before his Ukraine reporting, Dambiev demonstrated remarkable access to the Chinese and Russian militaries, with images of high-tech weaponry, a video of him riding on an armored vehicle, and other signs of close cooperation, if not direct coordination. (At least once Dambiev provided an object of amusement and scorn for Americans: A video he took of a malfunctioning Russian missile launch was picked up by American media.)

Dambiev did not immediately respond to messages seeking comment.

CNN found another Moscow-based correspondent, working for another Chinese outlet, Phoenix TV, operating in a manner similar to Dambiev. He also enjoys extraordinary access to the Russian military. And this seems to be part of a broader pattern of cooperation between the countries during the invasion.

Nearly 5,000 social media posts from 14 Chinese state media outlets during the first eight days of Russia’s invasion posted onto China’s Twitter-like platform, Weibo. The analysis found that of the more than 300 most-shared posts about the events in Ukraine — which were each shared more than 1,000 times — almost half, about 140, were what CNN classified as distinctly pro-Russian, often containing information attributed to a Russian official or picked up directly from Russia’s state media.

This highly active role for China in the war has yet to emerge as a major theme in a volatile situation changing by the hour.

But China’s apparent enthusiastic collaboration with Russia — and material assistance to Vladimir Putin’s war effort — as seen in Dambiev’s behavior, represents a turning point in the weaponization of the media and, perhaps, in the growing international conflagration.