To Be or Not to Be: Russia’s UN Political Appointees on the Spot

How do you act when you’re supposed to represent the world’s leading international organization dedicated to world peace and you learn that the president of the country that got you the job in the first place has turned into a paranoid lunatic, hell- bent on global destruction?  The obvious answer is that you proceed with great care and trepidation.

Tatiana Valovaya, the current director-general of the UN Office in Geneva (UNOG), is a case in point. Valovaya, who started her career as a reporter for a Russian magazine focusing on economics, doesn’t talk to reporters these days, unless they happen to be from a former Moscow satellite and the subject of conversation is guaranteed to be anodyne. She did give an interview to Armenia News in which she listened to the Armenian government’s standard complaints concerning Nagorno-Karabakh.

That was before Russian President Vladimir Putin launched his bloody campaign against Ukrainian independence and began bombing and shooting women and children. Since then, from Valovaya there has not been a peep. Occasionally, she, or someone in her office, sends out a brief message on Twitter — but never about anything that reflects the crisis, or the threat of nuclear destruction, her country is unleashing on the world.

Admittedly, Valovaya’s role, despite her impressive title, is pretty much that of a glorified housekeeper. According to the UN’s public information office in Geneva, her first responsibility lies in representing the UN and not Russia, even if everyone who understands the UN knows precisely who put her there. Still, her silence is deafening.

Russia’s Vasily Nebenzia at the United Nations in New York addresses the Security Council meeting on the war in Ukraine. He listened in silence as 140 members of the General Assembly condemned his government’s barbarism and deliberate targeting of civilians. Photo credit: Evan Schneider / UN

Failing to Respond to Global Concerns

Valovaya is not the only one on the hot seat these days. Vasily Nebenzya, Russia’s ambassador to the UN in New York, had the awkward fate to find himself the temporary head of the UN Security Council just as Putin launched his murderous onslaught. All Nebenzya could do was to incongruously warn the hapless victims of Putin’s violence against defending themselves. Nebenzya had to listen stoically while 140 members of the UN General Assembly denounced Russian barbarism.

The greatest humiliation of all may have been felt by Russia’s foreign minister, Sergey Lavrov. Back in 2000, when I was working in Time Magazine’s New York bureau, the editors wanted to invite Lavrov to a lunch at Le Bernardin, a posh restaurant a few blocks from what was then the Time-Life building. Lavrov and I showed up early and engaged in a few minutes of small talk. It was obvious that Lavrov was not only highly intelligent and witty, but, more importantly, it was clear that he had a perfect understanding of the United States and how it worked. Lavrov was no one’s fool. So how did he end up working for a mad man determined to become a bloody murderer?

In the defense of both Valovaya and Lavrov, it can be argued that Russia and its diplomats are not the ones who are really responsible for the unnecessary carnage that is tearing through Ukraine at this very moment. The true responsibility belongs to one man: Vladimir Putin. That said, what we — and above all the Ukrainians — are experiencing, is the downside of authoritarianism and the concession of individual rights and responsibilities to dictatorships, in which a single man’s vision can lead an entire nation, and possibly the world, down the path to ultimate destruction.

Putin may, as The Economist recently suggested, want to be the new Joseph Stalin. He may even think that he can restore the old Soviet Union’s dream of empire. Fantasies of that kind are endemic in many criminals. Stalin (the pseudonym translates as “steel”) began his career as a bank robber. Putin began as a juvenile delinquent. Life in Russia has never been easy. When one looks at Russia’s painful history, Putin is just the latest in a series of brutal leaders in a czarist tradition that dates back to Ivan the Terrible, who see murder as a legitimate function of the state. Violence begets violence and Russia’s history is one of unceasing violence. 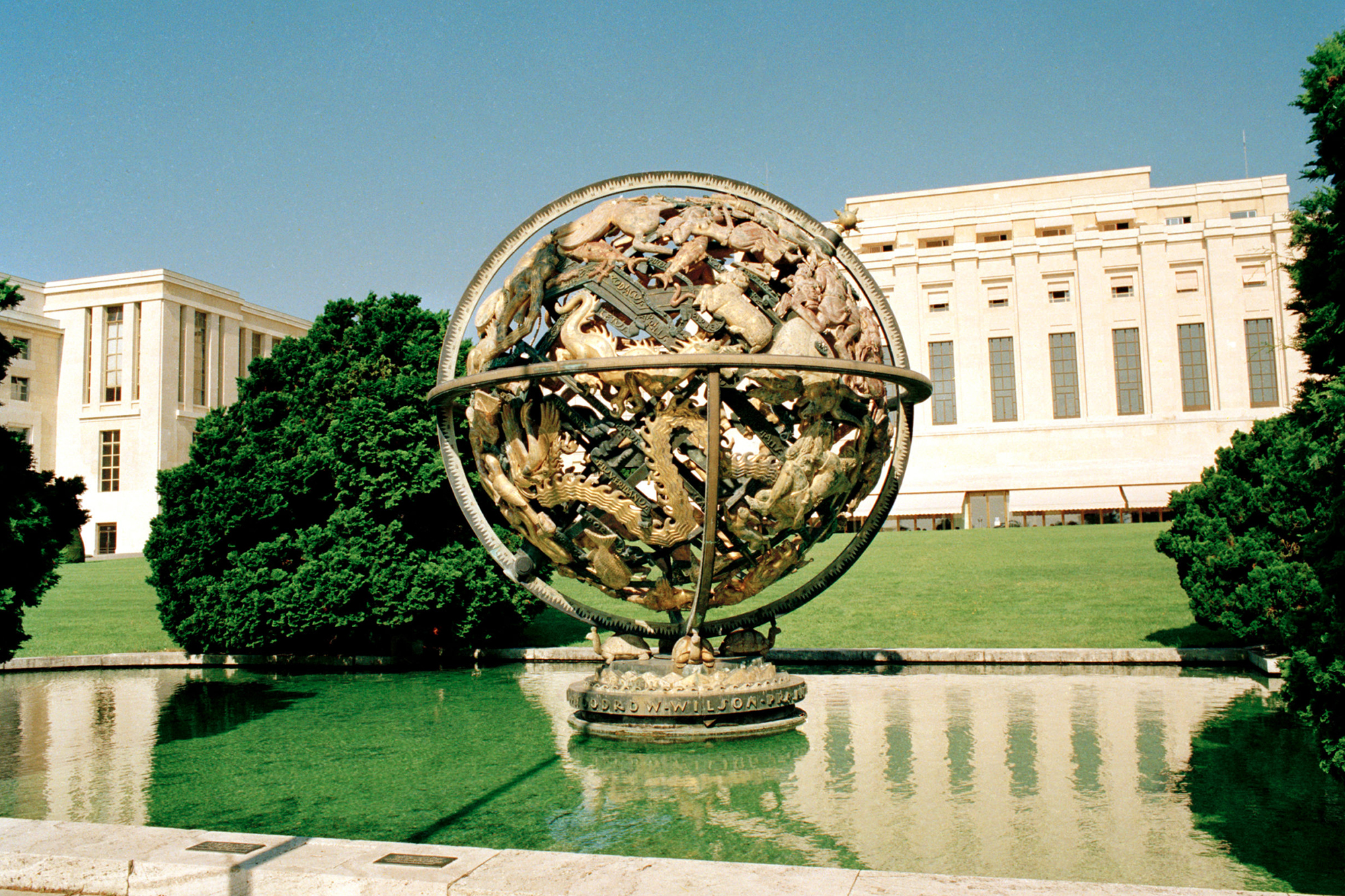 The United Nations headquarters in Geneva are located in the same building that once served the former League of Nations. The League was in the process of installing the bronze ‘Sphere of Peace’ by American sculptor Paul Manship donated by the Woodrow Wilson Foundation in front of its building on August 31, 1939. The next morning, the Second World War broke out with Nazi Germany’s invasion of Poland. Photo credit: UN

The Specialized Agencies Are Doing Their Jobs. But What About the UN Itself?

The question today is: Where does the UN fit in all this? When it was founded in the traumatic aftermath of World War II, the intention was for the conquering allies to create a global organization that could see to it that we would not go to war again. The Security Council in New York was intended to represent the organization’s ultimate power. The Russians had been de facto allies against the Axis powers, so they were included in the council charged with oversight.

Each member had a veto to make sure that any decision defining the future would be unanimous. It was assumed that everyone wanted the same thing. As it turned out, that was a mistake. Whatever Stalin wanted, it was not peace. The split was further widened when Mao Zedong succeeded in ousting China’s nationalist warlord president, Chiang Kai-hek.

What is often forgotten in all this is that in addition to the worldwide trauma resulting from World War II, much of the postwar developing world was just beginning to exit colonialism. That was a difficult enough transition, but it was further complicated by the fact that Russia, defining itself as the Soviet Union, was determined to extend its control over Eastern Europe, effectively creating a colonial empire of its own. At the same time, the United States was almost unconsciously creating its own neocolonial empire by doling out foreign aid.

Instead of working for world peace, the US and its battered Western European allies lined up on one side of the political divide, and the Soviet Union, using communism as a lure, lined up on the other. Any real power the UN might have had was effectively neutralized.

The situation was further complicated when former colonial possessions achieved at least nominal political independence. The UN General Assembly suddenly swelled to 160 members.  A voice was given to the world, but the power behind that voice was diffused in the process.

With everyone clamoring to be heard, the United States, which had regularly footed a quarter of the UN’s operating costs, began to adopt an attitude that said: “If you don’t want to play my way, I’ll just take my ball and go home.” The UN progressively found itself strapped for funds. That’s ironic, because the total cost of the UN is somewhat less than the amount that New York City spends on its metropolitan police department.

After these setbacks, the UN became essentially a talk shop, at least as far as its efforts to attain world peace were concerned. Associated agencies like the World Health Organization (WHO), the United Nations Children’s Fund (UNICEF), the United Nations High Commissioner for Refugees (UNHCR), the World Food Programme (WFP), and other organizations attached to the UN as part of the so-called “International Geneva” community have made important contributions, and in many ways are excelling in their ability to respond to the horrific humanitarian crisis that has emerged in Ukraine. But as Putin’s rampage through this now independent and democratically -elected former Soviet republic demonstrates, the goal of guaranteeing an end to war has provend elusive. 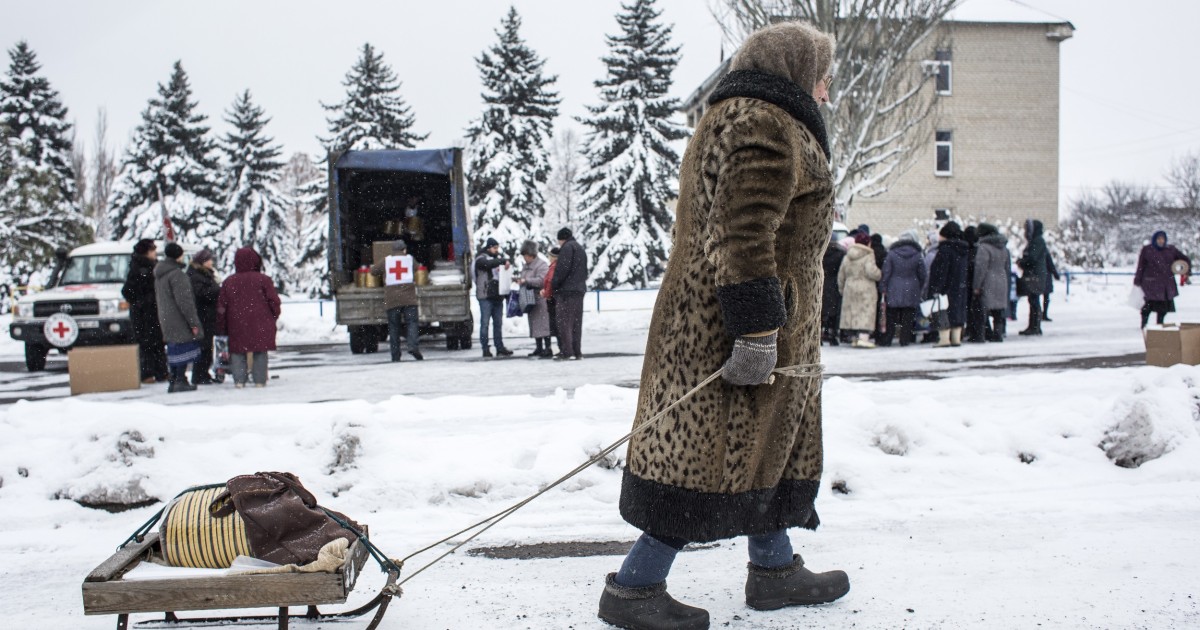 Reform or Fail: The Need for Professionals, Not Politicals

The UN also suffers from an initial mistake. With the best of intentions, it felt obliged from the beginning to give everyone a chance at participation. As a result, qualifications and ability count less than diversity and politics. While the concept is honorable, efficiency is inevitably sacrificed for political correctness. The end result, among others, is that Tatiana Valovoya gets to call the shots in Geneva.

(Editorial note: While the former head of UNOG was Michael Møller, a Danish national and former UNHCR employee, this top Geneva position has in recent years been regarded by Moscow as a “Russian” slot. The previous three directors-generals prior to Møller were either Russian or former Soviets. Not to be outdone, the United States has long considered UNICEF, WFP and the International Organization for Migration (IOM) to be American fiefdoms, while the UK now regards the United Nations Office for the Coordination of Humanitarian Affairs (OCHA) as British.).

The former European colonies who were now lumped together under different euphemisms —  Third World, developing countries, emerging markets, and now Global South — were never really fooled by the process. They regarded the UN either as a cushy assignment in which you really did not need to accomplish much or as a convenient political dumping ground. Afraid that such and such a candidate might compete with you in your next presidential election? Make him an offer he can’t refuse and then soften the blow by sending him to Geneva where he gets tax write-offs, luxury lunches, and what amounts to an enjoyable vacation. At least he won’t cause damage at home.

Much of the UN’s Geneva headquarters is housed in the building that was the original home of the League of Nations. The ghost of the League still hovers over the building. You can sense it when you are lost in the impenetrable maze of hallways (now being radically renovated by the Swiss) that frequently lead to a dead end. The endless conferences in which nothing of importance is said are even greater proof that the more things change, the more they stay the same. The fact that the doors to the directors’ offices are bulletproof and the magnificent front entrance to the complex is permanently sealed off with riot fences, testify to the distance that the UN still needs to go in order to achieve its original objective.

(Editorial Note: While the public ranging from ordinary citizens to nongovernmental organizations (NGOs) and outside journalists used to have open access to the building (you could literally wander in and out), security concerns have more or less closed off the outside world except those with special accreditation. The irony is that the more interesting global discussions, which used to be hosted by the Palais, are now being held off-campus in the Maison de la Paix, the International Conference Center Geneva, hotels, and other locations.). 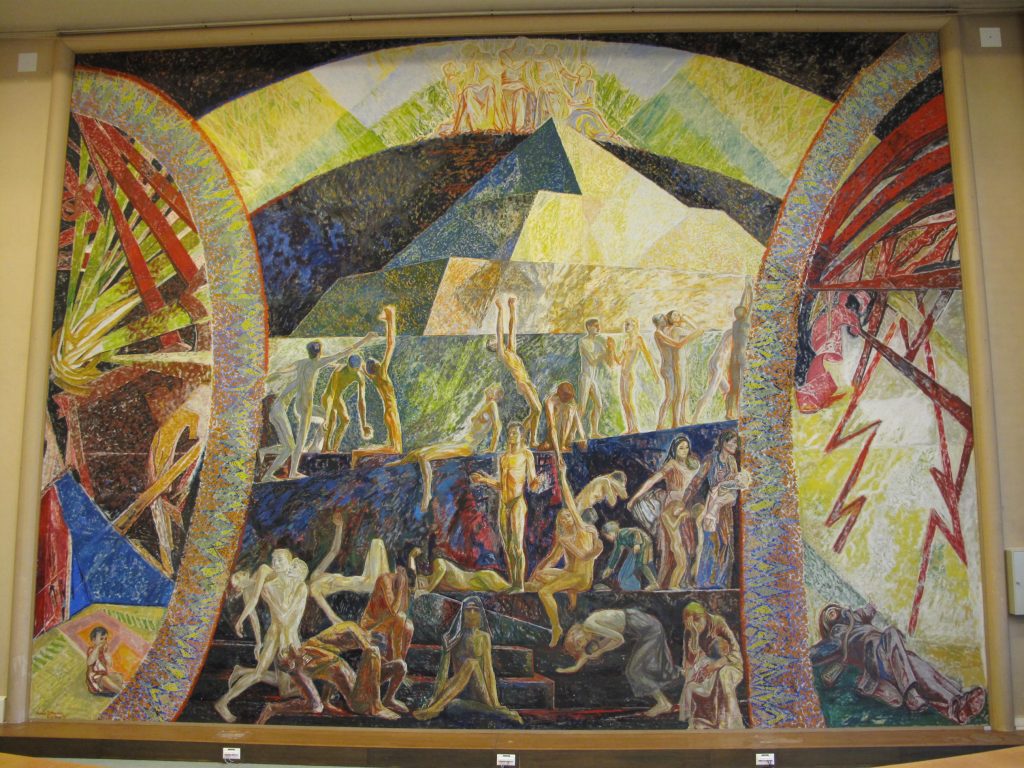 Henrik Sørensen’s unfinished ‘Dream of Peace’ at the United Nations Library in Geneva. The painting by the Norwegian artist was donated by Norway in December, 1939. Photo credit: IKFF

In one of the main rooms of the UN library, there is a mural that was painted during the old days of the League. The mural was entitled Dream of Peace. The League ran out of money as the world, threatened by Hitler, lost interest and the mural was never completed. The last thing the artist said before packing up his paints and leaving was: “There will be no world peace.” He was right. Let’s hope we survive the next one.

Foreign correspondent and author William Dowell is Global Insights Magazine’s America’s editor based in Philadelphia. He is also a contributing editor to WhoWhatWhy. ‘Tom’s Paine’ is his regular column. Over the past decades, he has covered much of the globe for Time, ABC News, and other news organizations.