There is nothing more hazardous to a democracy’s health than the belief, devoutly held by members of a faction or political tribe, that they are entitled and destined to rule.

Once this attitude takes root, one can see politics begin to work backwards from that premise — procedural corners are cut, necessary doctrines are ginned up, disinformation is spewed, and eventually, if all else fails, force and violence are brought to bear.

The American far right — whether manifest in dominionism, white supremacy, Christian nationalism, or the messianic MAGA cult that formed around Donald Trump — has exhibited alarming signs of this will to power, and this accounts for a currently widespread uneasiness when it comes to the health and survival of our democratic republic.

It is in the context of such anxiety that this past Wednesday the Supreme Court heard oral arguments in Moore v. Harper, a case viewed by legal experts as having a potentially profound negative effect on voting rights and on the conduct and, indeed, outcome, of federal elections.

Since the court accepted the case in June, it has caused a major stir among legal experts and voting rights advocates, although it likely remains barely a blip on the radar for the public at large.

In Moore v. Harper, the Supreme Court of North Carolina rejected — on state constitutional grounds — the hyperpartisan gerrymander drawn up by that state’s Republican Legislature. The question presented to SCOTUS was whether this rejection violates the so-called Elections Clause in Article I, Section 4 of the US Constitution? That clause reads:

The Times, Places and Manner of holding Elections for Senators and Representatives, shall be prescribed in each State by the Legislature thereof…

But it was an analogous clause in Article II, covering the appointment of presidential electors, that was of particular interest to Trump lawyer John Eastman:

Each State shall appoint, in such Manner as the Legislature thereof may direct, a Number of Electors [to select the President]…

Eastman rested the scheme to overturn the 2020 election on his own creative interpretation of that clause: It would enable the legislatures of states won by Joe Biden to appoint and send to Congress slates of Trump electors. 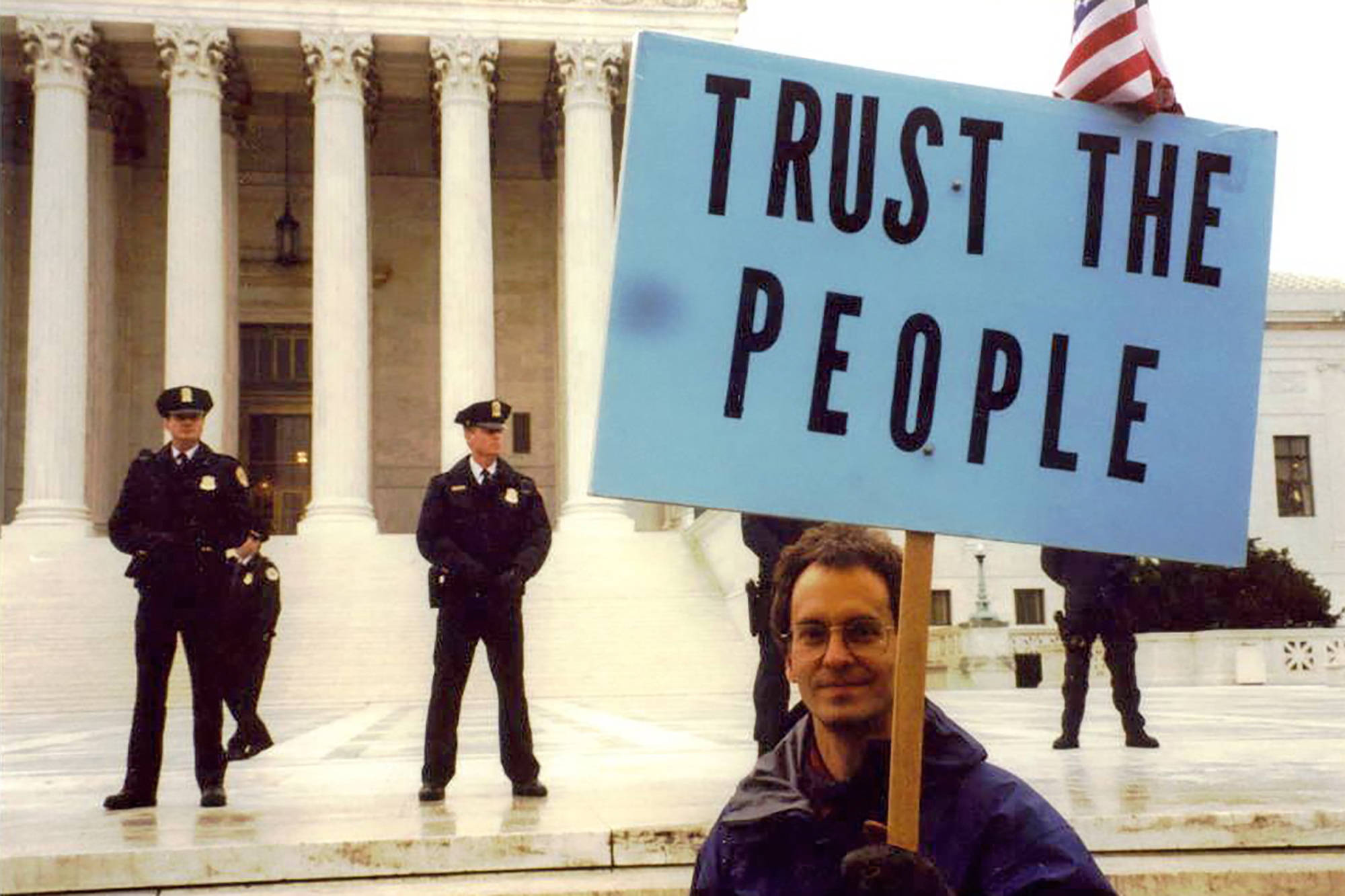 Moore has presented the right-wing SCOTUS supermajority with an opportunity to formalize such far-right woolgathering into the law of the land, via a doctrine known as the Independent State Legislature theory (ISL), long a resident of the legal far fringe.

The reasoning of ISL is that, if the Constitution vests in the state legislatures control over the manner of conducting federal elections and appointing presidential electors — and if that control is read as exclusive — then there is no role for the other branches of a state’s government in reviewing the legislature’s actions.

Even if such actions are in violation of existing law or the state constitution.

Essentially the ISL doctrine insists that two constitutional clauses that have been read formalistically (indeed almost decoratively) throughout the history of our republic suddenly be supercharged with a sweeping new power.

Weirdly and inconsistently, it is the power to obliterate, with regard to all-important elections, the very system of checks and balances at the state level — state court review and governor’s veto of legislation; citizen-passed amendments to the state constitution — that the US Constitution envisioned and enshrined at the federal level, a vital and enduring system established with the help of early landmark SCOTUS decisions such as Marbury v. Madison.

A Court With 69 ‘Friends’ Takes Its Time

When the court agreed to take the Moore case, it was universally understood that it was to give the ISL theory a thumbs up or down — or perhaps sideways. The court has a full spectrum of options.

The case’s importance and complexity (fun parlor game at a Bar Association meeting: “Explain Moore in 30 seconds — Go!”) might be gleaned from the duration of the oral argument itself. At nearly three hours, orals ran three times the ordinary allotment, and a full hour more than the epochal Dobbs case that overturned Roe v. Wade.

Four justices had previously expressed varying measures of support for ISL and court watchers honed in on Justice Amy Coney Barrett as the most likely fifth vote for the theory. The court will certainly not be lacking in guidance, as an extraordinary 69 amicus briefs were filed (16 pro-ISL, 48 anti-ISL, 5 neutral).

These included submissions by groups of current and former state court chief justices; election administrators; US senators; the ACLU; the NAACP; the American Bar Association; 21 states and the District of Columbia; the Department of Justice; retired four-star admirals and generals and former service secretaries of the US Armed Forces; Republican Bush v. Gore attorney Benjamin Ginsberg, and former California Gov. Arnold Schwarzenegger (R) — all in opposition to ISL.

Most of the ISL-supporting briefs were filed by familiar right-wing bastions such as Citizens United, the American Legislative Exchange Council (ALEC), and 2020 election denier John Eastman’s own Claremont Institute.

Numerous expert commentators were quick to point out that a “bad” decision in Moore could work to invalidate literally centuries of settled state-level law, and engender electoral “chaos” as soon as 2024. Some, like conservative former jurist J. Michael Luttig, went further and warned:

If the Court concludes that there is such a doctrine [i.e., ISL], it would confer on state legislatures plenary, exclusive, and judicially unreviewable power both to redraw congressional districts for federal elections and to appoint state electors who quadrennially cast the votes for president and vice president on behalf of the voters of the states.

There is, of course, a practical partisan dimension to all this legal arm wrestling, one that makes such alarm-sounding from a right-winger like Luttig all the more remarkable. Put very simply, modest Democratic gains in November notwithstanding, Republicans continue to control more state legislatures — and these include critical potential swing states like North Carolina, Georgia, Wisconsin, Arizona, Florida, Texas, and Ohio, as well as red states like Iowa and Alabama, where partisan gerrymandering has an impact on the partisan composition of US House delegations.

Notably, the courts and/or governors of quite a few of these states have recently played a significant role in tempering the zeal of MAGA-dominated legislatures in drawing hyperpartisan districts for themselves and for their House delegations and in enacting extreme voter suppression provisions.

Also of note is the court’s 5-to-4 decision in Rucho v. Common Cause (2019), which effectively barred the federal courts from reviewing gerrymandering for partisan advantage, leaving state courts and governors’ vetoes as the sole brake on ever more extreme and disenfranchising legislative maps. A brake that the ISL theory and a bad Moore decision would gleefully remove, along with the hard-won reform of nonpartisan redistricting commissions created in states like Michigan by popular amendment of state constitutions.

Under ISL doctrine the (gerrymandered) legislatures reign supreme, the directly expressed will of the citizens be damned.

The court is not likely to hand down a Moore decision before June. But oral arguments often provide clues as to the lean of the justices “in play” — in this case Chief Justice John Roberts, Justice Brett Kavanaugh, and, perhaps most significantly, Barrett. It is not surprising that in a case where, before orals, experts were all over the lot on just how “dangerous” it might be, there’s been less than complete agreement in their readings of Wednesday’s tea leaves — or Rorschach blot — and assessments of the danger Moore now poses.

The dominant impression has been that the “target” justices were rather hostile to the full-bore ISL argument put forth by the attorney for the petitioner, North Carolina House Speaker Timothy K. Moore, and were probing for a “middle ground,” a narrower basis for ruling in the North Carolina Legislature’s favor without removing all checks on the power of such legislatures to control all aspects of federal elections. Prominent Democratic attorney Marc Elias, for example, seemed to breathe an audible sigh of relief.

But others — such as Michigan’s Democratic secretary of state, Jocelyn Benson, and North Carolina’s Democratic governor, Roy Cooper — cautioned that, unless the court effectively puts a stake through the heart of ISL, even a relatively narrow decision in Moore could open the door to further ISL litigation and eventually the sweeping impacts on elections that supporters of democracy have feared since ISL first reared its head.

One could be forgiven for approaching the justices’ statements and questions by taking virtually everything from the “swing” justices Barrett and Kavanaugh with a full shaker of salt. These are, after all, the individuals who, in their confirmation hearings, referred to Roe v. Wade as “settled law” and gave no indication that they would soon move to overturn it. So there’s reason to be skeptical that their questioning Wednesday was entirely sincere and a reliable indication of how Moore will be decided come June.

Beyond such concerns lurks yet another — that if the court gives the legislatures an inch, they may well take a mile.

For all the relief brought by a relatively quiet 2022 election and post-election period — pace Kari Lake — it would be premature and naive to conclude that the danger of future disruption and electoral chaos has been blunted. The Republican Party, with or without Trump, remains radicalized and many within it have disavowed neither Trump nor the belief that they are destined to rule — and that their electoral defeat can result only from fraud or faulty electoral processes.

Lacking the votes, the path to their manifest destiny then becomes one of warping the electoral process to negate the will of the voting majority. A worst-case Moore decision could directly empower legislatures to achieve that goal. But even a less than maximal assertion of the ISL theory could give the more determined legislatures what election law expert Rick Hasen referred to as a “fig leaf” — enough cover to assert their power to an extent not explicitly authorized by the court, say by appointing “alternate” slates of presidential electors.

Then we’re back in crisis mode, in the midst of a chaos that can be exploited to further undermine our democratic processes.

If Trump is the Republican nominee, one can envision, with Luttig, a more legally grounded version of 2020’s unsuccessful coup, with the swing-state MAGA legislatures providing the missing ingredient. Less dramatically, any but the narrowest of “bad” decisions in Moore might be leveraged to recast election processes in myriad ways to the decisive advantage of MAGA candidates for federal office — state courts and constitutions be damned.

This is, admittedly, a gloomy view. Many observers are less pessimistic. To be sure, our democratic traditions have thus far held strong enough that the path to power for the “destined” still runs through elections. Which is precisely why the Moore case has unsettled so many who are in the business of keeping US elections free and fair, and able to faithfully translate public will into leadership, policy, and direction — and thus sustain our democracy.

And indeed there remains great uncertainty and concern about where a court that is, after all, central to the right’s quest for power, will take us. We can but wait for the Moore shoe to drop next summer, wondering how heavy that shoe, or boot, will turn out to be.

Jonathan Simon is a senior editor at WhoWhatWhy, former executive director of Election Defense Alliance, and author of “CODE RED: Computerized Elections and the War on American Democracy.”