Press conference by Prime Minister Giorgia Meloni after a meeting of the Council of Ministers at Chigi Palace in Rome. Photo credit: © Roberto Monaldo / LaPresse via ZUMA Press
Politics

Letter From Italy: History Repeats Itself

In the Palazzo Blu, a small museum situated picturesquely along the Arno in Pisa, an exhibit on the ground floor situates Italy in an uncomfortable moment. Panels set up in an elegant room show photographs of the political ruptures that seized the city after the First World War. Called “Images from the twenty years: Pisa and the fascist regime (1922-1943),” the display shows fascist youth groups in matching jerseys performing exercises in playing fields, and older men goose-stepping in uniform with guns.

By coincidence, the exhibit opened on October 22, the same day the newly elected government took office. Giorgia Meloni, the new prime minister, looks like a blond model from a soap commercial, but she’s a hard-right figure with undeniable political skills, and she’s made no secret of her extreme views. Her Brothers of Italy party took power after making an alliance with Matteo Salvini’s far-right League and Silvio Berlusconi’s Forza Italia, creating the largest coalition government majority anyone has seen here since 1994.

Though often described as the second coming of Benito Mussolini, the 45-year-old Rome native is better understood as a more attractive Italian Trump. Her rise has made it newly acceptable to celebrate Italy’s fascist past, just as the rise of Trump legitimized many forms of racism and prejudice in the US. About a hundred miles east of Pisa, Italians have begun making pilgrimages to Predappio, the small town Mussolini came from and that houses the tomb of his family. 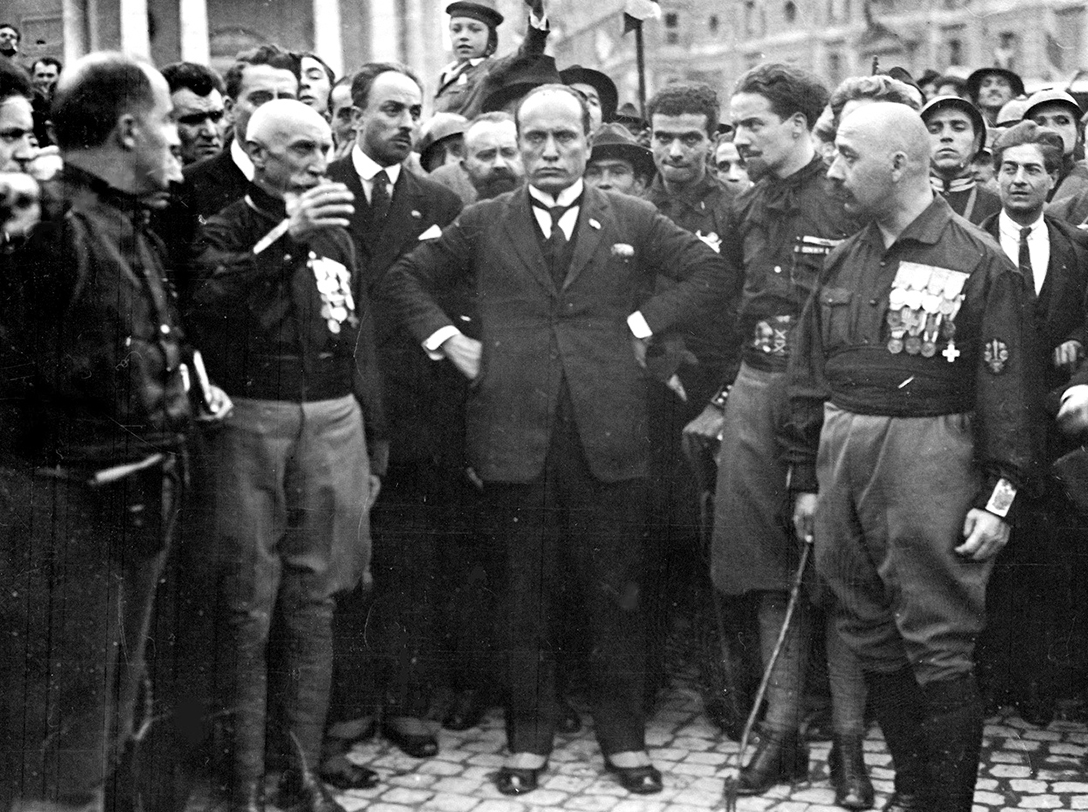 Benito Mussolini, during the march on Rome, with some of the quadruplets: Left to right: Emilio De Bono, Italo Balbo and Cesare Maria De Vecchi. Photo credit: Unknown / Wikimedia

In 1922 Mussolini’s Black Shirt followers engaged in a threatening March on Rome, culminating with a cowered King Victor Emmanuel III appointing Mussolini prime minister. As I write this, Italian neo-fascists are celebrating its centenary, and just last week hung a huge banner from a bridge in Rome depicting Mussolini in his military uniform, with the words, “100 years after, the march continues,” an event that would have been unthinkable only a short time ago. Meloni has yet to denounce these actions and is unlikely to.

Italy has a complex and brittle political history, and Meloni’s government is the 68th since the end of the Second World War. The Palazzo Blu could itself be a symbol of the country’s splintered past. The building dates from the end of the 12th century and is a stately palace where a number of wealthy families lived when the city was an important maritime power, until the build-up of silt separated the Arno from the sea. The palace has survived to become a cultural center, displaying some of the objects owned by one of the building’s final occupants, a lawyer named Ottavio Simoneschi. Besides an extensive collection of Italian paintings, including works by Guido Reni and Giovanni Battista Tempesti, the upper rooms, restored to something of their original splendor, look on to a city seemingly little changed in over a century.

It’s a mirage; with the fall of Mussolini’s regime and the advance of allied air raids, many of the city’s landmarks were lost during the Second World War. Among those was the Camposanto Cemetery, when a bomb set fire to its roof, destroying all the sculptures, sarcophagi, and frescoes inside.

A recent drive through Tuscany revealed a landscape far removed from the history of the war and the recent political upheaval in Rome. The dry weather in late October, consistently in the mid 20s C (70s F), could easily fool someone into believing it was mid summer, the olive groves and vineyards as scenic as a painting.

In Pisa, however, the political situation disturbed an otherwise benign visit to the city’s famous Leaning Tower. There’s a gesture you see all tourists display: a raised arm to be perceived, in a photograph, to be holding up the errant tower. This trompe-l’œil effect must go back to the advent of the box camera, an innocent bit of fun. But in the present climate, all those arms raised reminded me of another gesture altogether, seen in those photographs at the Palazzo Blu of the country’s beleaguered past, and beginning to be seen again all across Italy.