A Ukrainian soldier checks the documents of a local resident of Verkhnotoretske, in Donetsk. Photo credit: UNDP Ukraine
International Ukraine

The Current Ukraine Crisis Is the Result of a Long, Complicated History

How did the breakaway territories of Ukraine — the self-proclaimed Donetsk and Luhansk “people’s republics” — gain their independence? The story behind Russia-backed Ukrainian regions explained.

A few months into the Ukraine crisis, Russia’s brinkmanship on the Ukrainian border is a far more serious affair than anyone expected. What nearly everyone thought was Russian President Vladimir Putin’s bluff has turned into a full-scale war with thousands of casualties among civilians and military. The invasion started with Russian troops entering the Donbas breakaway territories that share a border with Russia. After Russia’s equivalent of a parliament, the Duma, passed a decree recognizing the republics, Putin officially recognized the republics as independent. That gave Russia carte blanche to send Russian “peacekeeping” troops to the breakaway territories, where most of the population is ethnically Russian.

Now that Putin’s assault on Ukraine has turned into a full-scale invasion, it’s obvious that protecting Russian-speaking citizens in the Donbas region was nothing less than a pretext to declare war against all of Ukraine. On February 18, the leaders of the breakaway republics announced a mass evacuation of women, children, and the elderly to Rostov-on-Don, a small Russian town on the border. In a video purporting to be made at the time of the evacuation, the leader of the Luhansk People’s Republic urges civilians to evacuate to Russia. The speaker cites an alleged attack by Ukrainian soldiers against Russian-speaking citizens earlier that day as inciting the evacuation. According to Bellingcat, metadata posted on Telegram revealed that the video was recorded two days prior to its publication; the story about a supposed Ukrainian attack had apparently been fabricated in advance.

This is a chronological account of the events leading to the emergence of the separatist republics to establish a context for the biggest political crisis in Europe’s contemporary history and to show how it turned into a full-scale war eight years later. 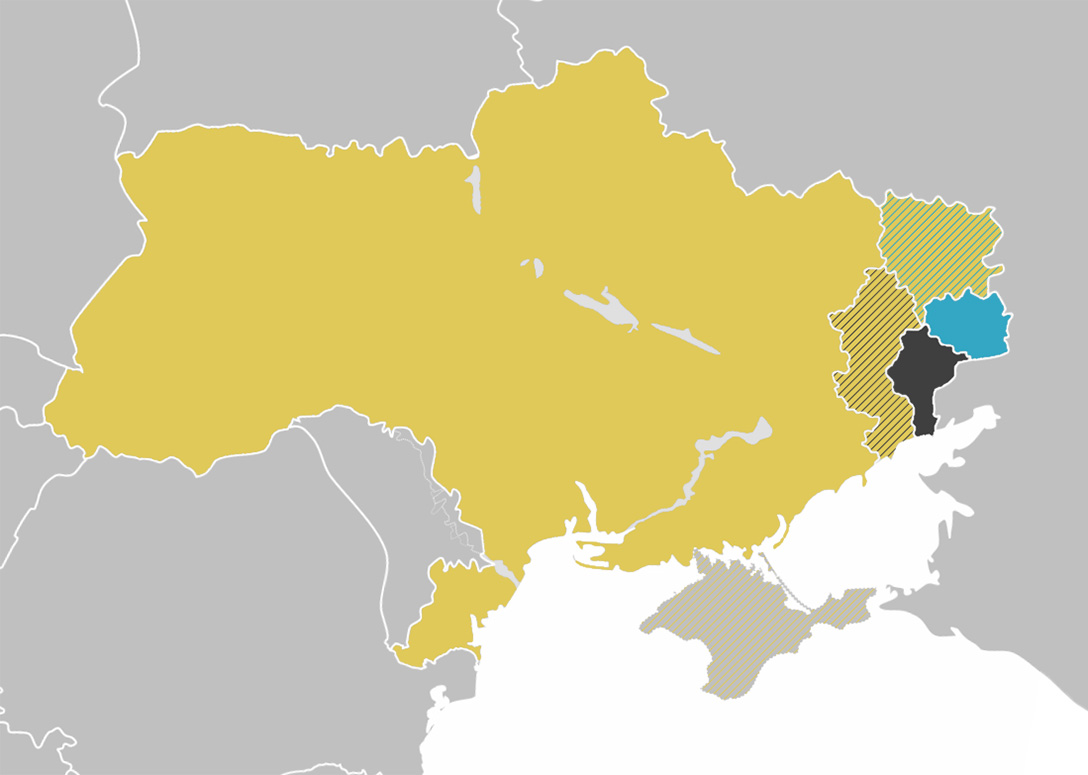 The events that triggered the current crisis date back to November 2013, when the then-president of Ukraine, Viktor Yanukovych, abruptly rejected Ukraine’s efforts to join the EU and to ally itself more closely with Europe. Yanukovych’s sudden re-alignment with Russia was a shock to pro-European Ukrainians, many of whom joined protests in the hopes of reversing the decision.

The protests led to the largest revolution in Ukraine’s modern history, larger even than the Orange Revolution of 2004–2005. Demonstrators built a campsite on Maidan Nezalezhnosti and stayed there for months, refusing to leave the square. What had started as a peaceful protest quickly escalated into a violent confrontation between demonstrators and the police. It didn’t take long for security forces to begin shooting protesters. Violence by the police led to even more people protesting, and in February 2014, Yunokovych fled the country, going into exile at Rostov-on-Don.

Russia had previously accused the US of orchestrating the Orange Revolution, and after Yanukovych’s departure, it stuck with the narrative that disruption in Ukraine was the result of “foreign influences.” That message was relayed by a ferocious propaganda machine and circulated by Russian state-owned media. Within two months after the start of the Maidan Revolution, the narrative had been transformed into a claim that the uprising had been solely instigated by the US State Department. That interpretation conveniently ignored the thousands of ordinary Ukrainians who had supported the protests.

Regardless of the cause of the protests, it was clear to Moscow’s strategists that losing control over Ukraine posed an existential threat to Russia. The European integration process inevitably risked paving the way for Ukraine to enter the North Atlantic Treaty Organization (NATO). Growing support for the protests from politicians, public figures, and intellectuals legitimized the uprising in the eyes of Western countries and prompted Russia to act.

Once it realized the potential threat to its national security, Russia’s response was swift and cold-blooded. Putin deployed “peacekeeping” troops or “little green men” (soldiers wearing unmarked green military uniforms) in Crimea — a disputed territory that once belonged to the Soviet Union. Nikita Khrushchev had given away Crimea to Ukraine on February 19, 1954 — the gesture was intended to gain the support of the Ukrainian Communist Party elite and help confirm Khrushchev’s hold on power following Stalin’s death from a stroke a year earlier. At the time, hardly anyone noticed the transfer of ownership. There was a very brief announcement at a meeting of the Presidium of the Supreme Soviet of the USSR that was later published in the Soviet newspapers.

The publication of the classified Communist Party documents in 1992 revealed two primary reasons for Khrushchev to decide to hand over Crimea. The first rationale was his need for political support in order to replace Stalin and become his official successor. The second reason was the need to solidify influence over Ukraine. For Khrushchev, turning the financial burden of Crimea over to the Ukrainian Communist Party seemed like a viable solution to the economic hardship Russia was experiencing at the time. Official Soviet documents disprove the widespread belief that Crimea had been given away on a whim. It had, in fact, been a well-thought decision, conceived by Stalin’s inner circle several years before his death in 1953.

Russian troops entered Crimea on February 24, 2014. The political crisis that resulted and that prompted the predominantly Russian-speaking regions to demand autonomy intensified ethnic divisions throughout Ukraine. Two months after the annexation of Crimea, civil unrest broke out in the eastern cities Donetsk and Luhansk. In April, after separatists had repeatedly seized local government buildings, they proclaimed themselves republics and appointed new leaders amid objections from Kyiv. Numerous volunteers from Russia went to the Donbas region to fight against the Ukrainian army. In May, the leadership of both republics held a referendum to declare autonomy from Ukraine. After self-declaring their independence, each of the republics adopted its own constitution.

By September 2014, the separatist republics had gained enough political weight to partake in the official negotiations between Ukraine and Russia that took place in the Belarusian capital, Minsk. Representatives of Russia, Ukraine, the Organization for Security and Co-operation in Europe (OSCE), and the Russia-backed republics eventually agreed upon the Minsk Accords that laid out a plan for diplomatic de-escalation of the conflict. The plan included a ceasefire, prisoner exchanges, withdrawal of heavy weapons, and full Ukrainian government control of the state border. Despite its thoroughly written provisions, the agreement was violated on multiple occasions and used mostly as a means to manipulate opposition.

What’s at Stake for the Key Players?

After exhausting all the diplomatic options, world leaders threatened Putin with a wide array of sanctions, including trade and financial measures that promised to significantly affect Russia’s financial sector and target its elites, especially those close to Putin.

On February 21, following Putin’s announcement recognizing the independence of the breakaway republics, President Joe Biden threatened Russia with financial and trade sanctions. With Biden’s approval rating at a low point, hovering around 41 percent, a firm stand against Russia promised to be a way for Democrats to bounce back. In early February, Biden explicitly stated that he would not send troops to Ukraine, citing the absence of US national interests in Ukraine along with the likelihood of causing a new world war. Biden assured everyone that while avoiding “direct confrontation with Russia,” the US “will defend every inch of NATO territory.” He pledged to “respond forcefully” if Russia were to target Americans in Ukraine. At the same time, he announced, the US was planning to deploy troops to several European countries including Poland, Romania, and Germany, and he promised to send Ukraine more military aid.

This is not the first time the US has tried to boost Ukraine’s military strength: Three US administrations — Barack Obama’s, Donald Trump’s, and now Biden’s — have been supplying the Ukrainian government with military equipment since 2014. 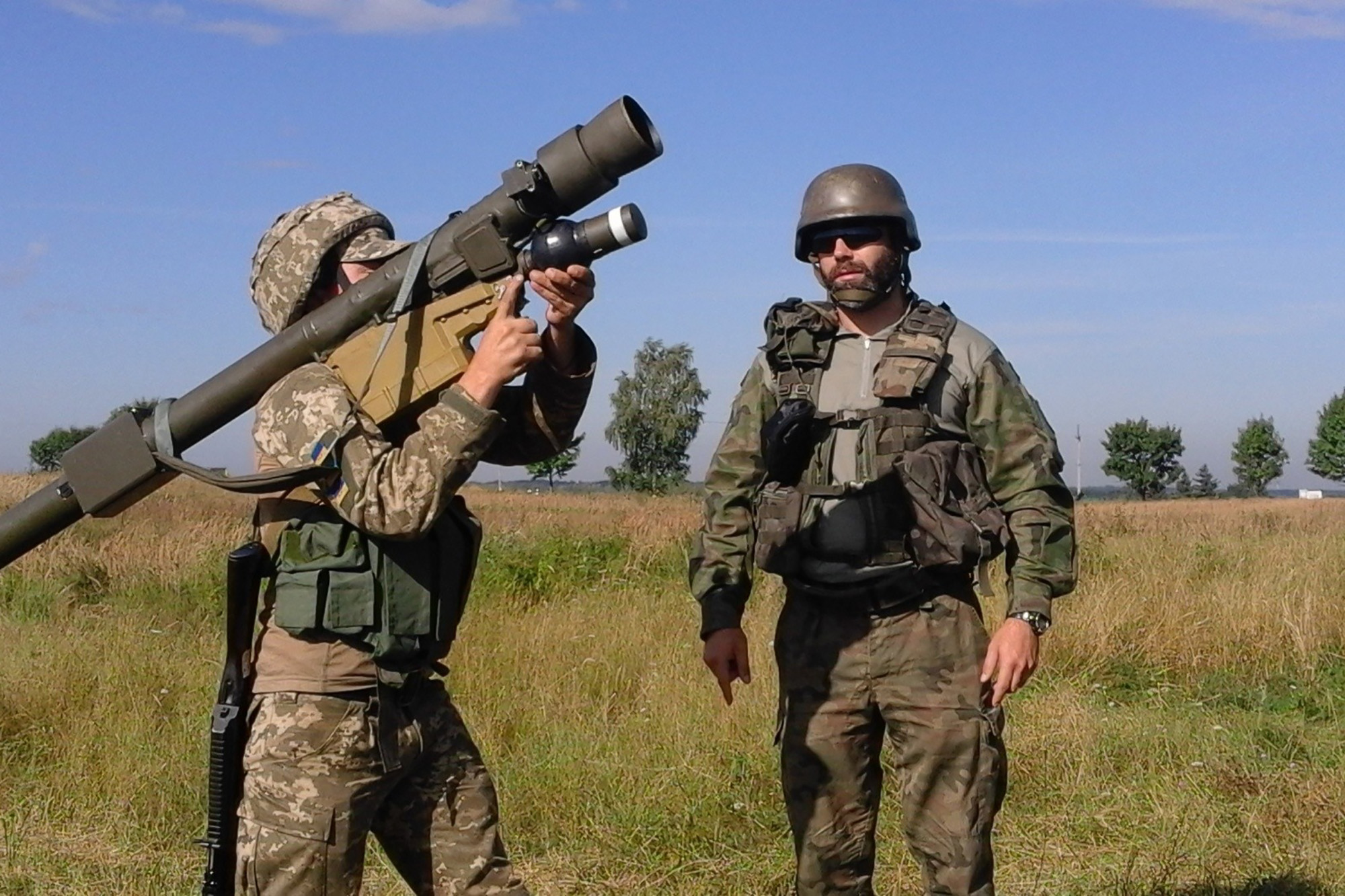 A Polish instructor assigned to the 21st Podhale Riflemen Brigade instructs a Ukrainian Soldier how to fire the 9K333 Verba portable air defense missile system, August 9, 2021, at the International Peacekeeping and Security Centre in Ukraine. Photo credit: US Armey

France also has its reasons for becoming involved in Ukraine’s future. President Emmanuel Macron needs to bolster political support before an upcoming presidential election on April 10. Solidifying his image as an assertive international leader just might earn Macron a few critical percentage points among indecisive voters. Like Biden, Macron has taken a firm stance on Russia, pushing hard for a diplomatic solution. Days before the invasion, Macron made a call to Putin to discuss diplomatic avenues to prevent the war. In the conversation with Macron, Putin cited “provocations” from Ukrainian soldiers along Ukraine’s border as a reason for the recent troop buildup around the country. France suggested engaging in talks that would involve Russia, Ukraine, France, and Germany and would hopefully serve to de-escalate the situation in Ukraine. The offer did not get very far.

In the same vein, British Prime Minister Boris Johnson has not pulled any punches when it comes to Russian blunders — like the poisoning on British soil of Russian intelligence officer Sergei Skripal and his daughter, Yulia — or international turmoils like the annexation of Crimea and the subsequent hybrid war in eastern Ukraine. Johnson’s time in the office is hanging by a thread, and his ratings have dropped precipitously. Taking a front seat by restraining Russian aggression would present him as a confident, strong world leader and would help deflect attention from his domestic issues. Like Biden, Johnson promptly announced a series of sanctions against Russia, targeting individuals and banks following the invasion of Ukraine. The UK Foreign Ministry also announced that the sanctions will target those lawmakers in Russia’s State Duma who voted for the recognition of the separatist republics.

The main point of concern for Germany and its recently elected chancellor, Olaf Scholz, is Nord Stream 2 — a natural gas infrastructure project involving Russia’s Gazprom and a number of European countries that is intended to let Russia distribute gas across Europe. The pipeline runs from Russia to Europe under the Baltic Sea. Earlier, Scholz defended the project as belonging to the private sector, and he argued that it should be separated from geopolitics. Nord Stream 2 was finished in September and was expected to enter service after receiving approval from German regulators. Putin’s decision to invade Ukraine effectively left Germany with no other option than to suspend its involvement in the pipeline: Scholz has now confirmed that Germany will freeze the certification process due to Russian aggression. While announcing new sanctions on Russia, Biden also pledged to do what he could to halt the pipeline, saying he would “ensure that Nord Stream 2 will not … move forward.”