A group of men use flashlights on their phones to provide light during a blackout in Beirut. Severe fuel shortages lead to frequent power outages. Photo credit: Hunter Williamson for WhoWhatWhy
Apprentice Stories International

Rearranging the Deck Chairs on the Lebanese Titanic

Faced with growing unrest amid an epic economic crisis that has led to mass emigration, the billionaire prime minister of Lebanon took to a podium inside the Baabda Palace to deliver a long-awaited announcement: A new government had at last been formed.

“​​I hope we will rise with this government and at least stop the current collapse and restore Lebanon to its glory and prosperity,” said Prime Minister Najib Mikati.

Ever since the resignation of the previous government following the massive Port of Beirut explosion in 2020, Lebanese have hoped and waited for a technocratic Cabinet — rather than the traditional sectarian one — to resolve the economic crisis and enact reforms to what is largely seen as a corrupt and preferential political system.

Yet the one announced Friday by Mikati, a businessman who himself was charged with corruption two years ago, seems anything but technocratic. Indeed, to many critics, it is nothing more than a return to the same old system: a corrupt, sectarian political establishment dominated by the Iranian-backed Shia militant movement Hezbollah and its political allies.

“This government reflects the reality of the political order in Lebanon, which is a Hezbollah-dominated order with junior partners in the sectarian oligarchy,” said Tony Badran, a research fellow at the Foundation for Defense of Democracies. 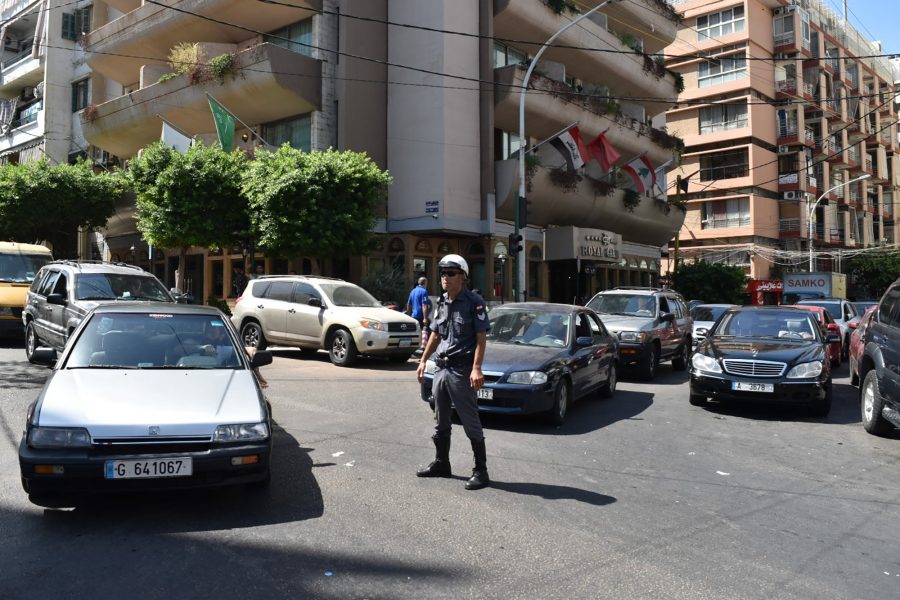 An officer directs traffic outside a gas station in Beirut. Long lines outside gas stations regularly cause severe traffic. Violence has also erupted at gas stations throughout the country as citizens desperately try to acquire fuel. Photo credit: Hunter Williamson for WhoWhatWhy

As if the announcement were not disappointing enough for many Lebanese, Mikati — considered one of the wealthiest mean in Lebanon — also declared the end of subsidies that have helped offset high costs in a country where the currency has lost 90 percent of its value in the past two years. The only reassurance offered, a dab of sugar intended to sweeten a platter of bitter disappointment, was confirmation of plans to conduct parliamentary elections in May, which activists hope will lead to meaningful political reform.

A decree signed by the prime minister and President Michel Aoun puts Mikati at the head of the new 24-member Cabinet. He will lead the government alongside Aoun and Nabih Berri, the speaker of Parliament. Lebanon’s constitution splits power among the country’s three main religious communities: Christians are represented by the presidency, Sunnis by the prime minister, and Shiites by the parliament speaker.

During the cabinet’s first meeting on Monday, Mikati promised that the new government would work to resolve the fuel crisis along with an acute medical shortage. His statement came as the country’s finance ministry announced that Lebanon will receive more than $1 billion in Special Drawing Rights from the International Monetary Fund in the coming days.

Mikati is the third prime minister to have attempted to form a new Cabinet since the previous government resigned last year. Disagreement over the composition of the Cabinet led former Prime Minister Saad al-Hariri to resign in July.

After the port explosion, people attempted to pick up the pieces of the country, both literally and figuratively, but an investigation into the blast has encountered repeated obstacles, fuel shortages have worsened, electricity’s even more scarce, hyperinflation is more hyper, and many citizens have fled the country. Today, 80 percent of Lebanon lives in multidimensional poverty, according to a report released earlier this month by the United Nations Economic and Social Commission for Western Asia.

“There was a year of adaptation and conditioning and a return to the rhythms and tempos that they dictate. This government is the expression of it. It’s the final product of it,” said Badran. “We’re back in the beginning.”

Regaining the trust of the international community to help restore the economy will be one of the new government’s greatest challenges, said Imad Salamey, an associate professor of political science and international affairs at the Lebanese American University.

“It is doubtful that it will achieve significant changes, especially by looking at its composition you will find that almost two-thirds of the ministers in this government owe allegiance to either Syria or to Iran and Hezbollah,” Salamey said. “Only one-third are not subjugated to the influence of Iran or Hezbollah. This is another Iranian-sponsored government, though it is being camouflaged by a few independent political anti-Iran ministers. But overall this government is the same government of its predecessor that emerged with Hezbollah dominance.”

That dominance will make securing aid from regional and international countries and organizations difficult, Salamey said. 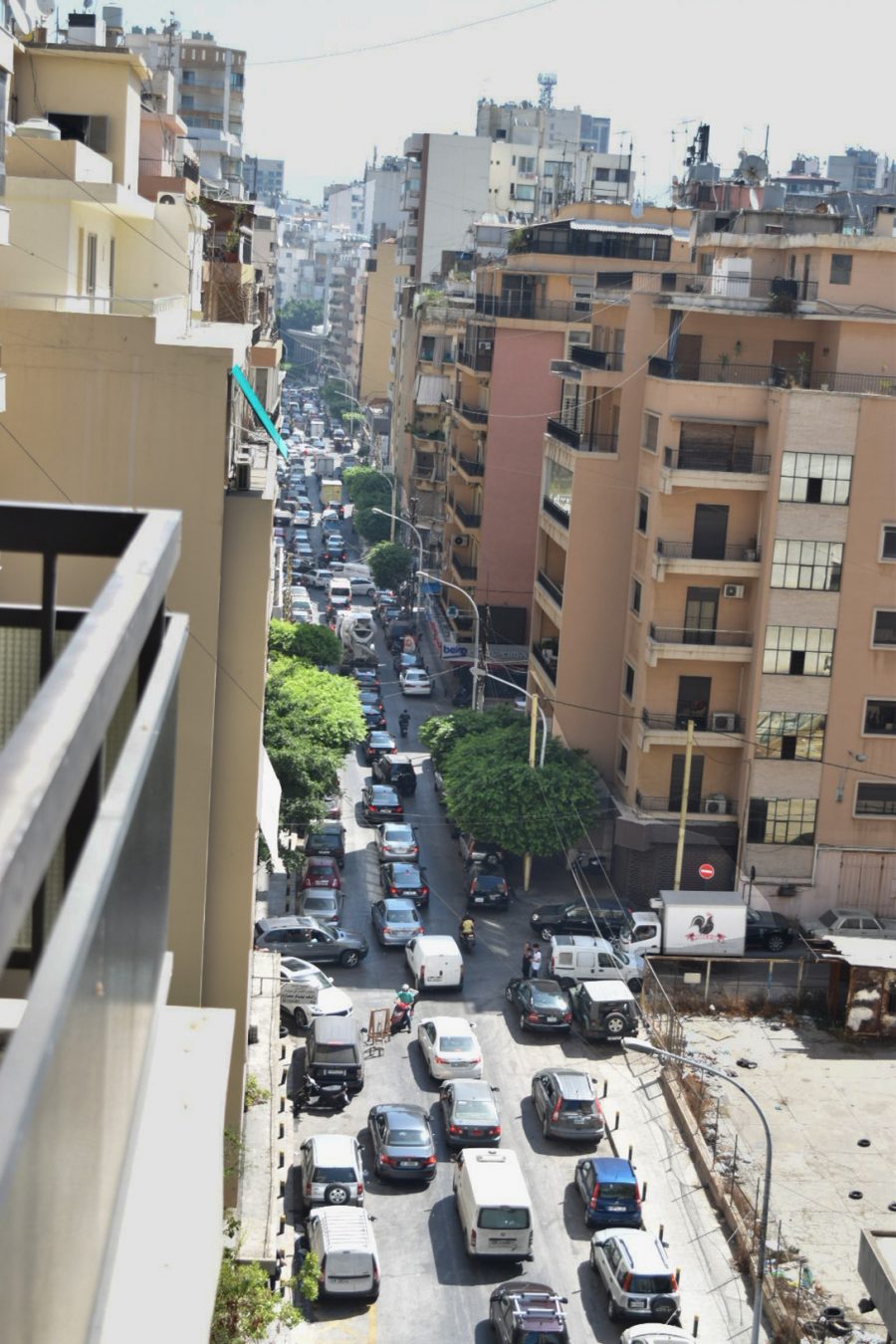 Long queues outside gas stations in Beirut have become a daily part of life. Motorists often wait several hours or more, sometimes only to be told that no fuel is left. Photo credit: Hunter Williamson for WhoWhatWhy

After a decision by the central bank last month to cut fuel subsidies led to severe gas shortages, Hezbollah’s leader Hassan Nasrallah announced the shipment of Iranian fuel to Lebanon, a move that appeared to catch officials off guard. The announcement by Hezbollah, which is frequently described as a “state within a state,” raised concerns that the US would apply sanctions against Lebanon, a decision that would further strain the ailing economy.

But instead of sanctions, the US ambassador to Lebanon, Dorothy Shea, announced the same day plans to provide Egyptian gas to Lebanon via Jordan and Syria. However, the initiative has yet to get underway, pending discussions on payments and technical reviews.

Iranian fuel tankers were reported to be heading to Syria, where the fuel would be offloaded and transported to Lebanon.

“In order to [secure international support], how this government will deal with Hezbollah will be a major highlight,” Salamey said. “Will it be able for instance to rebuff or oppose diesel shipments coming from Iran in defiance of international sanctions, or will the government allow it safe harbor in Lebanese ports? If it does this it will place it on a clashing course with the international community.”

The growing anger toward the government over worsening conditions sparked violent protests last month, with demonstrators clashing with security forces on August 4. Several days later, protesters attempted to raid Mikati’s Beirut residence. In addition, amid the fuel shortages, violence has erupted at gas stations around the country, causing deaths and injuries as people desperately try to acquire gasoline for vehicles and generators, the main power source for homes and businesses in Lebanon.

The Lebanese pound, which has severely plummeted in value, sharply rose Friday afternoon following the announcement of the new government. It fluctuated around 16,000 to the dollar on the black market over the weekend, compared to roughly 19,000 on Thursday. Prices, which have risen to match the devaluation of the pound, remain high.

In Lebanon and around the world, governments and officials welcomed the new Cabinet while also calling upon it to proceed with reforms. 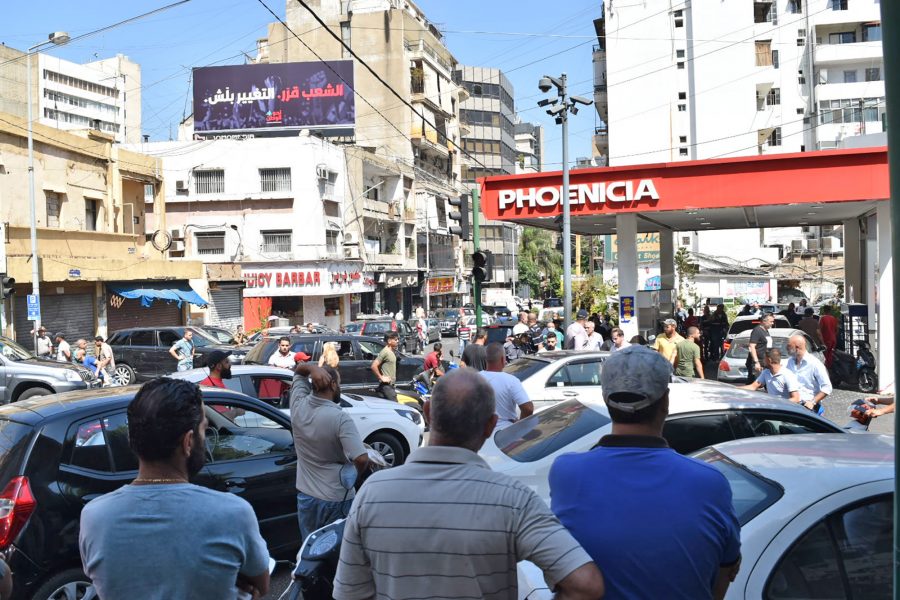 A group of men watch as motorists wait to purchase fuel from a gas station in Beirut. Photo credit: Hunter Williamson for WhoWhatWhy

“The people of Lebanon are struggling with a deepening crisis and hardship,” a UN spokesperson said. “The Secretary-General urges Lebanon’s new Government to implement a tangible reform agenda that addresses the needs and aspirations of the Lebanese people, which includes holding elections on time. The United Nations will work with the Government in this regard.”

On Twitter, UN Special Coordinator for Lebanon Joanna Wronecka emphasized the need for changes to alleviate the suffering of Lebanese.

“Pleased at the announcement of a new #government,” Wronecka wrote. “This is a first step. Swift, courageous moves are now needed in the public interest to get governance and economic reforms underway and to prepare for timely elections.”

US State Department Spokesperson Ned Price hailed the new government as “offering hope that urgent action will be taken to address the dire needs and legitimate aspirations of the Lebanese people.”

“We urge quick approval by the parliament so that this new government can get to work on concrete reforms to address Lebanon’s deteriorating economic situation,” Price said in a statement.

Critics, however, remain less optimistic in their expectations for economic and political changes.

“On a structural level I don’t think the country is fixable,” Badran said “When we talk about reforms everyone has to temper their definitions of what that means.” 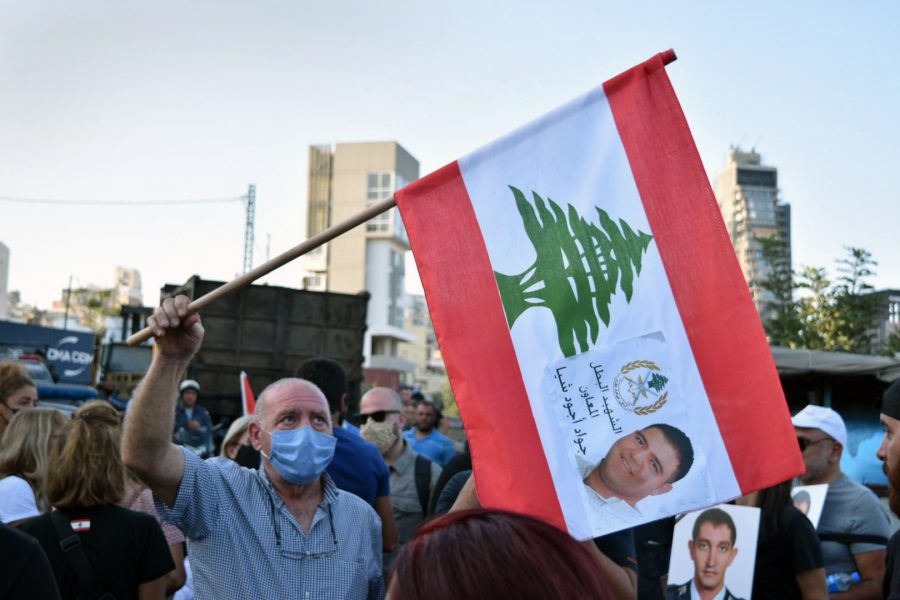 Family members of victims of the Port of Beirut explosion rallied Monday to continue demands for an investigation into the incident. Many Lebanese accuse the government and officials of attempting to obstruct the ongoing investigation. Photo credit: Hunter Williamson for WhoWhatWhy

A key issue with enacting any reform, Badran continued, is that each party, from Lebanese politicians to citizens to foreign governments, has a different conception of structural improvement.

“Reform here as a word, if you put it in these various players and contexts, it means something very different to each one of them,” he said. Furthermore, Badran added, there exists little impetus to structurally change the current system, especially since there continues to be a flow of, albeit limited, international aid and outside money intended to mitigate the impact of the economic crisis.

“It limps on and everyone has shown in Lebanon, both the leadership as well as the populace, that it can actually go a long time with limping along,” he said. “It doesn’t lead to anything other than limping along.”

Arguably Hezbollah’s dominance over Lebanon promises to remain one of the biggest challenges to recovery.

“There is no visible solution unless the question of the armed presence of Hezbollah is finally resolved,” Salamey said. “Beyond that I don’t see a solution in sight. This will only be temporary.”

At protests in Beirut Monday morning, families of victims of the port blast continued demands for an investigation and the lifting of immunities that have protected some officials from questioning.

A cool morning breeze swept over family members and protesters gathered near the port as they waited to see if Gen. Jean Kahwaji, the former commander of the Lebanese military, would appear before Judge Tarek Bitar.

Antonella Hitti stood among them. She lost her brother Najib, her cousin Charbel Hitti, and her brother-in-law Charbel Karam in the explosion.

All three were firefighters who went to the port to respond to the fire that sparked the blast.

“They had such a big heart,” Antonella said. “They loved helping people.”

Antonella and Najib were especially close. They lived together, hung out together, had the same friends, went to the same parties.

After the explosion, she and her family traveled to Beirut to locate the three men. They checked hospitals but couldn’t find them.

DNA tests of limbs would later confirm that the firefighters died in the explosion.

For more than a year, Antonella and other families have demanded justice and a proper investigation. Like other family members, she is unconvinced that the new government will handle the investigation differently.

“They’ll do the same as what everyone did before,” she added.