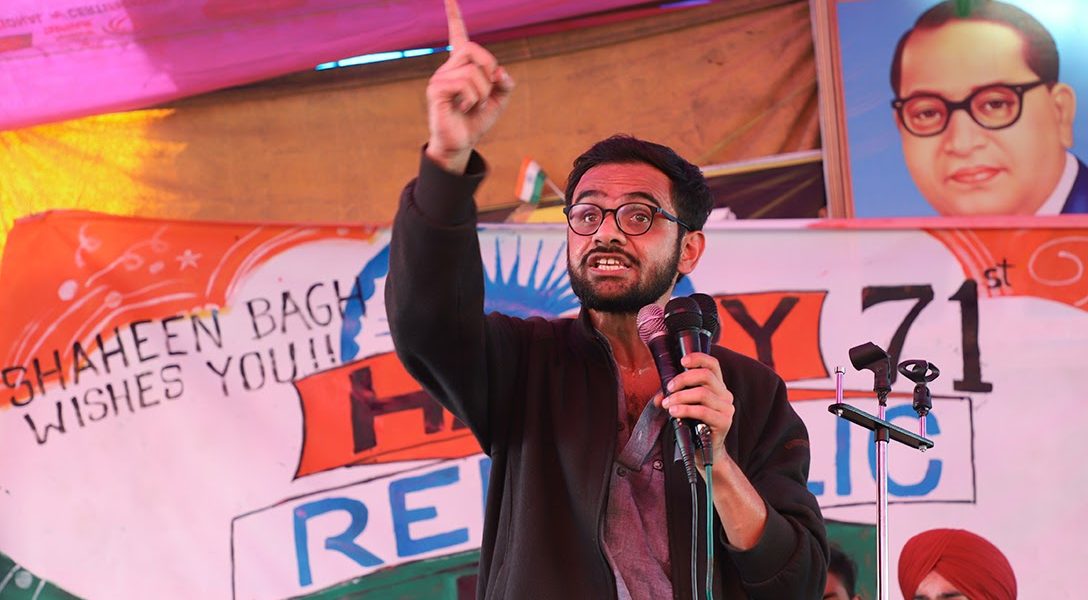 The recent arrest of an organizer of protests against India’s anti-Muslim citizenship law has sent shockwaves through the country’s activist community and the handful of unversities that have been centers for dissent.

Umar Khalid, 33, was taken into custody late on the night of September 13 under a controversial anti-terror law, the Unlawful Activities Prevention Act (UAPA), for his alleged role in violence that broke out in New Delhi in February.

Khalid, an activist with United Against Hate (UAH) and a former student at Jawaharlal Nehru University (JNU), is one of the most vocal opponents of the Citizenship Amendment Act (CAA) and a leader of demonstrations against lynchings in India. He is now one of more than a dozen activists behind bars for protesting the discriminatory nature of the citizenship act.

More than 200 educators, filmmakers, and authors, including Noam Chomsky and Indian filmmaker Mira Nair, have issued a joint statement demanding Khalid’s release. “We call on the Government of India to free Umar Khalid and all those falsely implicated and unjustly incarcerated for protesting against the CAA-NRC that denies equal citizenship rights and to ensure that the Delhi Police investigates the Delhi riots with impartiality under the oath they took as public servants bound by the Constitution of India,” the statement reads. But there has been no response from the Indian government.

What Is the Citizenship Amendment Act?

The Citizenship Amendment Act, or the CAA, bases the naturalization process on religion in defiance of the Indian Constitution’s spirit of secularity. Given its diversity, India doesn’t adhere to a state religion, but the CAA fast-tracks nationality for non-Muslim minorities from neighboring Pakistan, Bangladesh, and Afghanistan, and excludes Muslims. The CAA was passed by the Parliament of India on December 11, 2019 and sparked countrywide protests for its discriminatory nature.

“The CAA was part of the ruling party’s manifesto when they came to power in 2014,” said Sunny Dhiman, student activist and Ph.D. scholar at JNU, who was a part of the anti-CAA protests. “But the way they went through with it was a clear indication of exclusion,” said Dhiman, who likened it to laws against Jews in Hitler’s Germany.

After the law was introduced in December, nationwide protests erupted. The peaceful protests that started at Jamia Millia University, a Muslim-majority research school in the nation’s capital, spread like wildfire. Shaheen Bagh, a neighborhood in the south of Delhi, became the epicenter of these demonstrations, with students from all major universities around the country, including JNU and Aligarh Muslim University, joining in solidarity. The protests quickly attracted daily workers and housewives and common people.

This grabbed the attention of the Hindu Nationalist Bharatiya Janata Party (BJP) and Prime Minister Narendra Modi, who feared that such public mobilization would pose a threat to the government’s legitimacy. And since the movement was sparked by students, they became the inevitable scapegoat.

“People were organizing out of fear of religious biases,” Dhiman explained. “To break the movement, BJP and the conservative media started labelling student organizers as terrorists, saying they were responsible for violence. However these protests were largely peaceful, and echoed thoughts of philosophers like Gandhi’s non-violence, and Chomsky’s social organization.”

In New Delhi, the agitation took a violent turn on the eve of President Donald Trump’s visit to India. Clashes between pro- and anti-CAA protesters broke out on the night of February 23 and spread across Delhi over the next four days. Forty-two people, including a policeman and an Indian Intelligence Bureau officer, lost their lives, while hundreds were injured and shops and houses belonging to Muslims were burned or destroyed. Delhi police faced criticism for ineffective handling of the riots. Prime Minister Modi and his ruling party issued no orders to calm the violence. So the police took matters in their own hands, and hundreds of anti-CAA protestors were arrested or detained.

“Universities are safe spaces where students irrelevant to any politics they might be associated with live, our families trust we will be safe here,” said Dhiman. “But during the anti-CAA protests hostels were targeted. BJP goons were beating girls in their rooms and throwing tear gas into libraries. There were no rules, no respect,” he added.

Students were beaten, detained, arrested, and denied medical attention — on a scale never seen in the history of the country post-independence. However, none of the government backed pro-CAA assailants were arrested, despite video evidence of them throwing explosives inside schools and violently beating up students at Jamia Millia Islamia University, Aligarh Muslim University, and JNU.

So blatant is the BJP’s campaign of repression, it has been condemned by the Office of the United Nations High Commissioner for Human Rights. In a statement published June 26, a panel of UN experts urged India’s government to immediately release imprisoned anti-CAA protestors. They wrote: “These defenders, many of them students, appear to have been arrested simply because they exercised their right to denounce and protest against the CAA, and their arrest seems clearly designed to send a chilling message to India’s vibrant civil society that criticism of government policies will not be tolerated.”

“They’re attacking Khalid because he organized protests but he did nothing unlawful. He did not incite violence, he tried to educate people,” explained Dhiman. “But the government wants to brainwash people into believing in a Hindu state. That’s where the clash occurred.”

Arrest of Activists and Students in India’s Capital

Following Khalid’s arrest, the Indian police have further charged 15 people in connection with the riots. The charges were filed in a court in the country’s capital, New Delhi, and police spokesman Anil Mittal did not identify those charged. But there is talk among domestic media organizations that those charged are former members of two opposition parties, academics from JNU and Jamia Millia Islamia University. But that’s not all. Many others who were arrested are still in jail.

“They arrested so many students from Jamia, AMU and JNU,” Dhiman said, citing examples of Devangana Kalita, Natasha Narwal from JNU, and Safoora Zargar, a Jamia student who was six months pregnant at the time. Though Zargar was let out on bail because of her pregnancy after a month of being in police custody, Kalita and Narwal have not been given the option of bail.

History of Modi-Backed Violence Against Students

“In 2014, the year Modi was elected, [the] JNU student union protested the BJP manifesto as divisive. That sparked a divide between the students of JNU and BJP that continues till date,” said Dhiman.

In 2016 the Democratic Student Union, an organization of students in JNU, held a meeting to discuss the issue of Kashmir, a long-disputed region of Northern India, and the execution of Afzal Guru, who was hanged in 2013 for his role in an attack on the Indian Parliament. The meeting was to be held the day after the third anniversary of Guru’s death. The program was supposed to showcase protest through poetry, art, and music. Khalid was one of the leaders.

This set off Akhil Bharatiya Vidyarthi Parishad (ABVP), the student chapter of the ruling party, which asked for help from the Modi government and police to stop the event. Police entered the campus, unleashing violence against anyone who spoke out against ABVP or attempted to participate in the planned protest. They entered hostels and faculty residences, attacked and terrorized students and teachers, and vandalized hostel property. Eight students were charged with sedition and the students of the university were dubbed as “anti-nationals.”

After being treated for head injuries inflicted by ABVP supporters, JNU Students’ Union President Aishe Ghosh stated: “Every iron rod used against the students will be given back by debate and discussion. JNU’s culture will not be eroded anytime soon. JNU will uphold its democratic culture.”

“If anyone raises anti-India slogans, tries to raise questions on the country’s unity and integrity, they will not be spared,” Home Minister Rajnath Singh said in a statement. Since then, JNU has earned the displeasure of the government.

But Why the Crackdown on Students?

Modi’s Bharatiya Janata Party envisions India as a Hindu nation. And according to Modi, there is no place for dissent in democracy. Public universities like Jamia and JNU encourage activism and critical thinking, and cultivate politically informed students, a majority of whom go on to be educators or join the civil services. And that just doesn’t sit well with the government.

“The government is against free thinking individuals, trying to dumb down new idea by targeting universities. The government has a threefold plan to crackdown on students through identity politics,” Ghosh explained. “The targets are students who are Muslims, women and dalits — a group that belongs to the lower rungs of the caste system in India.”

Modi’s anti-democratic attitudes have been cultivated over many years of rigorous training. He rose through the ranks of the male-only Rashtriya Swayamsevak Sangh (RSS), the parent organization of the BJP. The RSS was founded in 1925 and is a prominent proponent of “Hindutva — Hindu-ness and the idea that India should be a ‘Hindu nation.’”

Students Suffer for Modi’s Vision of a Hindu Nation

The bitter relations between the Modi regime and JNU continues, in flashes, whenever there is dissent. But after the citizenship act, CAA terror was unleashed not just on JNU, but also on other universities in the nation’s capital. Now, JNU cannot be looked at in isolation. The incidents of violence in Jamia Millia University, Aligarh Muslim University, and JNU make it clear that encouraging dialogue among students on a secular platform is not only against Modi’s beliefs, but also against his party’s platform of a Hindu nation.